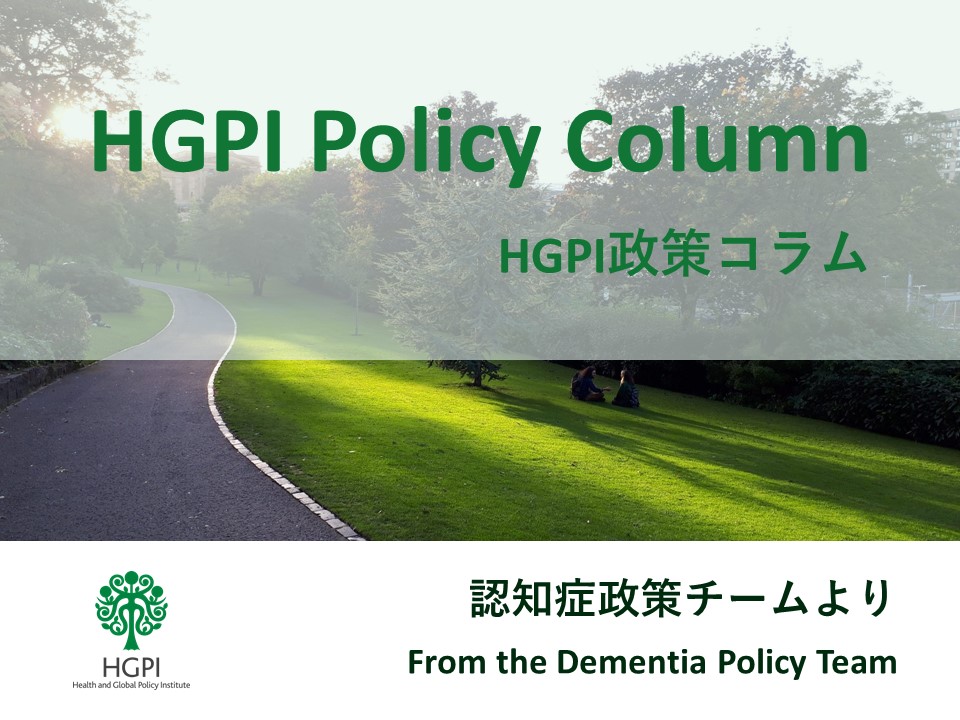 – Alzheimer’s Disease International (ADI) presented a report on national responses to dementia entitled “From Plan to Impact IV –Progress towards targets of the WHO Global action plan on dementia” on May 26, 2021.

– Only 40 countries and territories have formulated national plans for dementia. Among them, 32 are Member States of the World Health Organization (WHO). This result falls far short of the WHO’s target of having 75% of Member States formulate national dementia plans in place by 2025, and chances of meeting that target are low.

– To help ADI’s report make a greater contribution to plans for dementia in each country, it will be necessary to examine what steps are being taken to respect the rights of people with dementia or their families and to measure how much they participated in formulation processes.

In this installment of our policy column, we will introduce and discuss “From Plan to Impact IV – Progress towards targets of the WHO Global action plan on dementia,” a report presented by Alzheimer’s Disease International (ADI) on May 26, 2021. For the sake of brevity, we will refer to it as the ADI 2021 Report.

This series of reports from ADI was discussed previously in last year’s column, “The Current Position of Dementia Policy in International Society.” That column contains a more detailed introduction of ADI itself and the purpose of their annual report, so please visit the link for those details.

Progress on the WHO’s 2025 Targets Has Been Difficult

Continuing from last year’s report, the ADI 2021 Report gauges the current state of efforts to formulate national plans for dementia in various countries and territories around the world. This year’s report found that 40 countries and territories have already formulated national plans for dementia. Among them, 32 were Member States of the World Health Organization (WHO). These figures are slightly higher than those reported in last year’s report, which found that 31 countries and territories (27 WHO Member States) had strategies for dementia in place. Recognizing that the COVID-19 pandemic has lowered the position of dementia among health policy priorities around the world, ADI is taking this finding very seriously and says it will be necessary to continue promoting dementia as a high-priority policy issue. 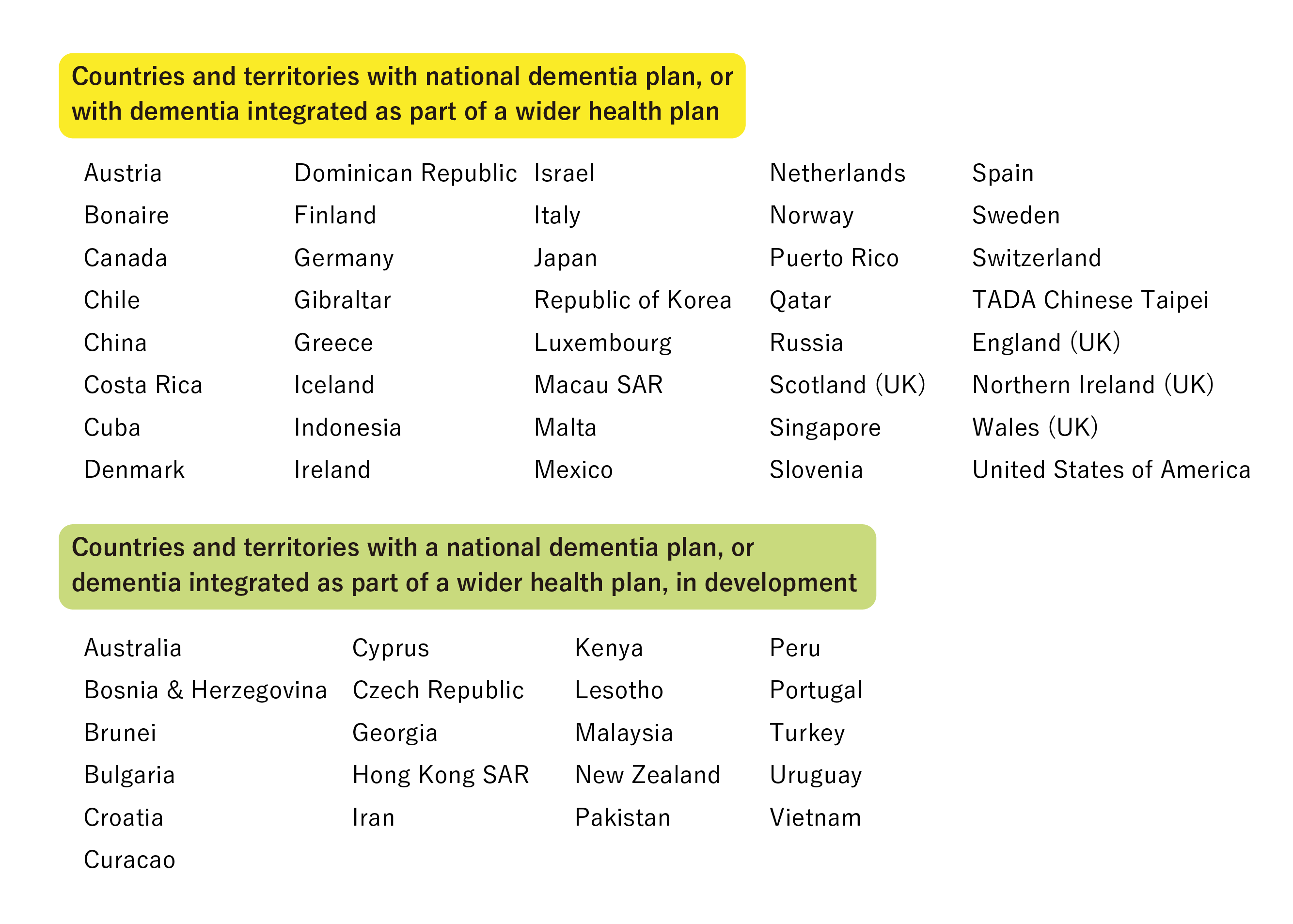 As we discussed in a column last year, the WHO Action Plan includes a target that reads, “75% of countries will have developed or updated national policies, strategies, plans or frameworks for dementia, either stand-alone or integrated into other policies/plans, by 2025.” Meeting this target means that 28 national strategies for dementia must be created annually over the next four years. It is safe to say that this is an extremely difficult situation.

Another major change introduced in the 2020 report was the inclusion of indicators to gauge the progress on each country’s national strategy. Just like last year, this year’s report broadly categorizes each country into five stages, Stage 1 through Stage 5, and arranges them into subcategories to provide a more detailed measurement. The figure below shows how national plans are categorized.

In the ADI 2021 Report, “A grouped health plan including dementia…” has been added at the end of each stage (2E, 3D, 4E, and 5C). This was added because several countries and territories have developed dementia strategies in recent years that combine measures for dementia with those for aging, mental disorders, neurological diseases, or an even wider range of non-communicable diseases (NCDs). For example, Tanzania, which was categorized as Stage 4E in the ADI 2021 Report, has a national strategy for dementia that is integrated with its plan for NCDs. Although ADI prefers for each country or region to have a separate plan specifically for dementia, it also seems that ADI is of the stance that integrated plans are acceptable as long as they are in line with the WHO Action Plan and appropriate budgetary measures are being taken.

Finally, there is one correction I must make regarding the subcategories. In last year’s column (“The Current Position of Dementia Policy in International Society”), I mentioned that the letters accompanying each subcategory indicate rankings within each stage. However, these letters are not meant to indicate ranking. Rather, they are only meant to provide a more detailed portrayal of the conditions within each stage. 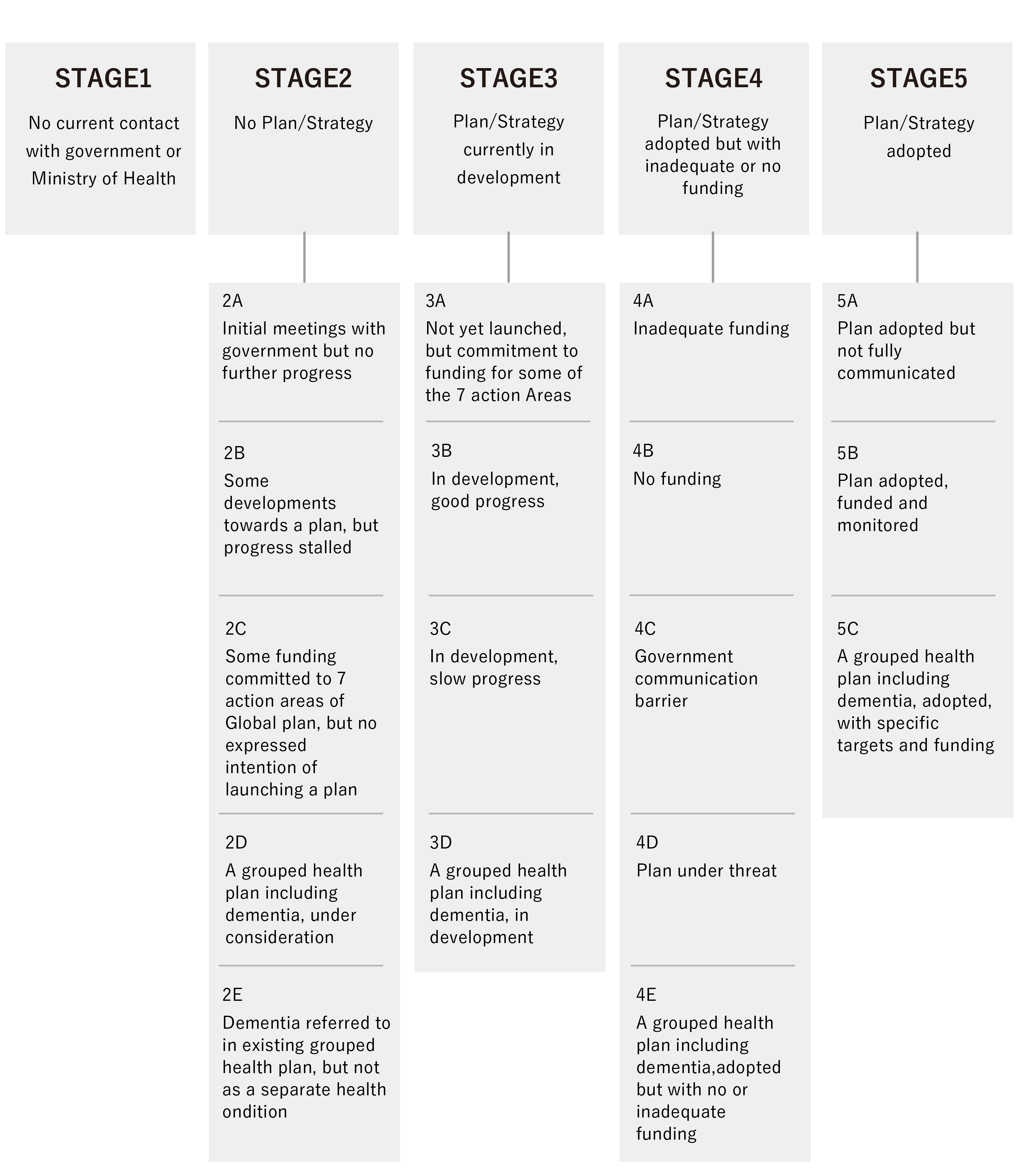 Of the 40 countries and territories that have already developed national dementia strategies shown in the previous figure, countries in Stage 5 are displayed in bold below. Comparing these results to last year’s report, we see that Chile, Costa Rica, Finland, Iceland, Ireland, Malta, and Scotland have left Stage 5, while Bonaire, Canada, China, Germany, Gibraltar, and Russia have entered it. In other words, some of the countries and territories that were in Stage 5 last year have regressed. As for the cause of this, in addition to the results of reevaluations, we think it is likely that some countries were unable to secure sufficient funding due to the effects of the COVID-19 pandemic.

Japan Progressed from Stage 5A to Stage 5B

Looking at the position of Japan’s dementia plan in the ADI 2021 Report, we see that Japan has moved from Stage 5A last year to Stage 5B this year. As we already mentioned, this change does not mean that Japan moved up a rank. If we look closely at indicator content, we might conclude that policies in Stage 5B are more substantial than those in Stage 5A.

I had the honor to serve as a contributor during the creation of the ADI 2021 Report. I was given the opportunity to submit my comments and opinions on the current situation in Japan and the assessment of its policies in advance. (My comments, name, and affiliation can be found on page 41 of the ADI 2021 Report.) When submitting my comments, I also shared our columns on the situation surrounding domestic evaluations for Japan’s dementia plan with ADI. (These were “How Should the Public React to the Policy Evaluation System in Japan?” and “Progress on Implementing and Disseminating the National Framework for Promotion of Dementia Policies.” ) Although the Government is currently facing a difficult financial situation, budgets for dementia are increasing gradually every year, and while efforts to communicate the results of domestic policy assessments to the public are still lacking, progress on Japan’s dementia plan has undergone third-party assessment from the Ministry of Internal Affairs and Communications (MIC) as well as diligent self-assessment. Given the circumstances surrounding its national plan, I would say it is more accurate to place Japan in 5B than 5A.

This is the end of our brief overview of the ADI 2021 Report and its background. For more details, please see the full report at the link provided above. By taking a detailed look at the situation in each country, organizing findings, and introducing good examples, we can see how ADI aims to increase the priority of dementia as a policy issue.

Although it is a bit presumptuous, please allow me to share some personal hopes regarding ADI’s dementia plan progress assessments in the future. I think better national dementia strategies can be developed around the world if each strategy is checked for the mention of upholding the rights and dignity for people with dementia and their families. I would also like it if the measures for protecting the rights and dignity outlined in each plan were compared. In March 2021, HGPI and Designing for Dementia presented a report on a comparative study on dementia regulations enacted by local governments and presented policy recommendations. In that study, we compared regulations using criteria such as, “There is mention of the rights or dignity of people with dementia in the preamble, stated purpose, or philosophy of the regulation” or “There is mention of social participation and roles for people with dementia in the preamble, stated purpose, or philosophy of the regulation.” I also think it would be interesting if the ADI Report compared national plans in terms of participation from people with dementia during the plan formulation process, which is another point of focus in our comparative study.

This concludes our overview and brief discussion on the latest ADI report, “From Plan to Impact IV – Progress towards targets of the WHO Global action plan on dementia.”

Works referenced
Alzheimer’s Disease International. 2021. “From Plan to Impact IV -Progress towards targets of the WHO Global action plan on dementia.”
https://www.alzint.org/resource/from-plan-to-impact-iv/