[HGPI Policy Column] No. 20 – From the Dementia Policy Team – Progress on Implementing and Disseminating the National Framework for Promotion of Dementia Policies 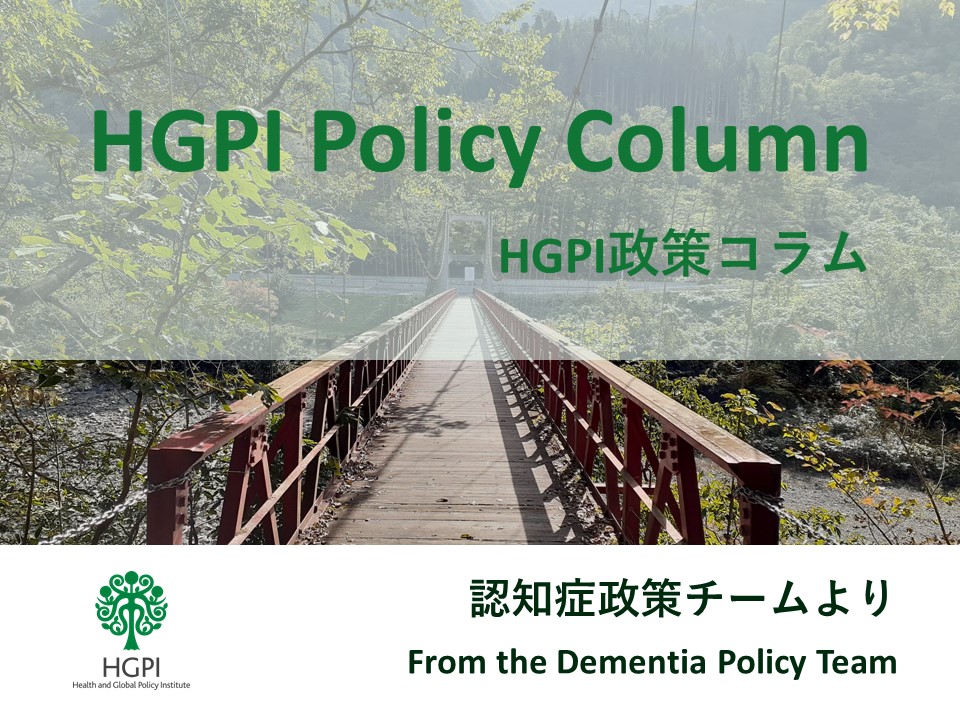 Key Points
One and a half years have passed since the National Framework for Dementia Policy was presented in 2019. This column contains a summary of its first year of implementation progress. While there are disparities in progress on each item, among priority items, progress has generally been smooth, and advances in each measure have been reviewed in an extremely thorough manner.
This column will examine advances in efforts to train dementia supporters, to establish medical centers for dementia, and to build a system for research and development for dementia.
There are certain measures for which progress is still insufficient, especially those related to communication. More proactive efforts to disseminate policy-related information regarding topics such as the implementation status of measures for dementia in Japan and overseas are needed.

Introduction
One year has passed since Japan detected its first domestic case of Coronavirus Disease 2019 (COVID-19). As of January 7, 2021, a state of emergency has once again been declared for the Tokyo metropolitan area and three surrounding prefectures (Kanagawa, Chiba, and Saitama), and the days ahead of us continue to be filled with uncertainty. In our previous column, we reexamined factors obstructing early consultations and diagnoses that were previously identified in a white paper presented by Health and Global Policy Institute (HGPI) in 2017. In this column, we will examine progress on the National Framework for Promotion of Dementia Policies, which was presented by the Government in June 2019. Not only was the National Framework for Promotion of Dementia Policies presented that year; the Basic Act for Dementia was also submitted to the Diet in 2019. It is safe to say that in retrospect, 2019 was a year in which we finally began to see progress on dementia policy in Japan. However, the impacts of COVID-19 at the end of 2019 forced delays in efforts to build social momentum. In this column, we would like to examine current progress on the National Framework for Promotion of Dementia Policies one and a half years after it was presented.

1. Awareness-building and support for communication from people with dementia
(1) Promote understanding of dementia
“Train four million dementia supporters at companies and in workplaces”
“Train 12 million dementia supporters by the end of FY2020”
The National Framework for the Promotion of Dementia Policies states that “Training courses will be expanded among those who are expected to have frequent contact with people with dementia in the community, starting with employees of retail businesses, financial institutions, public transportation facilities, etc.; as well as among children and students, who are at important life stages for personality development.” This can be taken to mean that efforts to promote awareness towards dementia will enter a phase in which they will focus specific groups rather than the general public as a whole. By the end of June 2019, about 2.6 million people in industry and the professional sector had completed dementia supporter training. In addition, as of the end of September 2019, a total of 12,773,939*1 people had undergone training as dementia supporters under the original system, clearing the 2020 target in six months. Future efforts will include the continued promotion of dementia supporter training at companies and workplaces and the expansion of dementia supporter training through the creation of training materials for online courses and a website for distributing those materials.

5. Research
(2) Building a research infrastructure
“Build a trial-ready cohort for pharmaceutical trials”
Promoting research will be another very important aspect over the long term. Although many companies have been continuously pursuing the development of disease-modifying pharmaceuticals for dementia, none have succeeded. Recently, there have been reports on the start of international clinical trials for candidate pharmaceuticals, but it will be a long wait until those pharmaceuticals are available to the public. One challenge facing pharmaceutical discovery for dementia is the development of a clinical trial system. Recently, it is believed that it is crucial to intervene during the very early stages of dementia, particularly for Alzheimer’s disease, but people in those very early stages have no symptoms or mild symptoms. Therefore, few of them visit medical institutions and it has been difficult to get them to participate in clinical trials.

One potential solution to this issue is J-TRC , a domestic research project for the construction of a trial ready cohort . J-TRC is an observational study in which online memory tests are conducted periodically among voluntary participants ages 50 to 80 who do not have dementia. Those who are found to meet the requirements of preventive pharmaceutical trials are encouraged to participate in prevention trials for Alzheimer’s disease. In addition to researching and establishing methods of diagnosing Alzheimer’s disease at very early stages, before symptoms appear, the project also aims to create a system for introducing potential participants to clinical trials for preventive pharmaceuticals for use in the very early stages of the disease.

Eventually, J-TRC and other such efforts must lead to the creation of a framework for providing large-scale research support that involves industry, Government, and academia as well as cooperation among Japan and neighboring Asian countries. With support from AMED, HGPI conducted a study in FY2016 entitled the “Research Project on the Construction and Use of a Model for an International Public-Private Partnership (PPP) in Dementia Research,” which examined PPPs for dementia research around the world. Based on our findings, we made recommendations for building such a framework in Japan. When doing so, managing public and private research funds alone will present issues in terms of sustainability, so in addition to researchers and data, a system to concentrate funding will also be necessary.

In Conclusion
In this column, we discussed progress on the National Framework for the Promotion of Dementia Policies presented by the Government in 2019 based on their most recent publication. The progress review published by the Government provides a very thorough review of the Framework’s progress. It reviews not only the Framework’s section headings and KPIs, but also conducts a line-by-line review of the text to address every measure that was planned and report on how much progress has been made on each point. On the other hand, there has been no active publicity regarding the release of the progress review. In a way, it feels like an excellent opportunity to explain recent progress on dementia policy to the public has been missed.

Many countries around the world are interested in Japan’s progress on dementia policy. HGPI frequently receives inquiries on this subject from researchers and organizations in various countries and regions. We then comb the latest publications to find answers to those inquiries. Providing information on Japan’s healthcare system is highly valuable in terms of making an international contribution and as part of foreign policy, so we recommend the Government to make proactive efforts to disseminate policy information, including statistical data, in multiple languages including Japanese and English.

While still we have to endure the current circumstances for quite some time, we hope for a quick end to the COVID-19 pandemic.