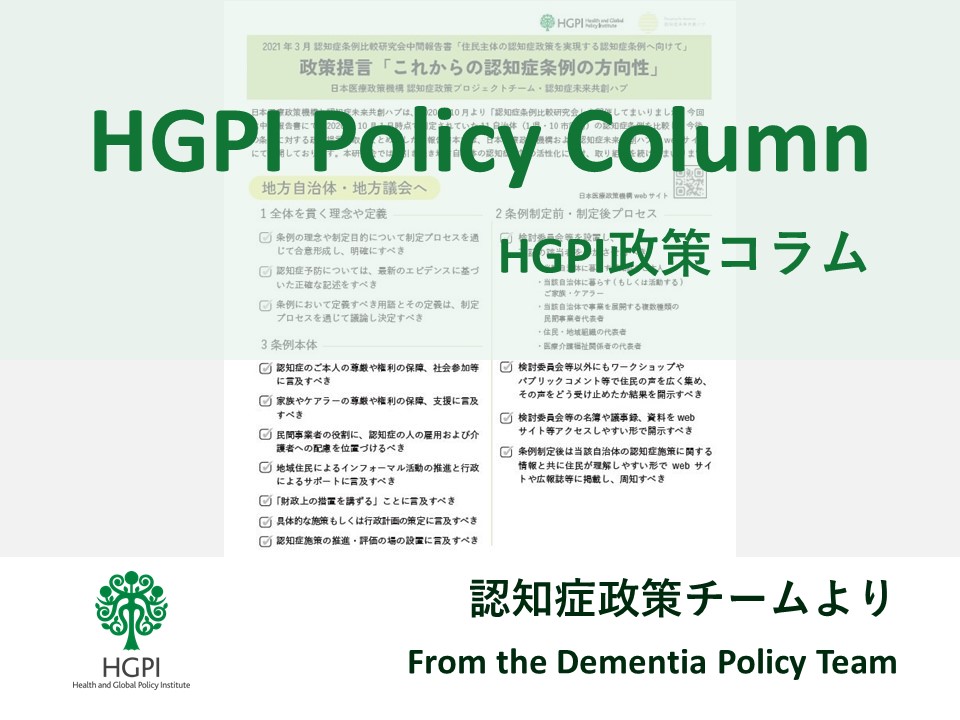 Key Points
The Research Group on Local Regulations for Dementia co-hosted by Health and Global Policy Institute (HGPI) and Designing for Dementia interim report and proposal found that steps to enact regulations for dementia in most of the eleven governments that have done so began due to local characteristic, past initiatives, and efforts from civil society.
In the future, it will be necessary for more municipalities to engage in cross-referencing. This is likely to result in a broad variety of regulations for dementia.
Including various stakeholders including people with dementia, their families, and their carers during the formulation process will drive the creation of customized dementia regulations for each local government that promote the measures needed in each community.

Introduction
In our previous column, I examined a Japanese government report detailing progress on the National Framework for Promotion of Dementia Policies, a new policy vision that was presented in 2019. While steady progress is being made on each measure outlined in that Framework, I mentioned that there are lingering issues related to Government communication efforts. In this column, I would like to take a look at the various regulations for dementia that have been enacted by regional governments across the country.

Introducing the Research Group on Local Regulations for Dementia, co-hosted by Health and Global Policy Institute and Designing for Dementia
In recent years, there has been a movement to enact regulations for dementia among local governments.
In December 2017, Obu City in Aichi Prefecture became the first city in Japan to do so with the enactment of the Regulation for Community Development to Prevent Uncertainty Toward Dementia in Obu City. While their names and contents vary, as of October 1, 2020, eleven local governments (one prefectural government and ten municipal governments) had enacted dementia-related regulations. This is in line with Designing for Dementia’s vision of creating a more dementia-friendly future and HGPI’s mission to help citizens shape healthcare policy, as achieving these will require communities to take initiative in developing their own policies for dementia instead of enacting uniform regulations nationwide.

To encourage these developments, HGPI and Designing for Dementia established a study group to examine regulations for dementia in October 2020. We are deeply grateful to the members and observers who participated and gave their support in pursuing Designing for Dementia’s goal of a more dementia-friendly future and HGPI’s mission to help citizens shape healthcare policy. On March 22, 2021, the study group published a report entitled “The Future Direction of Regulations for Dementia” which shared the results of a comparison study conducted on local dementia regulations and provided recommendations for local governments, local assemblies, residents, the national Government, private companies, and other stakeholders. (Link ) As a member of that study group and as head of the secretariat, I am extremely happy we were able to successfully publish the interim report. Not only was the National Framework for Promotion of Dementia Policies enacted in 2019, Diet members also submitted the Basic Act for Dementia that year. As major developments in national dementia policy have begun, I feel that now is the perfect time for us to reexamine how local governments, the governments closest to civil society, should create dementia policies. The significance of the study group and our thoughts are described more fully in the report, so I hope you will visit the link above. In this edition of our column, we will examine the chance that more municipalities will enact regulations for dementia in the future, a topic we paid consideration to when organizing the study group, composing our report, and formulating our recommendations.

Six of the eleven governments we examined are located in Aichi Prefecture, including Aichi Prefecture itself. Although the overall sample size was small, these account for over half of the total. Given the fact there are more than 1,700 municipalities in Japan, it is interesting that regulations for dementia are concentrated in Aichi Prefecture. As mentioned in the interim report, this is likely related to the fact research on healthcare and long-term care for elderly people is flourishing in Aichi Prefecture at places like the National Center for Geriatrics and Gerontology and the Obu City Dementia Care Research and Training Center. There was also a tragic accident in Obu City in 2007 when an elderly man with dementia was hit by a JR Tokai train. It is likely that responding to this incident was taken up as a policy issue by Aichi Prefecture, Obu City, and other municipalities in the prefecture. There is also Aichi Prefecture’s Orange Town Project, which began in 2017 and includes the training of dementia supporters at companies and workplaces as a target measure. This is also a priority item in the newest version of the National Framework for Promotion of Dementia Policies and shows how the Aichi Orange Town Project is one example of a highly innovative administrative plan.

So, will more local governments enact regulations for dementia in the future? To answer this question, we will refer to the Dynamic Interdependence Model proposed by political scientist Shuichiro Ito as a previous study on policy-making processes in local governments. Ito explains these processes using three mechanisms: local endogenous factors, cross-referencing, and horizontal competition. This column is not a paper on political science and is intended for general audiences, so we will not go into great detail on how these mechanisms work. However, we will point out that “local endogenous factors” include social resources (e.g. the presence of research institutes in the municipality); socioeconomic factors such as societal, economic, and political conditions; political factors; and organizational factors. The cross-referencing mechanism begins to operate as municipalities across the nation refer to earlier developments in other municipalities (which were affected by the aforementioned local endogenous factors). Finally, as a result of nationwide dissemination and the adoption of similar policies by the national Government, the country moves into the horizontal competition phase. During this phase, all local governments begin to adopt similar policies regardless of local endogenous factors.*1

As cross-referencing progresses, more and more municipalities will move to enact regulations for dementia. In addition, the enactment of the Basic Act on Dementia which has been submitted to the Diet will serve as a catalyst for horizontal competition. Many local governments do not think of everything from scratch during the policy planning phase. Instead, they regularly conduct cross-referencing and watch trends among other local governments. Cross-referencing has been criticized as a method that leads to identical policies and regulations, but in reality, it does not result in regulations that are carbon copies. While regulations created using cross-referencing tend to be similar, uniformity has not actually occurred. Rather, because municipalities that cross-reference devote efforts to altering regulations to be more suitable for their own needs, it leads to the diversification of regulations.*2 Furthermore, in the modern era, the texts of regulations are made public in forms that can be accessed by anyone, such as over the Internet. If one regulation is too similar to another one, it will be found out by a third party conducting a comparative study like the one conducted by our group. Local governments must convey the uniqueness of their own regulations, which makes the “disclosure of information in the enactment process” (as mentioned in our study group’s proposal) very important. It is also likely that the uniqueness of a regulation will be impacted by the types of people involved in the enactment process. In fact, a previous study comparing and examining cultural regulations of local governments found out that municipalities that included cultural policy experts during the review stages avoided blindly following national laws and incorporated unique content into their regulations.*3

Steps towards realizing original regulations for dementia in every city
To formulate regulations on dementia, local governments will collect and cross-reference information and elements, which will then be given careful consideration by multi-stakeholders during the enactment process. This will ensure that their regulations are unique. In terms of content, it is likely many of the local governments that will be examining regulations for dementia will be influenced significantly by external factors like the National Framework for Promotion of Dementia Policies and the Basic Act for Dementia. They are also likely to refer to the decisions made by other governments that acted earlier. Starting with people with dementia, we believe that encouraging participation from a variety of stakeholders who understand local issues will lead to the realization of a broad variety of unique dementia policies across Japan.

As each local government moves to enact its own regulation for dementia, it is our sincere hope that the report and recommendations from HGPI and Designing for Dementia “Steps Toward Regulations for Dementia That Achieve Citizen-Centered Dementia Policy” contributes to those efforts.