[HGPI Policy Column] No. 15 – From the Dementia Team – How Should the Public React to the Policy Evaluation System in Japan? 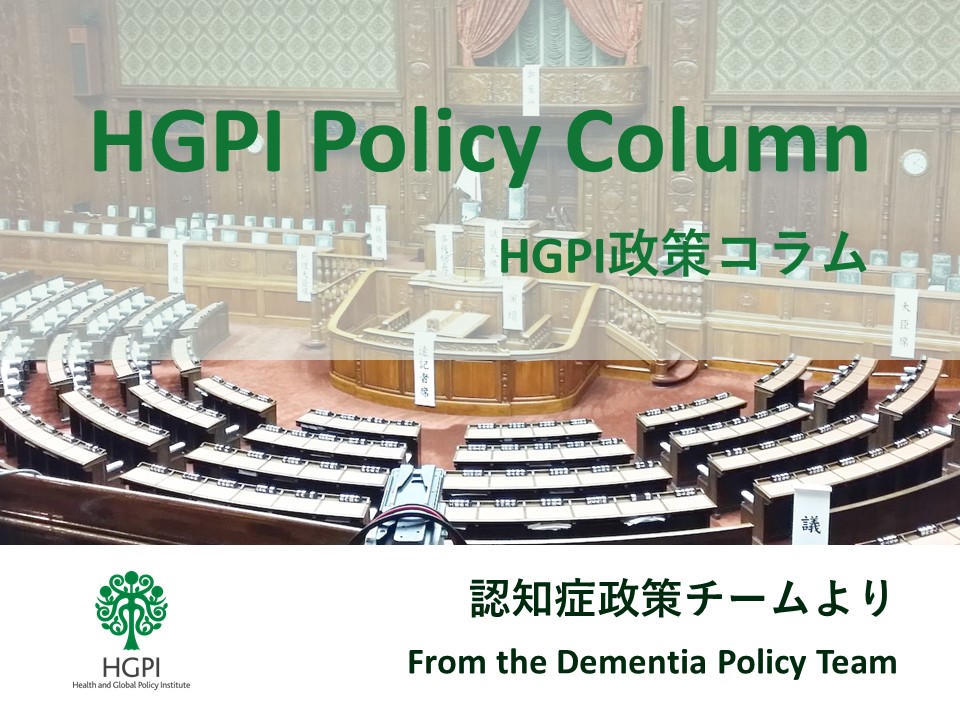 On May 12, 2020, the Ministry of Internal Affairs and Communications (MIC) presented its recommendations for dementia policy based on the results of its third-party evaluation survey, which examined Initial-phase Intensive Support Teams for Dementia and medical centers for dementia.
Measures to evaluate policy in Japan mostly fall into two categories: each Ministry conducts its own internal evaluations and the MIC conducts third-party evaluations. The recommendations presented in the MIC report that is the subject of this column were based on the results of a third-party evaluation.
Members of civil society must shoulder a portion of the responsibility for the effects of policies by electing the right people to represent them in the policy-decision process. In other words, to improve policy, the public must take action and vote.

In our previous column, we introduced Alzheimer’s Disease International’s (ADI) latest report evaluating dementia policy in every country around the world entitled, “From Plan to Impact III – Maintaining Dementia as a Priority in Unprecedented Times.” Japan was considered to have advanced dementia policy and, among the five Stages 1-5, it was rated 5A. To rise to the highest rank, 5B, the report indicated that Japan has room to grow in terms of fiscal measures and policy evaluation. In this column, we will examine the policy evaluation system in Japan using the latest evaluation results of dementia policy as an example.

The Third Party Evaluation of Dementia Policy Conducted by MIC

On May 12, 2020, the MIC presented the results of a third-party evaluation of dementia policy it conducted and recommendations based on those results. An English translation of those recommendations is provided below.

In the field of dementia, in which early intervention and treatment is considered important, the Ministry of Internal Affairs and Communications (MIC) conducted a survey to evaluate current measures to support people with dementia, elderly people suspected of having dementia, and the families of both groups. Based on the results of that evaluation, the Minister of Internal Affairs and Communications recommends the following to the Minister of Health, Labour and Welfare:
(1) After gathering and analyzing real-world examples from each region, provide municipalities with options concerning support schemes and evaluation indices that can be selected flexibly according to local circumstances;
(2) Properly evaluate the operations of medical centers for dementia, which are the core of the medical treatment system for dementia.

Source: Ministry of Internal Affairs and Communications. “Evaluation of Community Support for Elderly People with Dementia and Recommendations Based on Evaluation Results.”

The AEB is responsible for providing third-party evaluations, the basic guidelines for which are outlined in the Administrative Evaluation Program. In addition to conducting surveys focused on specific themes and presenting the results of those surveys to promote improvements in AEB Surveys, the AEB reviews internal evaluations conducted by each Ministry in reports called “Policy Evaluation Promotions.” The MIC also provides administrative consultations as part of a framework in which the MIC processes and works to resolve complaints, opinions, and requests expressed by members of the public to the Government. The MIC then utilizes the lessons learned over the course of that process to improve Government administration and public systems. An AEB survey similar to the one recently conducted on dementia policy called the “Survey on the Utilization of Specialized Staff in Schools” was conducted in 2018. Recommendations were made to the Minister of Health, Labour and Welfare based on the results of both of those surveys.

Survey Results
1. Regarding placement, number of active teams, and results of support provided by Initial-phase Intensive Support Teams for Dementia

3. Evaluation of the implementation status and effectiveness of Initial-phase Intensive Support Teams for Dementia

Recommendations
1. Gather and analyze examples of support for elderly people with dementia based on factors like municipality size, the number of elderly people in the region, and the placement of support teams and examine the division of roles between support teams and integrated community care centers. Based on those findings, present municipalities with support scheme options that can be selected according to the real-world circumstances in the community.

2. Clarify the intended effects of initial-phase intensive support on elderly people with dementia and provide municipalities evaluation indices to evaluate those effects.

“Evaluation of Medical Centers for Dementia”

2. Evaluation of functions and structure related to provision of care by medical centers in each area and in each prefecture as a whole

Recommendations
1. Reassess the need to evaluate the activities of each medical center at the prefectural level or at other higher levels of administration.

2. Evaluations of the functions and structure of care provided by medical centers in each region and prefecture as a whole should be clearly outlined in the guidelines for medical center implementation. Measures should be taken to improve operation results reports to remove variances in recording methods used to track the number of differential diagnoses and other evaluation indices in said reports.

Source: Ministry of Internal Affairs and Communications. “Evaluation of Community Support for Elderly People with Dementia and Recommendations Based on Evaluation Results.”

The Next Step: Promote Action from Civil Society

Moving forward, we must track the improvements that are made to dementia policy in response to these recommendations. Even though it is called a “third-party evaluation,” AEB Surveys are still evaluations conducted internally within the Government. If we wish for MIC evaluations and efforts for improvement made in response to these recommendations to have sufficient compelling force, establishing a policy evaluation organization that could act as a fourth governing body in addition to the legislative, executive, and judicial bodies might be a viable option. However, in practice, the body that enacts policy is the administration. Or, to be more specific, the authority to make the decisions to enact policy rests with the legislative branch, the Diet. Therefore, the responsibility to evaluate policy should not be borne by the administration alone. That responsibility should also be shouldered by legislation.

In other words, that responsibility also rests with us, the citizens, who must select our representatives through elections. It is our responsibility to make sure that action is being taken to make improvements based on policy evaluations like those discussed above.

A work by famed political scholar Masao Maruyama describes the importance of political engagement among the public as thus:

“It is because people who do not engage in or aspire to politics as a profession engage in political activities that democracy can be kept alive and vivid.”
Masao Maruyama. 1960, “Attitude Determination in the Modern Era.” Thought and Behavior in Modern Japanese Politics, Special Edition, p459.

Here, Professor Maruyama points out civil society’s “sins of omission.” If we do not make requests or proposals to improve politics and policy because we believe we, as individuals, lack significant authority, the combined effect of many people failing to engage causes in great mistakes to occur. As a result, the final policy deviates significantly from what was originally envisioned. In other words, choosing to do nothing can have dire consequences.

I am reminded once again of the importance of maintaining a stance in which we pay close attention to the Government and legislation’s future actions in response to these recommendations and communicate the thoughts and feelings of those directly involved on both sides of caregiving.

< HGPI Policy Column No.16 -from the Child Health Team-

HGPI Policy Column No.14 -from the Mental Health Project Team- >