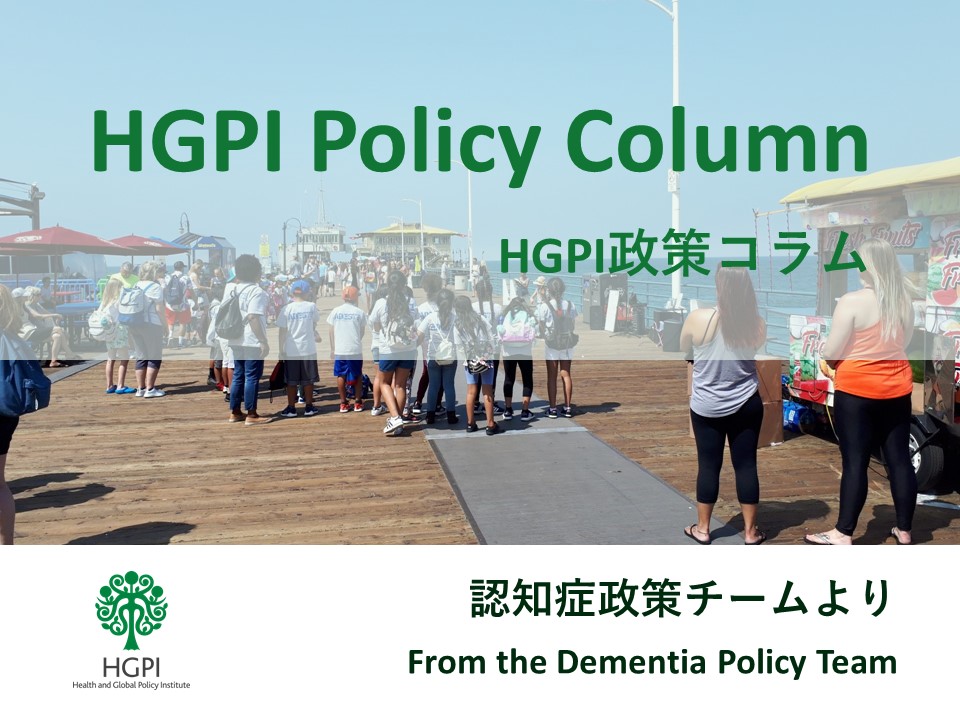 Key points
・On June 25, 2020 , Alzheimer’s Disease International (ADI) presented an evaluation of dementia policy in each country in a report entitled “From Plan to Impact III Maintaining dementia as a priority in unprecedented times.”
・Only 31 countries have enacted national policies for dementia. This is far behind the World Health Organization’s (WHO) global target of 75% of countries having “at least one dementia-friendly initiative to foster a dementia-inclusive society by 2025.”
・The ADI report assigned Japan’s dementia policy a favorable grade of 5A. Funding and policy evaluation methods must be improved for Japan to achieve a higher grade.

Lately, our column has focused on themes related to the novel coronavirus (COVID-19) pandemic, but in this column, we will return to our original theme of examining international trends in dementia policy. This column will focus on the most recent Alzheimer’s Disease International (ADI) report, which was presented on June 25, 2020 and is titled “From Plan to Impact III Maintaining dementia as a priority in unprecedented times.”

Japan’s involvement with Alzheimer’s Disease International (ADI)
Founded in 1984, ADI is an international alliance that brings together organizations for Alzheimer’s disease from every country in the world. The Family Association became Japan’s representative in ADI in 1992, when it adopted the English name “Alzheimer’s Association Japan.” ADI backs efforts conducted by organizations for Alzheimer’s disease in every country to support people with dementia or their families. In addition to working to improve standards for dementia efforts in international society by sharing best practices with the world, ADI coordinates with the WHO to increase the priority of dementia as a policy issue in every government worldwide.

The 20th ADI International Conference was held in Kyoto in October 2004, marking the first time for Japan to host the event. It was a revolutionary international meeting that featured presentations from people with dementia, providing an opportunity to raise recognition of the fact that the opinions of people with dementia should always be emphasized in dementia policy. Immediately after the conference, in December 2004, the Japanese Government reviewed its usage of the term “chiho” to refer to dementia, determining that it is a discriminatory term. The term “ninchi-sho” or “cognitive disorder” was adopted in its stead, making it a year of significant social impact. Then, in 2017, the ADI once again met in Kyoto for its 32nd International Conference. At the event, Health and Global Policy Institute (HGPI) Chairman and Designing for Dementia Councillor Dr. Kiyoshi Kurokawa gave a presentation on the results of a survey conducted by HGPI on building systems for creating international links among government, industry, and academia. Dr. Kurokawa’s presentation also covered HGPI’s partnership with the World Dementia Council (WDC).

Introducing “From Plan to Impact”

The most recent “From Plan to Impact” report from ADI is the third edition of the report, which was previously published in 2018 and 2019. This series of the reports aims to monitor progress on the WHO’s “Global action plan on the public health response to dementia 2017-2025” (hereinafter, the WHO action plan), which was presented in 2017.

1  Dementia as a public health priority
1.1 75% of countries will have developed or updated national policies, strategies, plans or frameworks for dementia, either stand-alone or integrated into other policies/plans, by 2025.

3  Dementia risk reduction
3.1 The relevant global targets defined in the Global action plan for prevention and control of non-communicable diseases 2013–2020 and any future revisions are achieved for risk reduction and reported.

4  Dementia diagnosis, treatment, care and support
4.1 In at least 50% of countries, as a minimum, 50% of the estimated number of people with dementia are diagnosed by 2025.

5  Support for dementia carers
5.1 75% of countries provide support and training programs for carers and families of people with dementia by 2025.

7  Dementia research and innovation
7.1 The output of global research on dementia doubles between 2017 and 2025. 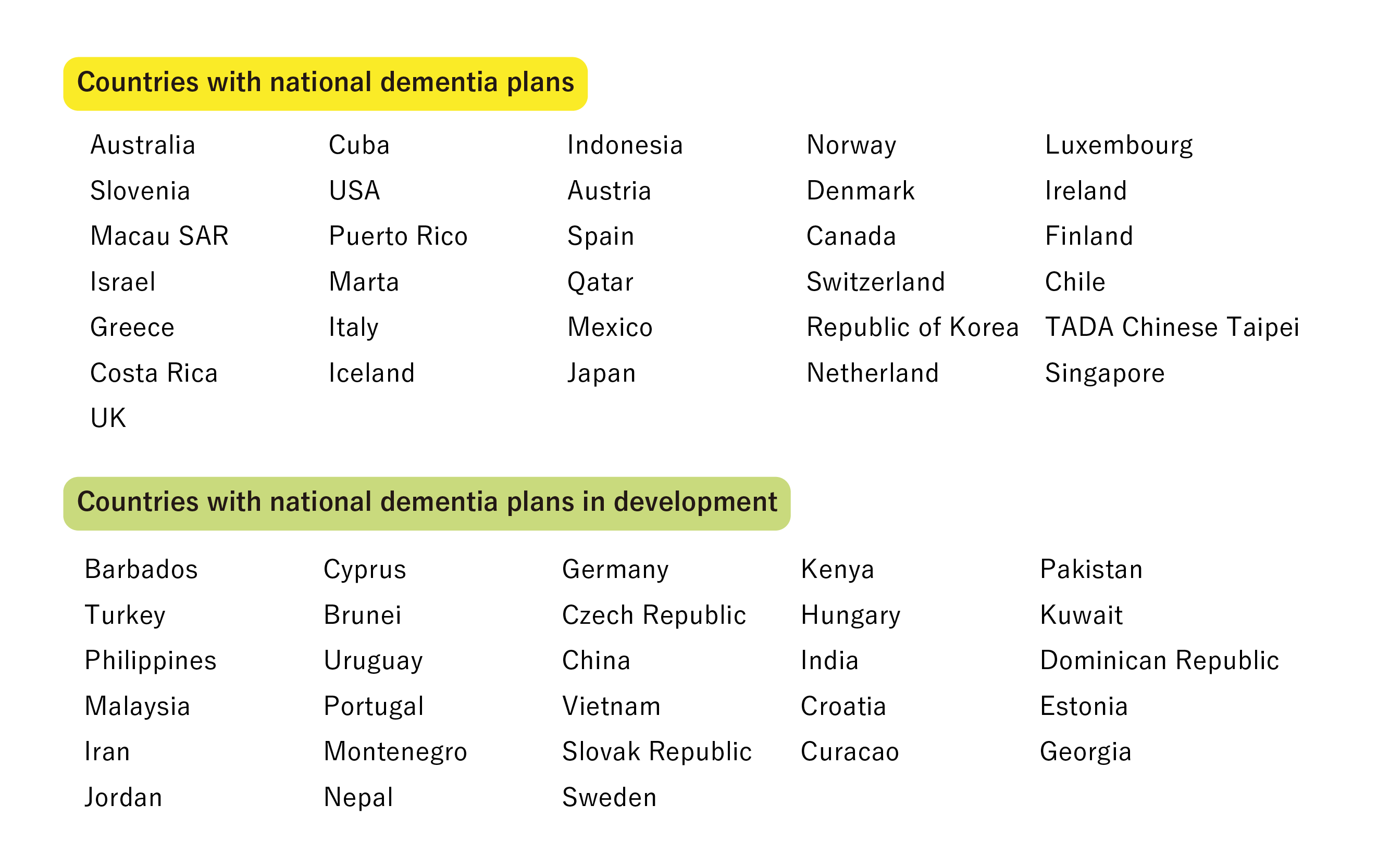 The ADI report also contains evaluations on the content and progress of each country’s policies, strategies, or plans for dementia. This progress is graded by one of five stages and those stages are split into multiple categories to provide information about each country’s progress in more detail. Their ranking system is shown in Fig. 2 below. 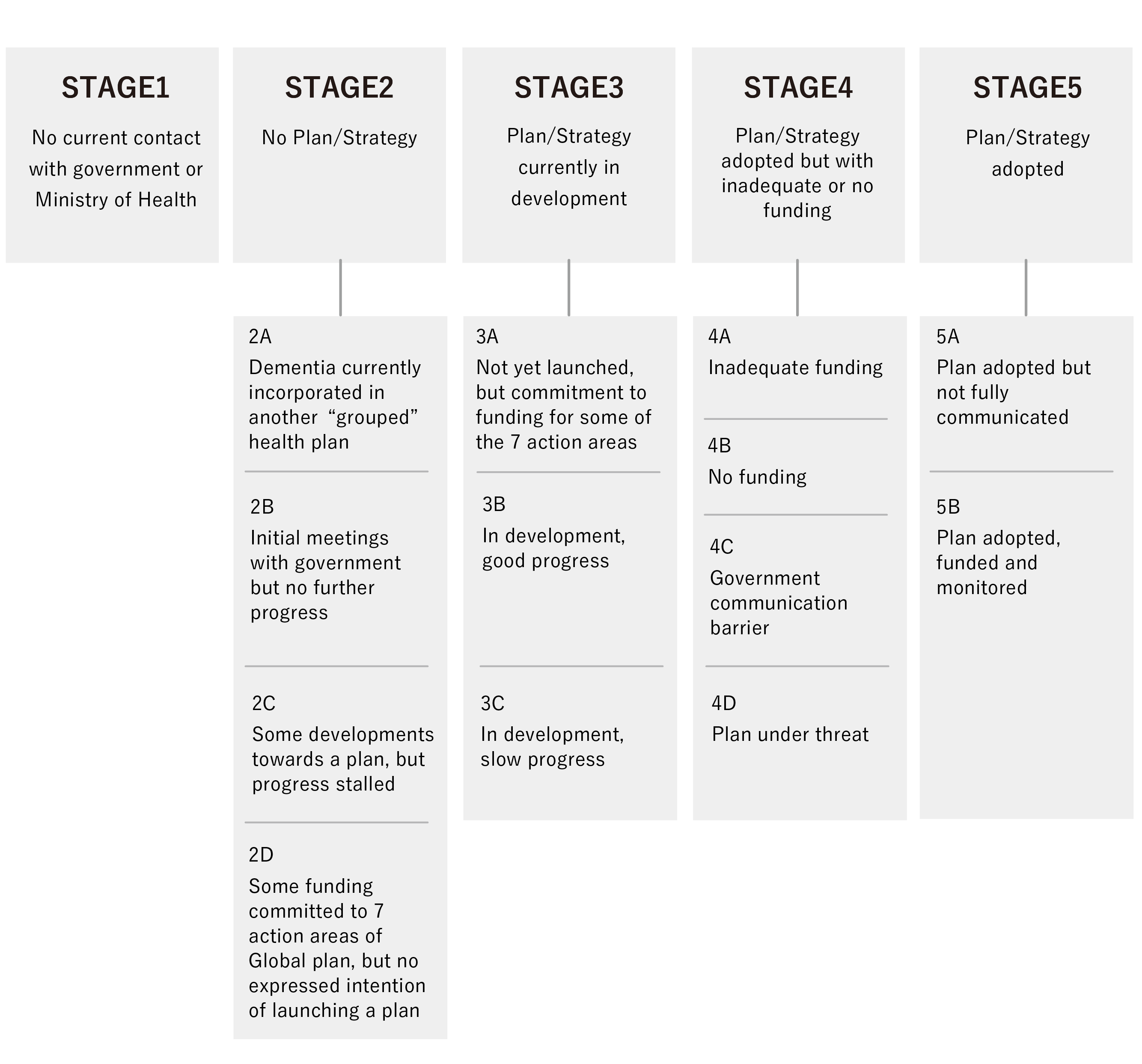 One page of the report discusses the situation in Japan, saying, “Japan is the most aged country in the world and has been developing dementia care and policy for over 40 years, giving hope that this leadership could be shared globally,” demonstrating that the world is looking to Japan for leadership in this field. Japan’s policies have been awarded a grade of 5A, which is the second-highest rank after 5B. Other countries that received a grade of 5A were Costa Rica, Cuba, Macao, and Singapore. Other countries in the Stage 5 group are shown in Fig. 3 below.

This column focused on a portion of the latest ADI report, “From Plan to Impact III Maintaining dementia as a priority in unprecedented times.” This report issued a strong call to not let dementia decrease in importance as a public health issue even in the face of the COVID-19 pandemic while emphasizing the need to improve support for people with dementia and their families who have been impacted by COVID-19. It also offered high praise to governments who have continued efforts to enact dementia policy in spite of the current circumstances, such as China, Germany, India, and Iceland.

This leads us to ask, what is the best direction for dementia policy in Japan moving forward? While the ultimate goal is not to receive recognition or a high ranking, we can use the grading system presented by the ADI in their latest report as an easy-to-understand standard. In order for Japan to achieve the next rank, 5B, it will be necessary to improve funding and policy evaluation methods.

For example, from the perspective of R&D, Ministers at the 2013 G8 Dementia Summit (currently the G7) agreed to aim to identify “a cure, or a disease-modifying therapy, for dementia by 2025.” Although it was not included in a declaration or joint statement, each government was asked to commit to investing the equivalent of 1% of the annual societal costs of dementia to R&D every year. Using that as a reference value, a research team lead by Professor Mitsuhiro Sado at Keio University estimated that the societal cost of dementia in Japan in 2014 was 14.5 trillion yen, meaning that Japan should aim to invest 1% of that or 145 billion yen to dementia research.1  Although the data is somewhat old, OECD data from 2015 showed that the amount invested in R&D for dementia in Japan was estimated to be USD$21 million, or approximately 1.65 billion yen in 2012. This highlights the massive gap in funding.2  During that same period, the US invested approximately USD$625 million in R&D for dementia while the UK invested USD$49 million. While it goes without saying that it will be important for Japan to promote investments in R&D moving forward, it will also be necessary to share limited financial resources, human resources, and data for R&D efforts with the rest of the world.

From the perspective of policy evaluation, we believe that efforts to set targets must go one step further. In the past, the “Comprehensive Strategy to Accelerate Dementia Measures” (the New Orange Plan) defined performance indicators or updated previous ones, as did the Framework for Promoting Dementia Care that was presented in 2019. One such goal was to train 12 million dementia supporters by the end of 2020, but it is anticipated that future efforts to set goals will go one step further, such as by identifying age groups and categories that require more attention to deepen understanding and build awareness towards dementia in each region. In recent years, the central Government has set a goal of simultaneously promoting statistical reform and Evidence-Based Policy Making (EBPM), so that is another urgent issue in general public policy.

< HGPI Policy Column No.14 -from the Mental Health Project Team-