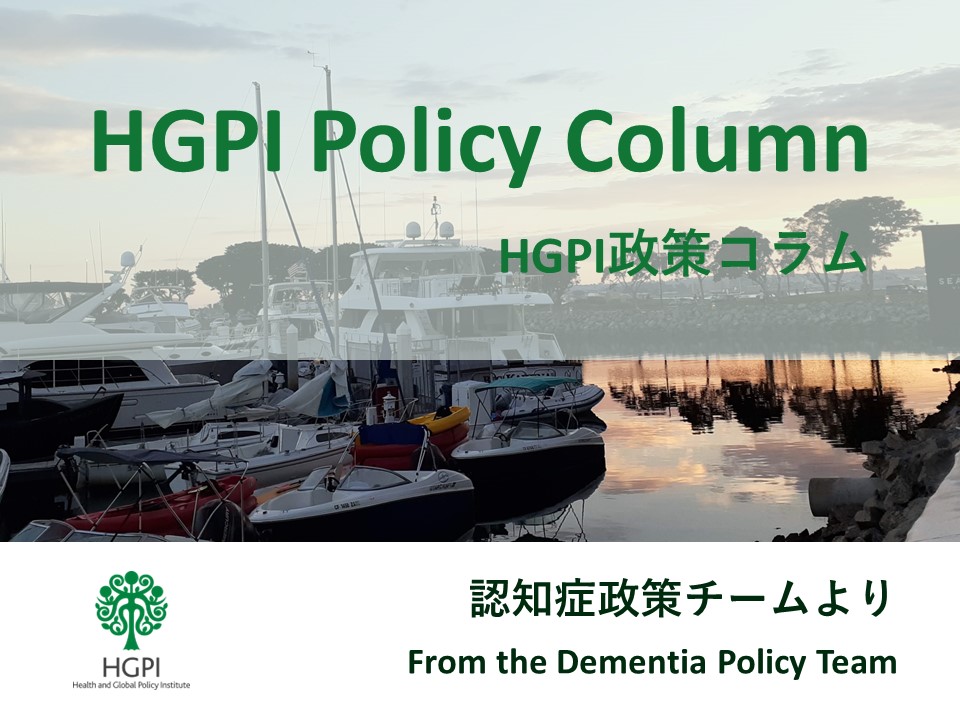 From Plan to Impact V

In this column, we will introduce and discuss “From Plan to Impact V WHO Global action plan: The time to act is now,” which was released by Alzheimer’s Disease International (ADI) on May 25, 2022. Below, we will refer to it as the ADI 2022 Report.

This series of annual reports from ADI summarizes progress on the adoption of national strategies for dementia in each country and territory while sharing examples of such strategies, making it a precious resource for tracking developments in global dementia policy. This will be our third column reviewing an ADI report, following our previous columns covering the 2020 and 2021 versions.

Meeting WHO targets for 2025 has become extremely difficult 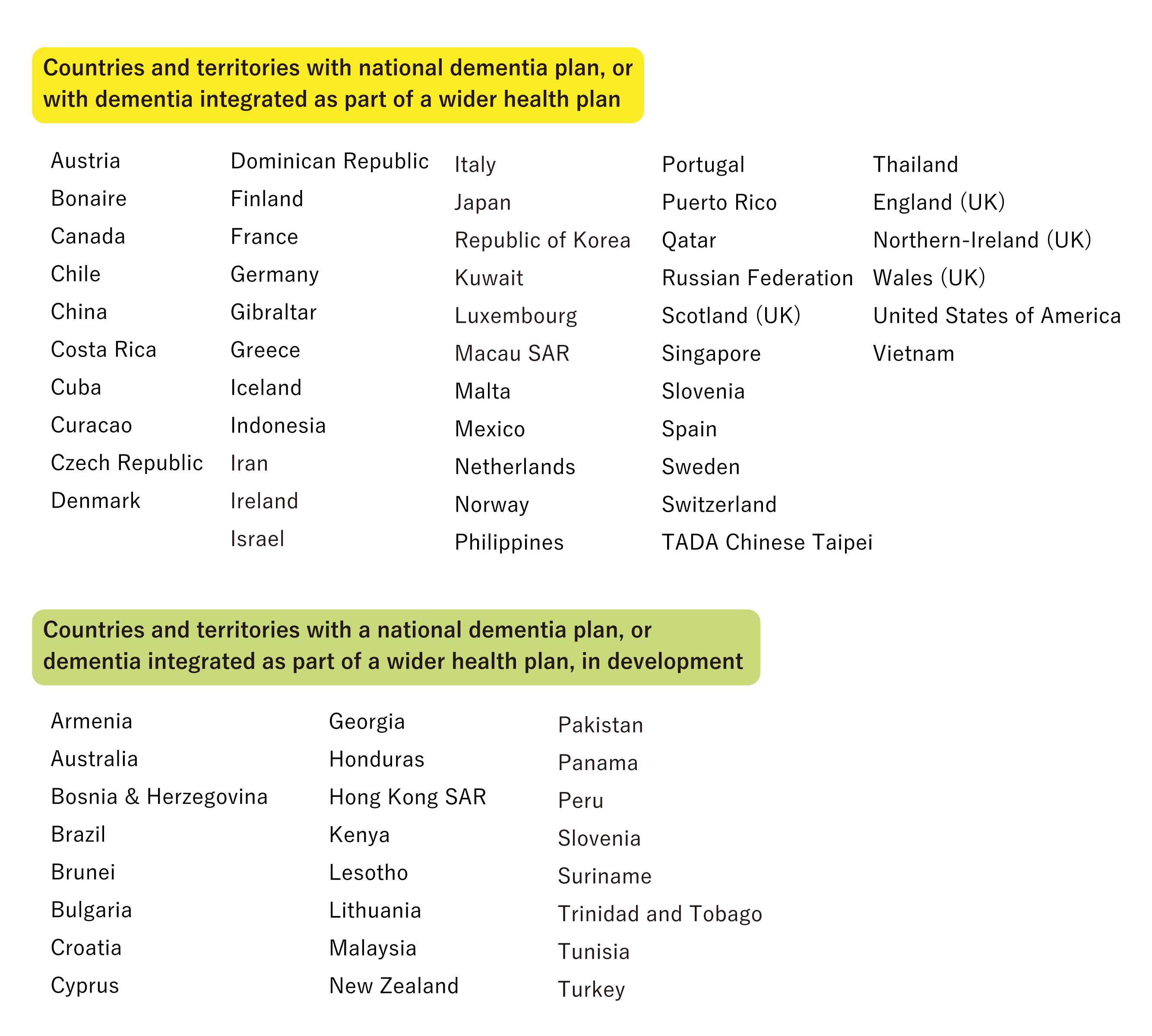 One target set by “Global action plan on the public health response to dementia 2017-2025” presented by WHO in 2017 (hereinafter, “the WHO Action Plan”) reads, “75% of [WHO Member States] will have developed or updated national policies, strategies, plans or frameworks for dementia, either stand-alone or integrated into other policies/plans, by 2025.” Meeting this target by 2025 will require 35 additional countries and territories to formulate national plans every year for the next three years, leaving us to conclude that the situation is exceedingly difficult. 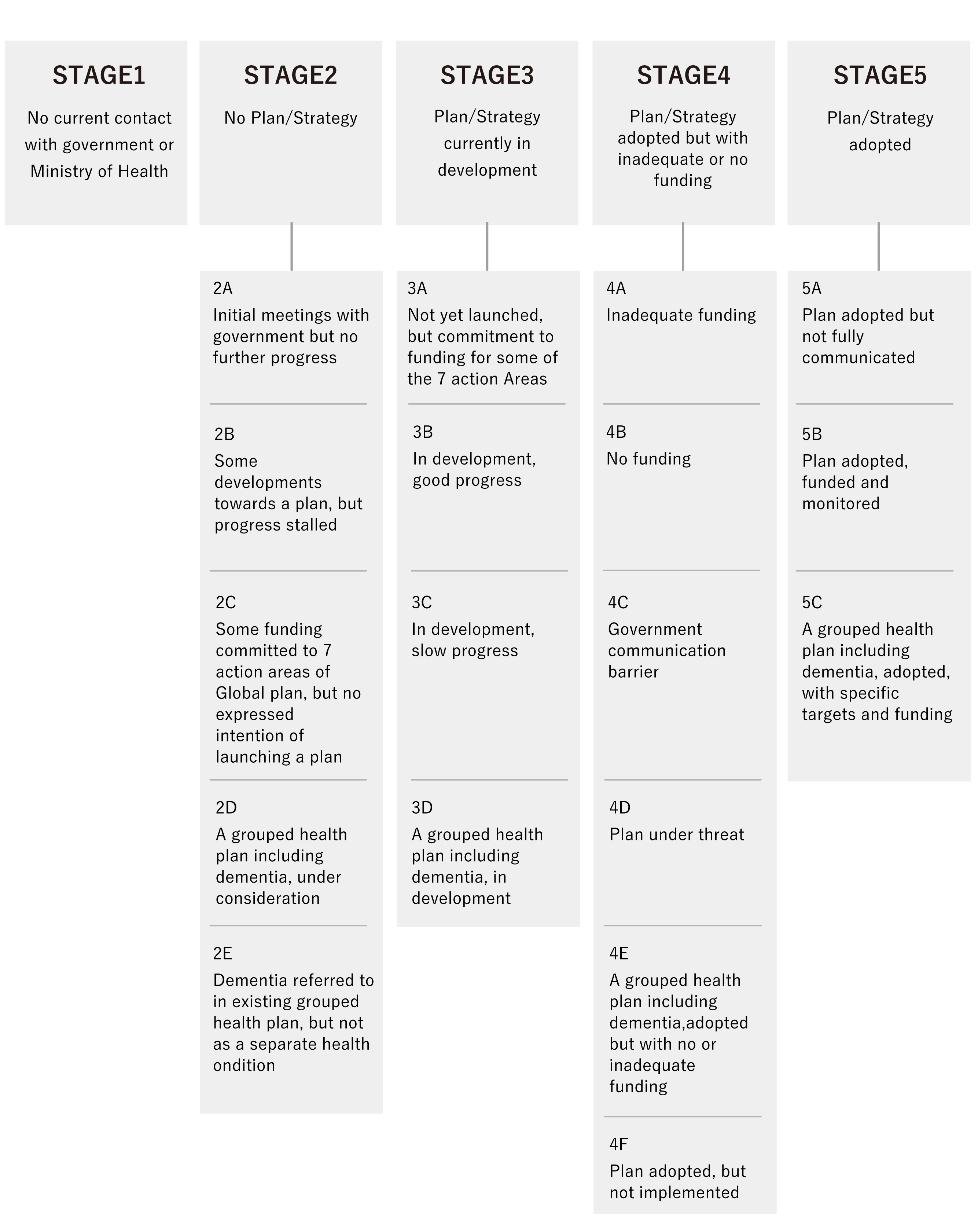 The ADI 2022 Report also had some updates to the indicators used in the assessment. A new stage called “4F: Plan adopted, but not implemented” was added. While this is only conjecture, it may have been the case that the impact of the COVID-19 pandemic over several years made it impossible to allocate personnel for implementing national plans, even after those plans had been adopted.

Just like in 2021, Japan was ranked “5B: Plan adopted, funded, and monitored.” The report also touches on the effects of COVID-19 on people living with dementia in Japan, pointing out that the number of care beds where they can be treated for COVID-19 infections is limited, and that the availability of medical home visits has not kept up with demand.

In Figure 3, among countries and territories that have already adopted national dementia plans, those that meet the criteria for “STAGE 5” described above are shown in bold. Three countries have moved up this year: Austria, the Netherlands, and Finland. It is wonderful to see that policy progress was made even while the world was responding to the COVID-19 pandemic.

The ADI 2022 Report also shares a number of examples from various countries, which include several severe situations in low- and middle-income countries. According to the report, approximately 60% of people living with dementia are in low- and middle-income countries where personnel and financial resources continue to be split for conducting vaccination programs and taking other measures for infection control.

We must also mention Ukraine, which is currently engulfed in war. The report notes that Ukraine was in the process of developing a national plan for dementia, but that the situation has changed drastically due to the Russian invasion.

Continuing from our columns last year and the year before, this column took a look at the content of ADI’s report. This annual update on progress in developing national plans for dementia around the world is extremely valuable and I would like to once again express our gratitude and respect to ADI and everyone involved in preparing it.

To make it easier to prepare such reports, it is also very important that Japan communicates relevant information to the international community. As pointed out in previous columns, although domestic dementia policy includes precise goals and progress is being carefully managed, communication has been insufficient. Another issue moving forward is the fact that there is also almost no communication in languages other than Japanese. From this perspective, I believe that the Japan International Dementia Exchange Platform can play a key role. It is operated mainly by Alzheimer’s Association Japan, the Japanese branch of ADI. As a member of their steering committee, this may sound like singing our own praises, but from the perspective of information objectivity, I think it is significant that a civil society organization with branches throughout Japan like Alzheimer’s Association Japan is taking responsibility for international communication. While its main function is currently to disseminate information in Japanese and English using the platform website, in the future, it can provide opportunities for mutual exchange, serve as a link between stakeholders in the field of dementia including civil society, academia, and industry, and be a source of information on the progress of these activities for the global community.

Next year, Japan will host the G7 Summit. We will also mark one decade since the 2013 G8 Dementia Summit in the U.K. In July 2022, Health and Global Policy Institute (HGPI) presented policy recommendations titled, “The Future of Dementia Policy 2022,” which calls for the adoption of dementia as a central agenda at the G7 Summit. We have high expectations for Japan to provide leadership that reminds the global community of the importance of dementia and reinvigorates efforts to promote dementia policy after a few years of slow progress for its agenda. HGPI and the Designing for Dementia Hub will also continue working in their capacity as civil society organizations to help build that momentum.