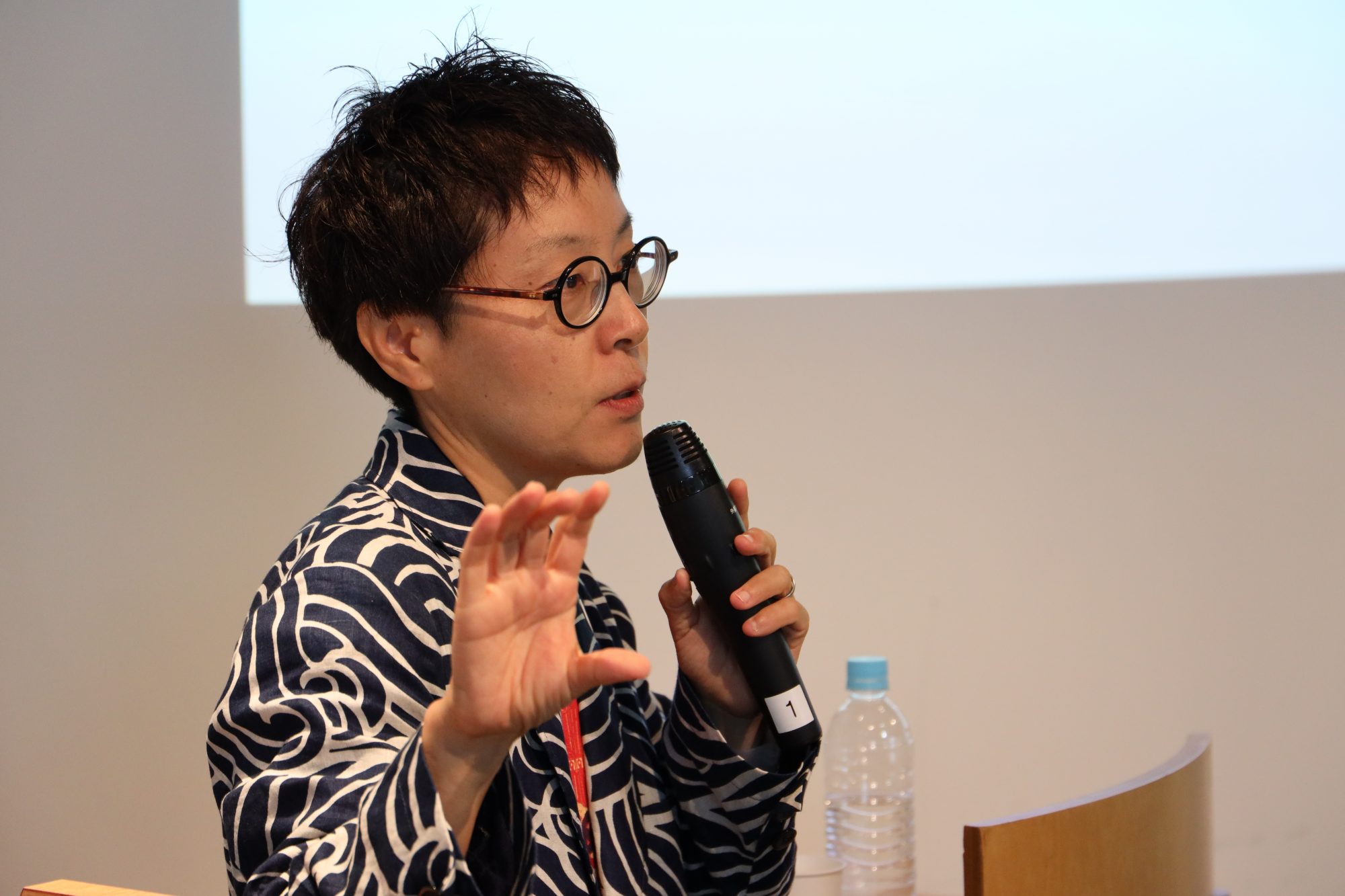 For this meeting, we welcomed Ms. Naomi Sakurai (President, Cancer Solutions Co., Ltd.) for a discussion on balancing innovation and stability in Japan’s healthcare system in response to a declining birthrate and population aging. Ms. Sakurai shared her views on issues facing that effort and spoke about future reforms. Through the lecture and the question-and-answer session following the discussion, we deepened our understanding of this topic together with everyone in attendance.


■ The importance and current status of patient perspectives in balancing healthcare systems and innovation
In Japan, the working generation that is the central pillar supporting society will continually decrease in size while the elderly population will increase. Growing income imbalance poses a risk to future efforts to maintain the public healthcare insurance system. During telephone consultation activities at her association representing people receiving healthcare, Ms. Sakurai has been asked: “What should do if my boss tells me to quit because they think that the company will go under if I stay?” While there have been innovations in healthcare technology, health insurance societies lack vigor. There are even examples of times when a single, expensive medical treatment has significantly affected funding for an entire health insurance society. Ms. Sakurai’s personal opinion is that it will be necessary to examine the possibility of using a mixture of public health insurance and private health insurance in the future.
There is also the problem of drug lag. Instances in which Japan has been unable to participate in global clinical trials to develop new drugs have increased in recent years. When that happens, it becomes necessary to gather data on Japanese people separately. This results in drug lag. Compared to other countries like China, Japan has been unable to participate in global clinical trials to develop new drugs because its environment is ill-equipped to do so. A lack of manpower, comparatively high costs and – in the field of genome therapy for cancer – the necessary genetic cancer tests being exempt from insurance coverage have been highlighted as causes of this issue.
Given these circumstances, it is critical that our limited resources are invested effectively in an effective manner if we are to promote innovation. In recent years, drug regulations have been reformed with the intent to improve efficiency and to reduce costs for research and development. However, when discussing topics such as medical research, clinical research, or the prescription drug pricing system in Japan, Ms. Sakurai feels that there is not enough attention given to Quality of Life (QOL) for the people receiving healthcare and to Patient and Public Involvement (PPI). A 2016 report published by Metastatic Breast Cancer Alliance that Ms. Sakurai participated in entitled “Global Status of Advanced/Metastatic Breast Cancer ” pointed out that although the development of new drugs is advancing, EQ-5D*1 is falling. Based on that report, the development of new drugs alone is insufficient for improving patient QOL. Other systems such as supporting treatments*2 or employment support are also necessary. In addition, clinical research on supporting treatments has yet to generate any clear evidence to indicate endpoints. To promote research that is more valuable to people receiving healthcare, patient perspectives must be included from the planning stages when conducting clinical research.
The people receiving healthcare could be called “experts” because they are the ones actually receiving healthcare and taking medicine. It is not enough to only incorporate the perspective of QOL for people receiving healthcare in clinical research. It must also be considered during discussions about the prescription drug pricing system, as doing so will make better system planning possible. However, opportunities for the people receiving healthcare to participate in those discussions are currently limited. The expert organization conducting cost-effectiveness analysis at the Central Social Insurance Medical Council (Chuikyo) is advancing discussions without a representative for the people receiving healthcare.
In April 2019, Japan Agency and Medical Research and Development (AMED) published the “Guidebook for Patient and Public Involvement in Research,” and a Working Group to Examine Patient Participation was established at the Pharmaceuticals and Medical Devices Agency (PMDA) in May of that same year. Steps like these showed that the government has started efforts to incorporate participation from the people receiving healthcare, but these efforts are insufficient.
Therefore, it is important for members of the public and people receiving healthcare to be proactive. It is for that reason the PPI Consortium in Japan was established this year. It unites people receiving healthcare and members of the public interested in healthcare and the development of medical devices with representatives from academia and the drug-making industry. Together, they will examine ways of thinking about the development of healthcare and medical devices while working to publicize information on the ideal structure of ethical and highly transparent cooperation between related parties. Its current plans include the adoption and start of an educational program that is currently being used in Europe.

*1 EQ-5D: A comprehensive evaluation scale developed by the EuroQol Group for estimating Health-Related Quality of Life (HRQOL). Its questions address five topics including a degree of motion, pain level, and unease. Based on the answers provided, it calculates a score representing the state of health for the person being evaluated.
(Source: “Developing a Japanese version of the EQ-5D-5L value set,” Japanese edition, 2015 Vol.64 No.1 p.47－55 )

■Paradigm shifts in healthcare and society
As written in “Japan Vision: Health Care 2035,” published in 2015 by the advisory body led by then-Minister of Health, Labour and Welfare Yasuhisa Shiozaki, Japanese healthcare and society will change significantly in the future. Up until now, we have acted within the bounds of regulations enacted by the government and regional municipalities and the frameworks of industry practices to try to maintain the existing system. In the future, it is likely we will enter an era in which rules are created autonomously and independently by all parties concerned with healthcare such as those receiving healthcare, those providing healthcare, insurers, and the general populace. Developments required during the process of this transition can be summarized in the following three points.
The first is progress in cost reduction and optimization. For example, people might be allowed to buy drugs at pharmacies and drugstores that contain the same effective ingredients as the drugs they previously needed a doctor’s prescription to obtain. Measures may also be taken to control the unnecessary procedures hospital conduct to recoup the costs of expensive medical devices. Efforts like these will make it possible to achieve cost reductions that are meaningful to the people receiving healthcare.
The Second is system innovation. One recent popular topic of discussion is the possibility of implementing a pay-per-success system in which people receiving healthcare pay for new drugs according to the efficacy of those drugs. Employment support for people receiving healthcare could also eliminate the established stereotype that people who become ill must quit working or take a leave of absence to recover.
The third is education, which is important to encourage members of the public to become independent and autonomous. It goes without saying that it is important to educate people on the sanctity of life, but they must also be given accurate information on Japan’s healthcare system and its current financial situation. It is necessary to create an environment in which members of the public can choose wisely based on the circumstances.

A lively exchange of opinions was held with the audience during the question-and-answer session following the lecture. 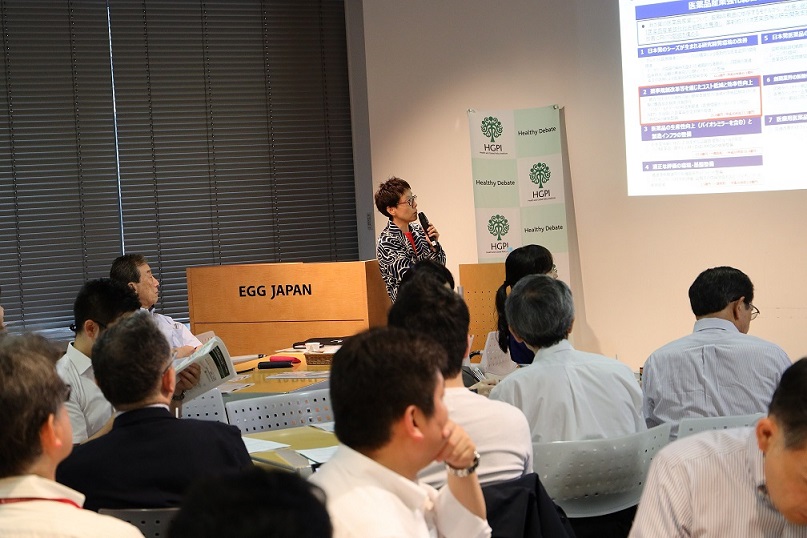 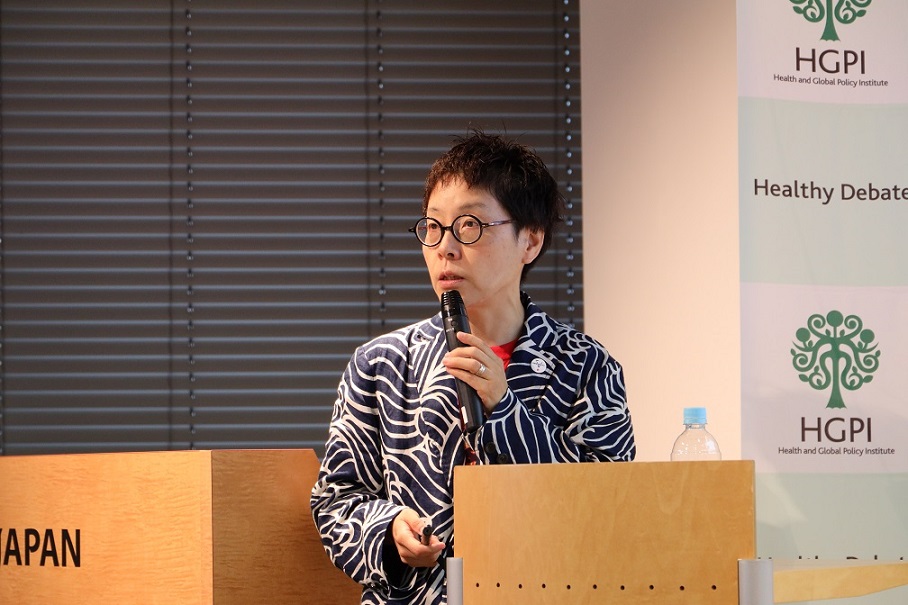 ■ Profile
Ms. Naomi Sakurai (President, Cancer Solutions Co., Ltd)
Naomi Sakurai was diagnosed with cancer in the summer of 2004, while in her 30’s. Since then, she has utilized her personal experience with cancer and social skills to start up a support group. She is currently focusing her efforts on enlightening people and spreading awareness about survivor-ship. Since then, she has continued her activities, appealing for an independent livelihood and self-supporting lifestyle for patients living with the disease and their families.
Director: CSR project, Non-profit organization
Commissioner: Japan Federation of Cancer Patient Groups

< [Event Report] The 80th Breakfast Meeting –Providing Support for Children-Rearing in the Reiwa Era as a Society: Which Value Changes Does Society Require? (September 11, 2019)

[Event Report] The 78th Breakfast Meeting – Knowledge from the field of financial gerontology for facing a super-aged society (July 3, 2019) >