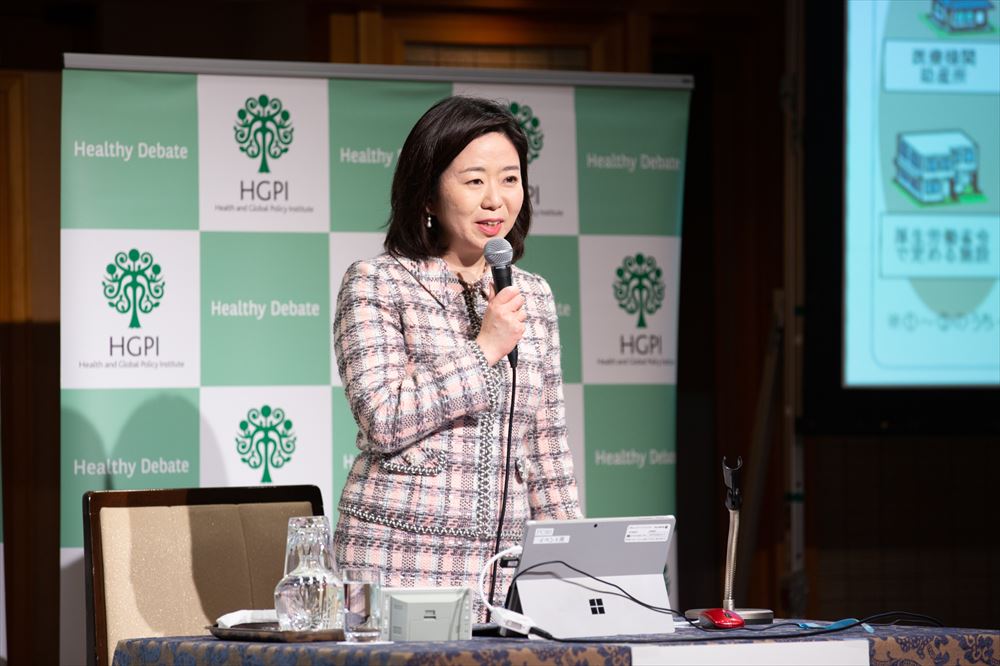 For the 45th Special Breakfast Meeting, we hosted member of the House of Councillors and Pediatrician Dr. Hanako Jimi. Dr. Jimi spoke about the current situation surrounding maternal and child health (MCH) policy in Japan and child-focused MCH policy which the Basic Law for Child and Maternal Health and Child Development that was enacted in December 2018 aims to achieve.

■ The need for child-focused MCH policy
The Child Welfare Act was enacted in 1948 with the backdrop of increasing numbers of war orphans after World War II. It aimed to protect the lives of children and provide them with safe, hygienic environments by making them eligible for child welfare. However, the provisions related to its foundational principles were not revised after its enactment, and for many years, it was criticized for its lack of clarity towards the status of children as subjects of rights. A partial revision of the Child Welfare Act in 2016 greatly altered the system of laws surrounding children by clarifying the rights of children in the Act’s first article, which includes its founding principles. This was a major reform that clarified the rights of children as a group and overcame a long-standing problem in Japan’s MCH policy. Current discussions on social security reform for all generations should also focus on creating an environment in which it is easier to have and raise children.

The Basic Law for Child and Maternal Health and Child Development aims to provide seamless health and development support required by children, their guardians, and pregnant women by creating connections across various policies including the Child Welfare Law, the Maternal and Child Health Law, Healthy Parents and Children 21, and the Act on the Prevention, etc. of Child Abuse. Its basic measures are (1) healthcare for children and expectant or nursing mothers, (2) insurance for children and expectant or nursing mothers, (3) education and awareness-raising for healthcare and other topics in mental and physical health including sex education in educational programs, (4) establishing systems to gather vaccination records and other such records, (5) establishing systems to conduct Child Death Reviews (CDRs), which gather information on causes of death among children, and (6) research studies. The MHLW established a council consisting of healthcare professionals, related parties, and those most affected and established an evaluation and publication process to review the basic plan, make cabinet decisions on the results of matters decided by that council, and review the plan at least every six years.

Additionally, some would like to use local governments’ CDR implementation status as a standard to measure each local government’s ability to implement measures related to children. While implementing each measure requires strengthening cooperation between local professional organizations, CDR has the potential to be an effective tool for building consensus between each party interested in CDR and improving policies at local governments.

Although the Cabinet, the MHLW, and the Ministry of Education, Culture, Sports, Science and Technology (MEXT) should take a collaborative approach to providing support for challenges facing children, each branch has the tendency to use separate implementation systems. Dr. Jimi would like Japan to create a ministry for children and families that will promote integrated and seamless child-rearing support in which these three ministries can advance as one. 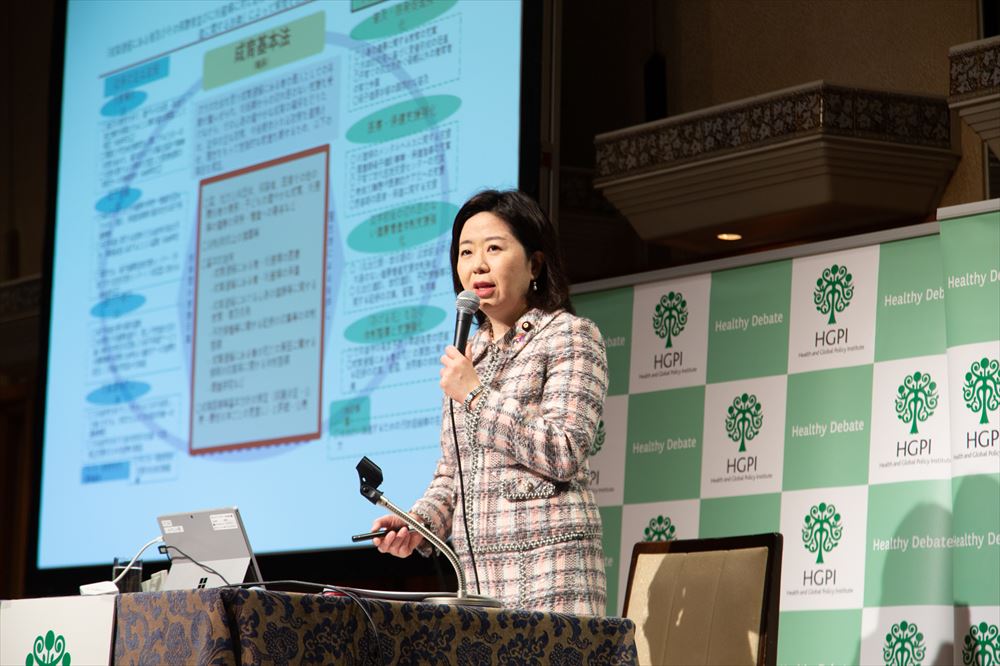 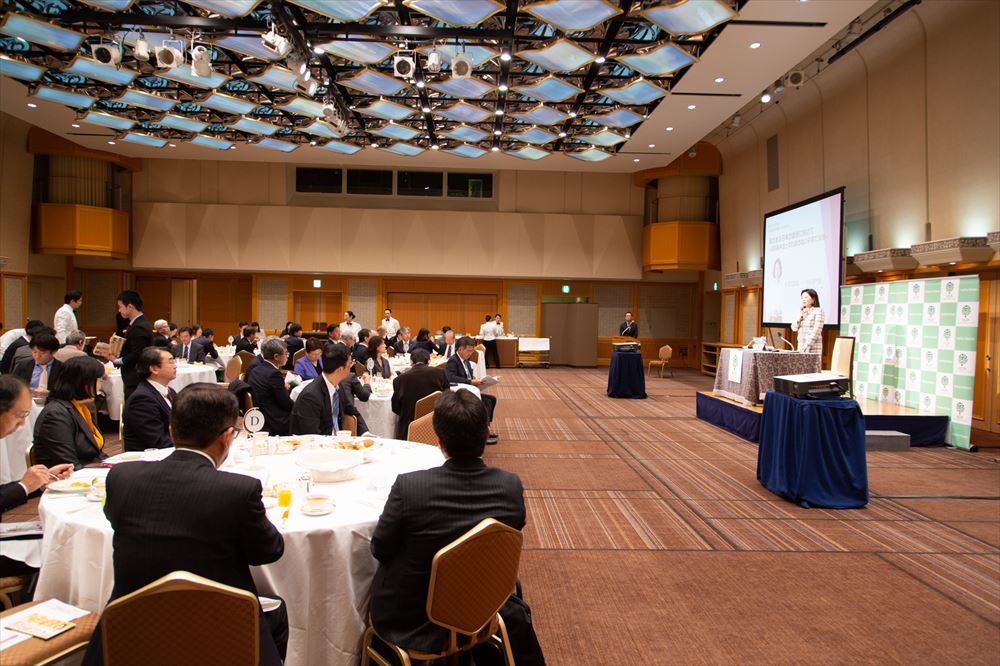 ■ Related policies that will be advanced in the future

Sex education
Based on the fact that low-dose birth control usage rates are extremely low in Japan compared to other developed countries, policies related to sex education and reproductive health are far behind the rest of the world and it is urgent such polices are promoted. Equal opportunities for women to protect their health and gain awareness towards nurturing the lives of the next generation must be secured. A survey conducted as part of a sex education pilot program run by the Tokyo Metropolitan Board of Education and the Tokyo Medical Association found that sex education provided by experts such as obstetricians and midwives acting as visiting lecturers was beneficial. Currently, MEXT and the MHLW are collaborating on a system to dispatch experts as visiting lecturers throughout Tokyo.

Measures against hearing loss
Measures against hearing loss that cut across the fields of welfare and healthcare must be taken. Currently, the Diet Members’ Federation for the Promotion of Measures against Hearing Loss is working to provide all children with opportunities to be screened for hearing loss to enable the early detection of hearing impairment and to be connected to rehabilitation and education. While the rights of children must be emphasized and activities undertaken to benefit them must focus on children, it is also important to discuss healthcare, education, rehabilitation, and welfare as part of those efforts. This is an example of embodying the foundational principle of the Basic Law for Child and Maternal Health and Child Development.

Postpartum care services
Mothers and children were eligible to receive postpartum care services for up to four months after birth, but after the government revised the Maternal and Child Health Act, that period of eligibility was extended to one year. It also obligated every municipality to make efforts to implement postpartum care services. The implementation of postpartum care services will make it easier to identify and provide adequate support to families at high risk of abuse, a top priority issue to address as a measure against Japan’s declining birthrate. Dr. Jimi strongly believes that teams of local obstetricians, pediatricians, midwives, and public health nurses can change Japan.

In Japanese society and politics, the voices of women and children are heard the least. As a politician, Dr. Jimi wants to promote various measures based on the Basic Law for Child and Maternal Health and Child Development to support child-mother attachments and create a more child-friendly society where it is easy to have and raise children by providing seamless support from pregnancy to adulthood.

A lively exchange of opinions was held with the audience during the question and answer session after the lecture. 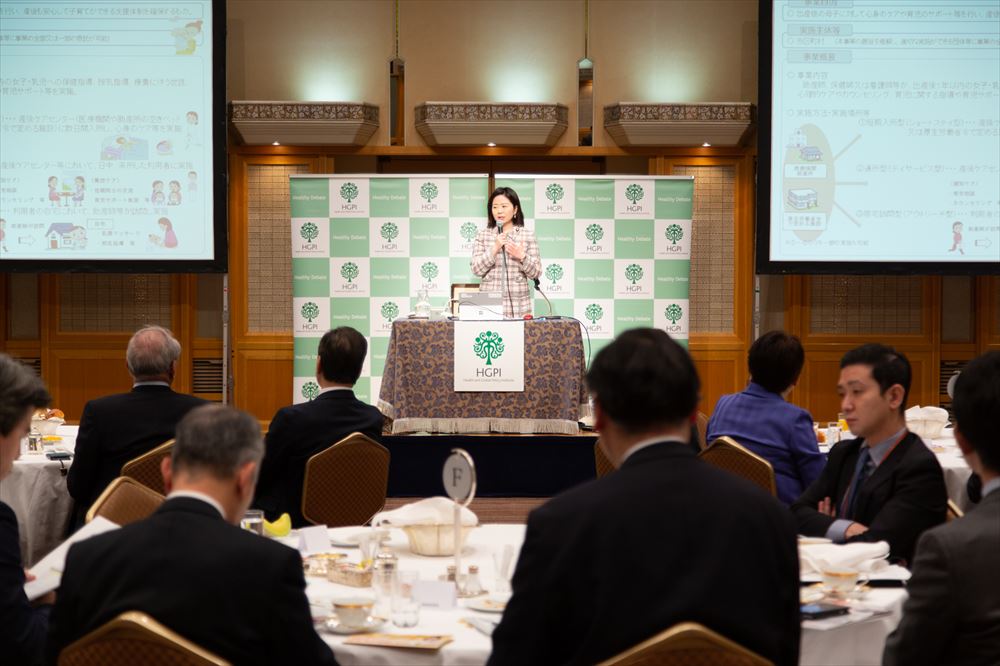 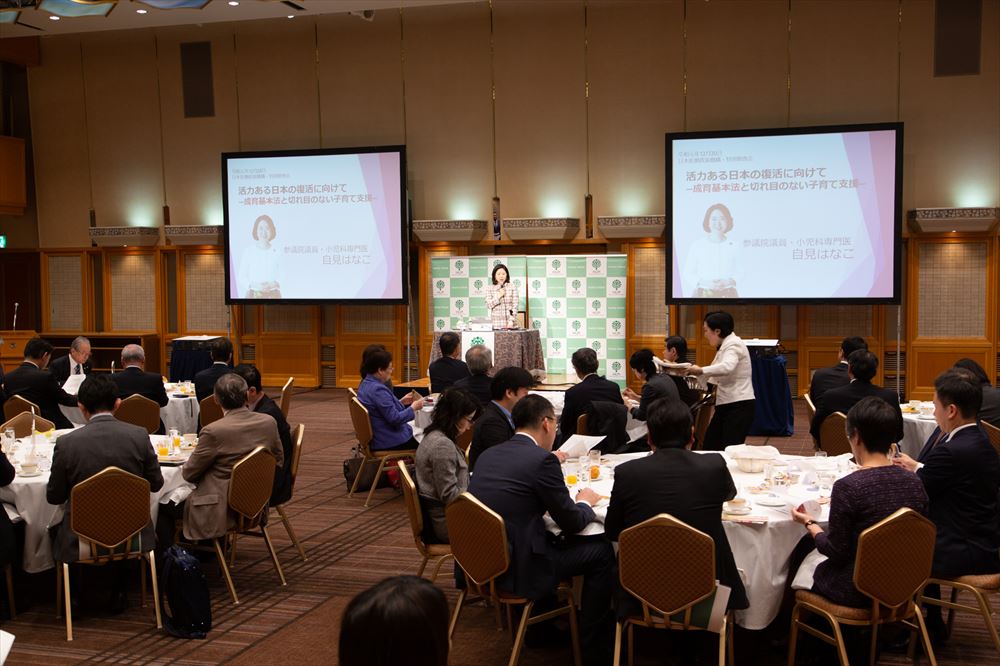 ■Profiles
Dr. Hanako Jimi
Dr. Jimi was born in Sasebo City, Nagasaki Prefecture. She graduated from the College of International Relations at the University of Tsukuba Third Cluster of Colleges in 1998 and graduated from the Department of Medicine at Tokai University School of Medicine in March 2004.She is a pediatrician and an associate professor at Tokai University School of Medicine. After working in the Departments of Pediatrics at University of Tokyo Hospital, Ome City Municipal General Hospital, and Toranomon Hospital, she was elected to the Japanese House of Councillors national proportional representation block for the first time in 2016. She has served as chairperson of the House of Councillors Committee on Health, Welfare and Labour as vice-chairperson of the Health, Labour and Welfare Committee of the Liberal Democratic Party’s Policy Research Council, and acting director of the Liberal Democratic Party’s Women’sAffairs Division. She has served as Parliamentary Vice-Minister of Health, Labour and Welfare since September 2019.

< [Event Report] The 46th Special Breakfast Meeting – Looking Back on 1,124 Days as Chief Medical and Global Health Officer – The Past and Future of the Healthcare System (December 11, 2020)