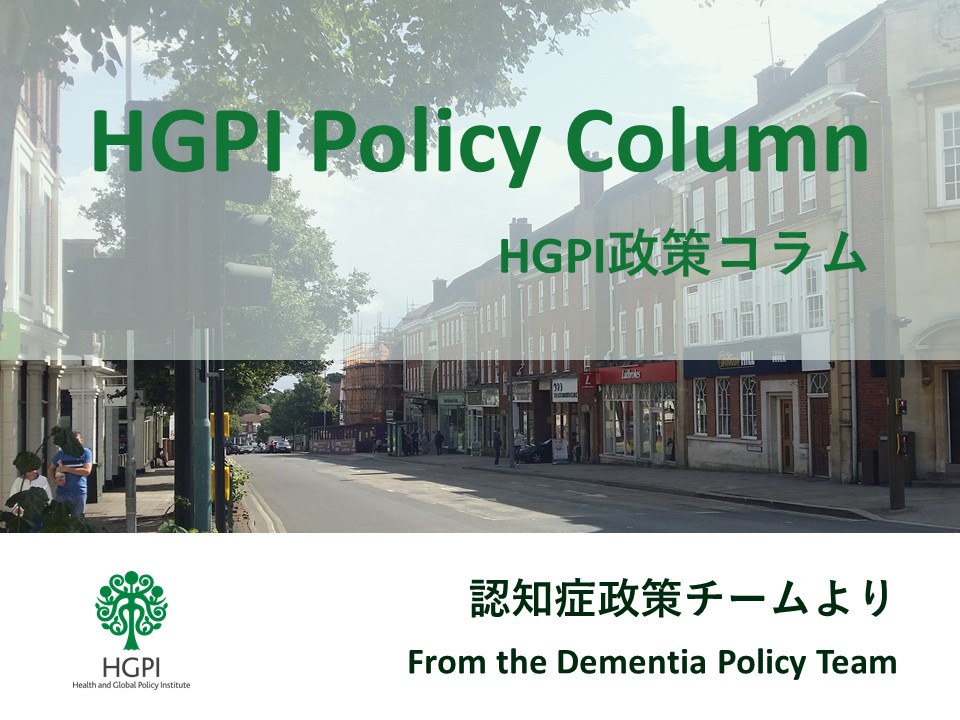 – It is difficult for minorities and people with limited financial resources to establish interest groups and their opinions are not being sufficiently incorporated during actual policy making cycles.

– When creating healthcare policy, failing to give deliberate consideration to the voices of patients and other healthcare beneficiaries may result in those voices being drowned out. Conscious action must be taken to elevate their voices in the policy making process and to ensure their voices are reflected in policy.

– Political leadership will be essential for advancing dementia policy. To bring about such leadership, people with dementia, their families, and their caregivers must continue to speak up.

Introduction
In our previous column, we discussed the importance of gathering experiences and opinions from each person and arranging them to create universal, objective information that can then be used to reflect the voices of people with dementia in policy. It seems safe to say that identifying what preparations and initiatives will be needed to generate collective wisdom from a scientific perspective is a topic that will require discussions that cut across disciplines. In this column, I would like to examine why it is necessary to listen carefully to the voices of the people most affected by an issue and those close to them from the perspective of the policy making process.

In past columns, we often discussed the status of efforts for advancing dementia policy around the world. (For further details, please see our column titled “The Position of Dementia Policy in International Society in 2021.” ) The WHO Global action plan on the public response to dementia includes the target, “75% of countries will have developed or updated national policies, strategies, plans or frameworks for dementia, either stand-alone or integrated into other policies/plans, by 2025.” Meeting that target will require 28 national strategies for dementia to be created annually for the next four years, meaning the situation is extremely difficult.

The most recent World Health Organization (WHO) report, “Global status report on the public health response to dementia,” which was presented in September 2021, also expresses concern on that point. Specifically, it identifies the following three obstacles to progress for dementia policies.

Examining the significance of communication from the people most affected by an issue in terms of the policy making process
We can summarize policy making in five steps. The process of enacting a new policy begins with “agenda setting,” when some aspect of the situation in society is recognized as a public problem that requires a solution. The next step is “policy formation,” which is when a solution to that problem is planned. The third step is “decision making,” which happens in the legislature. Fourth is “policy implementation,” when a policy is put into effect. Last is “policy evaluation,” when the effects of that policy are evaluated. This leads to a new cycle of revision and refinement. For the people affected by the issue in question, the first step is to get them to recognize that issue as a public problem. To successfully ensure that a policy addresses their specific needs, the processes for planning solutions and making decisions are especially important.

In the policy making process, the voices of people in all positions in society including those who are members of minority groups should be listened to and reflected in policy. In practice, however, this is rarely the case. Why is that? Generally speaking, in the policy making process, various people and groups affected by a public issue (often referred to as “actors,” “stakeholders,” or “players”) work through various channels to see their own interests reflected in policy. (These interests include not only economic interests, but also personal beliefs and values.) These groups are referred to as “interest groups” or “pressure groups.” From the perspective of satisfying pluralistic interests, the creation of these groups and the actions they take for the enactment of policies in line with their interests can be considered a necessary element of a democratic society. However, shortly after the formation of such groups, deeper links begin to form among special interest groups, politics, and Government. Sometimes they are also joined by researchers, specialists, local governments, business circles, the mass media, and critics. This leads to the creation of “ministry communities” – groups that act as ministries or agencies and make policy decisions without open, public discussions. People who cannot join these communities lose the opportunity to see their own interests reflected in policy.

To ensure their interests are reflected in the policy making process on a continuous basis, these groups require some sort of financial support to organize and maintain activities. Groups that possess such financial resources like those representing producers, suppliers, and businesses can organize and continue activities more easily. In contrast, consumers, users, and recipients have fewer financial resources to draw upon, so it is difficult for them to maintain activities after forming interest groups. This means it requires great amounts of effort to maintain an organization on a national scale and leads to situations in which many people are unable to have their opinions heard. In the field of healthcare policy, patients and other healthcare beneficiaries are in the latter position, which is why it is important that deliberate steps are taken to ensure their interests are reflected during the healthcare policy making process. In light of that, participation from patients and other healthcare beneficiaries on various committees established by the national Government and local governments has been increasing in recent years. We can expect this trend to become more firmly established moving forward. It is also likely that asking patients and other healthcare beneficiaries to participate in planning the structure of such committees before they are formed will become more commonplace.

As I have discussed, in the policy making process, people can influence the Government by speaking up for their own interests. We also have the option of leaving society to realize our own interests. To give one example, companies that are dissatisfied with one country’s policies may move their headquarters to another country. When people begin speaking up or leaving, the Government is forced to respond through policy. If these two actions are impossible, however, the problem will not be communicated fully and the Government might not take action. To avoid that, we must speak up so the interests of patients and other healthcare beneficiaries are reflected in policy with the goal of building an inclusive society for everyone. (For more on the topics of “speaking up” and “leaving,” please refer to works such as Exit, Voice, and Loyalty by Albert O. Hirschman.)

Society is shaped by the voices of those most affected by an issue
In this column, I examined the significance of disseminating the voices of the people most affected by an issue in terms of the policy making process. On the international stage, “lack of political leadership” has been pointed out as one of the obstacles hindering the advancement of dementia policies. Although the Government of Japan has made progress in advancing policies in recent years, we cannot know when and how the political situation might shift. In particular, the impact of the Coronavirus Disease 2019 (COVID-19) pandemic, which we have been living with since last year, may result in significant changes in the environment surrounding social security policy. Dementia policies require medium- and long-term efforts. To make sure dementia policy remains a high-priority policy topic in each country, we must disseminate the voices of people living with dementia and do our best to synthesize those voices into collective wisdom.

HGPI Policy Column (No.25) -from the Child Health Team- >