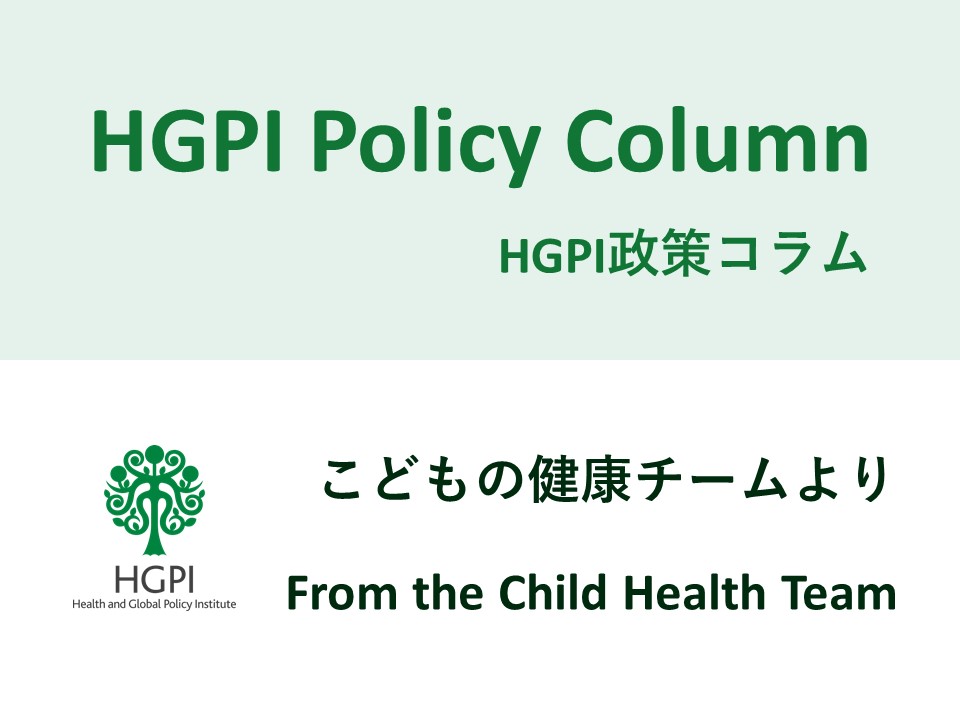 ・While their subject matter is grim, Child Death Reviews (CDRs) are verification systems used to collect or register necessary information concerning child deaths. They allow child deaths to be examined in detail so preventable deaths can be prevented.

・Although there are signs that there are preventable child deaths in Japan like in various preceding studies and reports from abroad, a CDR system has yet to be implemented in Japan.

・Implementing a CDR system will require cooperation from healthcare institutions, educational institutions, government agencies, and the police. Also, systems for gathering and verifying information must be built in each region.

The Basic Law for Child and Maternal Health and Child Development* which was unveiled in December 2018 emphasizes “Respect for the dignity of people in the process of growth and ensuring their healthy mental and physical development.”[1] In addition to providing a definition of the growth process, outlining fundamental principles, and describing the obligations of the Government, local public bodies, guardians, and healthcare providers, this law also covers the establishment of systems for gathering and verifying records. This column will discuss current issues within processes for gathering and analyzing records and provide an overview of Child Death Review, a system for which the national Government is currently in the process of implementing.

*At time of writing, the Government has yet to assign an official English translation to the full title of the Basic Law for Child and Maternal Health and Child Development. One it might be translated is, “Act on Comprehensive Promotion of Measures to Seamlessly Provide the Necessary Healthcare, etc. to Persons in the Process of Growth and their Guardians and to Expectant and Nursing Mothers.”

What are Child Death Reviews?
Child Death Reviews (CDRs) are systems for registering and verifying child deaths for the prevention of future deaths.[2] The concept has not yet taken root in Japan, so consensus has not been reached on a Japanese term for CDRs. They are sometimes referred to as “Inquiry on causes of child death” or “Child death verification for prevention.” CDR is a process in which people from various disciplines or their institutions (such as healthcare institutions, police and fire departments, and related government agencies) examine the circumstances surrounding the death of a child based on various types of information. This information includes the child’s medical history, household environment, and the series of events that directly led to their death. CDRs are used to generate effective interventions for preventing child deaths and many countries have implemented CDR programs. There are many death investigation systems in Japan that its CDR system will have to cover, so one of the purposes of the CDR system that is currently being discussed in Japan is to establish a continuous, comprehensive system.

The History of CDRs in the United States
The history of CDRs in the U.S. begins in Los Angeles, where the first registry and verification system for child deaths was established in 1978. CDRs gained wider recognition after the Missouri child fatality study was released in 1993.[3] The study examined the deaths of 384 children younger than age five and found that approximately one-third of the deaths, or 121 cases, were caused by abuse. Among those 121 cases, however, only 48% of the death certificates listed abuse as the cause of death and the Division of Family Services had substantiated only 79% of them. Only 39% of those deaths were reported as homicides. Afterwards, a legal framework requiring CDRs to be conducted on every death of a child under the age of 18 was implemented. In addition to deaths caused by abuse, that law also requires investigations for deaths from Sudden Infant Death Syndrome (SIDS), unknown causes, and other causes of death considered preventable. Those investigations are carried out by multidisciplinary Child Death Review Teams that include physicians, police, child welfare service providers, public prosecutors, lawyers, and medical examiners.

The many preventable deaths in Japan and Japan’s delay in implementing CDRs
Japan has been slower than other countries in creating a legal framework for CDRs and has yet to establish a system for gathering information and conducting reviews. Currently, the only method for obtaining an overview of child deaths in Japan is by referring to Notification of Death forms which are submitted according to death certificates. Detailed reports on child deaths started being compiled and released in the 2010s. The Japan Pediatric Society’s Death Certificate Verification Committee conducted a retrospective pilot study that examined deaths that occurred in 2011 within four regions: Gunma prefecture, Tokyo, Kyoto, and Kitakyushu City.[4] It found that 27.4% of all deaths had a moderate or higher likelihood of being preventable. It also found that 7.3% of all deaths had a moderate or higher likelihood of abuse and that 3.0% of all deaths had high likelihood of abuse. Another retrospective study conducted in pediatrician training facilities nationwide reviewed examination records (specifically, medical records possessed by healthcare institutions) for all deaths of children ages 18 or under from 2014 to 2016.[5]. A total of 2,348 cases from 163 institutions were examined. Among those, 638 deaths (27.2%) were due to external or unknown causes, 118 deaths (5.0%) were likely to have involved malnourishment, and 932 deaths (39.7%) had a moderate or unknown likelihood of being preventable. It concluded that a total of 1,333 deaths (56.8%) required further, detailed investigation. These findings suggest that preventable deaths occur in Japan in numbers comparable to those reported in reviews from abroad.

Recent developments in implementing a CDR system
One recent development in establishing a CDR system in Japan was the adoption of an additional resolution by the House of Representatives that affected the revised Child Welfare Law passed by the Diet in 2017. That addition provides a clause for considering the introduction of CDRs to determine the causes of all child deaths as measure against child abuse. A model project for the Basic Law for Child and Maternal Health and Child Development which was enacted in 2018 and 2019 is being conducted in specified regions based on the Act on Promotion of Policy about Death Investigation with the aim of establishing a national CDR system in 2022.

Efforts for gathering clinical knowledge using an elaborate verification process based on review and for linking that knowledge to specific proposals will be needed to establish a useful CDR system. Notification of Death forms and death certificates are not considered suitable for data analysis because the information they contain is extremely limited. Determining how to overcome the obstacles facing efforts to gather information which is distributed among various specialized organizations such as educational institutions, healthcare institutions, government agencies, and police departments in an appropriate manner will be a crucial step when building a CDR system. The circumstances in each region must also be considered when building verification systems. To reduce the number of preventable child deaths in Japan, it is desirable that a CDR system is built as soon as possible.

HGPI Policy Column No.16 -from the Child Health Team- >