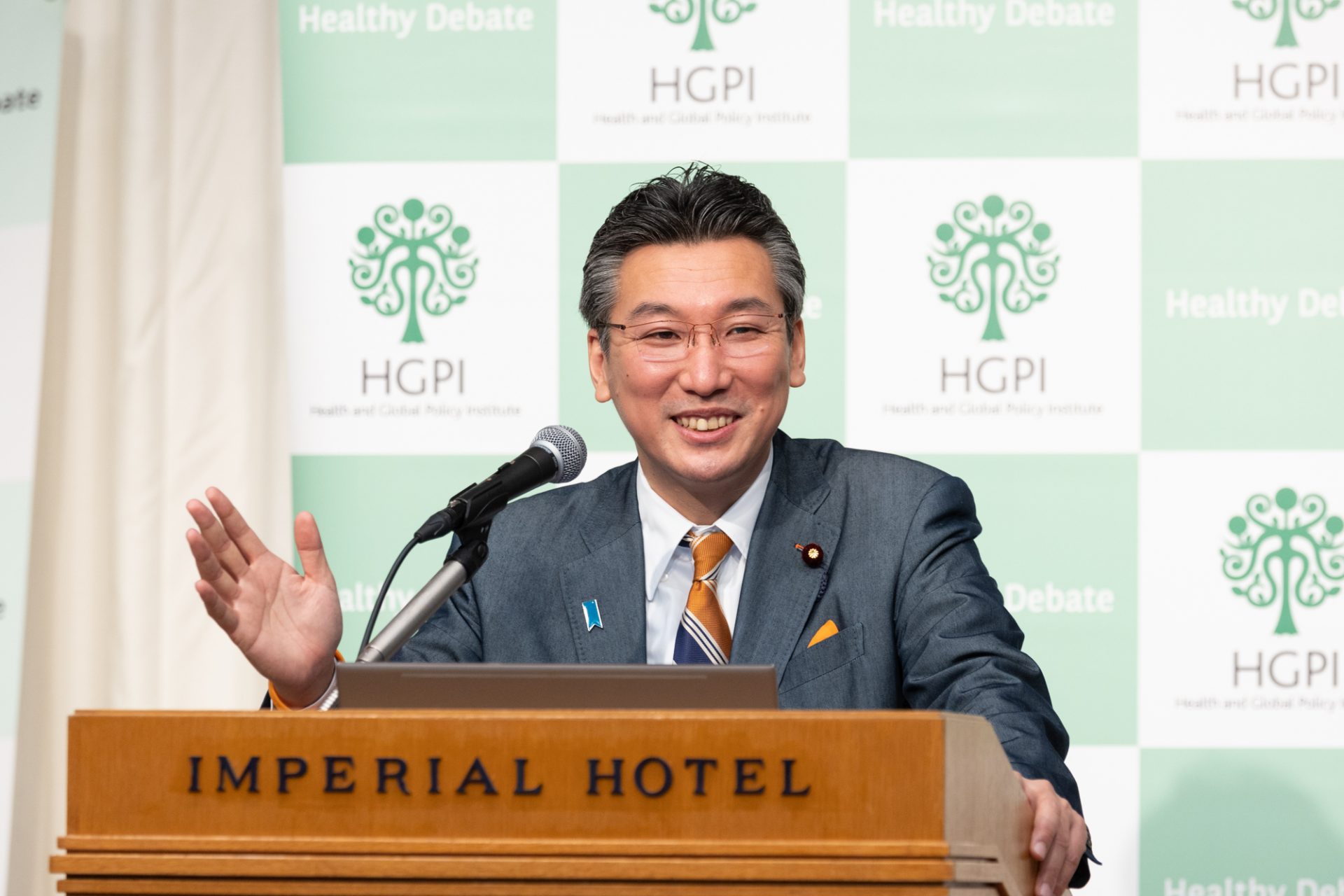 For the 47th Special Breakfast Meeting, we hosted Mr. Gaku Hashimoto (Member of the House of Representatives, Chair of the Committee on Health and Welfare, and Former State Minister of Health, Labour and Welfare (MHLW)).

To prevent the spread of COVID-19 infections no meals were served, the venue was thoroughly disinfected, the flow of people at the venue was controlled, and guest capacity was limited.

■ The meaning of social security

Social security was established with an aim to function on the basis of everyone supporting one another so that the country and society can live in peace and security. One objective shared by Diet members is keeping Japan safe. National security must always be considered as unforgivable actions such as the war between Russia and Ukraine have occurred. However, it is not enough to only be ready for external threats. Problems like poverty, disease, and aging are enemies of human society that we will always face. For society to be safe and secure, we must be prepared for such challenges. These preparations include establishing insurance systems like the health insurance system, the pension system, and the unemployment insurance system. These systems were established so people can support each other. For example, if someone loses their ability to work due to a disability or similar reason, Article 25 of the Constitution of Japan guarantees the “right to maintain the minimum standards of wholesome and cultured living.” The term “security” is applicable in the sense that Japan protects people’s safety through these systems. It is the presence of both “national security” and “social security” that enables us to live in safety and with peace of mind.

■ The outlook for Japanese society and issues facing social security

Right now, Japan’s population is on the decline, and the number of elderly people age 65 and over has been rising. In the future, a shrinking working-age population will also contribute to population decline. Some people have been saying society will enter an era of population aging for almost four decades, and we have been preparing systems so we can be ready. That is exactly what is happening now. By popularizing long-term care insurance services and similar services, we were able to meet the needs of the current era. However, in the future, the size of the working-age population will become even smaller as the childbearing generation shrinks.

From a public finance perspective, social security expenditures are continuing on an upward trend. Projections show spending on social security benefits will continue to grow due to support provided to programs like pensions, healthcare, long-term care, and childcare. However, we should be able to finance these programs if we aim for sufficient economic growth. Pension spending as a proportion of GDP is also trending upwards, but if pension spending is adjusted according to economic growth by incorporating a mechanism called the “macroeconomic slide,” pensions are unlikely to strain public finances.

Healthcare and long-term care are two fields that lack such a mechanism. This would also not be an issue if the economy continued to grow alongside spending, but rapid economic growth is difficult to achieve. This means the current generation will continue shouldering the burden of increasing expenditures, which will put pressure on their daily lives. This remains a major issue.

One strength of Japan’s healthcare system is that compared to other G7 countries, both average and healthy life expectancies are increasing. We must think about how to overcome the challenge of retaining the strengths of that system while addressing cost-associated burdens.

In light of these circumstances, we can see that social security will place an increasing burden on public finances in the future. In addition, due to a shrinking workforce, there are fewer people to support fields like healthcare and long-term care. Securing human resources for these roles is also becoming an issue. To address these issues, the number of people who are young at age 65 will continue increasing in the future, so we may have to ask them to provide their labor. We must also consider methods of handling workloads more efficiently with fewer people, such as by improving efficiency in workplaces (not in terms of public finance) and applying technology and other tools.

■ Issues for relief needed after disasters

As Japan’s population ages, we see that many of the people who gather at evacuation centers after disasters occur are elderly. At times like that, rather than emergency rescue services and care for injured people, what is needed is care for chronic conditions or welfare and long-term care. Compared to the responses to past disasters like the Great Hanshin Earthquake, the quality of post-disaster support has changed, and we must recognize and respond to those changes. 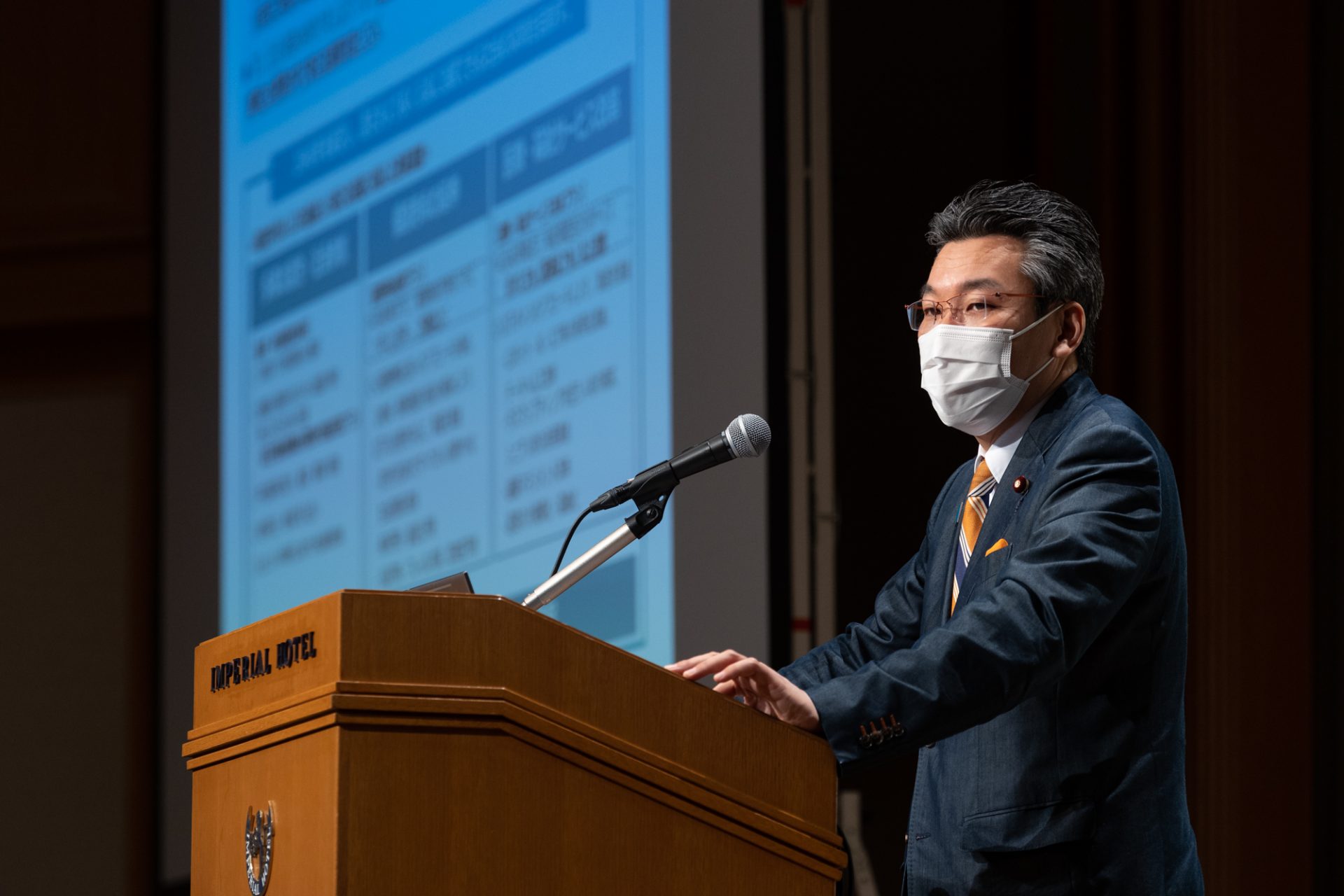 There are three guidelines being considered with the objective of comprehensive healthcare provision system reform.

On the topic of finances in the health insurance system, in anticipation of rising future healthcare expenses, medical copayments for late-stage elderly people who meet certain income requirements will be increased to 30% from the current rate of 10%. Methods of avoiding a sudden increase in the burden were discussed, and included stepping the rate up to 20% first. The discussion is now heading in a direction in which the burden will be increased gradually for those who can shoulder it.

Every two years, the medical service fee schedule is revised and the drug pricing system is reviewed. However, some are apprehensive about lowering pharmaceutical prices to cover other healthcare expenses due to the risk of pharmaceutical manufacturers disappearing from Japan, and there are concerns about the sustainability of the current status quo. Given the current need for COVID-19 countermeasures, Japanese pharmaceutical manufacturers are also moving rapidly to develop vaccines, but these efforts are lagging behind the rest of the world. In the future, we want to catch up. 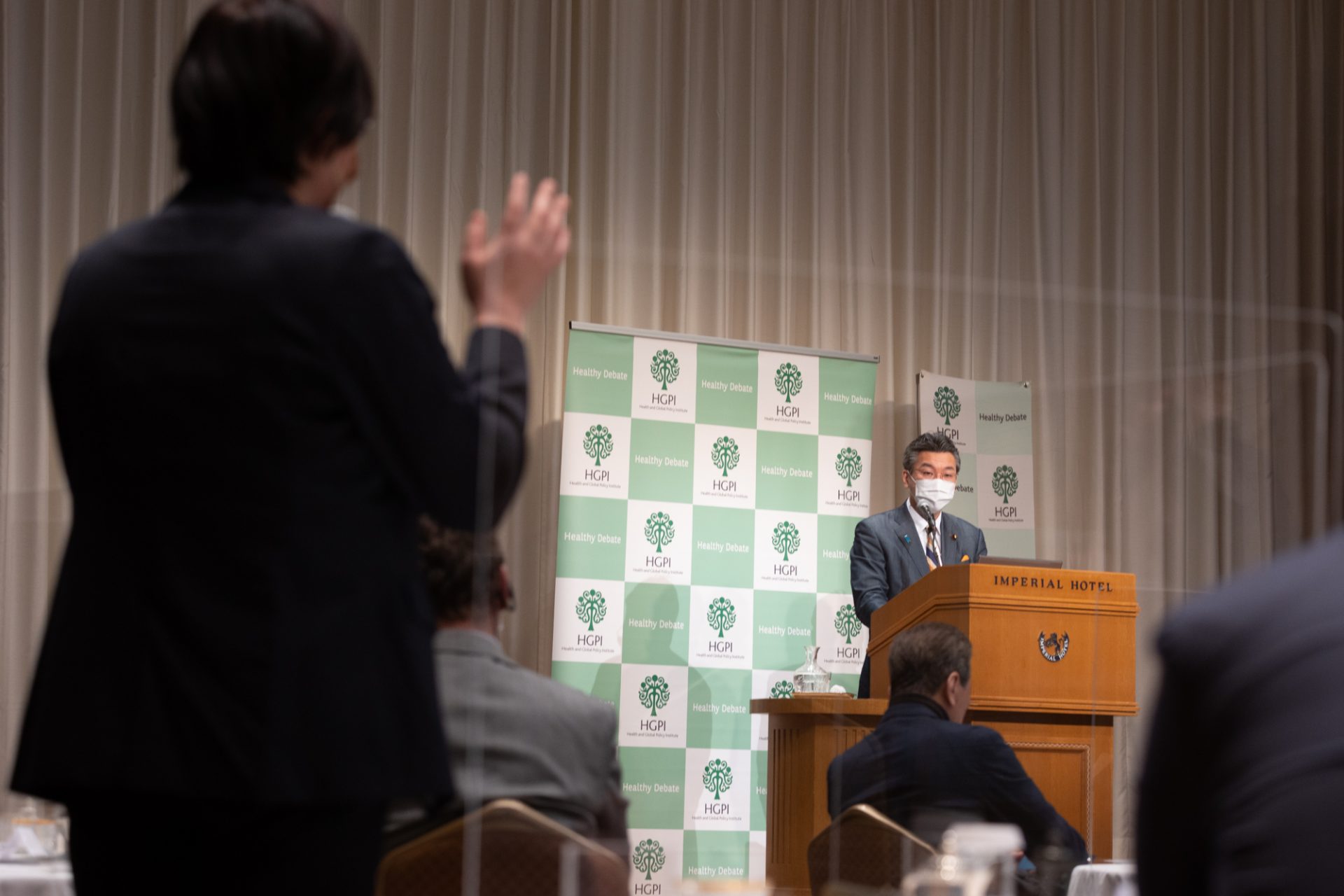 A question-and-answer session with the audience followed the lecture, and a lively exchange of ideas took place.

Mr. Gaku Hashimoto (Member of the House of Representatives, Chair of the Committee on Health and Welfare, and Former State Minister of Health, Labour and Welfare(MHLW))

[Event Report]The 46th Special Breakfast Meeting –Looking Back on 1,124 Days as Chief Medical and Global Health Officer – The Past and Future of the Healthcare System (December 11, 2020) >