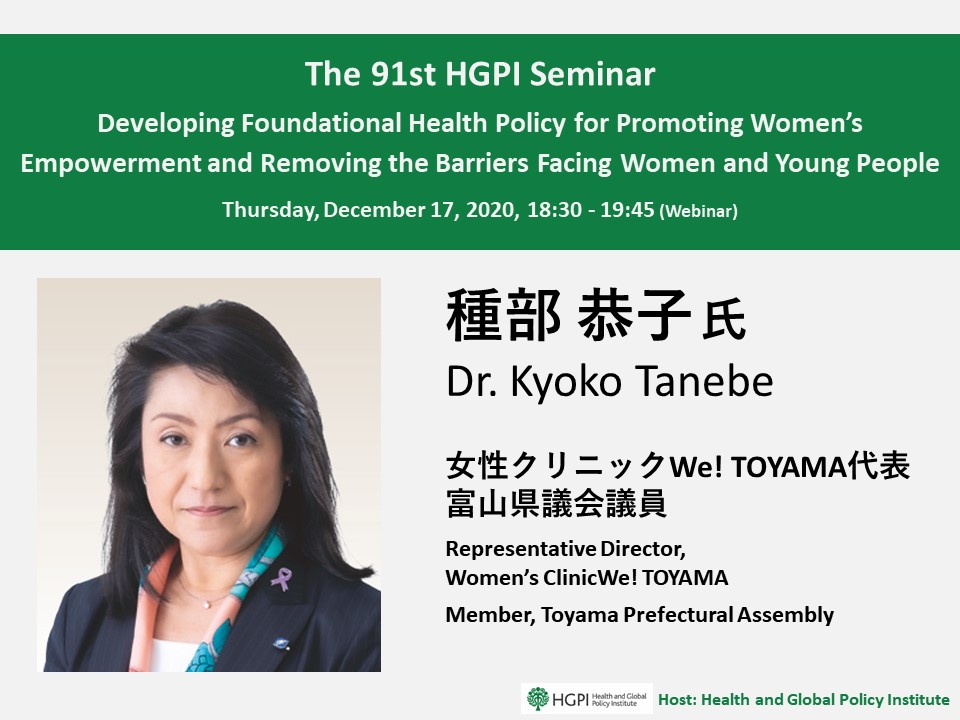 For the 91st HGPI Seminar, we hosted Dr. Kyoko Tanebe, who is a gynecologist and serves as Representative Director of Women’s Clinic We! TOYAMA and as a member of the Toyama Prefectural Assembly. From the perspective of health policy for promoting the advancement of women, Dr. Tanabe spoke about information we should know about women’s bodies and on the relationship between women’s health and the social environment surrounding women.

■The current state of society surrounding women in Japan
To offset labor shortages accompanying accelerating population decline and to secure a sufficient quantity of labor, efforts are underway in Japan to draw out the potential of women as a source of labor and encourage more workforce participation among women. Until now, labor force participation for Japanese women has followed an M-shaped curve with the dip occurring during pregnancy, childbirth, and child rearing. Meanwhile, in Scandinavian countries like Sweden, women’s labor force participation rates are extremely high and they remain high during pregnancy, childbirth, and child rearing. Based on excellent precedents like Sweden, Japan is promoting policies related to gender equality to increase the labor force participation rate among women. In addition to securing a sufficient quantity of labor, Japan must also improve its workforce quality to increase overall productivity. Promoting the active participation of women in the workforce will enable women to focus on new fields that have been overlooked in Japan’s male-dominated society. This will result in various innovations originating from women’s fresh perspectives. To achieve this, it will be crucial to involve many women in decision-making to improve workforce quality and create a better future for Japan. 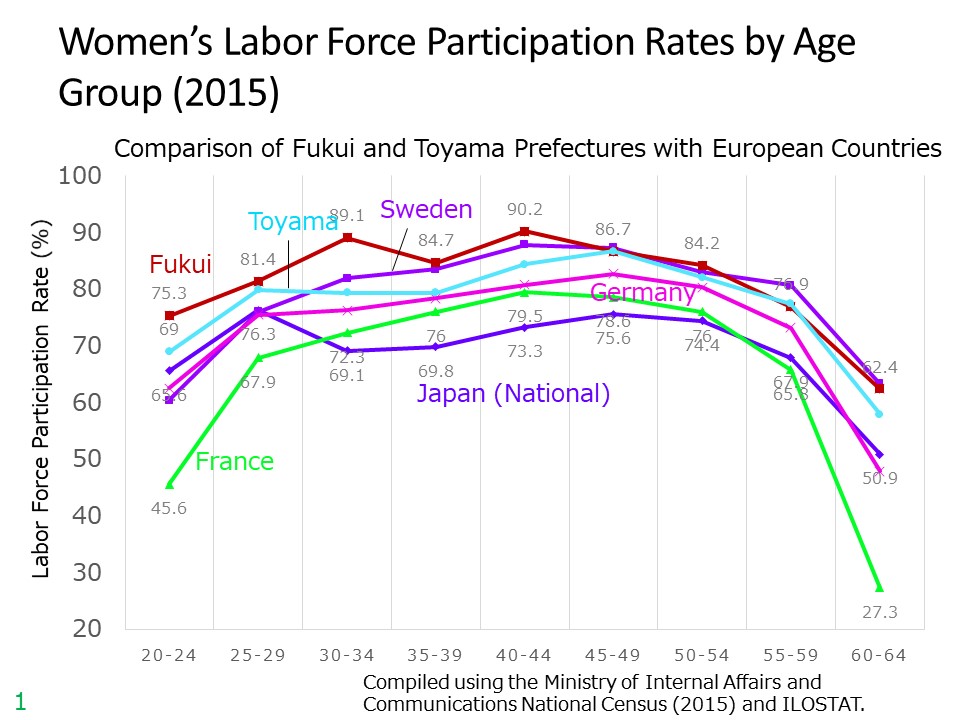 The M-shaped curve in women’s labor force participation rate has already been eliminated in certain prefectures like Fukui and Toyama, where women’s labor force participation rates are as high as those in Northern European countries. However, if we look at the progress of women’s advancement in regions with high labor force participation rates, we cannot say that women are fully participating in decision-making roles such as in management. For example, women’s ratios in management positions in companies, as members of prefectural assemblies, and as presidents of residents’ associations are very low in the Hokuriku region. Although the employment rate for women is high, stereotypes concerning gender roles remain strong.[2] Even though women are filling all types of roles at the workplace, in homes, and in communities, stereotypes are preventing them from being able to participate in decision-making. In addition, it has been shown among OECD countries, women in Japan get the least amount of sleep.[3] The concentration of many roles on women suggests that women are being forced to expend their own health to live their daily lives. A society in which women cannot play active roles without having to sacrifice or give up on anything is not a society in which women’s empowerment and participation can be truly promoted.

Furthermore, examining willingness to seek promotions among women who have recently entered the workforce and are at the beginning of their active roles in society, motivation was trending upwards until around 2011 but has declined in recent years. Meanwhile, the number of women who do not want to be in management positions has increased. One of the reasons behind this is rooted in the fact that the ages when people develop their careers coincides with the ages women’s fertility[4] is the highest, meaning that women must make a trade-off between career advancement and having children. In addition, in Japan, where the prevailing attitude is that women must have children after marriage, an increasing number of women are choosing to either avoid or postpone marriage to escape public pressure to have children after marriage This has resulted in a decline in the marriage rate. To improve this situation, women must be provided with opportunities to learn about women’s health so that they can establish their own life plans, and efforts to promote women’s empowerment and participation in society and efforts to support women’s health must be packaged together. 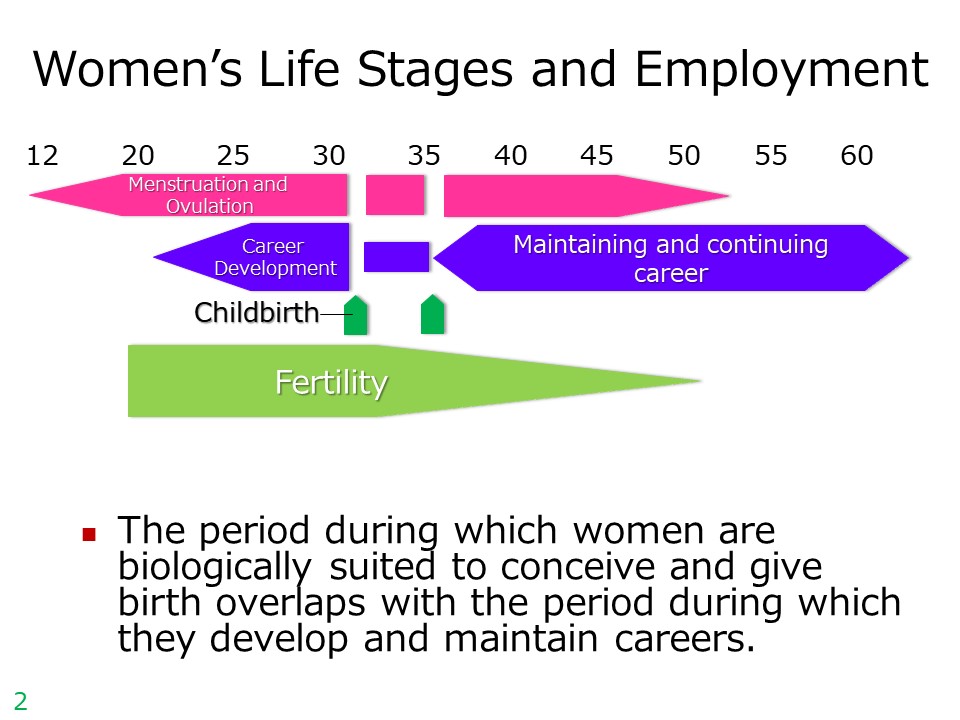 ■The importance of establishing a life course approach to overcome women’s health issues
As described below, women are at risk to health problems due to a variety of factors, such as (1) health issues specific to women; (2) health issues caused by social determinants; and (3) health issues related to reproductive health.[5] Furthermore, the health issues women face vary significantly by life stage, which is why it is important for women to be provided with comprehensive support based on a life course approach that considers the various diseases or risks that occur throughout early childhood, adolescence, adulthood, and late adulthood, and to encourage preventive action.

■Women’s health issues caused changes in modern lifestyle
The way women live their lives has changed dramatically over the past three decades. Compared to women 30 years ago, women today experience menarche earlier, have their first child later, and give birth fewer times over their lifetimes. This has resulted in far more menstrual cycles over the life course and an increase in gynecological diseases such as endometriosis. Endometriosis not only causes menstrual pain and pain during intercourse, it also leads to increased risk of infertility and cancer. Endometriosis also causes fertility to decline earlier, so women with endometriosis who want to have children must plan their lives in advance.

The increase in menstrual cycles experienced by modern women affects performance in the workplace in many ways. However, low-dose birth control can be used to prevent declines in performance. The pill thins the endometrium, a source of menstrual pain, bringing various benefits such as reduced menstrual pain, less blood loss, and better quality of life. However, compared to other countries, usage of the pill among Japanese women is still low, and information about the pill is still not widely available in Japan. Even if people are taught about the pill in junior high and high school, the information is difficult for them to relate to and few of them remember it. Educational opportunities should be provided to those who are at the age when they are about to join the workforce and start building a career so they can learn about the pill.

■Gaps in sex education in Japan
Sex education in Japan mainly focuses on contraception, unexpected pregnancy, and STDs. Little information is provided on (1) fertility and (2) avoiding DV. Knowledge on these topics is highly necessary for life planning.

(1) Fertility
Fertility changes dramatically as a woman ages. Even if someone ovulates and menstruates normally, egg number and quality rapidly declines after age 37, making it more difficult to conceive. Although more couples are undergoing fertility treatment, fertility treatment requires many hospital visits, making it difficult for working women to find time to visit treatment facilities or adjust their schedules. Balancing work and fertility treatment is also a source of mental strain. Women require knowledge about fertility and career planning so they can think realistically when creating life plans.

(2) Avoiding DV
DV refers to violence committed by a current or past partner in an intimate relationship, such as a spouse or lover. DV is not only limited to violence of a physical nature; it also includes psychological and sexual violence. Because psychological and sexual violence are often invisible, both the perpetrator and victim are often unaware that what is occurring constitutes DV. For example, not cooperating with a partner’s wishes to use contraception is a form sexual violence, while actions such as ignoring someone, shouting at them, and monitoring their e-mails are psychological violence. It can be difficult for a victim to escape from DV once a relationship of control has been established between the dating or married couple. Therefore, it is important to avoid DV during the earlier stages of relationships, such as during dating, and to prevent situations from which victims of DV cannot escape.

Knowledge about fertility and DV is essential for women to experience relationships and make life plans for  marriage, childbirth, and balancing a career with child rearing. Sex education in Japan often turns a blind eye towards sex or treats sex as a forbidden topic. In the future, we must review the structure and content of sex education in Japan so women can acquire the knowledge they need to make fulfilling life plans.

[1] An approach in which disease and risk prevention during the prenatal period and early childhood are linked to health in adulthood and old age.
[2] The fixed division of roles based on gender, or deciding the roles of men and women based on fixed attitudes. For example, “Men should work and women should stay at home,” or “Men should handle central work tasks and women should handle supplementary ones.”
[3] Source: OECD Gender Data Portal: https://www.oecd.org/gender/data/OECD_1564_TUSupdatePortal.xlsx (Accessed January 21, 2021).
[4] The ability to conceive and bear children.
[5] Sexual and reproductive health.
[6] Weakening of the muscles or joints.
[7] The physical state of decreased mobility due to musculoskeletal system damage.

Dr. Kyoko Tanebe (Representative Director, Women’s Clinic We! TOYAMA; Member, Toyama Prefectural Assembly)
Dr. Tanebe graduated from the University of Toyama’s Faculty of Medicine in 1990 and Graduate School of Medicine and Pharmaceutical Sciences in 1998. After working at Toyama Medical and Pharmaceutical University Hospital and the Obstetrics and Gynecology Department at Aiiku Hospital, she became the director of the Women’s Clinic We! TOYAMA in 2006 and its Representative Director in 2019. Aiming to tackle issues facing society outside of the scope of medicine, she ran a successful campaign in Toyama Prefecture’s unified local elections and joined the Toyama Prefectural Assembly in April 2019. Her main positions include: Member, Special Committee on Intensive Policy, Council for Gender Equality, Cabinet Office; Executive Director, Toyama Medical Association; Standing Director, Japan Association of Obstetricians and Gynecologists; Vice Chairman, Public Service Promotion Committee, Japan Society of Obstetrics and Gynecology; Member, Committee for Improving the Living Environments of Children, Japan Pediatric Society; and Board Member, Toyama Association of Obstetricians and Gynecologists.

[Event Report] The 90th HGPI Seminar – Examining the ideal vaccination system for Japan and current efforts of the Expert Council on Promotion of Vaccination (November 12, 2020) >