[Event Report] The 89th HGPI Seminar – Treating the “Untreatable” – How the UK is Incentivizing New Antimicrobial Development to Fight the AMR Crisis (October 19, 2020) 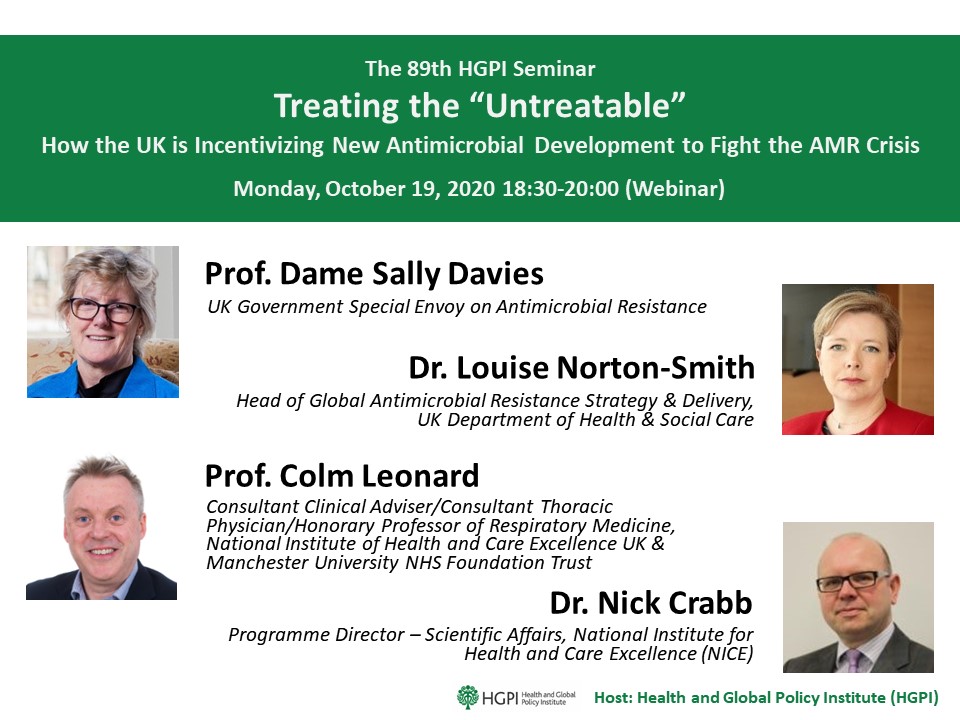 For this HGPI Seminar, we hosted four speakers to discuss the UK’s vision for combatting AMR, including the need for international collaboration, and the UK’s novel pull incentive for promoting the development of antimicrobials.

In light of the situation surrounding COVID-19, the seminar was held online.

■ Dame Sally Davies “The path toward a world safe from AMR, and the role of pull incentives to that end”

Infectious diseases are treatable because we have the medical armory to do so. Tuberculosis, sepsis, and even secondary infections arising from COVID-19 such as bacterial pneumonia are currently treated with antibiotics. Cancer treatments, caesarean sections, hip operations and organ transplants all require antibiotics to help prevent or treat infections that occur during or as a result of these procedures. But with more and more antibiotics being consumed, but fewer and fewer novel antibiotics being created we are facing a real and increasing issue of having no effective treatments.

AMR is happening right now, alongside COVID-19. Countries across the world are seeing first-hand the effects of a global health pandemic and an as-yet uncurable virus. COVID-19 is showing us what would happen to lives and economies if we don’t act on AMR. Yet innovative work is happening – the COVAX program has brought together nations to procure COVID-19 vaccines and ensure equitable distribution. Similar to the COVID-19 vaccine, it is important that efforts be made to provide antibiotics equitably, timely, and affordably across the world.

Global success on AMR will depend on the sum of our national parts. Japan has demonstrated strong leadership on AMR through its National Action Plan. Japan has also pushed for actions on AMR during G7 and G20 meetings. It is hoped that Japan will continue on with its successes, supporting international efforts on antimicrobial stewardship and helping to stabilize the supply of antimicrobials.

Novel mechanisms are needed to encourage pharmaceutical companies to bring new antimicrobials to the market. Specifically, pull incentives can guarantee the sustainable use and supply of antimicrobials. The UK has led this effort through the implementation of a pull incentive for two antimicrobials. However, the UK comprises only 3% of the global drug market. Success with an incentive depends on different countries, such as Japan, pursuing their own innovative incentives

■ Louise Norton-Smith “The need for global collaboration on AMR countermeasures”

Nowhere is immune to AMR. Currently, 700,000 people across the world die of drug-resistant infections every year. It is estimated that 8,000 people die each year of AMR-related causes in Japan. For high-income countries, such as Japan and the UK, this is particularly threatening to the surgery, radiotherapy and immunotherapy used for cancer treatment, given that cancer patients are much more susceptible to infections. Without taking urgent global action now, the death toll from AMR could balloon to 10 million lives each year by 2050. This is more than die each year from cancer currently.

No new antimicrobials have been produced this side of the millennium. As it stands, pharmaceutical companies are disinvesting or even facing bankruptcy because of the high upfront costs required for them to produce antibiotics, which compounded by the relatively cheap price which patients pay for them. This is not sustainable for patients or for the commercial market. Millions of people still lack access to essential antimicrobials, with more dying from no treatment than from failed treatment. There is a shortage of antimicrobials in the pipeline. The world must fix this market failure so that access for patients is never compromised.

Our ultimate aim as policymakers is to bring more antimicrobial products to market for patients and have them here to stay. Antibiotics have a value to society and to healthcare systems that far exceeds what traditional pricing and payment models can bring. And this is where the failure of the market can become a success for government interventions. The UK’s National Health Service is offering two contracts to pay pharmaceutical companies at the start of their work for access to innovative antibiotics, incentivizing them to bring new classes of the drugs to patients across the UK for the first time in almost 30 years.

However, the UK cannot tackle AMR alone. With individual governments maintaining the urgency and scale of the challenge of AMR, our international community can be the sum of its parts. The G7 Leaders’ Declaration in 2016 in Ise-Shima committed to mitigating the impact of AMR by considering new incentives to promote R&D on AMR and calling on the international community to take further action. The G20 summit in Osaka last year recommitted to doing similarly with a much wider constituency of countries. We must ensure that there is leadership and accountability and national and global levels, so that we can consolidate our collective gains.

For most antimicrobials, there are few replacements or alternative products in development and even fewer that target priority pathogens. Investment in novel antimicrobials is widely seen as commercially unattractive – the high R&D costs and low returns have led to market failure.

The UK has is pioneering an effort to implement pull incentives to address market failures in antimicrobials. We have started a project sponsored by NICE and NHS England & NHS Improvement that aims to demonstrate the feasibility of innovative models that pay companies for antimicrobials based primarily on a health technology assessment of their value to the NHS as opposed to the volumes used. Through economic modelling and expert opinion, benefits arising from antimicrobials will be measured in Quality Adjusted Life Years (QALY), and include not only direct health gains but also insurance, diversity, transmission, and enablement value.

The project was launched on July 2019, and by the end of 2020, the UK will select two antimicrobials through competitive dialogues. A maximum contract value is £10 million per year per antibiotic for up to 10 years. The UK aims to implement subscription payments by Spring 2022.

The success of the pilot program will be measured by an agreed upon framework for value assessment, a payment framework that leads to successful negotiations, support for antimicrobial stewardship, and the initiation of other test models by other countries.

After the presentations, a Q&A session was held. Questions were raised on topics such as global access, antimicrobial supply chains, public engagement, international efforts, and more.

A participant asked about how to strike a balance between increasing antimicrobial prices and ensuring access. Participants discussed the use of various procurement models, including tier-based pricing for low- and middle- income countries.

A participant asked a question about antimicrobial supply chains, noting that Japan has experienced a shortage of Cefazolin in the recent past. Panelists discussed antimicrobial supply chains, noting that most active pharmaceutical ingredients are only produced in a few countries, such as China and India. It was stressed that there needs to be discussions on whether manufacturing should occur in more countries, and if so, how to maintain safety and environmental standards.

A question was asked about strategies to further engage the public in the issue of antimicrobial resistance. Panelists emphasized the to actively communicate the benefits of advanced investments in antimicrobials to the public. It was noted that a research report by The Wellcome Trust, Reframing Resistance may provide hints on how to better communicate about AMR.

Professor Dame Sally Davies (UK Government Special Envoy on Antimicrobial Resistance)
Dame Sally Davies was appointed by the Prime Minister as the UK Government’s Special Envoy on AMR in 2019. She is also the 40th Master of Trinity College, Cambridge University.
Dame Sally was the Chief Medical Officer for England and Senior Medical Advisor to the UK Government from 2011-2019. She has become a leading figure in global health including serving as a member of the World Health Organization (WHO) Executive Board 2014-2016 and as co-convener of the United Nations Inter-Agency Co-ordination Group (IACG) on Antimicrobial Resistance (AMR) reporting in 2019.
In the 2020 New Year Honours, Dame Sally became the second woman (and the first outside the Royal family) to be appointed Dame Grand Cross of the Order of the Bath (GCB) for services to public health and research, having received her DBE in 2009.

Dr. Louise Norton-Smith (Heads, Global antimicrobial resistance (AMR) strategy team, UK Department of Health and Social Care’s Global Health Security programme, which sits alongside the Fleming Fund and other UK Aid-funded projects addressing diseases of epidemic potential)
She oversees the office of the UK Special Envoy on AMR (Prof. Dame Sally Davies), the UK’s £50m Global AMR Innovation Fund (GAMRIF) and the UK government’s work on AMR health diplomacy and advocacy. She leads the UK’s negotiations on AMR within multilateral fora, including at the G7, G20 and the UN and supports the coordination of the UK Government’s international action on AMR, a key element of the UK National Action Plan.
Louise is a career civil servant and has been at the Department of Health and Social Care for nine years, working on both domestic and international health policies and in ministerial private office. Prior to this, Louise was based in Paris and worked with Internews Europe, an international NGO specialising in media development and access to high-quality information. She has also worked in Sudan and Uganda in humanitarian response and sexual and reproductive health projects. Louise has master’s degrees in social anthropology and geography from the University of Edinburgh, Scotland and in international development from the University of Paris (Panthéon-Sorbonne), France where she was an Entente Cordiale scholar.

Professor  Colm Leonard (Consultant Clinical Adviser/Consultant Thoracic Physician/Honorary Professor of Respiratory Medicine, National Institute of Health and Care Excellence UK & Manchester University NHS Foundation Trust)
Following undergraduate training in Dublin, and post-graduate experience in Dublin, London and Stanford University in California, Professor Leonard was appointed as a Consultant Thoracic Physician in Manchester in October 2000, and is also an Honorary Professor of Respiratory Medicine at Manchester Academic Health Sciences Centre.
Since 2008 Prof Leonard has also been working as Consultant Clinical Adviser for the Centre for Health Technology Evaluation at NICE which involves assessing which novel pharmaceutical and MedTech products will benefit from a NICE assessment.
A significant amount of Prof Leonard’s time over the past 4 years has been spent with colleagues in NICE, Department of Health and Social Care, and NHS England & Improvement working as clinical lead for the UK project to develop a novel value assessment & reimbursement mechanism for new antimicrobials. Prof Leonard still spends 50% of his time as a pulmonologist specialising in severe lung disease, particularly Sarcoidosis and other interstitial lung problems.

Dr. Nick Crabb (Programme Director – Scientific Affairs, National Institute for Health and Care Excellence (NICE))
Nick had a 20 year career in analytical science, process technology and general management in the chemical, pharmaceutical and contract laboratory industries prior to joining NICE in 2010 as the associate director responsible for establishing and managing the Diagnostics Assessment Programme. In 2014 Nick was appointed to his current role where he oversees NICE Scientific Advice, the Science Policy and Research programme and NICE’s input to the European Network for Health Technology Assessment (EUnetHTA). Nick has broad scientific and policy interests relating to the evaluation of technologies and interventions to support the development of clinical, public health and social care guidance. His experience includes consideration of HTA issues arising from the availability of novel new products such as cell and gene therapies and work on methods issues relating to the evaluation of antimicrobials. Nick was also the co-chair of the evaluation and commissioning subgroup of the UK regenerative medicine expert group and led NICE’s contribution to a project on the assessment and appraisal of regenerative medicines that reported in 2016.

[Event Report] The 88th HGPI Seminar: Dr. Masaki Sonoda – Considering How to Structure Healthcare in Terms of How It Will Affect Children in the Future (October 9, 2020) >

[Event Report] The 88th HGPI Seminar: Dr. Naoya Hashimoto – Considering How to Structure Healthcare in Terms of How It Will Affect Children in the Future (October 9, 2020) >