[Event Report] The 86th HGPI Seminar – What Is Needed to Rebalance Innovation and Sustainability in the Healthcare System? A New Philosophy and Policy Options for Rebuilding the Japanese Economy (June 17, 2020) 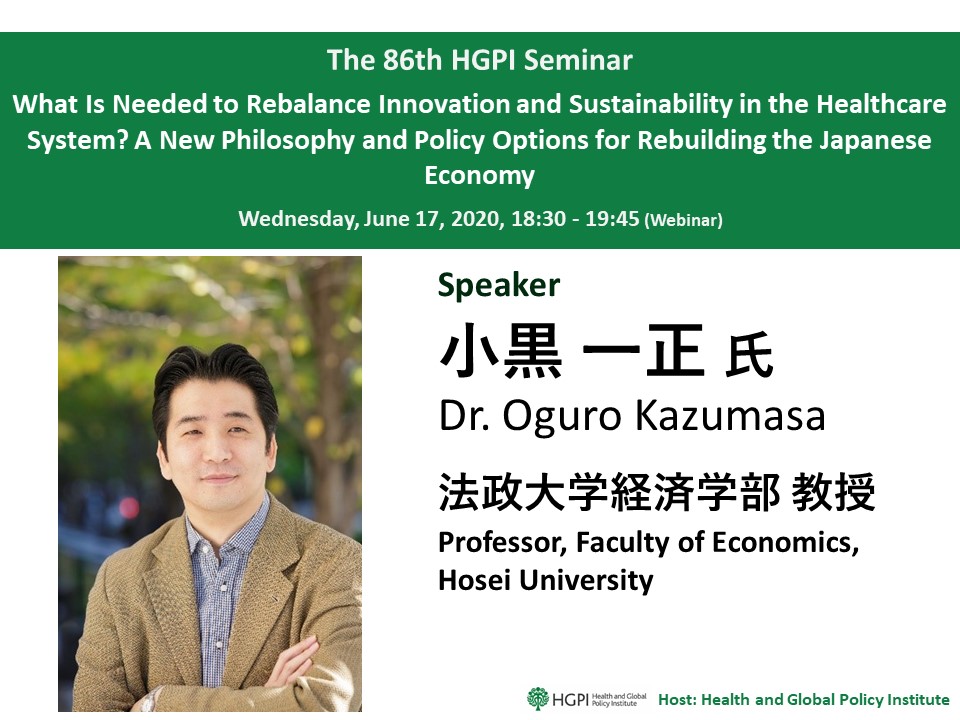 For this HGPI Seminar, we hosted Professor Kazumasa Oguro from Hosei University. In a lecture entitled, “What Is Needed to Rebalance Innovation and Sustainability in the Healthcare System? A New Philosophy and Policy Options for Rebuilding the Japanese Economy,” Professor Oguro discussed the necessary reform philosophy and the next steps to take to address the current situation surrounding financial resources in Japan’s healthcare system.

■ The sustainability of the healthcare system from the perspective of public finance
The uncertainty caused by the novel coronavirus (COVID-19) pandemic which has recently engulfed the world has affected society in various ways. To ensure the stable provision of healthcare during such circumstances, it is important to improve the sustainability of financial resources for healthcare.
In the budget for FY2019, expenses related to social security benefits accounted for 34.2% of Japan’s total expenditures. Compared to the initial budget for FY1990, such expenses accounted for 17.5%, meaning there was an increase of 16.7%. We can conclude that social security expenditures have been a driving force for the expansion of outstanding Government debt. This was partially caused by sluggish growth rates in income from social security premiums that started around 1997. The growth of social security benefit-related expenses has outpaced the growth of income from insurance payments. In the FY2013 budget, approximately 60% of social security benefits were covered by health insurance payments, so the widening gap between the two is a serious issue facing healthcare system sustainability.
An international comparison of social security expenditures and national burden ratios among member-economies of the Organisation for Economic Co-operation and Development (OECD) showed that there was balance between benefits and burdens in Japan in 1990. However, expenditure growth outpaced GDP growth, and benefit expenditures were greater by 2015. If this trend continues, there is a risk that social security spending could expand even further in 2060.
Social security benefits include pensions, healthcare, long-term care, public assistance, and child-rearing support. Because financial resources for these services are generated through insurance premiums and tax collection, they increase according to GDP growth. Therefore, it is important to grasp the ratio of social security spending to GDP, which has been trending slightly upwards since 2010. Meanwhile, the outlook for social security expenses (in economics, the baseline case) shows that the ratio of GDP to healthcare expenses, which was 7% in FY2018, is projected to increase by a maximum of approximately 2% by FY2040. While the ratio of social security spending to GDP has been controlled to a certain degree for pensions and child-rearing support, the ratio for healthcare is projected to continue increasing and requires further reforms.
Meanwhile, the consumption tax rate was increased to 10% in FY2019. Among the funds generated, 1.2 trillion yen was used to supplement the FY2020 social security budget. In addition to the increase in tax revenue, the social security budget for FY2020 is 1.7 trillion yen greater than the previous fiscal year. That figure includes approximately 400 billion yen from natural increases caused by population aging. The added funding was used to improve social security in the fields of child-rearing and long-term medical care. However, comparing primary balances (PB) in initial fiscal budgets shows that the budget deficit will be about 50 billion yen greater in FY2020 than in FY2019. Although social security has been buoyed by a tax hike, it cannot be said for certain that doing so improved the problems facing public finances. Reforms that go beyond increasing the consumption tax rate are necessary.

Revisions to public health insurance benefit coverage that encourage people to share greater risks as a community and shoulder smaller risks as individuals should be considered. When deciding which treatments will have lower coverage rates or increased copayment rates, it is important to look at the per capita standardized annual cost of each treatment to determine which adjustments will have a low impact on household finances. At the same time, it is important to select treatments with large market sizes (calculated by multiplying price P per unit and quantity Q sold to determine total revenue, or P×Q). For example, the standardized annual per capita costs for treatments like pain relief patches and stomach medicines are relatively low. Increasing copayment rates for these treatments will carry a low risk of causing households to go bankrupt. However, because their quantity sold Q is large, their market size (P×Q) is also large, so increasing their copayment rates or lowering their coverage rates will have significant effects on controlling overall expenditures for social security benefits.
Also, health insurance’s ability to distribute risk and the ability of taxes to redistribute wealth should be considered separately, on their own terms. When doing so, it is also necessary to establish systems that can concentrate public financial resources on the people who need them most. One way such systems could distribute public financial resources in a way that prioritizes people with low incomes would be to adjust their copayment rates by their household income as reported in their tax return under the My Number system.
Finally, I anticipate the introduction of an automatic slide mechanism like the one used for public pensions, which would automatically adjust expenditures according to GDP ratio, as well as nonpolitical discussion of the healthcare budget. While the overall revision rate during medical service fee reform is still strongly affected by politics, it is important for us to discuss a mechanism to apply an automatic adjustment to the overall reform rate while also addressing the topic of financial resource distribution for healthcare expenditures. We can expect a natural increase in said expenditures due to population aging in the future, so I believe such a mechanism should be introduced to the Medical Care System for the Advanced Elderly, which receives high contributions from public financial resources. This is not intended to reduce healthcare expenditures, but to stabilize them as a percentage of GDP by slowing their growth and the growth of medical service fees. However, because introducing such a mechanism would mean defining budget brackets, it would be possible to shift portions of the budget if there was a surplus in any bracket. Doing so might make it possible to set aside funding to handle such emergencies, such as the change in healthcare demand created by the growing COVID-19 pandemic.

■ Steps that will be necessary for promoting reform in the future
In addition to the steps discussed above, we must define a special category of pharmaceuticals that are exempt from drug price reductions and implement reforms (including steps to integrate with reforms for big data use in finance) that proactively promote technological innovation, particularly Artificial Intelligence (AI), Information and Communications Technology (ICT), and big data. Doing so will contribute to balancing the sustainability of health insurance finances and improvements to industrial competitiveness.
For medium- to long-term reforms like those, we must first clearly state the ideology and direction of systemization efforts like the Social Security System Council did when it presented the “Recommendations on Social Security Systems” in 1950. To build a healthcare system that can handle a declining birthrate, population aging, and innovative health technology, we must consider a modern Reiwa-era version of that document that indicates a modern ideology and direction. To accomplish that, a discussion body that includes the related Ministers and other experts should be formed. Together, they should create a reform vision that takes the reform philosophies for social security described above into account.

■Profile
Dr. Kazumasa Oguro
Professor Kazumasa Oguro belongs to the Hosei University Faculty of Economics. He was born in 1974 and graduated from the Faculty of Science at Kyoto University. He then attended the Graduate School of Economics at Hitotsubashi University, where he earned his Doctorate of Economics. After joining the Ministry of the Treasury (current the Ministry of Finance) in 1997, he served as Assistant Legal Examiner at the Minister’s Secretariat Documentation Division; Deputy Director-General of the Monitoring Division at the Bureau of Customs; Senior Researcher at the Ministry of Finance Policy Research Institute; and Associate Professor at Hitotsubashi University’s Institute of Economic Research. He assumed his current position in April 2015. His other roles include Senior Visiting Fellow at the Ministry of Finance Policy Research Institute; Consulting Fellow at the Research Institute of Economy, Trade, and Industry (RIETI); Counselor to the Ministry of Health, Labour and Welfare for The Japan Vision: Health Care 2035; Member of the Cabinet Secretariat’s Innovative Business Activity Evaluation Committee; Special Investigator of the Board of Audit of Japan; Executive Director at the Kajima Institute of International Peace; Director at the Institute for New Era Strategy (INES); and Senior Researcher at the Canon Institute for Global Studies. He specializes in public economics.

< [Event Report] The 87th HGPI Seminar: Healthcare Policy after COVID-19 and the History of the Relationship between the Central Government and Regional Governments (August 7, 2020)

[Event report] The 85th HGPI Seminar –The Characteristics and Current Situation of Decision-Making in Healthcare (May 22, 2020) >