[Event Report] The 87th HGPI Seminar: Healthcare Policy after COVID-19 and the History of the Relationship between the Central Government and Regional Governments (August 7, 2020) 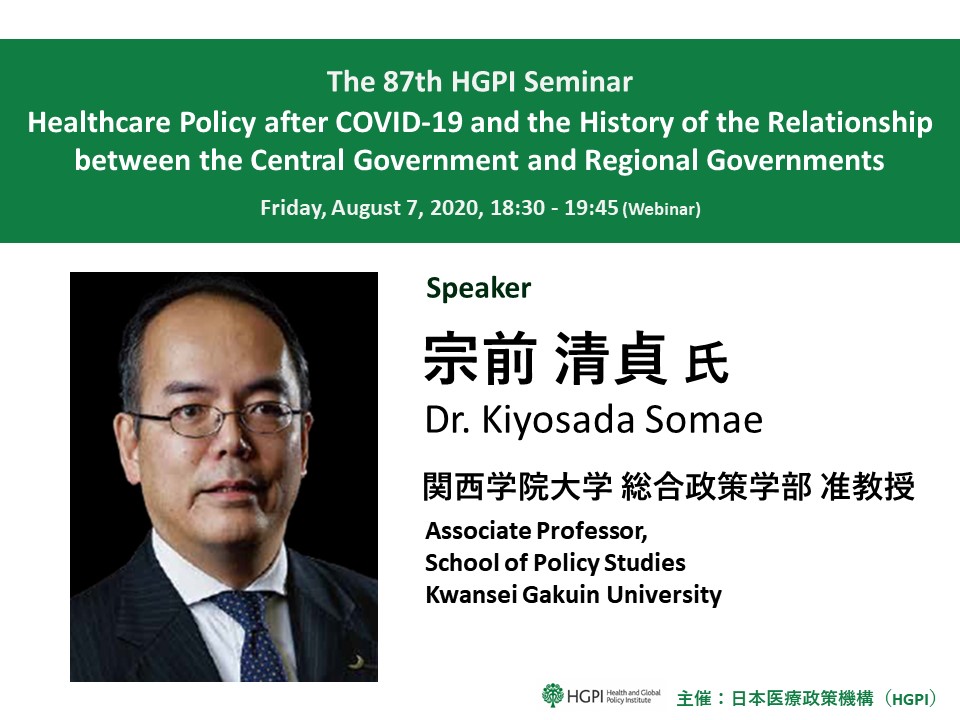 For this HGPI Seminar, we hosted Dr. Kiyosada Somae, a political scientist whose research focuses on Japan’s healthcare system and policies from the perspectives of public policy and local government.  Dr. Somae talked about the importance of viewing healthcare from the perspective of political science and policy studies, share viewpoints on those topics, and address the topic of public healthcare administration in local governments.
COVID-19 (coronavirus disease 2019) has been getting a bigger issue in Japan. In consideration of the safety of the speaker, participants, and our staff,  we held this seminar online.

■Healthcare’s position within political science
While Professor Kiyosada’s starting point as a researcher was in the field of local governance, looking at each of the various policies implemented at the municipal level caused his interest to shift towards public policy as a whole. He realized he needed to deepen his understanding of each individual field within public policy and his current research focuses on healthcare systems and healthcare policy.
Political science is a field that mainly focuses on the conflicts that arise around profits and value and the processes for responding to those conflicts. General topics of analysis include the relationships of authority that result in adjustments made in response to those conflicts or the methods and systems used to make those adjustments. The main focus of analyses conducted on relationships of authority is to examine the process of negotiations on distribution and use that result in stable provision of a resource. In the past, when conducting such analyses in the field of healthcare as a topic within political science, people tended to focus on the processes through which policies or social security systems were created while the topic of healthcare itself went ignored.

As a field of political science, the study of local governance is appropriate for examining independent variables when there are many samples of policy from within the same country. However, within local governance studies in Japan, there is a tendency to focus too much on innovative cases with the assumption that policies can be divided into those enacted before World War II and those enacted after World War II. As a result, healthcare policy could not be called a prominent subject of study within the field of local governance in Japan.

Inter-governmental relations (IGR) is an important topic within the study of local governance. In Japan, there have been many examples in which policy was promoted in an integrated manner involving the national, regional, and municipal levels. IGR is a concept based in international political theory in which each of those bodies are perceived as independent governments rather than in terms of the hierarchical relationships between them. When viewing healthcare policy from the perspective of political science, it is important to consider it in terms of historical institutionalism because in a domain like healthcare, where systems were established over long periods of time, there is a tendency for path dependency. In other words, in healthcare, certain future policy options will be easier to enact according to past policy decisions. In some cases, this makes it difficult to implement best practices from abroad with pinpoint precision. Of course, there are issues with this line of thinking. In modern capitalist countries, healthcare has historically been considered a feature of welfare states. Although healthcare and welfare share many similarities, it is possible to consider healthcare independently from welfare, which has a longer history.

■How should we perceive the healthcare system in Japan?
Professor Kiyosada’s research examines healthcare with the following four perspectives:

For the most part, the healthcare system in Japan has been rated highly and is recognized as a well-balanced system. When considering the four perspectives above, various questions come to mind. Why is care in Japan high-quality and affordable? Why was Japan able to catch up to advanced nations when it was previously a least developed country? Why has Japan’s progress in social welfare been slower than in healthcare? Why was Japan able to establish and maintain universal health coverage? One likely reason that care in Japan is high-quality and affordable is because local governments in Japan possess the authority to administer affairs related to healthcare and the national health insurance system. In addition, public health insurance in Japan operates as a quasi-single payer system under the medical service fee schedule system, which helps keep costs down. Examining factors that allowed Japan to catch up to advanced nations when it was originally a least developed country, we find that major advances in medicine were taking place around the same time that Japan abandoned its isolationist foreign policy, allowing medicine in Japan to make a sudden leap forward. The spread of the medical regulation system called “Isei” starting in 1874 was another step forward for the development of Western medicine in Japan. It is likely that progress in social welfare has been slower than in healthcare because there was less demand for social welfare compared to healthcare in the period before World War II. Social welfare in Japan developed along a different route than normal with the purpose of addressing issues different from the ones social welfare is meant to address. In particular, the Supreme Commander for the Allied Powers (SCAP) issued three principles of public welfare to prevent the development of slums in urban areas and to provide support to people who had fallen into harsh everyday living conditions due to disabilities or injuries from the war. The answer to the question “Why was Japan able to establish and maintain universal health coverage?” is provided if we examine the situations in society before and after World War II. Rapid inflation after the war caused the collapse of the middle class, which had previously provided the customer base for medical examinations covered by out-of-pocket payments. Physicians had to secure a source of income, so they started to provide fixed rate medical treatments covered by health insurance. These developments were encouraged by a surplus of physicians after the war due to prewar efforts to increase their ranks.

Policy resources possessed by the Government include its authority over law, provision, and incentives, which it exercises through all varieties of regulations. Government involvement in healthcare mostly takes place through measures related to provision and economics. To control provision, Government involvement mainly takes the form of setting requirements for medical education and certifications and by exercising its authority over the establishment of hospitals. On the economics side, the Government can control the health insurance system through the medical service fee schedule. In addition to its involvement in provision and economics, Government involvement in healthcare also includes research and development and the formulation of all varieties of plans. If we view the healthcare system that was built after World War II from the perspective of political analysis with a particular focus on the process of authority negotiations, we are given the impression that a strong emphasis has been placed on pharmacoeconomics centered on the medical service fee system. However, taking a historical viewpoint of its role in medicine, it is apparent that the Government has played a significant role in ensuring public health. In particular, the expansion of authority for local governments in the 1930s accelerated the improvement of public health as they trained public health nurses or established public health centers as adoption of healthcare unions and the national health insurance system grew more widespread. It is in these areas that the role of local government has been highlighted by the ongoing COVID-19 pandemic, and it is likely that this authority was one of the factors that allowed Japan to control the spread of COVID-19 more successfully than other countries.

■The outlook for healthcare policy after COVID-19
The COVID-19 pandemic has brought various issues to light related to how expert knowledge is utilized within the policy decision process, and specifically on the balancing of expert advice and politics and the handling of expert knowledge from multiple fields. While there are many issues directly related to infectious disease control within the current circumstances facing society, society is being pressed by even more far-reaching issues that are not related to medicine, such as those related to international politics and economics. In the future, it will not be possible to lead all of society with expertise from a single field. Leadership will require meta-expertise that cuts across various fields of expertise, but whether or not Japan and international society can recognize that is unknown.

While it is difficult to accurately predict developments in healthcare policy after COVID-19, Professor Kiyosada believes there will be no significant changes. In particular, the current institutional systems in Japan which form the framework that controls healthcare systems (the public health insurance system, the medical service fee schedule system, and various Government institutions, such as the Ministry of Health, Labour and Welfare or public health centers) are unlikely to change after COVID-19. The reason that drastic changes to healthcare policy as a whole are highly unlikely is because future policy options will be formulated with the current institutional systems in mind. Historically speaking, one major factor for this is the fact that public health ideology has expanded to and permeated every corner of Japanese society. Other factors that are likely to limit the degree to which healthcare policy changes in the future are that thorough health education is being provided in schools and that Japan has established a network of public health centers.

■Profile
Dr. Kiyosada Somae (Associate Professor, Kwansei Gakuin University)
Professor Somae is an Associate Professor belonging to the School of Policy Studies at Kwansei Gakuin University. He was born in Saitama Prefecture in 1964. He is a graduate of the Tohoku University School of Law. He withdrew from the doctoral course at the Tohoku University Graduate School of Law and later earned a doctoral degree in law in 2020. He has served as Associate Professor at the Faculty of Law and Letters at the University of the Ryukyus and as Professor at Osaka University of Pharmaceutical Sciences. He assumed his current position in April 2016. He specializes in policy process theory, research on healthcare systems, and local governance. His major works include A Modern History of Japanese Healthcare (Minerva Shobo), Healthcare Administration in Local Government (in Policy and Region, edited by Jiao Congimian and Seichiro Fujii for Minerva Shobo), and The Form and Function of Expertise in Healthcare Policy (in Expertise and Politics, edited by Ikuo Kume for Waseda University Press).

< [Event Report] The 88th HGPI Seminar: Dr. Masaki Sonoda – Considering How to Structure Healthcare in Terms of How It Will Affect Children in the Future (October 9, 2020)

< [Event Report] The 88th HGPI Seminar: Dr. Naoya Hashimoto – Considering How to Structure Healthcare in Terms of How It Will Affect Children in the Future (October 9, 2020)

[Event Report] The 86th HGPI Seminar – What Is Needed to Rebalance Innovation and Sustainability in the Healthcare System? A New Philosophy and Policy Options for Rebuilding the Japanese Economy (June 17, 2020)>