[Press Release] The Public Opinion Survey on Child-rearing in Modern Japan: Aiming to Build a Society in Which People Who Want to Get Pregnant Can Do So (Preliminary Report) (December 20, 2021) 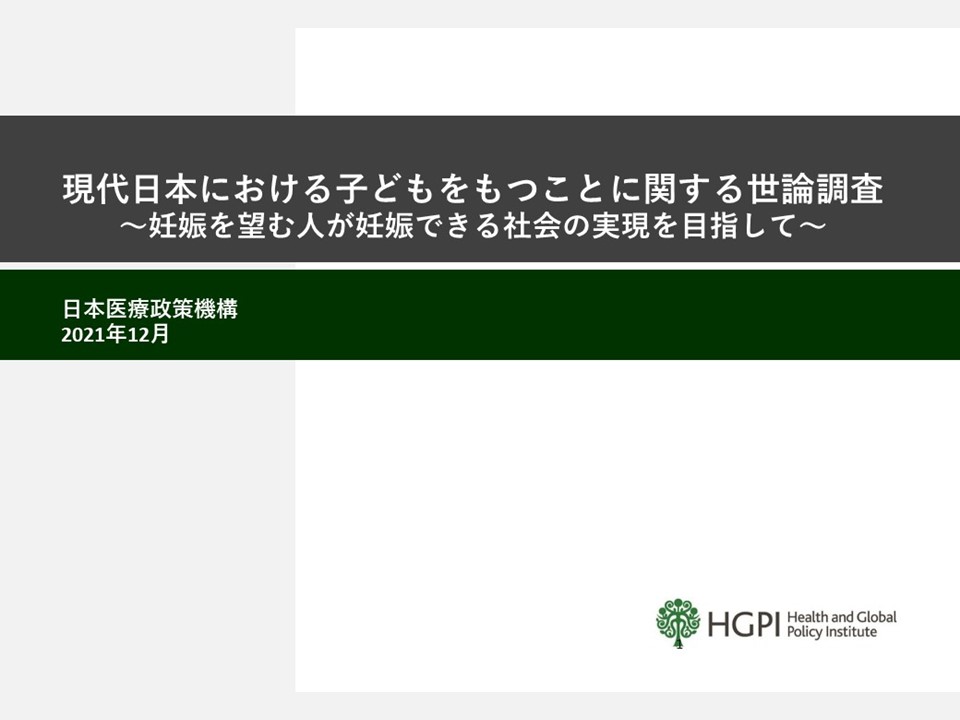 The Health and Global Policy Institute (HGPI) Women’s Health Project conducted a nationwide online public opinion survey of 10,000 men and women ages 25 to 49 to examine factors related to pregnancy among people who wish to conceive. Today, we would like to present a preliminary report for this survey, which is titled “Aiming to Build a Society in Which People Who Want to Get Pregnant Can Do So.”

The Government of Japan has implemented various laws and measures to reverse the declining birthrate and achieve a target of 1.8 births per woman. These have included reviewing the child-rearing allowance and taking steps to eliminate daycare waiting lists, improving working conditions for young people, and providing parental leave to men. However, according to statistics presented in June 2021, the total fertility rate in 2020 was 1.34, making it the fifth consecutive year of decline. In response, subsidies for fertility treatments were newly expanded and discussions on expanding insurance coverage for fertility treatments are now underway. Many people feel these support measures are insufficient for meeting the needs and realities facing members of the child-rearing generation. The purpose of this survey was to identify and propose specific, necessary, and effective measures for achieving a society which enables everybody who wants to get pregnant to be able to do so.

Key findings of the public opinion survey are summarized below.

Key findings of the survey

*For an explanation of the survey’s key findings, please download the “Public Opinion Survey on Child-rearing in Modern Japan (Preliminary Report)” PDF provided below. Please note that the preliminary report is available in Japanese only.

A full report on the survey is scheduled for release at a later date.