[HGPI Policy Column] No. 24 – From the Dementia Policy Team – Steps for Building a Society with Stories That Resonate in the Heart 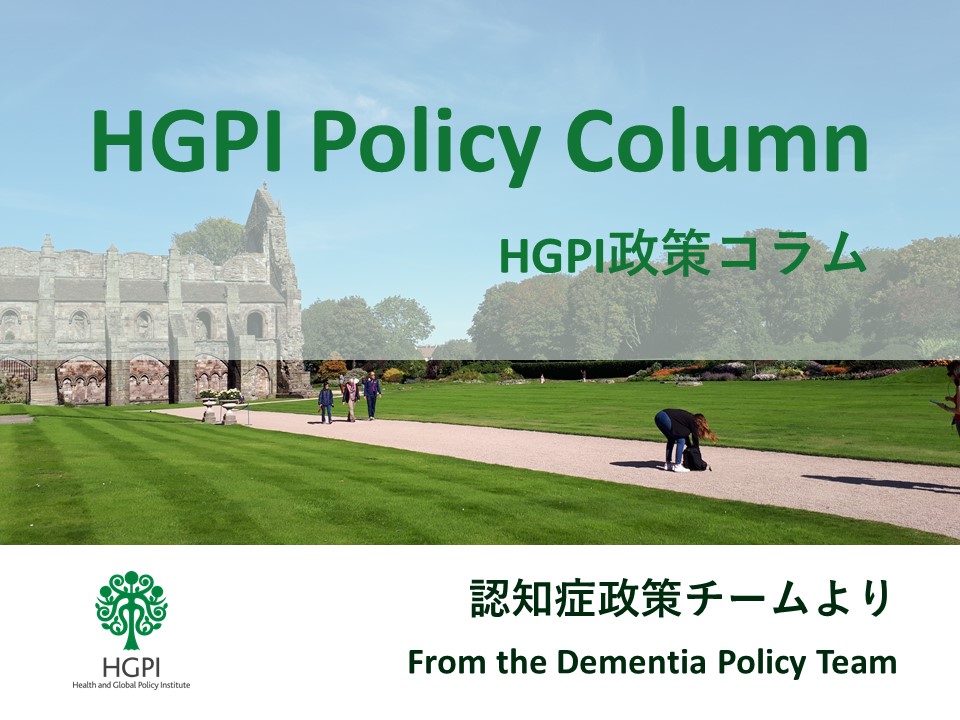 The experiences and opinions of people with dementia can serve to trigger changes in our behaviors and attitudes.

Progress in awareness-building initiatives such as the Dementia Supporter Training Program has improved understanding toward dementia, so now is the time for us to build a next version of our society based on the narratives of people with dementia.

Gathering individuals’ experiences and opinions and arranging them into universal, objective information is likely to help us advance to a new stage in the effort to build a more dementia-inclusive society.

On a weekend in early August, 2021, I had the opportunity to participate in a symposium hosted by a certain advocacy organization for people with mental disorders. In addition to the Health and Global Policy Institute (HGPI) Dementia Policy Project, I also serve as manager of HGPI’s Mental Health Policy Project. (Although many organizations address these two topics together, at HGPI, dementia has a separate project from other topics in mental health. The Mental Health Policy Project began in FY2019.) HGPI’s mission is to achieve “citizen-centered, evidence-based healthcare policy,” and in each project, we maintain close communications with the people most affected by each issue and with the advocacy organizations representing them. We also try to participate in symposiums and other such events hosted by advocacy organizations whenever possible. Since the start of the Coronavirus Disease 2019 (COVID-19) pandemic, many of these symposiums and meetings were made remote, including those hosted by HGPI. Therefore, it had truly been a long time since I had participated in an event in person.

At the symposium, lectures, panel discussions, and other discussions were held on the topic of long-term hospitalizations. This has been a central topic in the field of psychiatric medicine in Japan for many years. People with mental disorders told stories about their experiences and shared their thoughts and opinions on policy reform. I was particularly impressed by a play about life in a psychiatric hospital that had been written by a working psychiatrist. I think many people have not been able to see it yet and I have not received special permission to share details, so I will refrain from sharing too many details here. It was set in a private psychiatric hospital and depicted the relationships and conflicts among people undergoing long-term hospitalizations, physicians, and other healthcare professionals. It also portrayed the issues in society that led to these conflicts. Its overall message (at least, in my interpretation) was “the importance of sweeping away the roles in which society places us, of understanding our own thoughts and feelings, and of speaking up to share those thoughts ourselves.” This was by no means only meant for the patients; to me, it also seemed to tell physicians that they must not be trapped in their roles and speak out about their own thoughts. The phrase “take back your name” appeared many times throughout the play. I feel that these words were an attempt to raise the alarm that we must not allow ourselves to lose the ability to express our true thoughts that can be filtered out by our positions. It was the first time in a while that I had attended an event in person, and along with gasps of the audience and the tension in the air, I strongly felt the importance of people expressing their experiences and thoughts in their own words, of accepting those words, and of the ability of storytelling to touch people’s hearts.

How should we respond to the narratives of people with dementia?

In addition, one of the five pillars of the National Framework for Promotion of Dementia Policies, formulated by the Government in 2019, is to “Promote public awareness and support efforts made by people with dementia to disseminate their stories and opinions.” Specific measures within this pillar include the appointment of dementia ambassadors (also called “Ambassadors of Hope”) and Caravan Mate Ambassadors; the creation of the “Guide for Living a Better Life with Dementia from a Firsthand Perspective,” which contains advice on living with dementia after diagnosis; and holding meetings for people with dementia in each region.

However, as the voices of people with dementia grow more prominent, we must not only accept their experiences and opinions but also consider the position of their voices in society. Cultural anthropologist Junko Kitanaka has pointed out that as people’s narratives and movements gain momentum and political significance, they face the issue of determining which parties are the most “legitimate” ones that those narratives and movements represent.1 People who represent the parties most affected by an issue then “face a conflict in which they must step beyond the uniqueness of their own experiences to serve as representatives, even though those experiences form the basis of their authority,.”2

Based on these points, I think we should recognize the narratives of people with dementia that we encounter at various symposiums or in books as their experiences and opinions, and that we should not unilaterally treat those narratives as universal or representative. Deriving universal principles from the experiences and opinions of people with dementia is not the goal. Rather, the goal is to allow their sincere narratives to resonate in hearts and minds, where they will serve as triggers for each individual to take action and change their attitudes toward dementia.

From narratives to collective wisdom

As previously mentioned, the National Framework for Promotion of Dementia Policies aims to implement measures to deepen understanding toward dementia throughout society by “Promoting public awareness and supporting efforts made by people with dementia to disseminate their stories and opinions.” One such measure is the Dementia Supporter Training Program. Through that program, which began in 2005, more than 12 million people have been trained as dementia supporters. Its instructors, called Caravan Mates, are people with certain expertise or roles and who have completed an instructor training course. In addition to serving as program instructors, Caravan Mates also serve as leaders in joint efforts with local governments to promote understanding toward dementia in communities. In recent years, there has been growing momentum for efforts to train dementia supporters in the corporate and professional sectors. When the National Framework for Promotion of Dementia Policies was presented in 2019, it included a training target of 4 million dementia supporters at companies and workplaces. The Dementia Supporter Training Program has received international attention, as well. For example, a version of it called Dementia Friends was started in the United Kingdom in 2012.

In April 2021, HGPI held a symposium titled “Considering the Best Dissemination and Awareness-Building Measures for Building a Dementia-Inclusive Society.” Based on that symposium, we have presented the following policy recommendations in “The Next Fifteen Years in Raising Awareness for Dementia.” (Click here for details.)

As the number of narratives from people with dementia increases, I hope they will be heard as individual stories as well as perceived as widely relevant, objective information that can be used as the basis to formulate national and local Government policies or to create products and services including those from private companies. As Kitanaka points out, we must “not only position narratives as individual and subjective stories, but also attempt to transform them into scientific evidence through collection and comparison.”3

This is being reflected in efforts at the Ministry of Economy, Trade and Industry (METI), particularly by the Dementia Public-Private Council’s Dementia Innovation Working Group, where efforts for participation from people with dementia in the development of products and services are advancing. We look forward to further progress in this area moving forward. I also think the Dementia Supporter Training Program is an excellent initiative because it can be used to provide standardized information nationwide with a shared curriculum and textbook and supervision from specialists. There have been recent advances in understanding of dementia, so if that program can be reinforced with evidence generated from narratives of people with dementia, it will evolve and become even more effective.

< HGPI Policy Column (No.25) -from the Child Health Team-

HGPI Policy Column (No.23) -from the Child Health Team- >