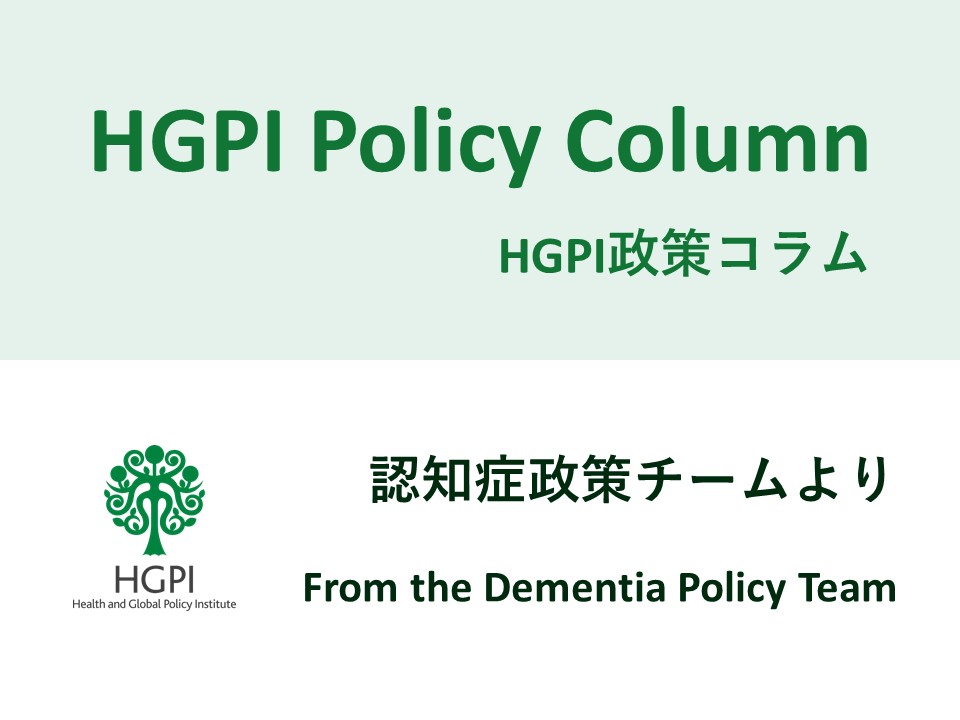 ・When revising a law related to the novel coronavirus, attention focused on potential restrictions to private rights.

・The role of the Diet is to create laws and to check the administrative management of the government.

・As members of civil society, we must express our will through the creation of laws at the Diet, where our representatives are gathered.

On Discussions for a State of Emergency Declaration

The theme of our two most recent columns was the Basic Law for Dementia. In a section entitled “What Are Basic Acts?” in our last column, we introduced the positioning of basic acts in the administration of Japan as well as the history of and trends in their creation. I also shared my thoughts on the importance of basic acts as a starting point. In light of recent social conditions, this column will review the importance of the public creation of laws and using the Diet to check government administration.

Right now, we are living with anxiety over Coronavirus Disease 2019 (COVID-19). As I write this column in early April 2020, the number of infected individuals in Japan has begun to increase rapidly – particularly in Tokyo – and many people are beginning to feel disturbances in their everyday lives. Many people are closely following the government’s response and discussions being held among experts, and there are various announcements being made by the mass media.

The Diet passed a revision applying the Act on Special Measures for Pandemic Influenza and New Infectious Diseases Preparedness and Response (hereinafter the “Act on Special Measures”) to COVID-19 on March 13, 2020.*1 Discussions have focused on the declaration of a state of emergency among those special measures. Article 32 of the previous Act on Special Measures allowed for such declarations to be made for “Situations that meet requirements specified by Cabinet Orders that have or may have significant impacts on the daily lives of the people and on the national economy due to rapid, nationwide spread of disease.” This Article allows the head of the government response headquarters (according to the recent legal revision, the leader of the Novel Coronavirus Response Headquarters established on March 26, 2020, which is the Prime Minister) to declare a state of emergency.

In practice, declaring a state of emergency would grant the government powers related to the sale of medical or food products and the use of land. The government would be able to grant governors of the affected areas the authority to request manufacturers, retailers, and shipping companies handling medical or food products to sell said products. Those governors would also gain the authority to make compulsory acquisitions if said requests were ignored without justifiable reasons. They would also gain the authority to use land or buildings without consent to set up emergency healthcare facilities or to issue penalties when use is not granted. However, the main reason to declare a state of emergency would be to maintain and ensure the healthcare system, and such a declaration could go no further than to request members of the public to restrict their private lives by staying in or avoiding social events. In countries like the U.S., France, and Spain, people are being prohibited from going out or from traveling, and business operations are being restricted. Most people view a declaration of a state of emergency in Japan as having weaker legal force than the restrictions enacted in such countries. *2*3

When revising the Act on Special Measures, the Diet included various supplementary resolutions, such as requiring the government to give advance notice to the Diet in the event a state of emergency will be declared, or to minimize restrictions placed on private rights.*4 Some may question if such discussions were really necessary at a time like this, or may think that the government should impose restrictions on movement as soon as possible, even without a legal basis for doing so. However, I believe that this series of discussions was part of an extremely important process. According to the Constitution, the Diet has very important roles in enacting and revising laws, checking the actions of government through discussions held at the Diet, and conducting follow-up examinations in relation to government. *5

(As of April 6, 2020, the time of writing, it has been reported that a state of emergency may be declared. The information contained in this column applies to the situation as it currently stands.)

Law as an Expression of Will

As some readers will recall from past school lessons, a theory called the Social Contract Theory was created by philosophers Hobbes, Locke, and Rousseau in the 17th century. The Social Contract Theory states that nations or governments are created by people entrusting those entities with the natural rights people receive at birth. Among those natural rights, Locke placed particular emphasis on the inalienable right to private property. To uphold the natural rights of the people, Locke believed that it is reasonable to create governments by certain sets of rules and for governments to protect the rights to private property and ownership possessed by each individual. Therefore, the people living in a nation or under a government must continuously check if that government is fulfilling its duties in protecting their rights to private property and ownership. In Japan, the people do not directly elect the head of the government, the Prime Minister. Therefore, it is first necessary for us to exercise our right to vote and elect Diet members. Then, those Diet members must create necessary laws and continuously work to check if the government is being administered in a proper manner.

When we are faced with a problem, we expect the government to take leadership. While it might be an extreme way to express it, there is a part of us that expects a superhero to suddenly appear and solve everything. However, in real life, no matter which superhero appears, their actions must have a legal basis. That is why we, as citizens, must think about policy and voice our opinions without just relying on the government to solve social issues. We are supposed to realize our thoughts and opinions by expressing them through our representatives in the Diet so they can check the government or government administration. The policy issue of dementia is no different. Although various measures have been advanced since the government presented the Framework for Promoting Dementia Care in June 2019, the Framework is nothing more than guidelines for how the government thinks and how the government will move forward. We must focus our efforts to ensure that the Basic Law for Dementia (the discussions for which are currently at a standstill) is enacted quickly to advance the dementia policy deemed necessary by civil society, especially those most affected, and in doing so to express our will to the government through the creation of laws.

Right now, each one of us has been forced into an unfamiliar routine. I, too, am writing this column from home according to a work-from-home order issued in response to the government’s request for people to stay in. The current situation may be causing people with dementia and their family members to experience many uncertainties. There have been reports that not only healthcare providers but also people providing long-term care and welfare services supporting people with dementia and their families are continuing to meticulously provide their services. It goes without saying that many other people are living with uncertainty, including people with various other diseases or disabilities, their families, and people with children. I think it is safe to say that there is nobody who does not feel some degree of uncertainty right now. Although we are kicking off the new fiscal year with complicated feelings, as someone involved in healthcare policy, I am grateful to the healthcare providers and everyone in academia and the government who are doing their best at the front lines, and I hope that the situation can come to an end as soon as possible.

*3 According to the Act on Special Measures for Pandemic Influenza and New Infectious Diseases Preparedness and Response, prefectural governors gain the authority to seal off buildings or block off or restrict access to roads.

*5 Article 41 of the Constitution of Japan reads, “The Diet shall be the highest organ of state power, and shall be the sole law-making organ of the State.” Article 62 reads, “Each House may conduct investigations in relation to government, and may demand the presence and testimony of witnesses, and the production of records.”