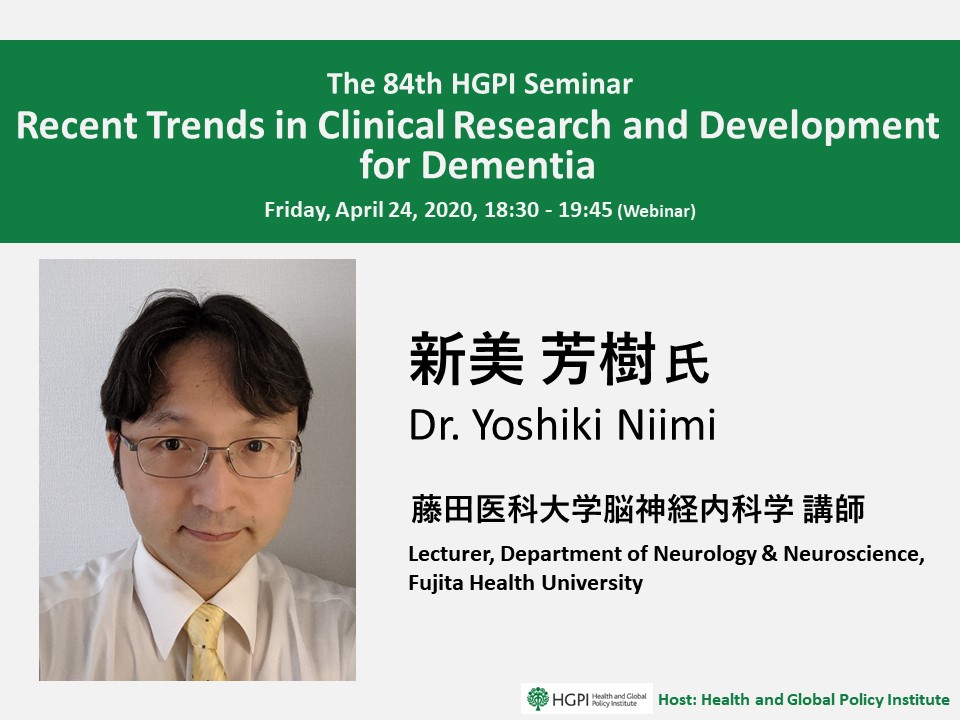 The 84th HGPI Seminar featured Dr. Yoshiki Niimi (Lecturer, Department of Neurology & Neuroscience, Fujita Health University). Based on his vast experience and knowledge in clinical research and from his time at the frontline of policymaking as an expert consultant on dementia measures at the Ministry of Health, Labour and Welfare (MHLW), Dr. Niimi talked about medical science-based clinical research and development for dementia while sharing the latest research data and best practices from Japan and abroad. We held a question-and-answer session and deepened our understanding on this topic with everyone in attendance.

■ Basic information concerning dementia
Dementia has received significant amounts of international attention. According to the World Health Organization (WHO), somewhere in the world, someone develops dementia every three seconds. The number of people living with dementia is estimated be 50 million worldwide and their number is projected to triple by 2050.
The four most common types of dementia are Alzheimer’s disease (AD), vascular dementia, Lewy body dementia, and frontotemporal dementia. In recent years, we have come to view various types of dementia such as Alzheimer’s disease and vascular dementia as having highly overlapping conditions, partly because they share many risk factors.

■ The current situation surrounding new pharmaceuticals and future expectations
In the field of dementia treatment, expectations are particularly high for pharmacotherapy for AD and vascular dementia. It is recognized that the approved pharmaceuticals currently on the market have a certain degree of effect at preventing cognitive decline and controlling Behavioral and Psychological Symptoms of Dementia (BPSD). Physicians specializing in dementia consider existing pharmaceutical treatments for AD relatively effective in terms of pharmaceutical contribution and treatment satisfaction levels.
Unfortunately, these pharmaceuticals are not sufficiently effective at improving day-to-day functioning for people with dementia or at relieving the burden of care placed on their family members or caregivers. Additionally, survey results have suggested that unapproved pharmaceuticals are considered more effective at responding to the symptoms that accompany dementia compared to those that are currently approved. Moving forward, expectations are high for both pharmacotherapy and non-pharmaceutical treatments that will help improve accompanying symptoms or reduce the burden of care in addition to slowing cognitive decline.

■Measures needed to establish new dementia treatments
To develop new pharmaceuticals or to establish new forms of pharmacotherapy, their effects must be appropriately assessed through clinical trials and other methods. Although every company, university, and research organization is doing their best to contribute to this effort, the R&D process is greatly hindered by the deep connections the pathologies of non-hereditary Alzheimer’s disease have to other diseases, as individual pathologies are uncommon.
There is also room for discussion on the current circumstances surrounding the strong tendency to rely on cognitive tests to evaluate pharmaceuticals and treatment methods. After all, we know that there is a great range of variation in the results of cognitive tests, even among people with dementia. The Dominantly Inherited Alzheimer Network (DIAN) conducted a clinical trial called the DIAN-TU study that found no significant difference in treatment results for inherited dementia using cognitive tests.
Therefore, it is desirable that appropriate biomarkers are introduced as diagnostic indicators to supplement cognitive tests. Biomarkers are diagnostic indicators that are based on pathological processes, blood and cerebrospinal fluid, and images. Research is being conducted on the use of biomarkers to continuously and objectively evaluate biological changes to detect dementia early – sometimes years before clinical symptoms manifest. The DIAN-TU study also showed treatment-related changes in biomarkers that were not detected by cognitive tests. Digital biomarkers obtained using wearable technology and similar tools not only provide early, continuous data on the condition of the person in question, they are inexpensive and are minimally invasive, so future developments are anticipated.

■ Future developments in dementia treatment and R&D
In the future, the perspective of intervention in earlier stages before symptoms manifest will grow more important in dementia treatment and R&D. It has been pointed out that interventions using currently-approved pharmaceuticals that begin after symptoms emerge or have progressed are already too late and that the effectiveness of said pharmaceuticals at improving symptoms is somewhat limited. To develop effective forms of early intervention, the scope of dementia R&D is expanding. Efforts are underway to develop appropriate diagnostic indicators to identify optimal intervention timing and non-pharmaceutical treatment methods primarily related to diet and lifestyle factors.
Building partnerships that overcome the barriers between industry, academia, government and civil society will be essential to overcome the hurdles encountered in R&D for dementia to successfully develop effective forms of early intervention. For example, clinical trials for dementia treatment face significant difficulties when recruiting participants. However, large-scale and innovative efforts are advancing, such as the establishment of systems like the Japan Trial-Ready Cohorts (J-TRC: an online research tool for the development of preventative pharmaceuticals for dementia), which enables volunteer participation in research support. We hope that industry, academia, government, and civil society will continue to cooperate on developing better treatments and research methods for dementia.

<[Event report] The 85th HGPI Seminar –The Characteristics and Current Situation of Decision-Making in Healthcare (May 22, 2020)