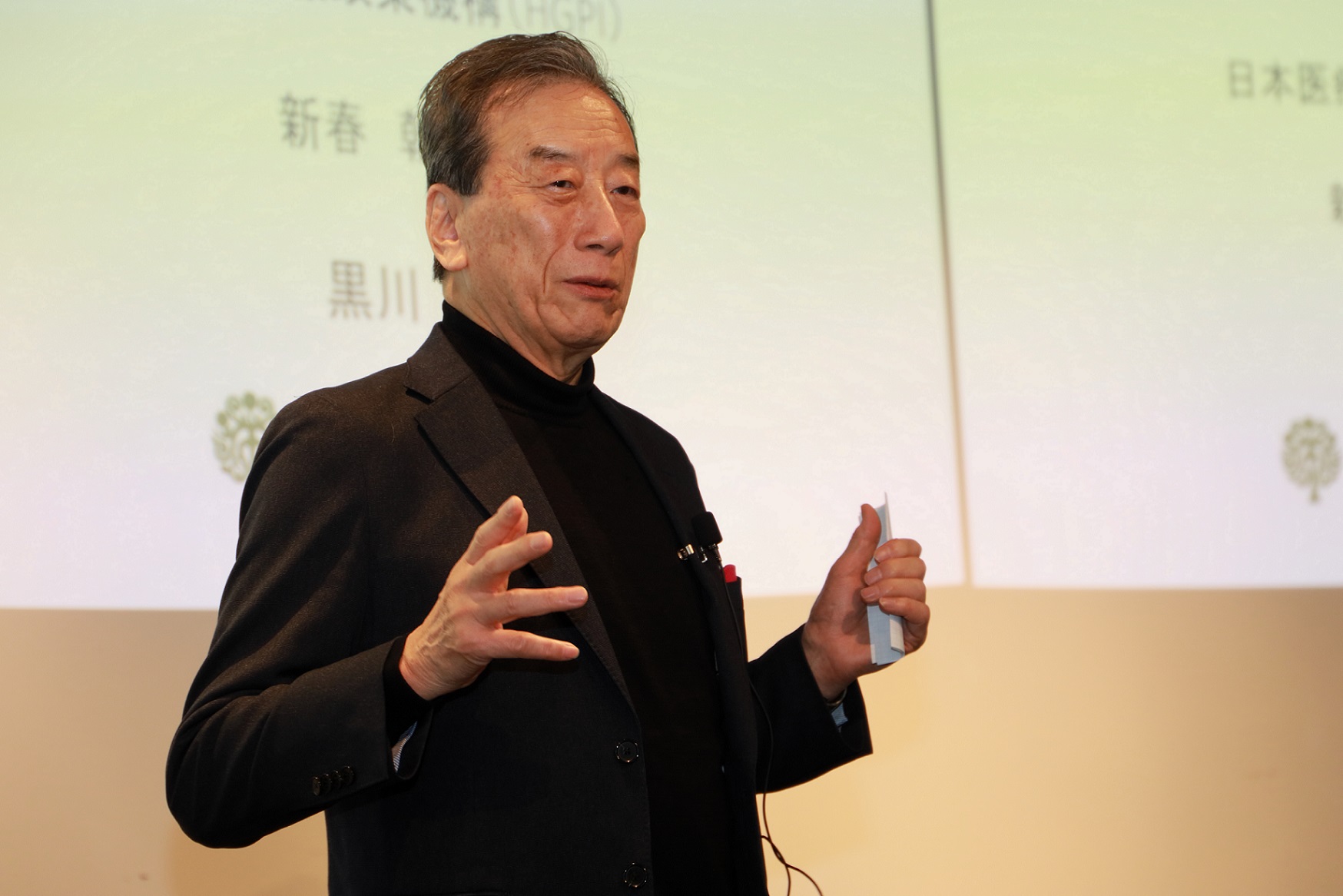 At the 83rd Breakfast Meeting, Health and Global Policy Institute (HGPI) Chairman Dr. Kiyoshi Kurokawa gave his annual presentation. This year’s presentation was entitled “A New Vision for 2020” and covered the following themes. Also, various topics were discussed with everyone in attendance.

■Governance issues are causing Japanese organizations to stagnate
In recent years, organizational governance has been the main theme in every sector. An especially important problem is getting those at the top to resign when an organization’s performance is poor. Companies can be evaluated objectively using financial indicators such as stock prices and earnings, but in Japan, it is difficult to change who is in charge according to such results.
One of the reasons for that is organizations in Japan lack outside perspectives. Japan lacks groups that fulfill the functions of executive boards in U.S. organizations. Is it not important to govern those in top positions by establishing boards or search committees? Boards serve to check those in top positions and dismiss them when necessary, while those in top positions can also dismiss board members. Such a structure is necessary to provide a healthy sense of mutual tension.
Another likely cause of this problem is insufficient diversity in the individual backgrounds of human resources. The fluidity of human resources is low in Japan, where people mainly build their careers within single organizations. For example, if someone working for a bank possesses certain skills that are in demand for their field, it may be possible for them to obtain employment at another bank. However, cases of that actually happening are few and far between in Japan.
To give some credit, the career model in which individuals spend their entire career in one company or organization was successful to a certain degree in the era of continuous economic growth centered in manufacturing after World War II. However, it is now the era of high-speed information communication societies and advancing technological change. Horizontal connections within organizations may have become more important that vertical ones, and from the perspective of governance, the presence of people with diverse perspectives is also important.

■Reform society by raising a young generation that asks “Why?”
Two elements that are intimately related in the aforementioned career model are a culture of fearing mistakes and an educational model that emphasizes the standard distribution of test scores. A significant portion of the problems currently facing Japanese society is rooted in education. I believe that educational reforms are extremely important for Japan’s future.
The accumulation of knowledge has always been a central educational value. However, we can now look up anything online, so just knowing everything is no longer valuable. What will be necessary in the future are the sense to continuously ask “Why?” in response to any phenomenon or problem, the attitude to take personal ownership of efforts to think of solutions, and the willingness to proactively accumulate firsthand experiences and encounters.
From that perspective, I would love for young people to travel abroad. Your first trip abroad gives you a relative sense for both the good and bad aspects of Japan. It allows you to make new discoveries. During my time in the U.S., there were many refugees after the Vietnam War and there was an incident when the Japanese government refused to accept them. That made me acutely aware of one of Japan’s weaknesses. By adopting an international point of view and questioning what is considered common sense in Japan, only then is it possible for someone to begin to think of what they can accomplish and, for the first time, gain a healthy sense of patriotism.
My personal wish is to create opportunities and an environment for young people to experience the world outside of Japan. We must support opportunities for members of the young generation in every situation to challenge themselves. For example, universities could implement tuition systems that lower the economic burden for students who take time off to travel abroad.
Although some are calling for social reform right now, reform takes five to ten years. Reform will accelerate if more young people can develop the attitude that allows them to continuously ask “Why?” To solve the problems facing Japan, education in Japan must also be reformed.

■16th year of HGPI
HGPI was established in 2004 and will celebrate its 16th anniversary this year. Thanks to your support, we have been counted among the top five global and domestic think tanks in a ranking of global think tanks every year since 2017. HGPI is a private think-tank that is non-profit, independent, and global. To maintain our status as a non-profit organization, we operate on your donations. As for our independence, we have maintained a neutral stance in the policy proposals we present to the government. Concerning our status as a global organization, we recognize that many of the challenges facing healthcare policy in recent years cannot be solved without having discussions from global perspectives.
While HGPI has made policy proposals on various themes in the past, in recent years, our project on dementia resulted in the adoption of our policy proposal by the government. On Google Trend (Graph1), which shows graphs depicting trends in search term frequency on Google, Japan saw a significant upward shift for the term “dementia” starting in 2014. That was, of course, partially due to the Japanese government strengthening efforts to formulate dementia policy and increased publicity for dementia, but I believe that HGPI was able to make some small contribution to that trend.
(Graph1) 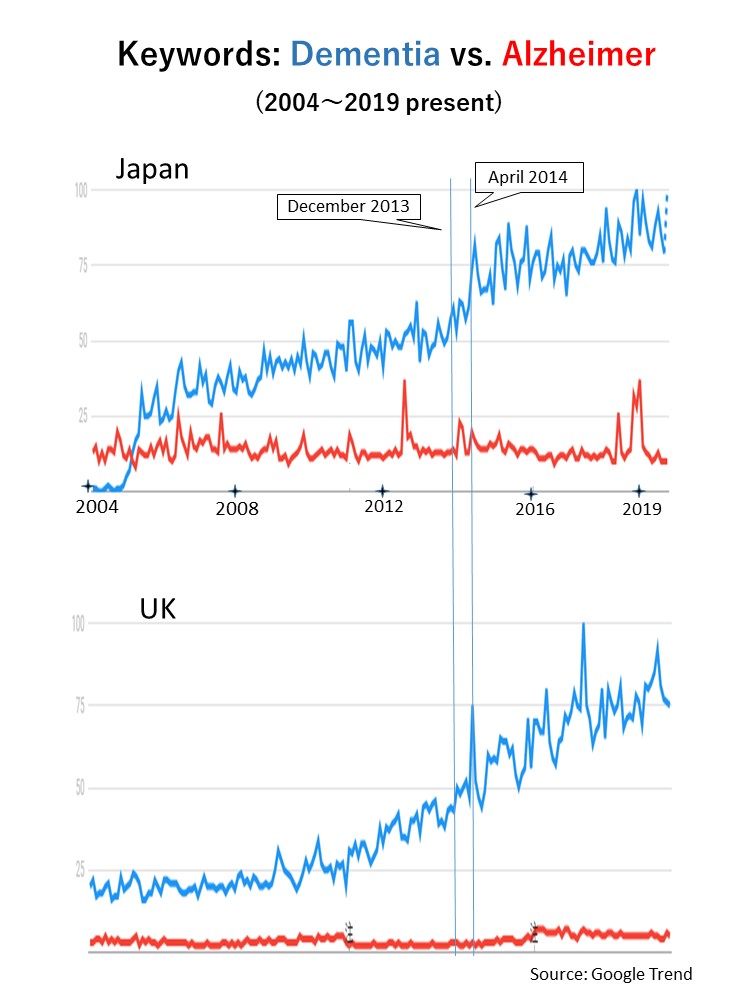 HGPI’s mission is to help citizens create health policy. We are supported by each and every individual and we rely on your guidance. I would like for HGPI to continue participating in this policy community. Please continue to help me develop the many young staff members working at HGPI by carefully watching over them and giving them the strong words of encouragement they need to grow. 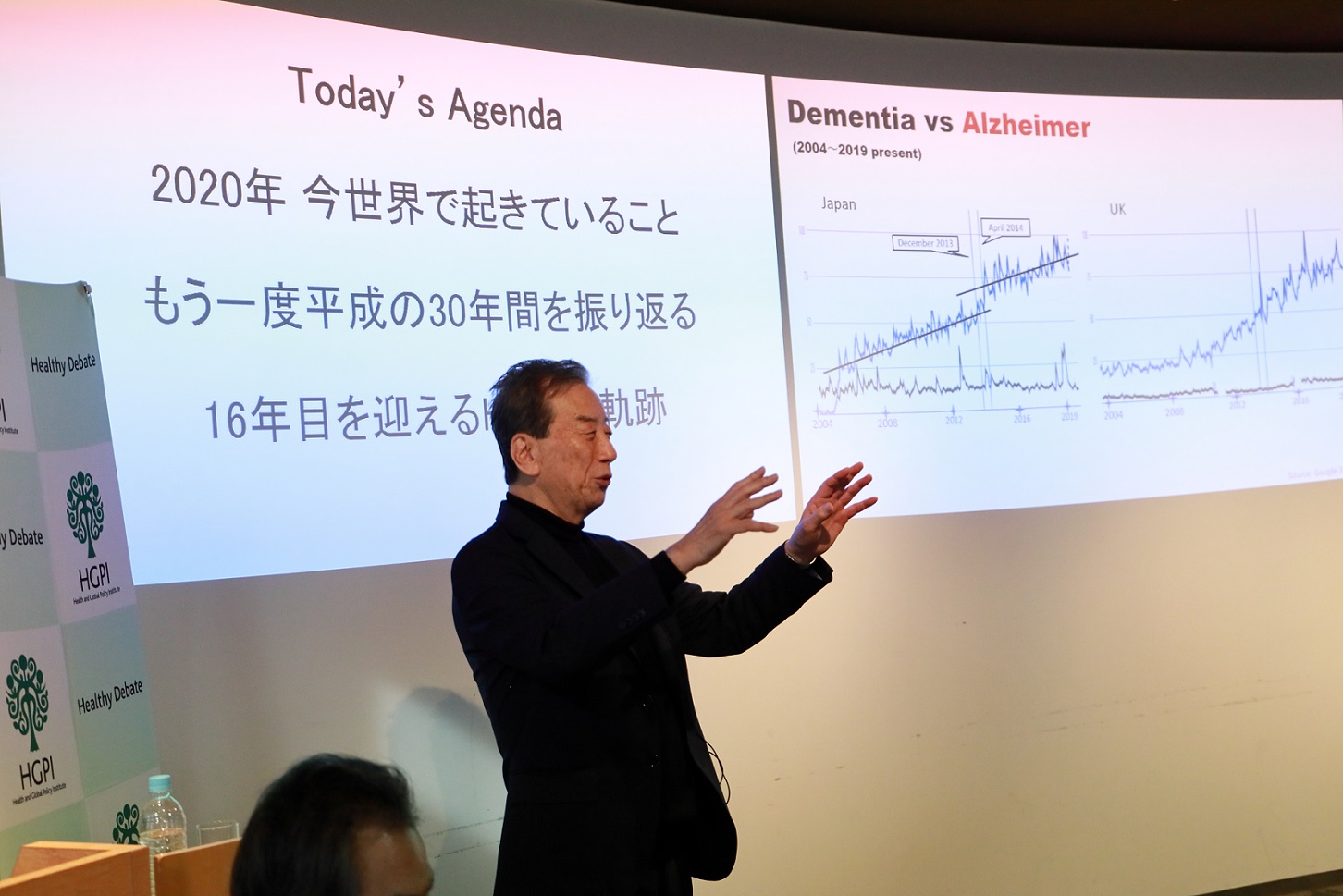 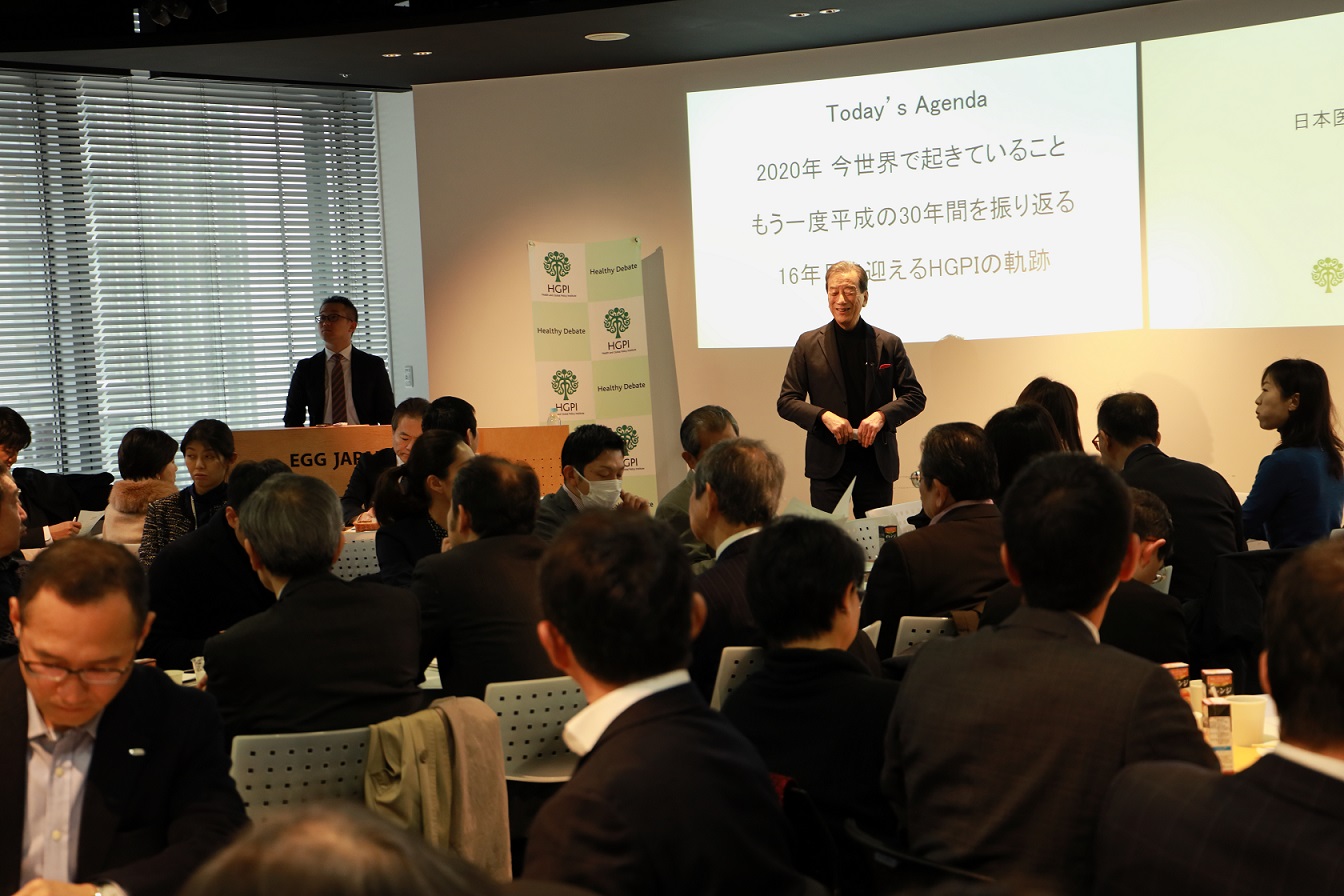 ■Profiles
Dr. Kiyoshi Kurokawa (HGPI Chairman)
Dr. Kiyoshi Kurokawa is a professor emeritus at the National Graduate Institute for Policy Studies (GRIPS), Member of World Dementia Council (WDC), International Scientific Advisory Committee (ISAC), and Harvard T.H. Chan School of Public Health, John B.  Little (JBL) Center for Radiation Sciences. After graduating from the University of Tokyo Faculty of Medicine, he served as a professor at the School of Medicine of UCLA (1979-1984), University of Tokyo (1989-1996), the dean of Tokai University School of Medicine (1996-2002), the president of the Science Council of  Japan  (2003-2006),  the science advisor to the  Prime  Minister  (2006-2008),  World  Health Organization (WHO) commissioner (2005-2009), Chair and Representative Director of Global Health Innovative Technology (GHIT: 2013.1-2018.6) and the executive member of many other national and international professional societies. He was also the chairman of the Fukushima Nuclear Accident Independent Investigation Commission by the National Diet of Japan from December 2011 to July 2012. (His website: http://www.kiyoshikurokawa.com/en)