[Event Report] The 105th HGPI Seminar – A Close Look at HGPI’s “Public Opinion Survey on Child-Rearing in Modern Japan” From the Perspective of Gender (June 3, 2022) 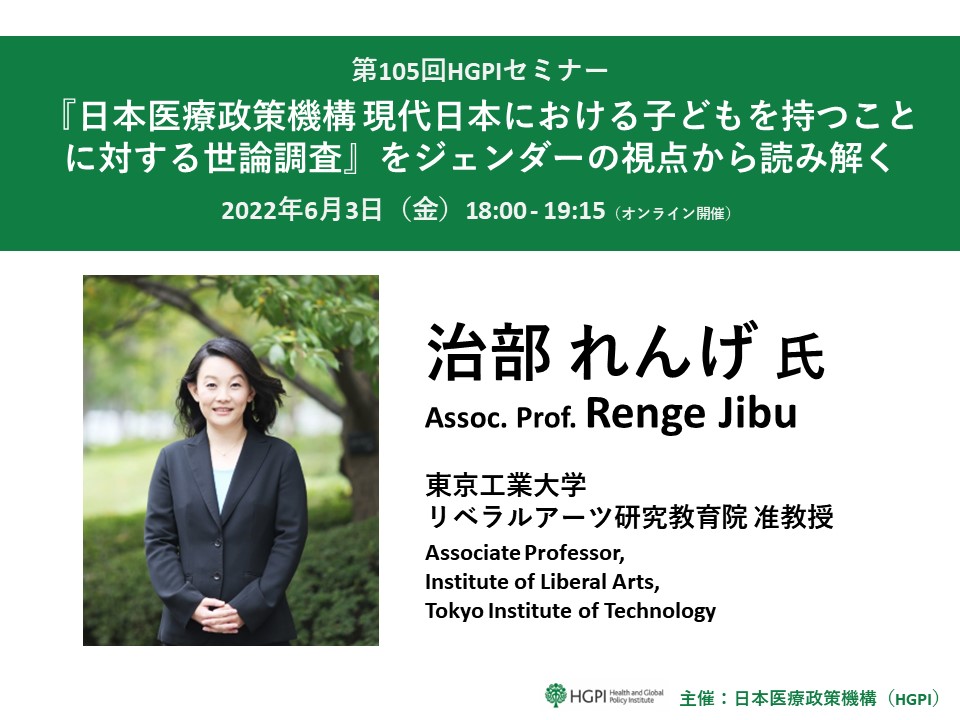 Since its start in FY2016, the Health and Global Policy Institute (HGPI) Women’s Health Project has conducted surveys aimed at achieving well-being for each woman and has advanced activities for policy recommendations on women’s health through its efforts at Youth Terrace, our reproductive health platform.

In FY2021, the Women’s Health Project conducted “The Public Opinion Survey on Child-Rearing in Modern Japan,” a nationwide online survey of 10,000 men and women ages 25 to 49. Its aim was to identify and propose specific measures that will be necessary and effective for creating a society in which anyone who wants to conceive is able to do so.

The survey results showed there is room for improvement in health literacy for all of society regarding topics like fertility and infertility in men and women, as well as for women specific health concerns. The results also suggested factors related to having children among people who want them include: history of diagnosis and treatment for endometriosis, uterine fibroids, and polycystic ovary syndrome (PCOS); age at first gynecological examination; annual income and employment status; and relationships in communities during childhood and relationships with nearby children later in life. In response to these findings, the Women’s Health Project presented recommendations regarding women’s health from the following four perspectives.

For a detailed report on the survey results, please visit this link.

The HGPI seminar featured Professor Renge Jibu, Associate Professor at the Tokyo Institute of Technology Institute for Liberal Arts and a member of the survey advisory board, who gave a lecture based on the survey report titled, “A Close Look at HGPI’s ‘Public Opinion Survey on Child-Rearing in Modern Japan’ From the Perspective of Gender.”

At the seminar, in addition to issues related to reproductive health and rights education in elementary and middle schools in Japan and the importance of health literacy, Professor Jibu also explained the survey with a focus on the policy decision-making process based on her past experiences being involved in various policies for topics like gender equality.

■ Gender equality and related issues are deeply rooted in our everyday lives. Therefore, it is important to eliminate unconscious gender biases that many people possess

“Achieve gender equality” is the fifth Sustainable Development Goal (SDG). Opportunities to encounter the concept of “gender” have also been increasing in recent years.

“Gender” refers to the perceived differences between sexes that have been socially and culturally constructed, while the term “sex” refers to differences based on biological sex or sex assigned at birth. For example, someone’s sex may be assigned as “female” at birth, which is then written down in their maternity passbook and on their birth certificate. We also see that outfits worn during traditional events are often assigned according to sex. During Shichi-Go-San celebrations, girls are dressed in kimono while boys wear hakama or suits.

From the perspective of gender equality, attitudes or assumptions based on differences in biological sex such as, “Boys should play outside with lots of energy” or “She is strong-willed for a girl,” are considered “gender bias.” Gender bias is deeply rooted in our everyday lives and many people possess such biases unconsciously.

■ From a gender perspective, rather than focusing on current laws and policies in Japan, this survey progressively implemented perspectives on basic rights and diversity in its design

Two aspects of this survey’s design are particularly deserving of recognition. The first is that its objective is in line with Sexual Reproductive Health and Rights (SRHR), stating, “This survey was conducted based on the principle that reproductive health and rights (or SRHR) are fundamental rights belonging to all individuals and couples (as outlined in the Programme of Action Plan presented in 1994 by the International Conference on Population and Development (ICPD)), and that population is not a matter that regards the number of people, but is an issue concerning dignity and quality of life for each individual.” Because Japan’s public pension operates under a pay-as-you-go system, discussions regarding the number of children often focus on the desire to meet economic requirements for supporting tax and social security systems in the future. In practice, government discussions on measures to address the declining birthrate also have the tendency to focus on meeting economic needs. However, deciding whether to have children, when to have children, and how many children to have are basic human rights of women. The fact that discussions on countermeasures for the declining birthrate that focus on how to increase the number of children are missing perspectives on SRHRis an issue. On the other hand, this survey uses SRHR as its basis. It clearly states early on that population is an issue of individual dignity, and from a gender perspective, this point deserves high recognition.

The second aspect is that in the section about respondent characteristics, this survey provided options for both “biological sex” and “gender identity” based on the concept of sexual orientation and gender identity (SOGI). The question on marital status also provided options that allowed for diverse responses. Instead of assuming respondents only represented heterosexual, legally-married couples, the survey also included same-sex couples, demonstrating this survey’s progressive perspective on diversity compared to current domestic laws and policies.

■ One key aspect of the survey is the fact it defined “health literacy” as, “The ability to utilize knowledge to make health-related decisions, rather than simply possessing it”

The survey report uses a definition of “health literacy” that means “The ability to utilize knowledge to make health-related decisions, rather than simply possessing it.” This demonstrates that it emphasized the need for respondents to know about their own bodies and have the capacity to change the situations in which they find themselves, and that it viewed respect for the individual as a necessary element for creating a society that enables people to live according to their own initiative.

■ There is a need for sex education that is premised on individual dignity and self-determination; comprehensive sex education in schools is currently insufficient

According to the survey report, some of the respondents acquired the knowledge they possess on health-related topics during school education. At the same time, the survey also showed that knowledge on pregnancy and SRHR is inadequate. In other words, while the nature of sex education at school is changing, it is not yet sufficiently comprehensive.

Only teaching people information like the mechanisms of and ideal ages for pregnancy will not be enough for improving health literacy. To address this need, comprehensive sex education that recognizes the importance of individual dignity and self-determination must be provided during school education.

■ While referring to global policy examples, it is time to shift the discussion on Japan’s declining birthrate to one in which we consider designing systems that allow potential parents to have children

We may be at a point in discussions on Japan’s falling birthrate that we should consider a review of current policy. Looking at circumstances around the world, some countries have achieved society-wide acceptance of declining birthrates while providing generous support for child-rearing. Some say that promoting measures for gender equality can be directly linked to more births, but we must confirm if such measures are actually resulting in more children being born. Furthermore, given the gender and age bias among policy decision-makers in Japan, another challenge for gender policy will be determining how to reflect the voices of women and young people in the policy-making process.

While referring to trends in fertility rates abroad and the policy responses to those trends, it is now time for us in Japan to consider how to design systems that enable people who want to have children to be able to do so.

■ Profile:
Prof. Renge Jibu (Associate Professor, Institute of Liberal Arts, Tokyo Institute of Technology)
Prof. Renge Jibu was a reporter on economics at Nikkei Business Publications, Inc. for 16 years. She previously served as a Fulbright Visiting Scholar at the University of Michigan. She assumed her current position in April 2021. Her current public positions related to gender include Member, Specialist Committee on the Implementation and Monitoring of the Basic Plan for Gender Equality, Cabinet Office; Member, Council for Gender Equality, Tokyo Metropolitan Government; and Chairperson, Gender Equality Promotion Council, Toshima City. She possesses a Bachelor of Laws degree and a Master of Business Administration degree from Hitotsubashi University. She has authored several books including Breadwinning Wives And Childrearing Husbands: A Strategic Exchange of Gender Roles Between Couples (Keiso Shobo), Flame War-Free Corporate Communication Strategies: Gender is the New Business Culture (Nikkei Business Publications, Inc.), The Shock of Transitioning to a Gender Equal Country (Shogakukan Inc.), and Popular Dramas through the Lens of Gender: Korea, Japan, the U.S., and Europe (Kobunsha Co., Ltd.).

< [Event Report] The 106th HGPI Seminar – The Construction of COVID-19 Vaccination Management Systems and Information Sharing in the Future (August 5, 2022)

[Event Report] The 104th HGPI Seminar – “Prospects for Building an Integrated Community Care System That Can Respond to Mental Disorders and for Outreach Support” (March 4, 2022) >

[Event Report] The 105th HGPI Seminar – A Close Look at HGPI’s “Public Opinion Survey on Child-Rearing in Modern Japan” From the Perspective of Gender (June 3, 2022)