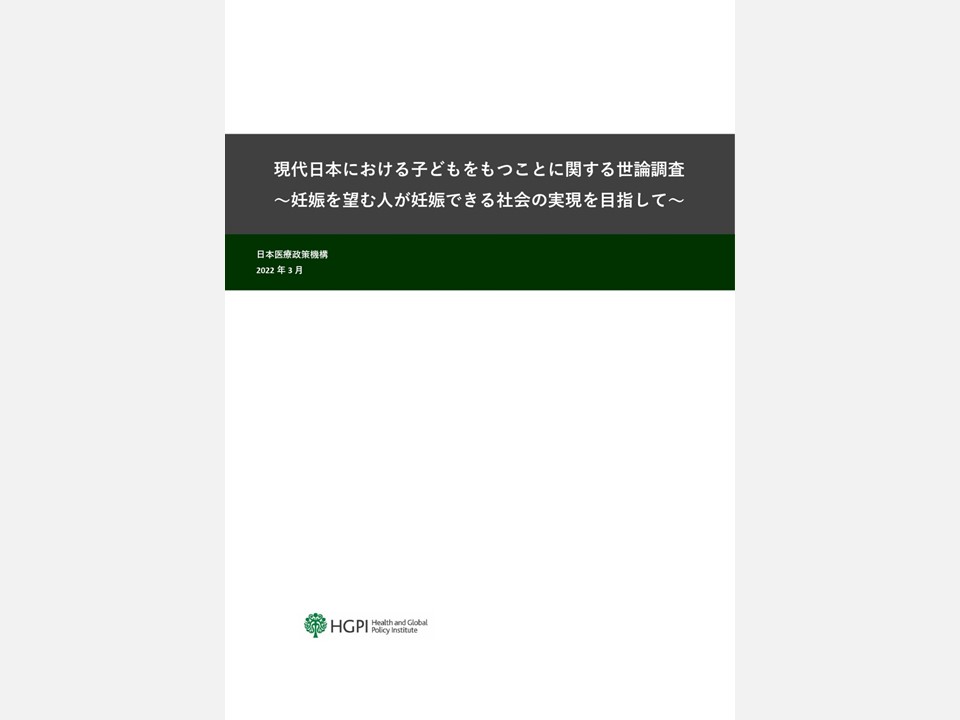 To mark the occasion of Women’s Health Week (from March 1 to March 8), the Health and Global Policy Institute (HGPI) Women’s Health Project released the final report for “The Public Opinion Survey on Child-Rearing in Modern Japan.”

Since Japan’s total fertility rate fell to a record low of 1.57 births per woman in 1990, an event known as the “1.57 Shock,” the Government of Japan has worked to reverse the declining birthrate through various laws and measures. The “Outline of Measures for Society with Decreasing Birthrate” enacted by Cabinet Decision in May 2020 set a specific numeric target of 1.8 births per woman and included measures for reviewing child-rearing allowances and eliminating daycare waiting lists, improving working conditions for young people, and providing parental leave to men. However, statistics presented in June 2021 reported the total fertility rate for 2020 was 1.34, or 0.02 points lower than the previous year, making it the fifth consecutive year of decline. New measures to address the declining birthrate were implemented in response, including expanded subsidies for fertility treatments. Discussions on expanding insurance coverage for fertility treatments are currently underway, but many people feel these measures do not sufficiently reflect the needs of members of the generation who wish to conceive.

Given these circumstances, the HGPI Women’s Health Project conducted a nationwide online survey of 10,000 men and women ages 25 to 49 to identify and propose specific measures that will be important and effective for creating a society in which anyone who wants to conceive is able to do so.

The survey results showed there is room for improvement in health literacy for all of society regarding topics like fertility and infertility in men and women as well as women specific health concerns. Results also suggested factors that are related to having children among people who want them include: history of diagnosis and treatment for endometriosis, uterine fibroids, and polycystic ovary syndrome (PCOS); age of initial gynecological examination; annual income and employment status; and relationships in communities during childhood and relationships with nearby children later in life.

■ Key findings of the survey

Perspective 2: Establish a system to improve access to gynecologists.

Perspective 3: Provide economic support to people who want to have children and advance work style reforms.

Perspective 4: Provide people with opportunities to interact with children and promote the creation of mechanisms for mutual support in communities.

*The English report will be posted as soon as the translation is complete.

Please note that opinion exchanges were held with supporting companies and organizations when conducting the survey, but decisions regarding the reflection of opinions shared during those discussions in the survey were made independently by the survey team.

For inquiries regarding this survey, please contact Ms. Imamura or Ms. Kawata at HGPI.