[Event Report] The Third Meeting of the “Young Professionals’ Roundtable for Public-Private Opinion Exchange on Social Security and Healthcare Policy,” a Joint Initiative from the Public and Private Sector Co Creation Hub and Health and Global Policy Institute (November 26, 2021) 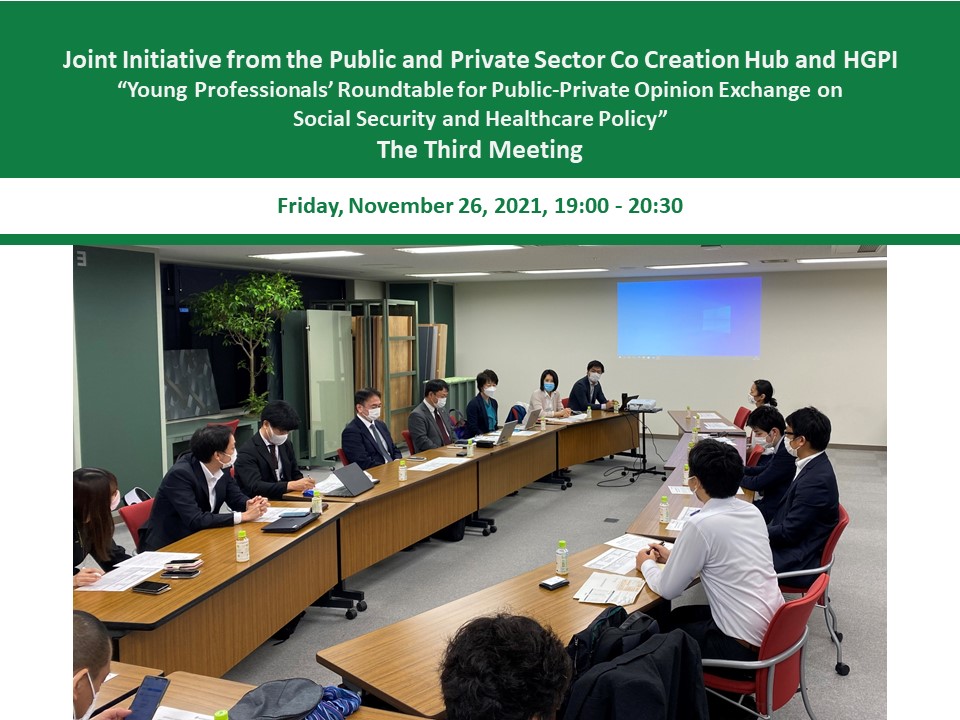 The Public and Private Sector Co Creation Hub and Health and Global Policy Institute (HGPI) co-hosted the third Young Professionals’ Roundtable for Public-Private Opinion Exchange on Social Security and Healthcare Policy, titled “Thinking About the Future of Healthcare and Society in the Context of Dementia.” The first two roundtables, titled “Transforming Japan’s Healthcare with Data Health,” focused on policy issues in the field of data health and were held on September 28, 2021 and October 25, 2021. At the third roundtable, focus was placed on the field of dementia, a topic mentioned during the discussions on data health.

To begin the roundtable, Ms. Yuri Shimpo (Acting Manager, Dementia Project Promotion Office, Senior Market Division, Sompo Holdings, Inc.) talked about the development of data-based solutions using a Real Data Platform (RDP) and explained the Sompo Dementia Support Program, a cross-stakeholder initiative aiming to create a society of prevention and coexistence. Next, Mr. Toshihiko Yusa (General Manager, Department of Integrated Dementia Strategy and Executive Officer, Planning Department, Eisai Co., Ltd.) gave a presentation on the current circumstances facing people living with Alzheimer’s disease, who are said to account for 60% of all people living with dementia. He shared emerging issues related to the cost of informal care and introduced collaborative efforts with local governments for early detection and diagnosis. After these civil society-led efforts for dementia were introduced, participants deepened the discussion by exchanging opinions and ideas for approaching the public-private partnerships that will be needed in the future while reinforcing mutual understanding between the public and private sectors.

Key points of the discussion

*Future roundtables are also planned to be held over multiple sessions.

The Public and Private Sector Co Creation Hub engages in projects related to environmental improvement, facility operations, and supporting and encouraging collaboration and engagement among alliance organizations to generate new value to provide society through public-private co-creation. To achieve this, the Hub provides opportunities for conversations to be held among representatives of both the public and private sectors (including those from Government and municipal offices, local governments, administrative bodies, corporations, universities, NPOs, and civil society) spanning a variety of fields. The Public and Private Sector Co Creation Hub has been commissioned by Chuo-Nittochi Co., Ltd. to conduct a trial project for the Toranomon Innovation Center concept in which it is responsible for supporting initiatives for public-private co-creation at the Public and Private Sector Co Creation Studio.

Health and Global Policy Institute (HGPI) is a Tokyo-based independent and non-profit health policy think tank established in 2004. In its capacity as a neutral think-tank, HGPI involves stakeholders from wide-ranging fields of expertise to provide policy options to the public to successfully create citizen-focused healthcare policies. While holding fast to its independence to avoid being bound to the specific interests of political parties and other organizations, HGPI generates policy options that will be effective in Japan and around the world and actively pursues solutions to global health and health policy challenges.