[Event Report] The 75th Breakfast Meeting—”Learning from Scotland about Promoting Respect for Patients’ Rights and Building Communities Where People with Dementia Can Live with Hope” (February 15, 2019) 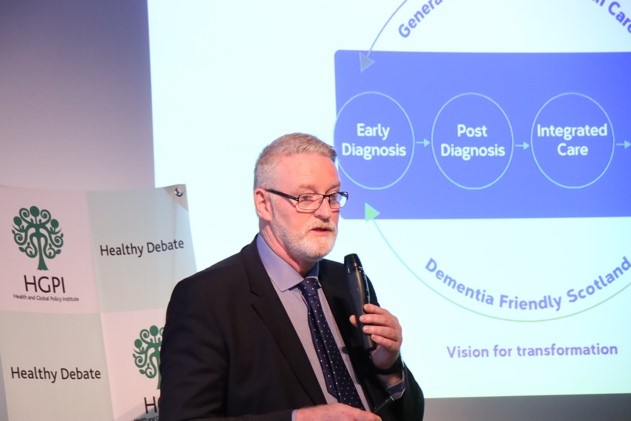 In every country worldwide, led by Japan, longevity continues to drive the issue of population aging. Japan, alongside other countries, recognizes the need to establish community-based integrated care systems that enable older individuals to live with peace of mind in familiar environments. With similar needs also recognized in the field of dementia, Japan is promoting the creation of “dementia-friendly communities” across the country, hoping to help people with dementia to continue living in comfortable, familiar environments for as long as possible.

In terms of reorganizing the daily routines of individuals with dementia and their families, the period of time between the point of diagnosis and the point at which formal medical/long-term care services become fully necessary is considered particularly important. It is hoped that the presence of community connections, including opportunities for employment and social participation during this initial, post-diagnostic period, will enable individuals with dementia to continue serving as members of society and to contribute to the development of dementia-friendly environments.

Jim Pearson (see profile below), from Alzheimer’s Scotland, a global forerunner in the realization of dementia-friendly communities, introduced participants to his organization’s past achievements and future initiatives.

■ Personalized Dementia Support and Dementia Support Models
Alzheimer Scotland views flexible, personalized support tailored to the progression of the dementia as absolutely vital. The organization has formulated and put into practice three post-diagnostic support (PDS) models, staged in accordance with the progression of the disease—a “5 Pillar Model,” an “8 Pillar Model,” and an “Advanced Dementia Practice Model.”

Among these models, the “5 Pillar Model” is considered most appropriate for newly diagnosed individuals and their families, targeting individuals who, following diagnosis, do not yet require in-depth care. The goal of this model is to “enable the individual, following diagnosis, to continue living independently for as long as possible in their preferred environment.” The five pillars are as follows:

In this “5 Pillar Model,” in order to help people newly diagnosed with dementia and their families to avoid isolation, a “Link Worker” provides PDS, facilitating local community connections and playing the role of “partner” in planning for future care.

Scotland’s Third National Dementia Strategy, now underway, clearly states that PDS from a Link Worker is available free of charge for a minimum of one year, a period which can be extended if deemed necessary. That said, the number of Link Workers remains limited, and increasingly long waiting lists have become a concern.

Once an individual’s dementia has progressed to a moderate or advanced stage, more specialized support is then provided according to the “8 Pillar Model” or “Advanced Dementia Practice Model.”

■ The Importance of Listening to the Voices of Individuals
Listening to the voices of individuals with dementia is of particular importance in promoting the creation of dementia-friendly communities. Above all else, listening to the voices of individuals with dementia and their caregivers is the key to providing personalized, need-based support so that people with dementia can continue living independently in their communities.
It will also be vital to continue gathering these voices in collaboration with the members of the Scottish Dementia Working Groups active across Scotland and with multi-stakeholders from various communities.
Working toward community-level initiatives in every area of Scotland will enable the realization of person-centered policies and support services that elevate the voices of individuals.

■ Charter of Rights
The path to person-centered support as outlined by Alzheimer Scotland has not been reached without its share of challenges. Rather, it has been the result of multi-stakeholder discussions and collaboration. Of particular importance among Scotland’s dementia policies, the “Charter of Rights for Dementia” was approved by Parliament in 2009.

Barriers faced thus far in efforts to promote respect for patients’ rights include the following:
・A lack of patient empowerment and a failure to incorporate the voices of individuals due to the nature of the disease
・A paradigm characterized by the continued predominance of the medical model
・Persistence of negative stereotypes including the belief that “people with dementia can’t do anything”
・A long history of discrimination against people with dementia
・Failure of the status quo, in terms of care services and systems, to improve outcomes

The 2009 approval of this Charter of Rights has served as a major driving force behind the establishment of National Dementia Strategies since 2010.

■ Future Developments
Scotland’s National Dementia Strategy was initially launched in 2010, with the Second National Dementia Strategy established in 2013, and the Third National Dementia Strategy, in 2017. The current Strategy focuses on care for individuals with advanced dementia and their families, addressing issues such as palliative and end-of-life care. As in the past, alongside even further promotion of evidence-based strategies and clinical research, one policy pillar is the incorporation of voices from individuals with dementia and their communities. Alzheimer Scotland is currently engaged in policy-promoting activities, including participation in dementia research at the University of Edinburgh. 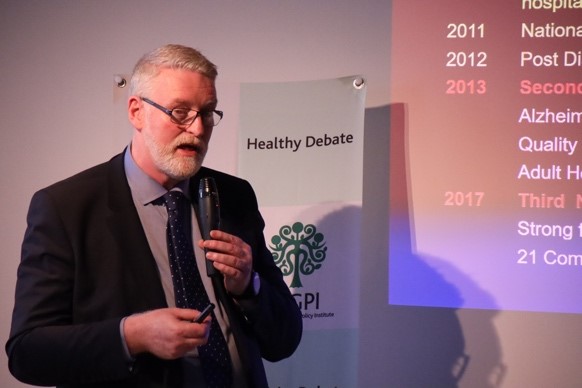 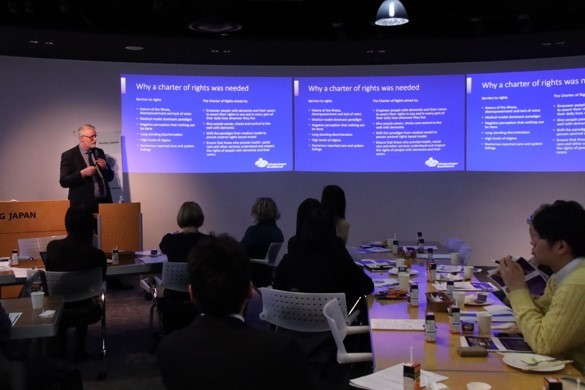