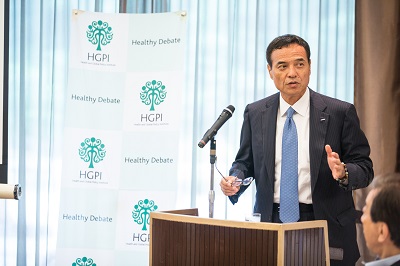 On June 14, we hosted a special breakfast meeting with Mr. Takeshi Niinami, Member of the Japanese Government’s Council on Economic and Fiscal Policy, and President of Suntory Holdings Limited.
■Summary of the Event
As you know, on June 6, 2017, the Japanese Government established a new “Basic Policy on Economic and Fiscal Management and Reform” following discussion by the Council on Economic and Fiscal Policy. This Basic Policy will serve as a framework for the establishment of fiscal soundness and stable economic growth.
The Council made a point to put a focus on social security because social security expenditures now account for about 33% of all expenditure by the Government. Through the promotion of drastic reform, we aim to advance efforts to maintain the social security system – centering on improvements to productivity across society and national health insurance – and improve quality of life (QOL). Reform does not just mean cuts; the aim of the Basic Policy is to raise the quality of human resources and enhance the latent growth rate of the entire nation.
There are 5 particular points I want to raise about the reform of social security in the Basic Policy.
1.The aim to halve regional differences in medical expenditures
2.The implementation of drastic reform in the drug pricing system
3.The aim to improve the functions and value of pharmacies
4.The implementation of increases and decreases for grants supporting the Advanced Elderly Medical Service System to bring them to amounts under the highest legal limit for such grants
5.The reform of the system for subsidy adjustments When we discussed the Basic Policy, we talked about importance of evidence for the maintenance of the social security system in Japan. By 2025, everyone in the baby boomer generation will be considered to be in the “advanced elderly” age group. We should prioritize the use of databases, and efforts to make a variety of data open and transparent in the social security field in anticipation of that.
In order to construct a sustainable medical system, we should shift the focus of medical care from “cures” to “care.” Making use of new technology, we want to work toward a final goal of increasing each citizen’s healthy life expectancy and consequently improving their QOL. During the Q&A session, meeting participants and Mr. Niinami had a lively exchange of ideas about the specific content of the Basic Policies and the future direction of the medical field.
(Photo by Kazunori Izawa)