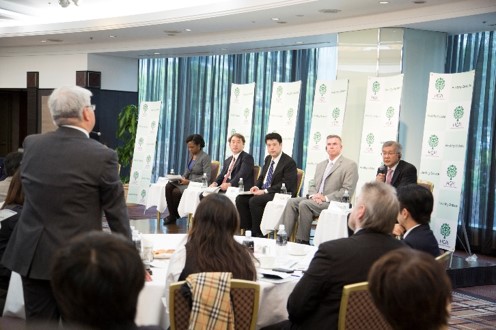 U.S.-Japan Expert Meeting on AMR “Japan’s Role in Addressing Global Antimicrobial Resistance” was convened jointly with the Washington-based Center for Strategic and International Studies (CSIS). As AMR presents an increasingly serious threat to global public health, it is imperative that all stakeholders urgently coordinate and take necessary action at national and international levels across both public and private sectors. This meeting provided a platform for open multi-stakeholder discussions on AMR-related policy with active participation of experts from the private, public and academic sectors.

Welcoming remarks were given by Dr. Kiyoshi Kurokawa of HGPI and Dr. Audrey Jackson of CSIS. Reflecting the history of G7, Dr. Kurokawa has addressed rising threats of AMR in international communities, and Japan’s role. Dr. Jackson expressed further need of policy development and collaboration by multi-stakeholders. Keynote address by Ministry of Health, Labour and Welfare provided an insight into Japan’s national action plan for AMR, and future initiatives by Japanese government as G7 chair country of 2016.

In response to the rising urgency of antimicrobial resistance (AMR), there has emerged a strong global political will to identify and implement solutions. This session focused on regional and global initiatives including WHO AMR Global Action Plan and National Action Plans from U.S. and Japan. Experts and government representatives discussed existing and future bilateral and multilateral collaborations and explored ideas for G7 action.

The panel elaborated on the action plans of U.S. and Japan, touching upon the background of action plan setting in their respective countries and each plan’s distinctive features. The audience joined the lively discussion with many questions and comments regarding the formulation of the Communique of the Tokyo Meeting of Health Ministers on AMR, WHO’s role in the Asia-Pacific region, the current status and future global expansion of Japan’s unique surveillance program, JANIS, and frameworks for international cooperation on AMR.

AMR is an immediate global threat which calls for multi-stakeholder partnership. As Antibiotic development has slowed over the years, innovative mechanisms are urgently needed to promote both development of new antibiotics and appropriate access and use. In this session, experts discussed possible R&D frameworks for public-private-academia partnership to address the gaps in economic incentives for antimicrobials development.

A wide range of issues were addressed, including antimicrobial stewardship, harmonization of guidelines for antibiotics clinical trials, new schemes for drug price calculation, and the importance of diagnostic technology. New mechanisms for drug development were openly discussed among the panel consisting of experts from the public, private and academic sectors, followed by a number of ideas and questions raised by the audience for development of platforms to foster innovation.


Councilor Keizo Takemi has been addressing policy issues in the global health area including AMR over the years. In his remarks, he reinstated the need to tackle this complex and pressing issue of AMR with a cross-sectional and multi-disciplinary approach and a global consensus.