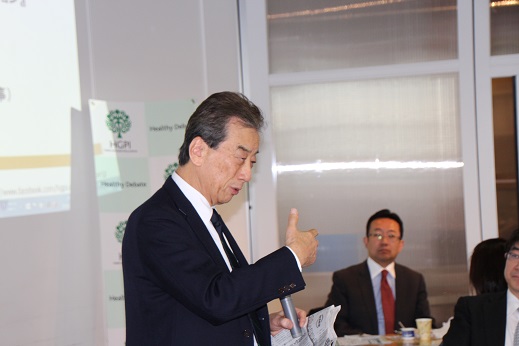 The most urgent issue in Japan is accessibility, which refers to the ability of people to access health care. Free access it is unique to Japan, where a majority of health care costs are covered by public funds. Although changing the existing system is challenging, medical doctors should act as gatekeepers and the Japan Medical Association should promote medical doctors’ role as gatekeepers.
The shortage of physicians is often pointed out as a problem. Yet, the issue may be that there are too many hospitals. To address this, physicians could utilize an open system of practice in which they visit major facilities to support hospitals’ ability to provide 24 hour care.
Dementia is another looming issue that requires us to think about end of life care, including alternatives to simply prolonging life.

I presented my view 20 years ago at the University of Tokyo, saying that doctors need five “M”s. The first “M” is market. Doctors must be able to handle market pressures. The second is management. Doctors need management skills. The third is molecular biology. Research on life phenomena at the molecular level, including genomic analysis, is progressing quite rapidly. Advances in this area will make hypothesis-based diagnosis increasingly accurate. The fourth is media. The use of media is important because it allows for information to be increasingly open as internet technology develops. The fifth is morals. We live in an era of open information requiring that individuals exude a higher moral standard than ever before. Globalization is affecting all levels, including businesses, NGOs, and academia. Japan is attempting to export not only health care but also its health care system. However, the majority of what is being exported is limited to medical devices and technology. I recommend overseas development including hospital management. Those with good ideas must act on their own instead of asking the government to take action. If you move into action, young people will respond to that and take action as well. Perspectives on recruitment and employment in Japan have been changing after 3.11. Although it takes time, many people are willing to take innovative action. Highly talented people play active roles at the global level. Yet, there are few people with global minds in Japan. Japan certainly has a positive aspect, yet it is important to know its weaknesses. Visitors to Japan often comment on how politely people line up while waiting for a train and on how people stand on one side of an escalator to allow others to pass. Being considerate of others is certainly a positive aspect of Japanese culture. However, this characteristic is also a weakness of Japanese people. For example, it is uncommon to disagree at meetings out of consideration for others and what others are thinking. Speaking one’s opinion is important. Listening to other opinions and presenting one’s own opinions will create many ideas and choices.