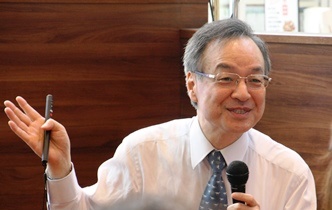 ■Examples of QI in Use at St. Luke’s International Hospital

The same process takes place with patients with diabetes whose HbA1c values shared with attending physicians. Physicians are able to see what medicines have been prescribed by checking electronic medical records. Data is then utilized during consultations with specialists and during study sessions to better understand the most appropriate treatment for patients.

The use of QI has led to a decrease in the incidence of catheter insertion complications. By inviting outside speakers to give lectures, providing staff trainings, using an authorization system, we have been able to drastically reduce the number of complication cases.

Hand hygiene, which helps to prevent hospital-acquired infections, has also greatly improved. It began with direct observation by a supervisor and moved onto monitoring with use of video cameras. Eventually, 24-hour surveillance cameras were installed to monitor activities across the hospital. Using this surveillance system, we are able to give feedback and engage in discussions on the challenges of handwashing with medical personnel who fail to maintain hand hygiene. As hand hygiene has improved, the rate of infections has decreased.

The provision of high-quality healthcare to all patients of St. Luke’s International Hospital is the responsibility of the president. QI is summarized into books available to all hospital staff and most indicators have improved as a result. Staff is motivated by other physicians and hospitals who are working to improve using QI and the Hawthorne Effect (being observed leads to improved performance) plays a role as well. Using the PDCA cycle in the medical workplace is also important and effective.

■QI in the International Context

QI is not appropriate for all the cases. For example, hospitals with unfavorable QI values tend to have a large number of emergency patients. Therefore, QI cannot be evaluated on the basis of values alone; hospitals’ unique settings and the risks they face must also be considered. It is critical to introduce QI at the appropriate hospitals and utilize it to improve and modify behavior within those hospitals.

In March 2014, the OECD ranked Japan 12th among OECD countries. The OECD’s November 2014 report cited the QI Project taking place at St. Luke’s International Hospital’s as significantly impressive and as a potential model for the rest of the country. We hope to continue to contribute to the world.