Commissioned Project by the Reconstruction Agency: The 1st “Hamarassen” Kitchen in Genki Village 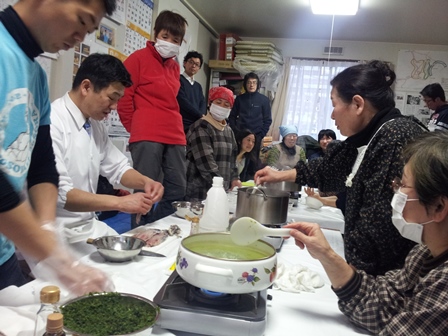 On January 12 (Sunday) 2014, “Hamarassen Kitchen,” a project of the creation of “New Tohoku” by the Reconstruction Agency was held at a temporary housing called Nagahoragenki village at Rikuzentakata city. This project was originally developed by university students who attended in the Global Health Summer Program 2014 held by HGPI. The theme was “Tasty and Vitality through Meals.” Main events were a cooking class using locally-produced food and health consultation by public health nurses. “Hamarassen” means “let’s join us” in a dialect of Kesen area. This project aims to promote health through meals at disaster-afflicted areas, revitalizing the community and community exchange.

The locally-produced food include seaweed stem which is processed and sold by “Nadeshikokai,” which is a women’s group of Rikuzentakata city. Mr. Iwai, a professional chef of a restaurant “Tempura Iwai” at Ginza, Tokyo offered a recipe in order to introduce the flavor and the taste of seaweed stem. Under his guidance, local people prepared Japanese meal. Participants said “taste good!” and “want to try the recipe at home.” The activity was reported through the Iwate Nippo Newspaper, Tokaishimpo Newspaper, and the website of “Nadeshikokai.”