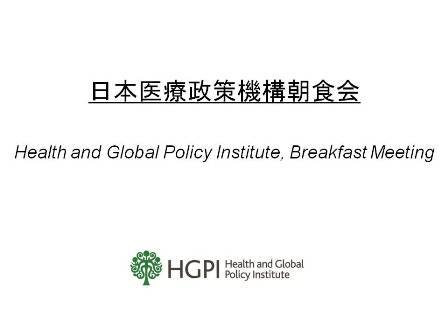 As is widely known, the number of patients with mental disorders continues to grow, especially for depression and Alzheimer’s disease. Moreover, Japan not only faces an increase in the number of people with dementia as society becomes super-aged, but is also characterized by such social issues as the high incidence of suicide as well as mental health and social and economic losses in disaster-affected areas. In response to this situation, in the next phase of the country’s regional medical plan, which came into effect this April, mental disorders have been added to what are regarded as the 4 conventional major diseases (cancer, stroke, heart attack, and diabetes) to create a framework of “5 major diseases” that will be the focus of new prefectural disease control measures.

Amid growing health policy-related interest in this area, at this Breakfast Meeting, we heard from Dr. Kim about his observations during his activities in mental health in the disaster-affected region, and what his findings reveal about the future of the mental health field in Japan. Also, from Dr. Ito, we heard about the current situation and issues relating to mental health in national and local health care plans, and he also talked about the recently established National Mental Health Care Project for Patients with Physical Illness.