43rd Breakfast Meeting -Dr. Rene Duignan, the director of the film “Saving 10,000: Winning a War on Suicide in Japan”- 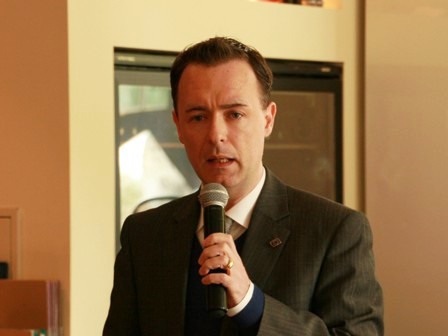 However the suicide rate in Japan is still high, where it is twice the rate in U.S., and twelve times higher than in the Philippines. The director of this film, Dr. Rene Duignan, works as an economist for the European Union in the Tokyo Delegation, and he had been living in Japan as a Japanophile for more than ten years. In his study about healthcare system in Japan medicine, he was motivated to act on the high suicide rate in Japan. With that, he spent three years to document a film featuring the interviews of 95 people, taking one year for each in interviews, shooting and editing. The film had drawn a variety of problems surrounding suicide, which including the problem of consumer finance, life insurance, economic loss brought by suicide, addictions, and mental health issues. It also recorded issues where people seldom speak about, and introduced the various on-going suicide prevention efforts. The film concluded with ten take home messages, where Dr. Rene urges the audience to seriously consider the issue of suicide through broad and different angles. (medium: Japanese)

■Theme
Meeting Dr. Rene Duignan, the director of the film “Saving 10,000: Winning a War on Suicide in Japan”

■Speaker
Dr. Rene Duignan
He was born in Ireland in 1971, and graduated from University of Dublin. He came to Japan in 1997, and gained his PhD in International business with Aoyama Gakuin University. He had been working as a lecturer in Aoyama Gakuin University for the courses in Global Business, European Economy etc. He was also a teaching fellow in Temple University, where he taught healthcare system. After working with Tokyo Office of Banca d’Italia, he is now working as an economist for the European Union in the Tokyo Delegation since 2011, dealing with the economic problems of Europe and Japan.
The documentary film “Saving 10,000: Winning a War on Suicide in Japan” is accessible at this website. http://www.saving10000.com/