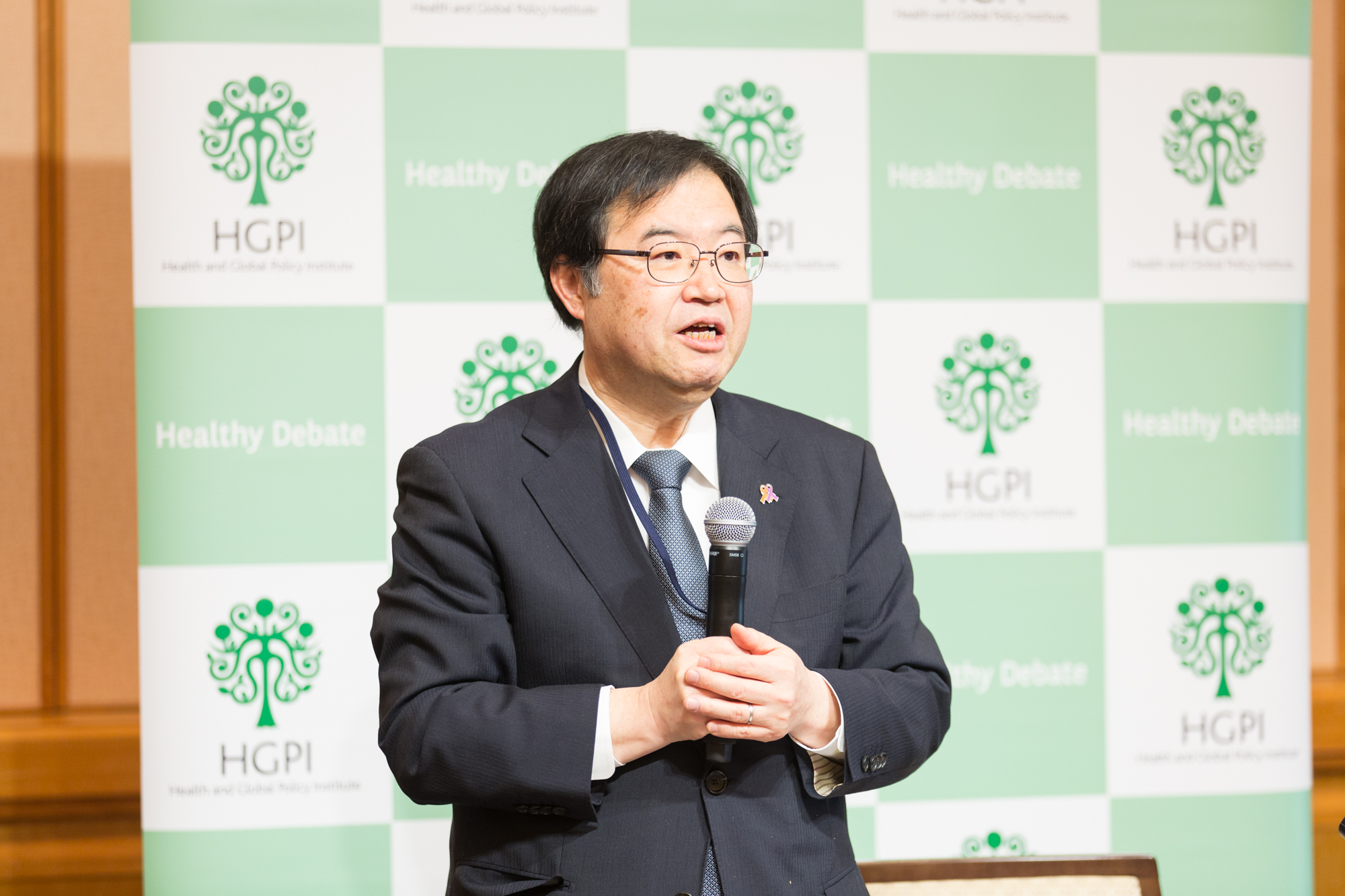 
■Lecture Summary
ーAchieving the goals set for 2025
The Ministry of Health, Labour and Welfare (MHLW) is promoting various initiatives aimed at comprehensive reform of both medical and long-term care by 2025, the year when everyone in the Baby Boomer Generation will turn 75 or older. In particular, while focus has thus far been placed on promoting the development of the Community-based Integrated Care System and on extending healthy longevity, there is now a shift toward promoting “Community Coexistence” and on fostering the well-being of not only older generations but all generations.
The goal of a Community-based Integrated Care System is to create a seamless system by transitioning from binaries such as “hospital/home” and “medical facility/home” and toward a cyclic model of service. This is accomplished by placing “livelihood support and community-based planning” on the x-axis and “medical and long-term care integration” on the y-axis.

Although the Community-based Integrated Care System is merely a concept paper at present, it is a management system or network that will be shaped by putting it into practice in the field. To implement such a system in each community in the future and achieve community coexistence across all generations, Japan needs “to develop comprehensive, integrated, efficient community services,” “to enrich personal services and their management,” “to strengthen the sustainability of human and financial resources,” and “to promote service-provider-led reform by social welfare and medical corporations.” At the same time, the creation and development of society-supporting infrastructure needs to be expedited, including “raising the awareness of policy makers, service providers, users, and the public,” “improving professional training and developing human resources,” and “establishing an information platform/network that uses ICT and AI.”

Looking toward 2025, the goal of the Community-based Integrated Care System is “community-building” itself.

1、Functional differentiation, collaboration, reorganization, and prioritization among healthcare facilities
Regarding the functional differentiation, collaboration, reorganization, and prioritization of medical institutions, we need to formulate a vision for how each hospital will contribute within the community, including through the use of online medical consultations. Visions need to address issues such as whether single hospitals will provide all care in an area, or whether hospitals will share resources and work together to cover an area.

2、In-home medical care, nursing care services, and infrastructure for daily living
Improving in-home care and nursing care services is vital to realizing Regional Medical Care Visions, but it requires that a certain minimum of infrastructure already be in place to support daily living. For instance, even if living at home, without a means of transportation, a person cannot carry out daily tasks such as visiting the post office, the bank, the store, or even the hospital, in which case the foundations of daily life will collapse. Regional Medical Care Visions need to be considered and implemented, taking into account the infrastructure of each region.

3、Environments that promote Regional Medical Care Visions
In terms of ensuring the necessary environment, it will be vital to gather and establish data and evidence that enable comparisons among regions. From now on, the ability to plan the development of healthcare delivery systems using regional data and evidence will be essential. Furthermore, not only the national government but also community leaders, academic institutions such as universities, and even local think tanks will take part in the process. Rather than promoting a top-down approach, we hope to establish infrastructure that enables each individual prefecture and healthcare facility to visualize the big picture and actively make appropriate judgements. The desired situation is one in which the circumstances surrounding regional healthcare delivery systems are grasped objectively, thus optimizing added value for users throughout the entire market.

4、Human resources
In terms of human resources, the number of physicians in Japan per 100,000 people will soon reach the OECD average. Although the number of physicians is increasing, the issue of misdistribution among regions and medical specialties still remains. Revised in 2018, the Medical Care Act and the Medical Practitioners Act aim to improve infrastructure in order to encourage physicians to work in regions facing shortages, to create systems for securing physicians in all prefectures, and to visualize information on the shortage/maldistribution of outpatient care capacity. Another task of urgent importance is the creation of environments that enable female physicians to continue their careers.

ーWork-style reforms for physicians
Although still currently under debate, Japan’s “Work Style Reform Law,” aimed at all sectors, will go into effect beginning April 2019. Its regulations, however, will not apply to physicians until 2024. Aiming for the middle of March 2019, we will examine specific regulation mechanisms as well as measures for shortening working hours. Conclusions will later be disseminated to stakeholders to promote awareness and understanding in preparation for full implementation in April 2024. This initiative is being undertaken not only to reduce the burden placed on physicians, but also from the standpoint of improving the overall healthcare system by improving work-life balance. To begin with, doubts remain as to whether the management of working hours in medical facilities and occupational health systems in places including businesses have thus far been properly planned and operated.

The working patterns of physicians vary according to the positioning and functions of each healthcare facility in each region. Specifically, we are proposing a series of solutions such as healthcare for physicians, intervals between shifts, and regulations regarding continuous work which are currently under discussion. In the future, we also hope to consider either task shifting among the staff in medical professions or medical facilities, or perhaps task sharing among physicians, in order to shorten working hours.

Although work-style reform for physicians is often viewed as an independently discussed issue, it is, in fact, a fundamental issue that bears significant impact on the healthcare delivery system and the quality of care. It is also an issue of great concern in relation to each and every goal for 2025, including the realization of the Regional Medical Care Visions as well as the elimination of physician maldistribution.

ー”Society 5.0″ in the field of healthcare
Promoting a transition to ICT in the field of healthcare has been previously discussed. Key elements raised have included “the visualization of medical data,” “the development of PDCA cycles,” and “the introduction/utilization of ICT and AI.” We are currently at the stage of examining the practical aspects and will begin by focusing on system design. There are many issues to be discussed, such as the positioning of management, data sources, who will perform data entry/storage/utilization and with what authority, as well as issues surrounding maintenance and its associated costs in relation to ensuring a sustainable system. To deepen common understanding, discussions must also be held on issues such as for whom the system is built, for what purposes it will be utilized, and who will assume its accompanying risks and to what extent.

ーLooking ahead toward 2040
The MHLW is currently considering a future vision for the social security system in view of 2040. After 2025, Japan will face a period of declines in the working-age population, after having seen a period of growth among the elderly population. That said, with healthy life expectancy on the rise, there will be an increase in the number of healthy older individuals. In light of the circumstances, we need give consideration to future visions of Japanese society.

Further increases in healthy life expectancy and various developments in terms of participation in employment and society will decrease social security needs such as the need for healthcare/nursing care/livelihood support services, but this alone will not result in a sustainable social security system. Efforts must also be made to improve the productivity of each and every individual engaged in health and welfare services. While discussions on policy matters and reviews of the pros and cons are certainly unavoidable, in view of 2040, we would like to make additional efforts on measures to address new situations such as the shrinking working-age population. 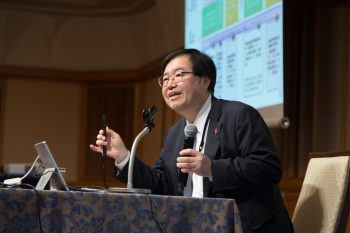 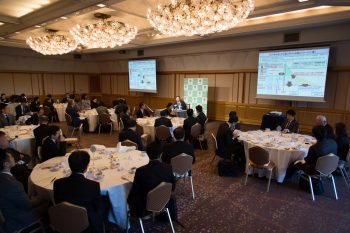