[Event Report] The First NCD Alliance Japan Seminar for People Living with Non-communicable Diseases – The Significance of Reflecting the Voices of Patients and Other Healthcare Beneficiaries in Policy (December 7, 2021) 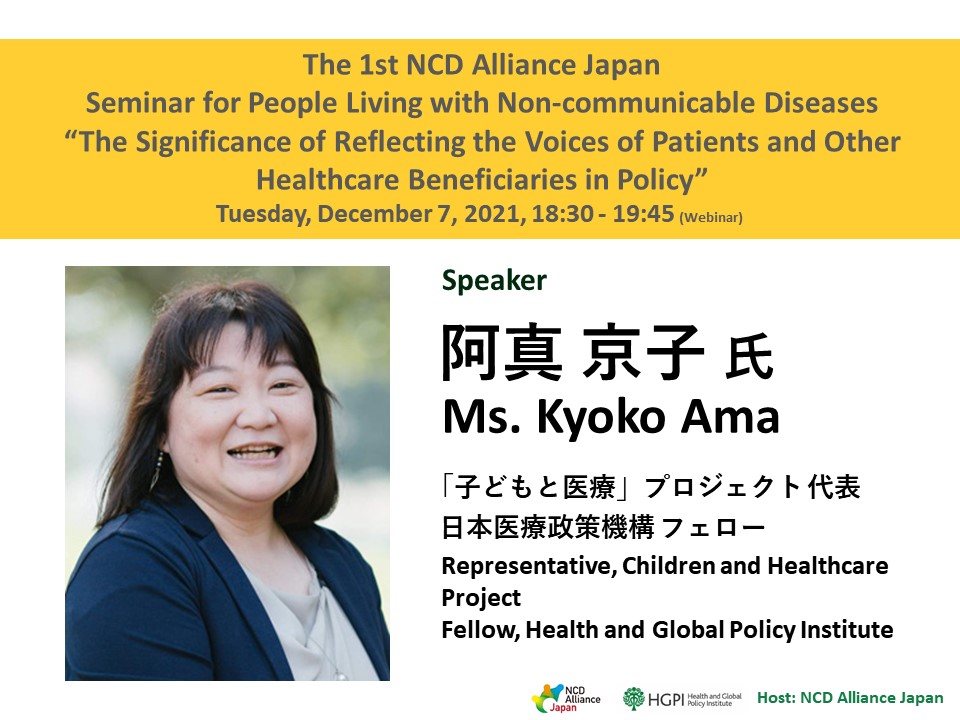 On December 7, 2021, NCD Alliance Japan (Secretariat: Health and Global Policy Institute (HGPI)) hosted its first seminar for patients and other interested parties titled, “The Significance of Reflecting the Voices of Patients and Other Healthcare Beneficiaries in Policy.” At the seminar, representative of the Children and Healthcare Project Ms. Kyoko Ama gave a lecture on the significance of patient involvement, specific ways patients can get involved, and good examples of involvement. To help accumulate useful knowledge and know-how for patients and other affected parties who want to take part in policy making in the future, a video of the lecture has been made available. (Please note that the video features excerpts from the main part of the seminar only.)

My child once had to go to the emergency room. They were safe in the end, thanks to our good fortune, but they may have suffered something permanent had we been unlucky. I was an anxious parent who did not know much about healthcare. So, I decided to help others overcome the same feelings by helping them learn about healthcare, which led to the launch of an association called “Shiro! Shoni Iryo Mamoro! Kodomo-tachi” (“Let’s learn about pediatric medicine and protect the health of children”) in April 2007. In 2018, I began participating in the Ministry of Health, Labour and Welfare (MHLW) “Project for Promoting the Effective Use of Healthcare” as one of the people whose job was to help generate solutions. During my time there, I continuously emphasized that it is important for efforts to raise awareness of how to best use healthcare services to be led by local governments rather than by private initiatives. As a result of those efforts, model projects to build awareness toward the effective use of healthcare were launched in Shinjuku City, Yokohama City, and Okazaki City in February 2020, and “Shiro! Shoni Iryo Mamoro! Kodomo-tachi” was dissolved in April 2020. My current activities focus on issuing notices regarding the implementation of those projects to each municipality by the end of FY2021.

■ Ms. Ama’s past experiences as a committee member and patient advocate

Past experience on committees

Topics Ms. Ama has discussed in past activities

■ Points of focus for patient advocates and Ms. Ama’s impressions

Do not give up trying to communicate

Generalize your personal experiences to engage in constructive opinion exchanges

When taking action, do so in a manner that cuts across fields of disease by listening to the stories of the affected parties while keeping in mind that you are not their representative

18:35 – 19:15: Lecture: “The Significance of Reflecting the Voices of Patients and Other Healthcare Beneficiaries in Policy”
Kyoko Ama (Representative, Children and Healthcare Project)

Ms. Kyoko Ama (Representative, Children and Healthcare Project / Fellow, Health and Global Policy Institute)
Ms. Kyoko Ama was born in Tokyo in 1974. After graduating from a junior college in Tokyo, she completed a Japanese language teacher training course and worked as a Japanese language teacher at Universiti Malaysia Sarawak. After returning to Japan, she joined the SOCIETY for Promotion of Japanese Diplomacy, an auxiliary organization of the Japanese Ministry of Foreign Affairs. There, she was involved in activities related to international exchange and cooperation. She then began operating a restaurant with her husband. In April 2007, Ms. Ama established “Shiro! Shoni Iryo Mamoro! Kodomo-tachi” association with the goal of improving the state of care for infants and young children by disseminating information on child and infant care to parents and guardians. The association became a general incorporated association called “Shiro Shoni Iryo Mamoro Kodomo-tachi” in July 2012. It conducted 160 lectures to over 6,000 parents and guardians of infants and young children and began giving corporate seminars and lectures on parenting at OB-GYNs in 2018. It was dissolved on April 30, 2020. Ms. Ama also teaches childcare and childrearing as a part-time lecturer in a non-degree graduate program on early childhood education at Tokyo Rissho Junior College. She is the mother of three children.

Her other positions include Member, Roundtable on Promoting the Effective Use of Healthcare, Ministry of Health, Labour and Welfare (MHLW); Member, Study Group on the Ideal Healthcare System for Emergencies and Disasters, MHLW; Member, Study Group on Emergency Medical Services, Fire and Disaster Management Agency, Ministry of Internal Affairs and Communications (MIC); Member, Advisory Committee on Emergency Medical Services, Tokyo Fire Department; Member, Council on Pediatric Care, Tokyo Metropolitan Government; and Member, Council for Promoting Public Awareness for Antimicrobial Resistance (AMR) Countermeasures, Cabinet Secretariat. In addition to serving on many committees in the past.