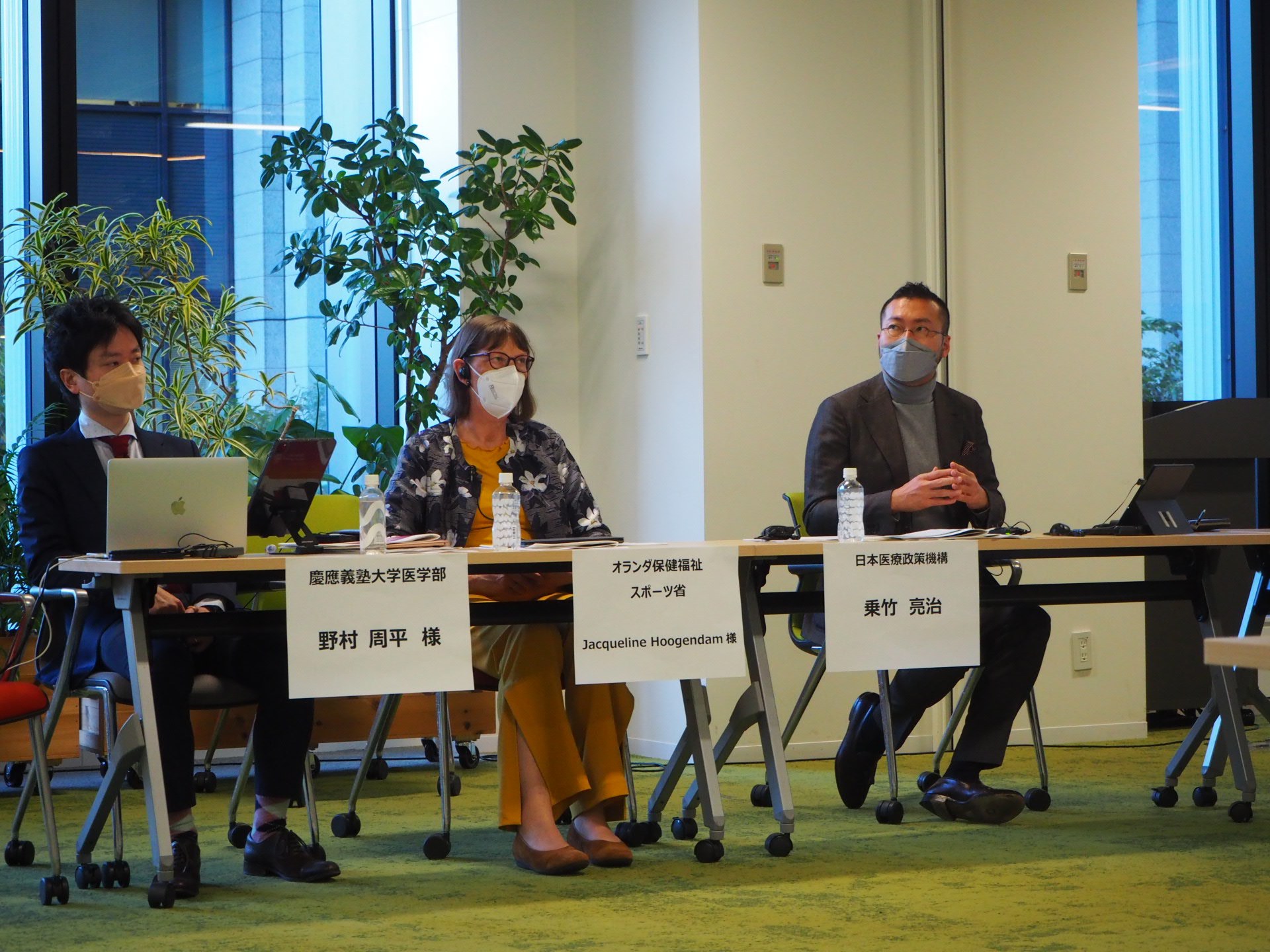 On Monday, October 31, Health and Global Policy Institute (HGPI) hosted “The First Media Seminar and Workshop for Promoting Healthcare Reform: Understanding Circumstances and Issues in the Domestic Health Sector Today.” At a symposium held in May 2022 under the title, “Creating a Health System to Withstand Future Crises: Next Steps Toward Enhancing Sustainability and Resilience,” the discussion mentioned that digitalization will become a pillar of Japanese healthcare in the future. With a view toward the digital transformation (DX) of healthcare in the future, this seminar and workshop was held to help the public correctly understand the nature of Japan’s current health and social security systems through an opinion exchange session with experts and representatives of the media.

At this event, which was our first media seminar and workshop, we reviewed progress in healthcare DX in the Netherlands and examined the current state of similar developments in Japan. Regarding the domestic situation, Professor Shuhei Nomura (Project Associate Professor, Department of Health Policy and Management, School of Medicine, Keio University) gave a lecture titled “Health in Japan Today and the Potential of Healthcare DX,” which examined how healthcare DX may transform people’s lives and how it can enhance preventive medicine and health promotion. Then, Mrs. Jacqueline Hoogendam (Ministry of Health, Welfare and Sport, The Netherlands) described the trajectory of healthcare DX and challenges that have been met in the Netherlands in a lecture titled, “Digital care in long-term care in the Netherlands.” Mrs. Hoogendam spoke about the process of building an integrated platform for information-sharing through Dutch legislation and the importance of implementing eHealth to transform the environment to match the changing needs of a new generation of elderly people.

In the future, we plan to crystallize discussion points from this symposium and compile reference materials which will be presented at a later date.

(2) Digital care in long-term care in the Netherlands
Jacqueline Hoogendam (Ministry of Health, Welfare and Sport, The Netherlands)

Shuhei Nomura (Project Associate Professor, Department of Health Policy and Management, School of Medicine, Keio University)
Professor Shuhei Nomura was born in Kanagawa Prefecture in 1988. In 2011, he graduated from the School of Pharmaceutical Sciences at the University of Tokyo, where he then earned a Master of International Health degree in 2013. After completing internships at the United Nations Development Programme (UNDP) Tajikistan office and the World Health Organization (WHO) Headquarters in Geneva, he completed a Doctor of Philosophy degree in epidemiology and biostatistics at the Imperial College London School of Public Health in 2016. Later that year, he was appointed Assistant Professor at the Department of Global Health Policy of the University of Tokyo Graduate School of Medicine, where he has served as Part-time Assistant Professor since 2019. In 2019, he was also appointed Project Associate Professor of the Department of Health Policy and Management at the Keio University School of Medicine. He is currently collaborating with the Institute for Health Metrics and Evaluation (IHME) at the University of Washington in the Global Burden of Disease study, with Japan as a focal point. He has served as a consultant for the Bill & Melinda Gates Foundation Japan office since 2018 and a consultant for SEEK Development, a consulting group on international health policy based in Germany, since 2019. In 2021, he was appointed to the expert panel of the Global Nutrition Report, which conducts follow-ups and assessments of Nutrition for Growth Summit commitments. In 2022, he was appointed to the G7 Global Health Task Force, which will examine the international health agenda for the G7 Summit Hiroshima, which Japan will host in 2023. His areas of expertise are international health policy and diplomacy, burden of disease, disaster and health risk management, and nutrition science.

Jacqueline Hoogendam (Ministry of Health, Welfare and Sport, The Netherlands)
Jacqueline Hoogendam started her professional career as a lawyer in the private sector. In 1994 she switched to the Dutch government, the Ministry of Justice, with specific tasks on crime prevention and business ethics. In 2007, she was offered a position at the Ministry of Health, Welfare and Sport. At the Department of Long-term Care she became responsible for the policy on dementia.

Currently, Jacqueline is co-ordinator of international dementia policy and of dementia research, both on a national and international level. She also acts as co-ordinator of international affairs in long-term care. As part of this position, Jacqueline represents The Netherlands’ government in the both Management Board and the Executive Board, as vice-chair, of the EU Joint Programme Neurodegenerative Disease Research (JPND), in the World Dementia Council, in the European Group of Governmental Experts on Dementia, in the UNECE Standing Working Group on Ageing and in the General Assembly of the Active and Assisted Living Research and Development Programme (AAL).

[Event Report] Future of the Healthcare System Project Symposium- Creating a Health System to Withstand Future Crises: Next Steps Toward Enhancing Sustainability and Resilience (May 17, 2022)