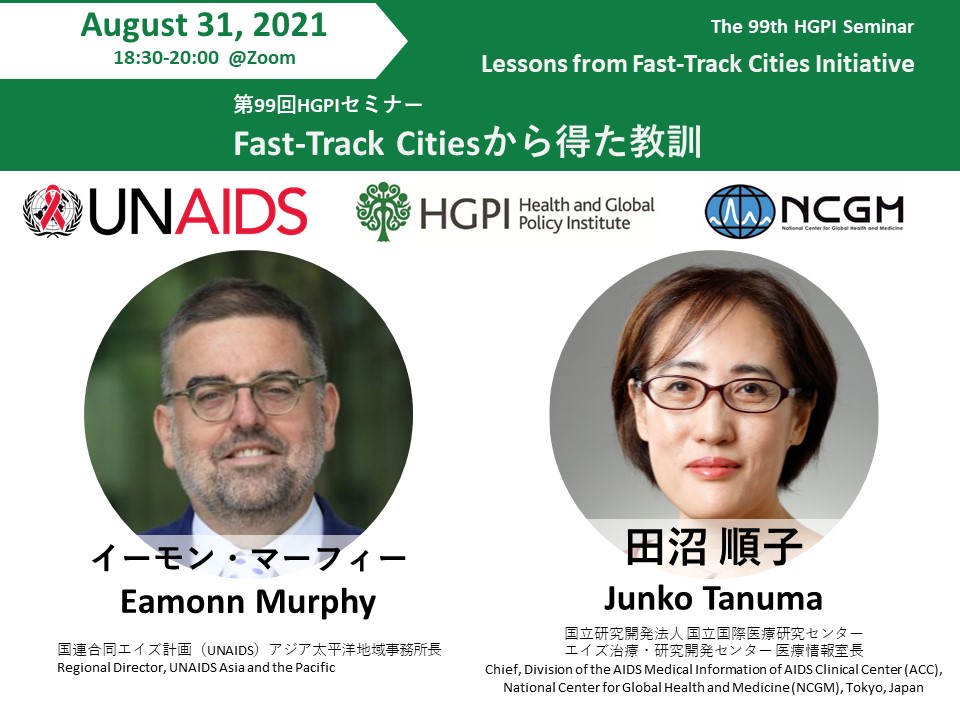 Key Points from the Lecture

Since 2000, the number of people receiving antiretroviral therapies for HIV has continuously increased, while AIDS-related deaths have decreased. Nevertheless, in 2020, there were about 37.6 million people living with HIV and 690,000 deaths. Asia and the Pacific has the second highest number of adults and children living with HIV and new infections in the world. There is still a lot of progress to be made, especially in the areas of treatment and viral suppression.

The Global Strategy on AIDS, 2021-2026 established a series of ambitious targets and commitments for 2025. Specifically, when it comes to Asia and the Pacific, there must be efforts to modernize HIV service delivery, including expanding access to PrEP[1], self-testing, multi-month dispensing of therapeutics, and the use of virtual spaces. Moreover, it is essential to eliminate barriers to equitable service coverage among marginalized communities.

Cities are at the center of ending the AIDS epidemic. In fact, two hundred cities are home to 25% of People Living with HIV (PLWH) and transmission risk is often higher in urban centers. That being said, cities are also uniquely equipped with the resources needed to address the epidemic—financial resources, better health systems, and regulatory powers among others.

The Fast-track Cities Initiative was launched in December 2014 and now includes over 350 cities and municipalities. The initiative aims to provide cities with support to fast-track their HIV responses and deliver on the commitments of the Paris Declaration.

To date, Fast-track Cities has brought together stakeholders at regional and international meetings to collaborate on HIV responses. These experiences have then been presented at several conferences to further share key lessons learned. Moreover, cities are making progress towards reaching the 90-90-90 goal[2], and more resources have been mobilized to support high-burdened cities accelerate their HIV responses.

UNAIDS greatly values Japan’s partnership on shared priorities and its continued commitment to ending AIDS as a public health threat by 2030. Japan has committed funding to UNAIDS and has previously seconded 2 officials from the Japanese Ministry of Health, Labour and Welfare to work at UNAIDS. In addition, UNAIDS has Memoranda of Understanding with the following Japanese institutions: HGPI, NCGM, St. Luke’s International University, and Pride House Tokyo.

■ The Path to End AIDS in Japan

The annual number of new HIV notifications in Japan has been gradually decreasing since 2016, and several Japanese organizations have facilitated the involvement of PLWH and continue to promote prevention and testing. At the same time, there are several challenges to overcome in the areas of prevention, testing, treatment, and monitoring.

From a prevention perspective, sexual health education and promotion in Japan remains inadequate. Moreover, despite an increase in online purchases of TDF/FTC[3] for PrEP, no medicine has been officially approved for HIV prevention in Japan. This has led to off-label use without sufficient medical care. Other challenges such as a need for expanded testing and counselling, delays in commencing treatments such as antiretroviral therapy (ART), the establishment of effective monitoring systems, and collaboration between fragmented programs were also identified.

There are three lessons that Japan could learn from London’s efforts to end the AIDS epidemic: (1) team-building and solidarity, (2) science- and needs-based interventions, and (3) effective communication with the public. London galvanized an inclusive, comprehensive group of stakeholders and secured funding from all 32 London boroughs to implement HIV prevention activities and interventions. These include public HIV testing sites that are approachable and welcoming, as well as sexual health clinics designed to empower locals. Moreover, the initiatives are all driven by evidence and curated for those in need. Finally, the city introduced the “Do It London” campaign to normalize testing for HIV. These efforts have led to a 37% decrease in new HIV diagnoses since 2015.

Globally, the COVID-19 pandemic has had a serious impact on HIV/AIDS programs. Some estimates suggest that the pandemic could threaten the past 10 years of progress in certain regions. In Japan, there has been a decrease in the number of HIV tests conducted since the beginning of the pandemic due to service disruptions at testing centers.

However, there are many lessons that could be taken from the fight against AIDS and applied to the COVID-19 pandemic such as the importance of community-based health initiatives, building trust, and equitable access to testing and therapeutics. Decades of investments in community health around the world as part of HIV/AIDS programming has enabled communities to respond better to COVID-19.

[1] PrEP (pre-exposure prophylaxis) is medicine people at risk for HIV take to prevent getting HIV from sex or injection drug use. When taken as prescribed, PrEP is highly effective for preventing HIV (United States Centers for Disease Control and Prevention).
[2] The 90-90-90 treatment target aims to ensure that 90% of all people living with HIV know their HIV status, 90% of all people with diagnosed HIV infection receive sustained antiretroviral therapy, and 90% of all people receiving antiretroviral therapy have viral suppression (UNAIDS).
[3] Tenofovir disoproxil fumarate (TDF)/emtricitabine (FTC) is a fixed-dose combination tablet that was approved by the U.S. Food and Drug Administration (FDA) for use as PrEP for adults in 2012 (United States Centers for Disease Control and Prevention).

Mr. Eamonn Murphy (Regional Director, UNAIDS Asia and the Pacific)
As Regional Director, UNAIDS Asia and the Pacific, Eamonn Murphy supports countries across the region in achieving the goals outlined in the 2016 United Nations Political Declaration on Ending AIDS. He leads and facilitates a joint United Nations response to support countries and their HIV programmes, which includes strengthening the links between governments, civil society, the United Nations system and development partners. Mr. Murphy was previously the UNAIDS Country Director in Myanmar, where he supported Myanmar’s significant scale-up of services and helped to create an enabling environment and overcome legislative obstacles. Prior to that, he served in Viet Nam as UNAIDS Country Director, where he was honoured with the Order of Friendship by the President in 2010, UNAIDS headquarters as Director of Governance, United Nations System and Donor Relations, and as the UNAIDS Country Coordinator in Myanmar. Before joining the United Nations, Mr. Murphy held a number of senior positions with the Australian Government, including Director for Health Sectors with AusAID in the Foreign Ministry, as well as Assistant Secretary for Communicable Diseases and Environmental Health and Director of the National AIDS Programme for the Commonwealth Health Department. Mr. Murphy has a Masters of Health (Merit) from the University of Sydney and a Bachelor of Education from the Australian Catholic University.

Dr. Junko Tanuma (Chief, Division of the AIDS Medical Information of AIDS Clinical Center (ACC), National Center for Global Health and Medicine (NCGM), Tokyo, Japan)
Dr. Junko Tanuma is the Chief of Division of the AIDS Medical Information at AIDS Clinical Center in National Center for Global Health and Medicine (NCGM) in Tokyo. She has a broad background as an infectious disease physician with specific training and expertise in the field of HIV/AIDS. She graduated from School of Medicine in Tohoku University (1997) and completed residency and fellowship in Infectious Diseases at NCGM. She earned her PhD from Graduate School of Medicine in Tohoku University in 2011 for the study on HIV in Vietnam. She was in the Takemi fellowship at Harvard T.H. Chan School of Public Health in 2014-2016. She is currently a member of the committees of STI/HIV control and the AIDS surveillance of Ministry of Health Labour and Welfare (MHLW), and working as a Japan’s country rapporteur of UNAIDS Global AIDS Monitoring. She has been engaged in a variety of research projects related to HIV/AIDS, including those under international collaboration with over 12 countries in Asia-Pacific. She is now serving as the primary investigator of the Sexual Health Research Programs supported by the MHLW, where her team conducts various sexual health promotion programs in multiple languages to raise public awareness on the global response under Fast-track commitments to end AIDS by 2030.