[Event Report] The 101st HGPI Seminar Looking Back at the History of Infectious Diseases to Think About the Future of AMR Countermeasures – A Seminar in Commemoration of AMR Awareness Month (November 24, 2021) 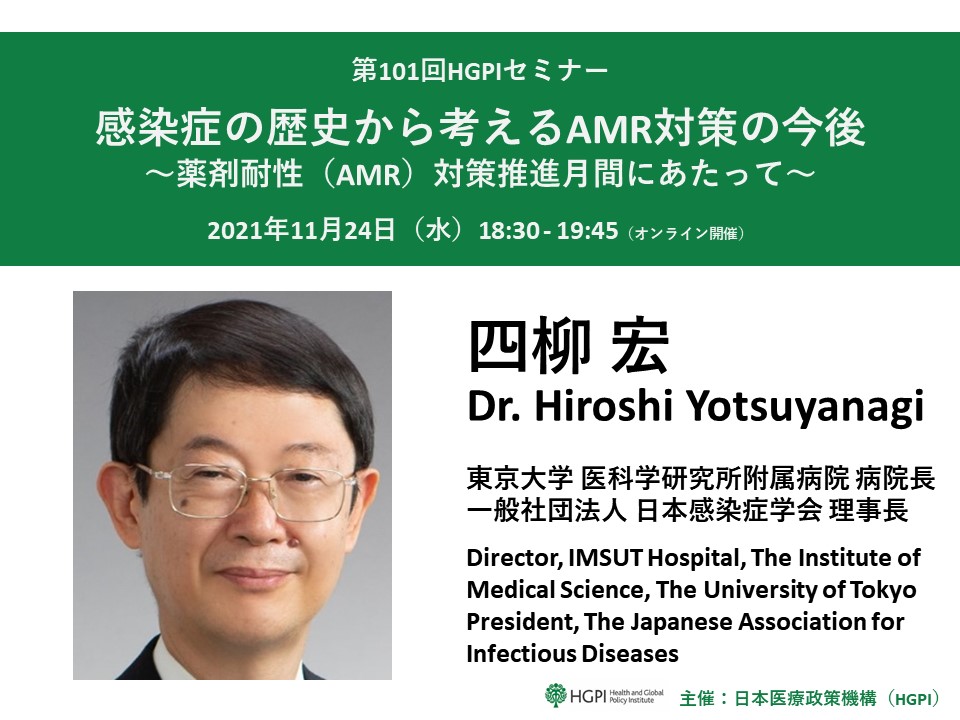 For the 101st HGPI Seminar, Health and Global Policy Institute (HGPI) hosted Dr. Hiroshi Yotsuyanagi, the Director of IMUST Hospital, the Institute of Medical Science, the University of Tokyo and the President of the Japanese Association for Infectious Diseases, to discuss the history of infectious diseases and the outlook for future antimicrobial resistance (AMR) countermeasures. This seminar was held in commemoration of “World Antimicrobial Awareness Week” organized by the World Health Organization (WHO) and “Antimicrobial Resistance (AMR) Awareness Month” organized by the Cabinet Secretariat.

To prevent the potential spread of COVID-19, this seminar was held online.

■ Microorganisms in the human body

Throughout the human body, there are vast numbers of microorganisms which can be found in places like the inside of the nose, mouth, and intestines or on the surface of the skin. In particular, an overwhelmingly large number of bacteria can be found in the intestines. These groups of bacteria are called microbiomes and they do not normally make people sick. However, they can cause diseases if they happen to enter the body or bloodstream through cuts or tears in the skin or in the membranes lining the nose, mouth, or intestines.

■ The history of antimicrobial development and the emergence of AMR bacteria

Penicillin was discovered by Fleming in 1928 and was the first antimicrobial ever developed. While researching ways to treat bacterial infections, he found staphylococci bacteria had been eliminated around a fungus growing on a neglected culture plate. The discovery of penicillin has saved many lives.

One variety of bacteria that has acquired antimicrobial resistance is MRSA. MRSA occurs when a unique protein is introduced to the genes of the bacteria Staphylococcus aureus. Staphylococcus aureus is highly infectious and easily attaches itself to mucous membranes, so if it is present on the membrane of the nasal cavity and is touched, it can be transmitted to other people.

Although the prevalence of MRSA among strains of Staphylococcus aureus is on a downward trend, it still accounts for approximately 50% of all strains. In 2019, it was found that bacteremia caused by MRSA and other AMR bacteria is the cause of approximately 8,000 deaths annually in Japan. Furthermore, in 2021, the domestic disease burden of MRSA alone was 3.6 times that of Europe. Starting with MRSA, further steps must be taken to reduce the number of AMR bacteria even more.

E. coli is the most common aerobic symbiotic bacteria in the large intestine. Although it rarely causes infectious diseases, it can do so if it enters sterile parts of the body. For example, it can enter the urinary tract from the anus. Due to physiology, women are at greater risk for such infections and are more prone to cystitis. When E. coli develops resistance to antimicrobials, it tends to become more difficult to treat. Furthermore, certain strains (such as O157) which are only carried by cattle or other animals can cause severe and even fatal infections should they infect people.

Genes cause E. coli to develop resistance. When a bacterium carrying an AMR gene undergoes repeated cell division, the plasmid is transmitted to other microorganisms or bacteria, producing new AMR bacteria. A prominent example of an AMR gene is the one that produces Extended-Spectrum β-lactamase (ESBL). Bacteria with the ESBL gene can break the beta-lactam rings of penicillins and cephalosporins, rendering them ineffective.

Developed countries are facing problems due to Carbapenem-Resistant Enterobacteriaceae (CRE). Carbapenems are a class of antimicrobial that are considered the last line of defense for treating various infectious diseases.

No antimicrobial is effective on all bacteria in the body. This means that when an antimicrobial is used for a long period of time, bacteria which resist that antimicrobial remain in the body and replicate. When the compositional balance of groups of bacteria (called bacterial flora) located in the intestines or other parts of the body have been upset, it is called dysbiosis. Dysbiosis can cause various diseases. For example, dysbiosis can lead to inflammatory bowel diseases, such as ulcerative colitis; cancers, like colon cancer; and metabolic diseases, like obesity, diabetes, and fatty liver. In addition to these, dysbiosis can also cause disorders which may seem unrelated to the gastrointestinal tract. These include autoimmune diseases like rheumatism and neurological disorders like autism and Parkinson’s disease. Furthermore, large numbers of lymphocytes are located in the intestine, so dysbiosis can even cause immune system abnormalities. These relationships form what is called the “gut-brain axis” and demonstrate how the gut and nervous system are closely connected.

We must also pay careful attention to strains of E. coli that are only carried by cattle and other animals. If a piece of meat containing AMR bacteria is not treated properly and is consumed, those bacteria may be transmitted into the body as a result. There have been cases in which AMR bacteria passed from meat to the intestines of pregnant women with weakened immune systems, infecting their unborn children as a result. It is now common practice to test for AMR bacteria when pregnant women are admitted to healthcare institutions.

Compared to other countries, people in Japan can receive medical consultations at healthcare institutions relatively quickly and at will. In terms of keeping people healthy, this is an excellent system. However, in such an environment, patients can easily request antibiotics from healthcare providers, and healthcare providers can easily prescribe them. This situation is not ideal. Healthcare institutions must control AMR through proper testing, using antimicrobials appropriately, and similar efforts. The basic methods of AMR control in the home are disinfecting around toilet seats and washing hands thoroughly after using restrooms.

■ The need for global AMR countermeasures

Other important elements for preventing the occurrence of AMR bacteria are monitoring systems and global perspectives. AMR bacteria can spread due to various reasons including human migration and the import or export of animals and other livestock. Many antimicrobials are used on animals including tetracyclines, macrolides, penicillins, and fluoroquinolones, enabling bacteria to build resistance. For example, numerous E. coli strains resistant to penicillins, cephems, and fluoroquinolones can be found in poultry. Staphylococcus aureus and E. coli are the most common causes of fatal bloodstream infections in people, respectively. The number of fatal bloodstream infections caused by E. coli is on the rise should be closely monitored.

To closely monitor current situations and status of AMR bacteria, Japan established a cloud platform called Japan Surveillance for Infection Prevention and Healthcare Epidemiology (J-SIPHE), which can be used to share information among regions and medical institutions, like test status, and to enable collaboration on infection control. Recognizing AMR as an extremely important issue, in 2015, the World Health Organization (WHO) developed the Global action plan on antimicrobial resistance and established a surveillance system called Global Antimicrobial Resistance and Use Surveillance System (GLASS). Using GLASS, researchers found that low- and middle-income countries have higher proportions of infections caused by MRSA than high-income countries. This disparity was even greater for bloodstream infections caused by third-generation cephalosporin-resistant E. coli. Meanwhile, the use of expensive carbapenems in high-income countries is causing problems due to CRE infections.

Considering the above, it is clear from a global perspective as well that more work must be done to reduce oral antimicrobial usage and to prevent meat contamination resulting from inappropriate antimicrobial use in livestock.

To help prevent AMR, the WHO has designated November 18th to November 24th (the day of this lecture) as World Antimicrobial Awareness Week (WAAW) . The AMR Clinical Reference Center also works to build awareness toward the importance of AMR control, particularly in November, which is “Antimicrobial Resistance (AMR) Awareness Month.” They have been working to build interest among children and adults while providing information in newsletters for elementary school students and similar sources. For example, this year’s campaign includes a collaboration with the anime series “Cells at Work.”

It is estimated that 700,000 people die globally each year due to AMR. Recognizing the need to take action now, efforts to combat AMR are advancing in Japan and around the world. However, in a public awareness survey conducted among 700 people in Japan, about 60% of respondents did not know that antimicrobials and antibiotics are ineffective against viruses compared to only 18% who did. Furthermore, about 60% of respondents who did know about AMR bacteria said they were not taking any AMR countermeasures.

It is my hope that everyone thinks about why the WHO and the Government of Japan are engaging in a large-scale campaign to combat AMR as well as what actions they should take.

< [Event Report] The 102nd HGPI Seminar – Examining Child and Household Poverty From the Perspective of Food Security as Highlighted by the COVID-19 Pandemic (December 3, 2021)