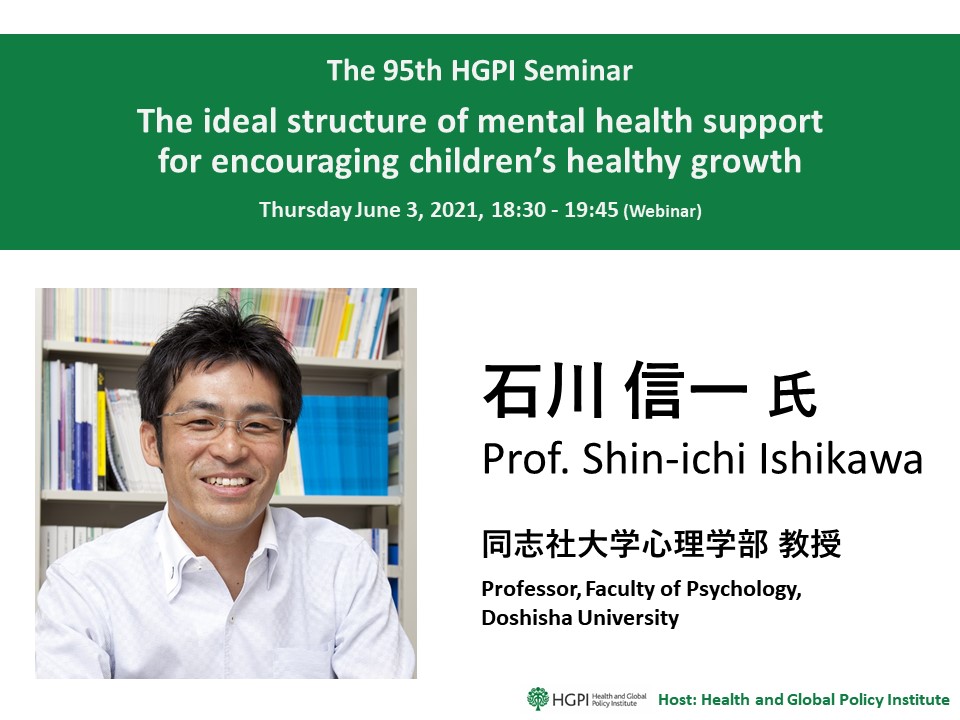 For the 95th HGPI Seminar, we hosted Professor Shin-ichi Ishikawa of Doshisha University’s Faculty of Psychology. He discussed the current state of children’s mental health care in Japan, the effects of the Coronavirus Disease 2019 (COVID-19) pandemic, and his current efforts conducting practical studies on prevention programs for children’s mental health that utilize concepts from cognitive behavioral therapy (CBT).

■ The Relationship Between Student Guidance Issues at Schools and Children’s Mental Health
Cases are on the rise of student guidance-related problems in schools such as absenteeism, violence, and bullying. According to the Ministry of Education, Culture, Sports, Science and Technology (MEXT) “FY2019 Survey on Problematic Behavior, Absenteeism, and Other Issues Related to Student Guidance among School Children,” there were 78,787 cases of violence in elementary, junior, and senior high schools (in FY2018, there were 72,940 violent incidents). The number of such cases has increased four years in a row, especially among students in elementary schools, and new records continue to be set annually. New records were also set for bullying and absenteeism in FY2019, when there were 612,496 recognized cases of bullying (compared to 543,933 cases in FY2018). The number of absentee students in elementary and junior high schools was 181,272 students (compared to 164,528 cases of absenteeism in FY2018). Although various measures to address these issues have been attempted in the past, it is hard to say that the situation has improved for problems in schools.

Mental health problems among children are a background issue that is related to this increase. For example, the most common reasons for absenteeism are feelings of anxiety or apathy among children. This trend has not changed in the past decade.

Next, we will examine how many children are experiencing problems related to mental health. According to data presented by the World Health Organization (WHO) in 2001, it has been estimated that 10% to 20% of all children are affected by some form of mental health issue. There has also been a study that estimated 6.5% of children worldwide experience anxiety.

Various studies to gauge the prevalence of mental health issues among children have been conducted in Japan. A MEXT survey found that 6.3% of all students show signs of serious learning or behavioral difficulties. A study by Miyazaki University estimated that 4.9% of first- and second-year students in junior high have depression. However, a large-scale study that answers the question, “How many children in Japan are living with mental health problems?” has not been conducted, so we do not have a clear grasp of the situation. Moving forward, steps must be taken to establish data that enables us to accurately understand the situation.

■ Mental Health During the COVID-19 Pandemic
The COVID-19 pandemic is having significant effects on mental health problems. A meta-analytic study on the prevalence of mental health issues related to COVID-19 from January to March 2020 found that among approximately 220,000 people, more than 30% were experiencing depression (31.4%), anxiety (31.9%), or insomnia (37.9%). This study also analyzed research papers on various sample groups including healthcare providers and people with COVID-19 in other countries and found no significant bias in prevalence among sample groups.

In Japan, a research team from Tokushima University conducted an online survey on mental health. Approximately 36% of survey respondents reported mild to moderate psychological distress. The team also found that psychological distress tended to be higher among younger groups, women, and healthcare workers.

■ The Effectiveness of Cognitive Behavior Therapy for Meeting the Mental Health Care Needs of Children and Current Issues
Evidence demonstrating the effectiveness of CBT for mental health problems is becoming more established. CBT has been shown to be highly effective at treating various mental health problems affecting children including anxiety, obsessive-compulsive disorder, and drug dependence, and many such studies have been conducted in Japan. However, the quality and quantity of evidence varies among mental health problems and symptoms. There are more papers on preventive interventions using CBT for groups without specific problems than on CBT’s effectiveness for treating anxiety, depression, or aggressive behavior, and further developments are anticipated. Moving forward, it will not only be necessary to build evidence for CBT in these fields, it will also be necessary to introduce and expand preventive interventions using approaches based on CBT in fields where a certain amount of evidence has already been established, particularly in schools.

■ The Concept of Preventive Mental Health Care and the Importance of School Education
In response to the COVID-19 pandemic, efforts in the U.K. and other countries and international trends in efforts for the Sustainable Development Goals (SDGs)[2] show a growing demand for education on preventive mental health care from society and for preventive education to be provided in schools. The WHO has also stated that schools play a key role in promoting the social and emotional development of children and has emphasized the importance of school education in children’s mental health.

While describing the concept of preventive mental health care, we will refer to the following illustration. 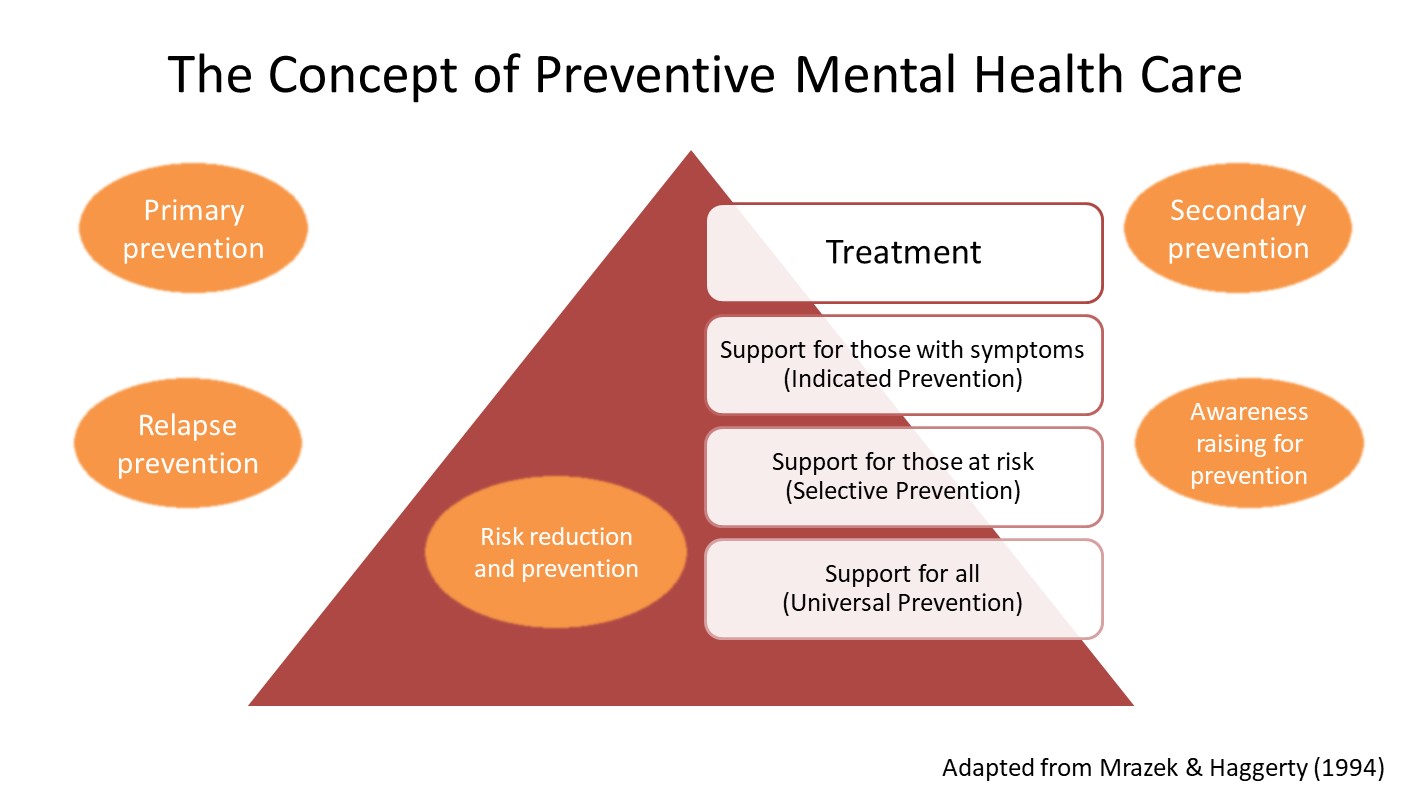 As shown in the upper portion of the pyramid in Figure 1, those at high risk require intensive interventions and treatment from specialists. However, providing “Universal Prevention” that reaches every individual and group is also extremely important in preventive mental health care. From that perspective, preventive interventions in schools, particularly during compulsory education, mean that everyone can be approached. This contributes greatly to preventing mental health issues.

Efforts for prevention take various forms such as primary prevention, relapse prevention, prevention of secondary issues that can trigger mental health problems, and awareness raising for prevention. Among them, “risk reduction and prevention” is particularly important. Risk reduction and prevention is a concept which emphasizes eliminating risk factors for psychological problems identified through previous studies to the greatest extent possible. In addition to genetic and biological factors, depending on the stage of development of the person in question, risk factors can also include family, social, and school factors. Our research team is conducting a program mostly in schools that focuses on children’s social skills and social factors. By conducting our program in schools, we can learn about children’s perception or cognition and how they deal with stress. At the same time, we can also examine social factors such as how the children are forming relationships with each other.

■ The Development of Kokoro Up Time as a Practical Study
Based on these concepts, our research team has been researching school preventive mental health care programs since 2000. Our main efforts are shown in Figure 2. 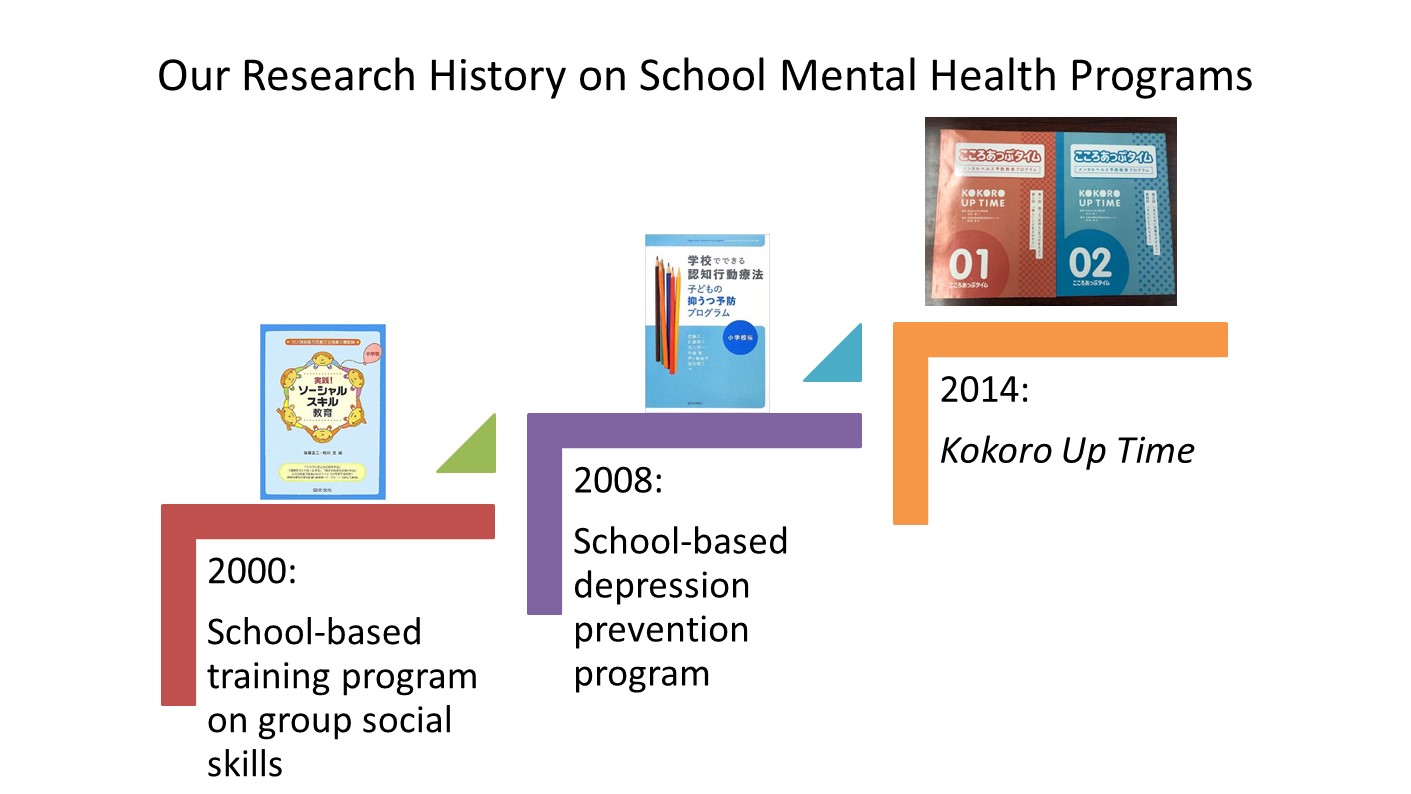 We have been developing the Kokoro Up Time (“Mental Health Improvement Time”) program since 2014. Research for this program is currently being advanced in the Solution Creation phase of the Solution-Driven Co-creative R&D Program for SDGs. This program was developed based on concepts from CBT and aims to improve mental resilience[3] for children and adolescents from preschool to high school. During development of the program, we attempted to make it more effective and easier to implement while following the Principle of User Centered Design by:

To examine the effects of the program, we conducted a single-arm pilot study with approximately 300 elementary students in grades four through six that found significant increases in general self-efficacy[4] three months after the program. Children and parents who completed the program also showed significant improvements in our Strengths and Difficulties Questionnaire (SDQ).[5] Teacher evaluations three months and six months after the program also showed improved social skills among the children.

We also developed an adolescent version of the preventive mental health care program for junior and senior high school students. To verify its effectiveness, we conducted two studies: one on students in the first year of junior high and one on students in the first and second years of high school. Our before-after study found a reduction in anxiety symptoms among the students. However, there are issues facing our efforts to verify the program’s effectiveness that remain to be addressed. For example, a control group has not yet been established.

To address these issues, we are currently advancing two studies at the city level. In the first study, the program will be conducted continuously for three years for approximately 2,100 students at 12 schools to verify that it is effective. In addition to assessing indicators such as anxiety, depression, and anger among the students as in our previous trial, we will also measure mental health literacy and stress levels among the teachers. We are also conducting a study on the effects of the program by implementing it in multiple schools at different times. By conducting comparative evaluations between the schools where the program is scheduled to be conducted and those where it has already been conducted, we think we can overcome the aforementioned lack of a control group and fully verify the program’s effectiveness.

■ Future Prospects
In the future, we would like to develop human resources, improve our training system, and verify the effectiveness of the program so that it can be implemented in elementary, junior high, and high schools throughout Japan. Later on, we would like to expand the scope of our activities to include the field of welfare in the program and to develop methods of providing it to Japanese people living overseas. As previously discussed, school education plays a crucial role in preventive mental health care as a form of universal prevention, in which all people are supported. By developing and implementing preventive mental health care programs in schools, we would like to contribute to improving mental resilience for the children who will lead our society in the future.

[1] Cognitive Behavioral Therapy (CBT): A form of psychotherapy based on the cognitive-behavioral model in which mood and behavior are influenced by perception (or cognition) and that aims to improve mood by changing thought and behavior patterns to ones that are healthier or that lead to problem-solving. CBT has been shown to be an effective method for treating and preventing the recurrence of various mental disorders such as depression, anxiety, and stress-related disorders. It is recommended as a standard form of treatment in domestic and international guidelines.

[2] The SDGs are international goals that aim to achieve a better, more sustainable world by 2030. They include 17 goals and 169 targets which can be found in the 2030 Agenda for Sustainable Development that was adopted by all United Nations Member States at the UN Summit in September, 2015. (For further information, please visit: https://www.mofa.go.jp/mofaj/gaiko/oda/sdgs/about/index.html)

[3] The ability to recover psychology and heal naturally in response to adversity.

[4] Refers to a person’s belief in their ability to perform the actions needed to produce a certain result.

[5] One indicator used to evaluate children’s mental health. It is characterized by its emphasis on children’s strengths in addition to the difficulties they face. It is widely used in the U.K. as well as in and other parts of Europe, such as Scandinavia and Germany. (https://www.mhlw.go.jp/bunya/kodomo/boshi-hoken07/h7_04a.html)

< [Event Report] The 96th HGPI Seminar – The Current Situation for Cognitive Behavioral Therapy (CBT) and Future Prospects for the Dissemination of CBT (July 1, 2021)