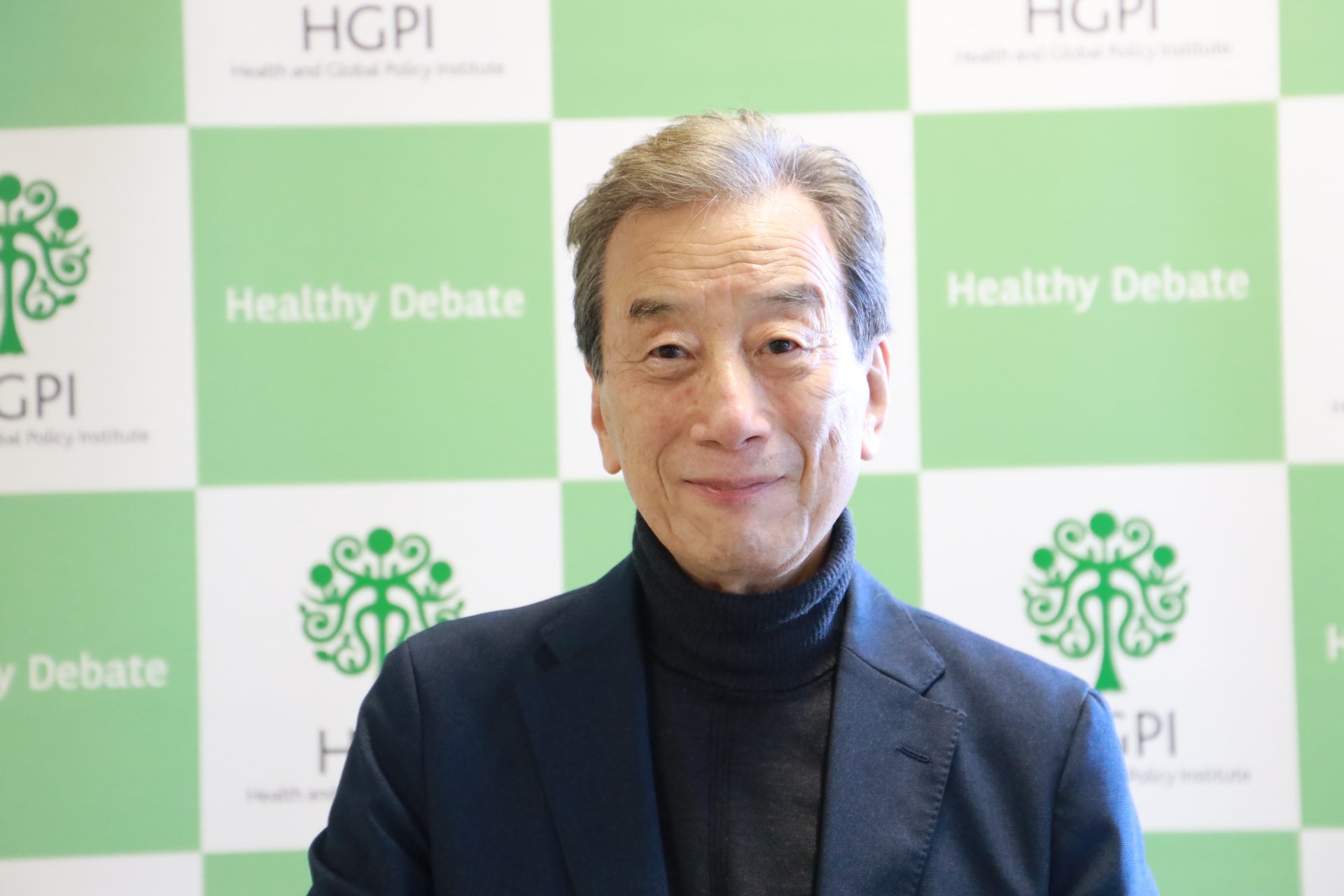 On January 21, 2022, Health and Global Policy Institute (HGPI) Chairman Dr. Kiyoshi Kurokawa gave his annual presentation. Its title was, “A New Vision for 2022.”

At this seminar, together with everyone in attendance, we took a look back on 2021, considered how the world will change in 2022, and discussed how each of us should approach those changes.


<Key points of the lecture>

■ Japan’s position in a changing world

While Japan experienced continuous economic growth after World War II, its GDP has not been growing in real terms over the past thirty years. As one result of the internet’s global popularization, which began in the 1990s, the focus of the economy is currently transitioning from manufacturing to digital technology. Although companies like Amazon and Apple in the U.S. and Alibaba in China are growing rapidly, Japan, which had previously achieved success in manufacturing or “monozukuri,” is now lagging behind.

China has achieved remarkable progress in recent years, but according to the Financial Times, even when compared to China, the U.S. has the highest presence globally. For example, in the QS World University Rankings, half of the top 20 universities are American, including the top four. The U.S. also leads in venture capital investments to an overwhelming degree. Compared to the U.S. and other countries, there is little venture capital investment activity in Japan, and it is rare to see new companies emerge. These factors are also contributing to the stagnation of Japan’s GDP.

Japan is also lagging behind in the field of academics. For example, looking at data presented by the Japan Science and Technology Agency (JST) on the international share of the top 10% of highly cited published academic papers , in 2000, Japan was in fourth place after the U.S., the U.K., and Germany. Japan’s position declined gradually and the country was in tenth place in 2018. Among factors that led to this decline, the low number of researchers and low investment in academic fields are often mentioned. However, looking at the number of researchers, despite the fact Germany has fewer researchers than Japan, Germany has only fallen one position to fourth place. This suggests a low number of researchers is an unlikely factor for decline. Next, if we examine investments in academic fields, the amount invested per researcher in Japan is comparable to the amounts invested in countries like Germany and France. Furthermore, despite the fact that investment per researcher is even lower in the U.K. compared to Japan, the U.K. has maintained its third-place position in the international share of the top 10% of highly-cited papers.

If the number of researchers and the amount invested in research are not reasons Japan is lagging behind in the academic field, why is Japan’s rank on the decline? I think one factor is that Japan’s vertically-structured society is reflected in the culture at domestic universities. To be more specific, in the U.S., it is common for researchers to build their careers at universities or organizations different from the university they graduated from. In Japan, on the other hand, many researchers stay at their alma mater to continue their research. For example, many University of Tokyo professors are University of Tokyo graduates. While some researchers set off for the U.S. or other destinations after earning their doctoral degree, many of these placements are for fixed periods, and even compared to countries like Taiwan or Korea, very few people go to serve at universities abroad after graduation. Nurturing the seeds of new research in such a rigid environment is difficult. Japan lagging behind in the academic field is not a problem for the Government to address; rather, it is a problem for universities and research communities. 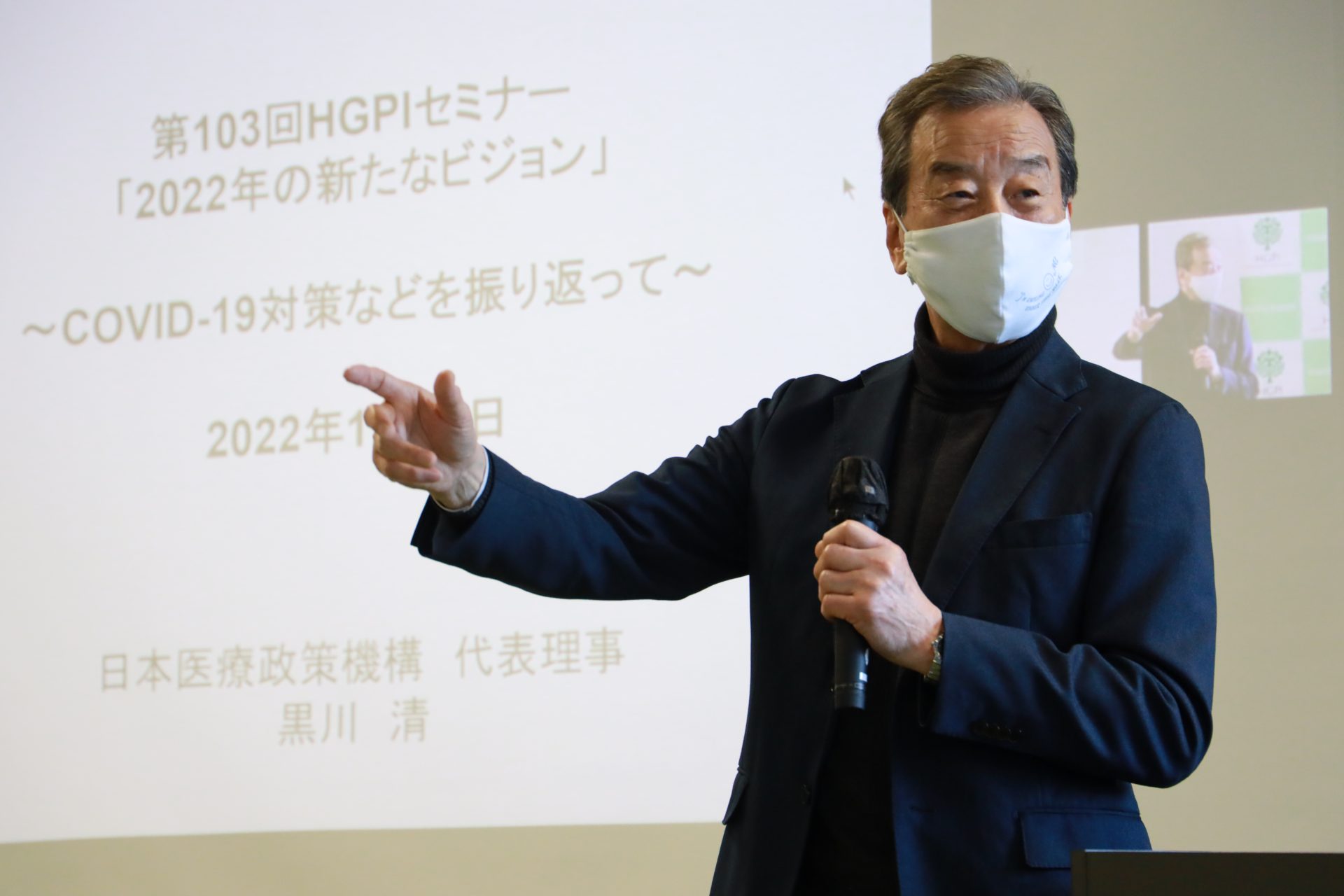 First, we must think about governance. At companies and universities in other countries, those in the top management positions are evaluated by third parties independent from their organization and are dismissed as necessary, but few organizations in Japan are operated with such healthy governance.

Second, we must also think about our dependency on adjusted standard deviation scores and career models that are contained within one company or organization. In Japan, many people build their entire career within the same organization and there is little movement of human resources among organizations. For example, someone working at a bank should be able to transfer to another bank if they have certain skills, but in reality, that almost never happens. This aspect of Japanese culture worked out well during the Meiji period or the period of rapid economic growth, but the world is undergoing great change through digital transformation and the advance of globalization. Japan must also change in accordance to global trends.

Based on these perspectives, I would like more people to go abroad, especially young people. Gaining exposure to and interacting with different cultures helps you understand the strengths, weaknesses, and unique characteristics of both Japan and yourself. When I was working in the U.S., there were many refugees after the end of the Vietnam War, but the Government of Japan refused to accept them. Seeing that event made me acutely aware of one of Japan’s weaknesses. Going out into the world, outside of Japan, and having such firsthand experiences helps foster a healthy sense of patriotism and enables you to be able to make decisions with a broader perspective.

In particular, I want to communicate the “Usefulness of Useless Knowledge” to young researchers in Japan. In the U.S., there is an institute called the Princeton Institute for Advanced Study which is located in Princeton, New Jersey. Its founder was a man named Abraham Flexner who emphasized research based on intellectual curiosity – what the researcher just wants to know, rather than whether that research will be useful or not. This is what is meant by the “Usefulness of Useless Knowledge.” I would like to convey that same message to the young researchers of Japan today. 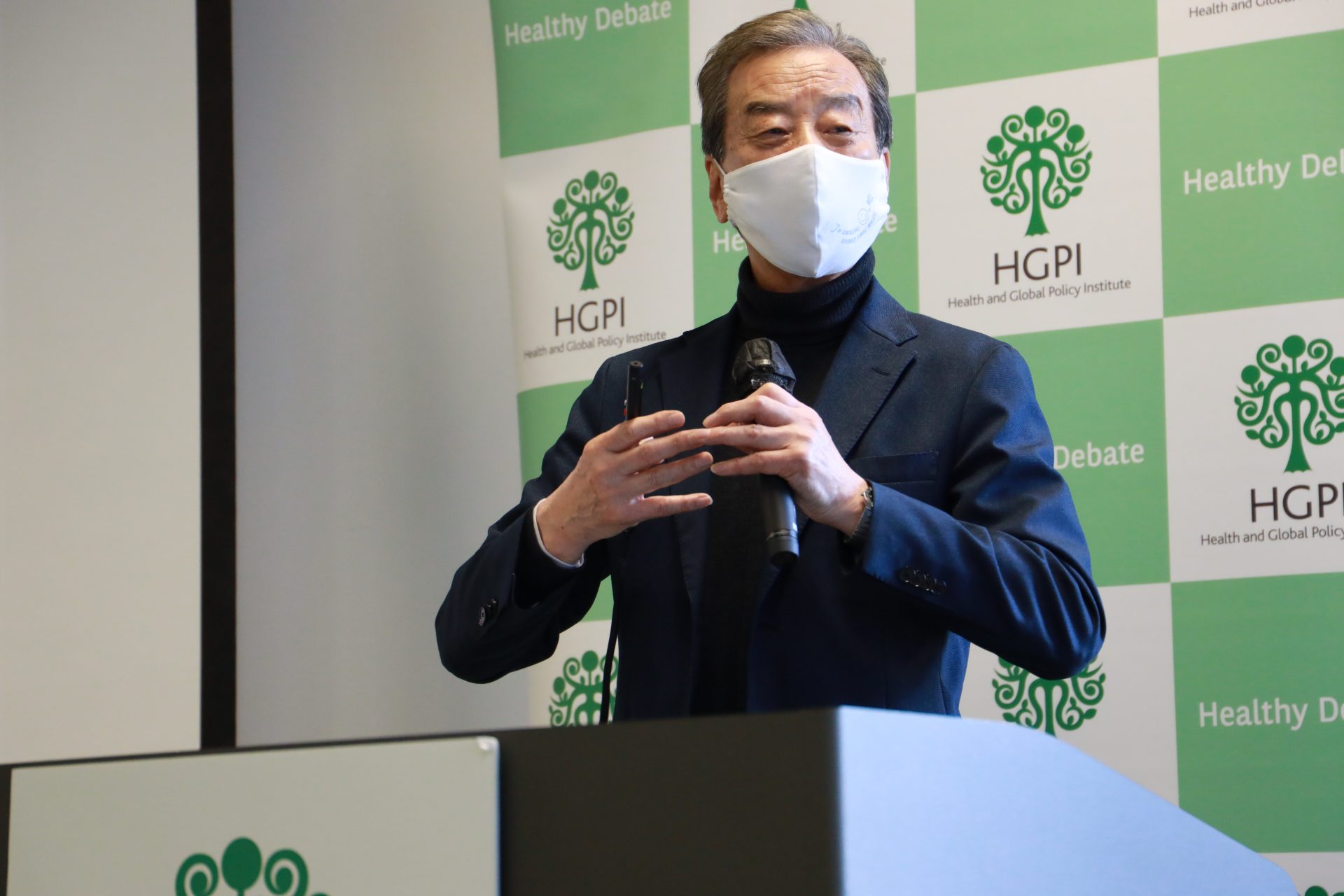 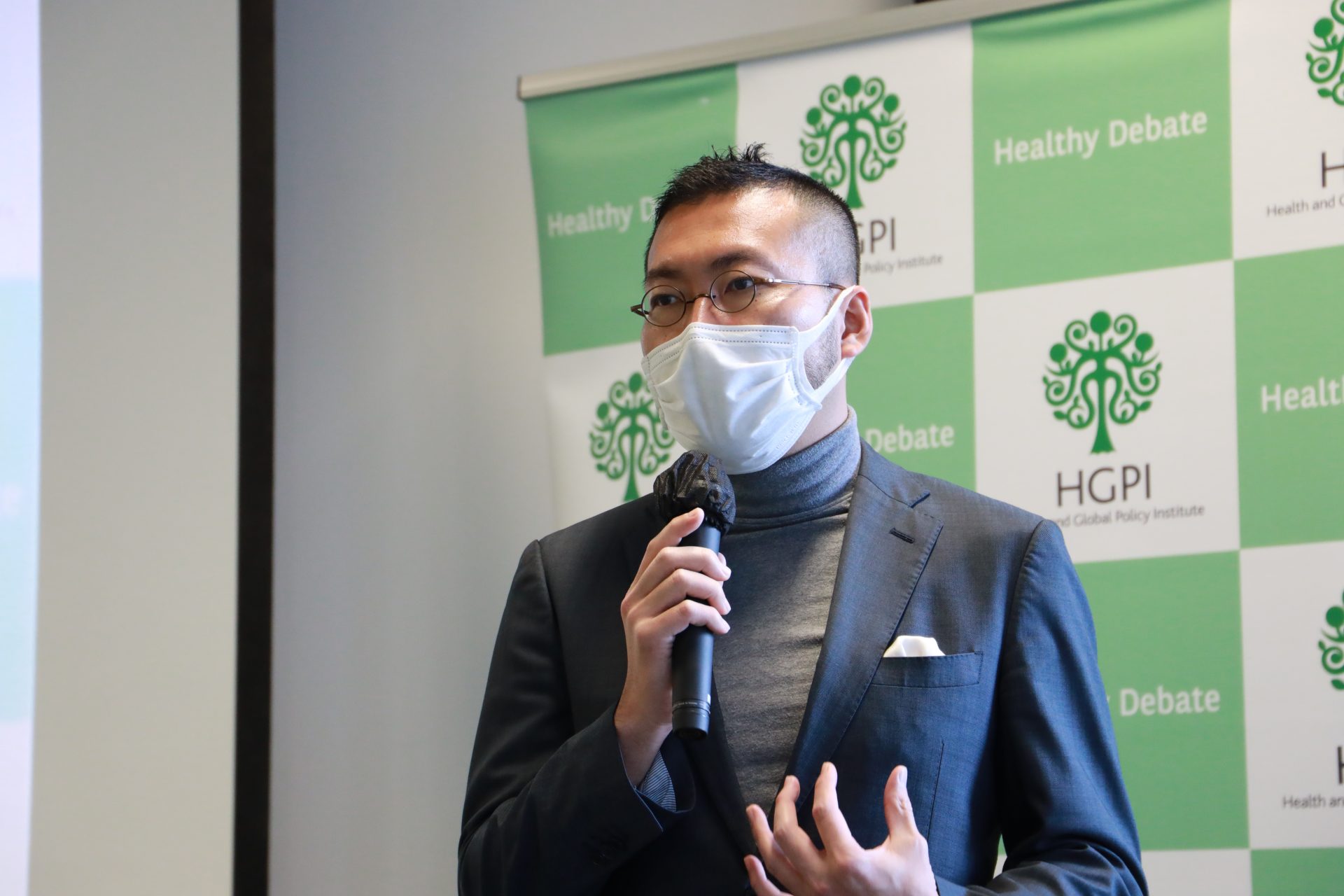 ■ The effects of COVID-19 around the world

I would also like to discuss the effects that COVID-19 has had around the world. It has already been over two years since the start of the pandemic. Advances in digital technology and the information revolution have made it so anyone can now see the circumstances in and responses taken by each country. We must pay close attention to what kinds of situations other countries are facing and how they are responding to the threat of COVID-19.

When we compare data on the number of deaths in each country, we see the situations differ greatly. For example, COVID-19 is the most common cause of death in the U.S. and Brazil and the second and third leading cause of death in the U.K. and France. On the other hand, there are relatively few deaths due to COVID-19 in Japan and Korea. This may have occurred due to various factors like genetics, geography, and policy, but when we look at a situation through data, what is important is to have a global perspective, not only the perspective of your own country. 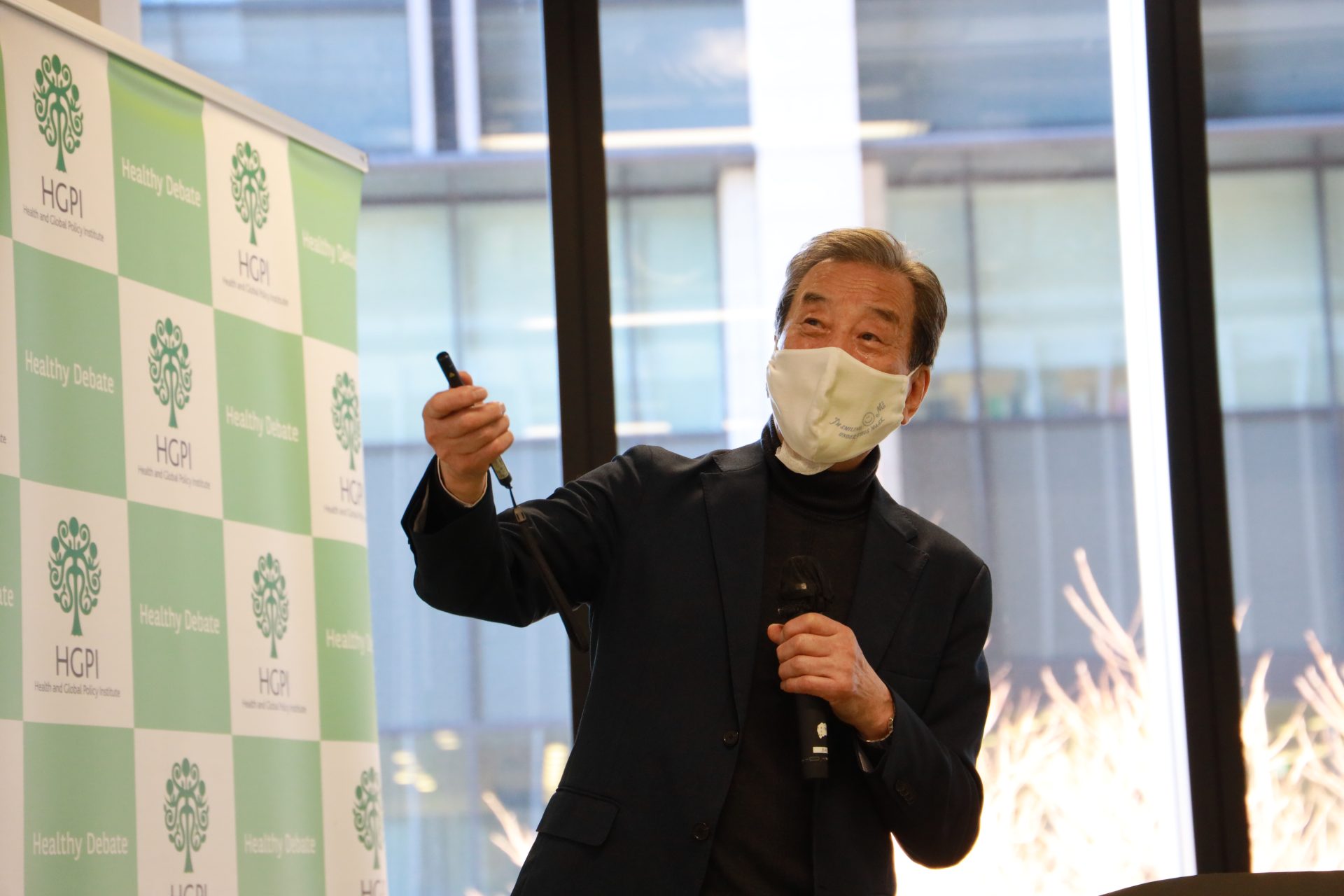 In June 2021, I was appointed Vice Chair of the World Dementia Council (WDC). The WDC is an independent, non-profit, international organization which was established after the 2013 G8 Summit under the leadership of the then U.K. Prime Minister David Cameron. I have been the only Japanese person to serve as a member of the WDC since its inception, and I have now been appointed its Vice Chair. Many WDC members are not dementia specialists, myself included. This is a unique characteristic of the WDC, and it demonstrates the wisdom of the U.K. I would like us to continue striving to be a driving force for the promotion of international dementia policies that transcend the boundaries between nations, regions, and professions.

One factor that led to this high recognition is our organization’s independence from the Government. We would like to continue working together with everyone to resolve global health and healthcare issues by continuing to generate effective health policy options for Japan and the world. 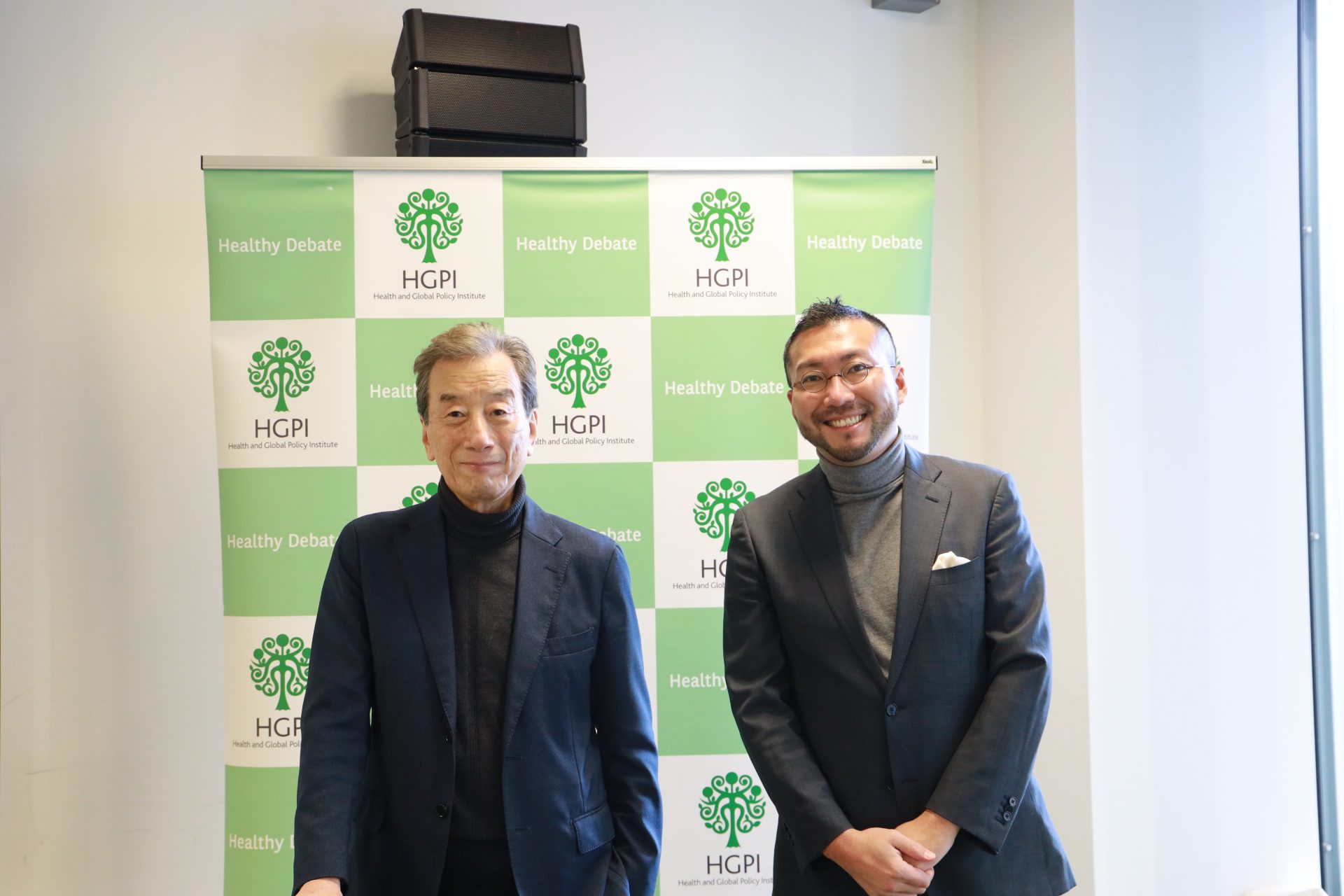 Dr. Kiyoshi Kurokawa (Chairman, Health and Global Policy Institute)
Dr. Kiyoshi Kurokawa is a graduate of the University of Tokyo Faculty of Medicine. From 1969 to 1984, he lived in the United States where he served as Professor of Internal Medicine at the University of California, Los Angeles (UCLA) School of Medicine. His other positions have included Professor of Internal Medicine, University of Tokyo; Dean, School of Medicine, Tokai University; President, Science Council of Japan (2003-2006); Member, Council for Science and Technology Policy, Cabinet Office (2003-2006); Special Advisor, Cabinet Office (2006-2008); and Commissioner, World Health Organization (WHO) (2005-2009). He also served as Chairman of the National Diet of Japan’s Fukushima Nuclear Accident Independent Investigation Commission (December 2011-July 2012), Chair and Representative Director of the Global Health Innovative Technology Fund (GHIT Fund) (January 2013-June 2018), and as Special Advisor on Health and Medical Strategy at the Cabinet Secretariat Headquarters for Healthcare and Medical Strategy Promotion (2013-2019).

Dr. Kurokawa’s current positions include Vice Chair and Committee Member of the World Dementia Council (WDC) and Chairman of the Investigative Committee on AI Simulation for Coronavirus Disease 2019 Countermeasures. He has been named professor emeritus at the National Graduate Institute for Policy Studies (GRIPS) and the University of Tokyo and as a Distinguished Professor of Tokai University.

< [Event Report] The 104th HGPI Seminar – “Prospects for Building an Integrated Community Care System That Can Respond to Mental Disorders and for Outreach Support” (March 4, 2022)

[Event Report] The 102nd HGPI Seminar – Examining Child and Household Poverty From the Perspective of Food Security as Highlighted by the COVID-19 Pandemic (December 3, 2021) >