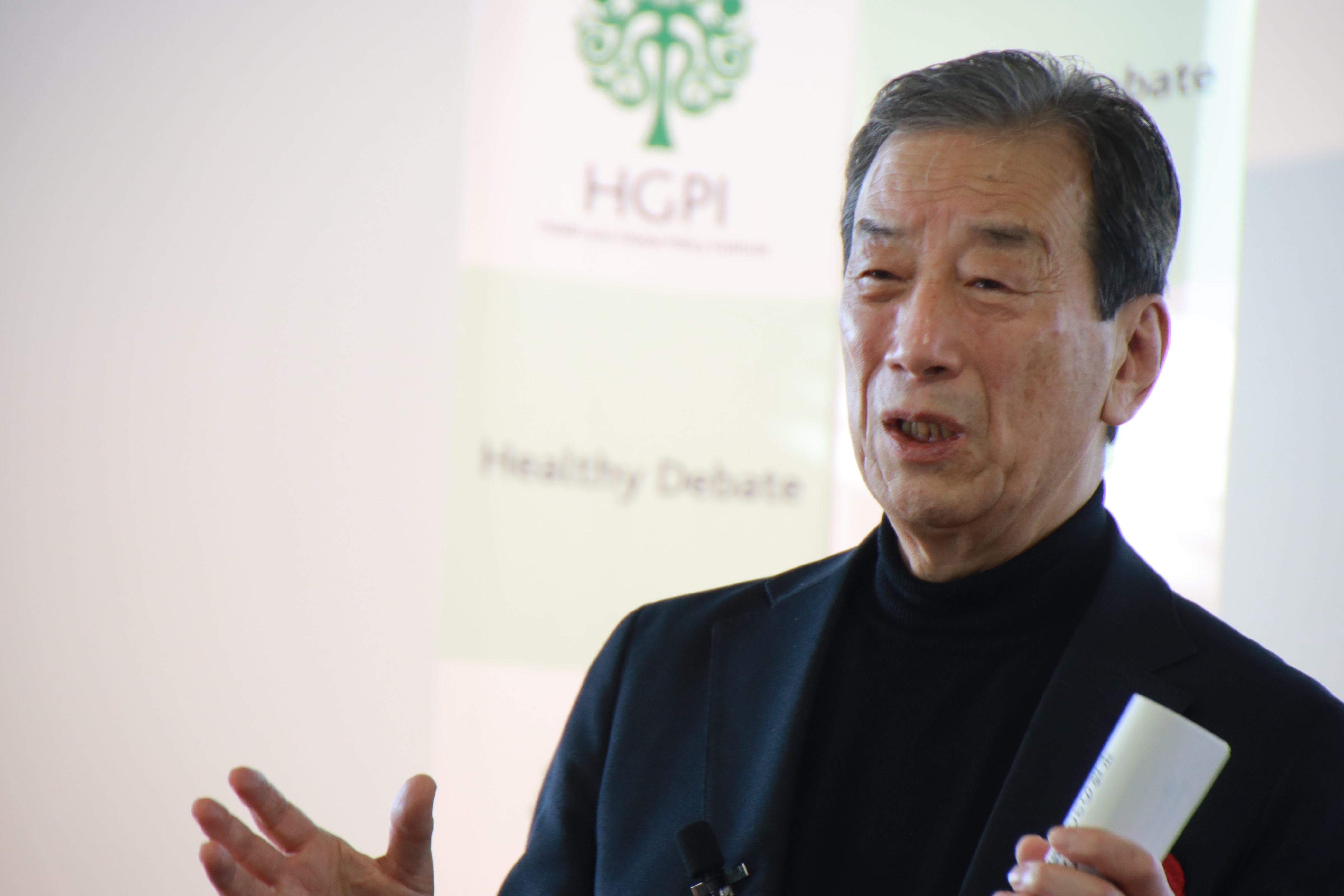 At the 74th Breakfast Meeting, in what has become an annual tradition, Dr. Kiyoshi Kurokawa, Health and Global Policy Institute (HGPI) Chairman, presented his vision for 2019, discussing with participants a variety of topics related to the following themes.
*Please feel free to download Dr. Kurokawa’s reading list, “Books Being Read by the Global Elite,” distributed during the meeting, from the link below.

■A Pivotal Year for Japan
At present, the situation facing the world, including the status of Trump Shock, globally, and Brexit Shock, in Europe, is changing at an unprecedented pace. Japanese manufacturing, which uses high-quality materials to produce high-quality products, has thus far served as the foundation that has supported Japan’s economic growth, but in the wake of a series of scandals at major Japanese manufacturing companies, that foundation is now in the process of collapse.
This year, the G20 Summit will be hosted in Osaka (June 28-29), and the Seventh Tokyo International Conference on African Development (TICAD7), in Yokohama (August 28-30). Amidst a state of global instability, nations around the globe are interested in which direction the world should head from here and how Japan will assume leadership at the G20 Summit.

■The Thirty Years of Heisei in Brief Retrospect
Globalization and technological progress including the spread of the internet are cited as significant changes that occurred during the 30-year span of the Heisei Era. During the first year of Heisei (1989), the Cold War came to an end, the Berlin Wall fell, and two years later, the Soviet Union dissolved. As a whole, Japanese society somehow clung to remnants of its Bubble Economy, maintaining its markets until around Heisei 7 (1995). At around that time it also seemed as though the spread of the internet and the release of Windows95 had opened up new frontiers. Beginning in Heisei 9 (1997), the internet really began to spread to the masses, and we entered an era in which data and information once concealable suddenly became something shared by society.
Then on December 18 of Heisei 22 (2010), the Arab Spring commenced, sparked by Tunisia’s Jasmine Revolution. Only 3 short months later, on March 11 of Heisei 23 (2011), the Great East Japan Earthquake and Fukushima Daiichi nuclear power plant disaster occurred, sending waves of shock through not only Japan, but the world at large. At that period in time, in my use of Twitter, I paid particular attention to and Retweeted information on the following 2 topics: One was what was happening in the Arab world as a whole, and the other was what sort of information was being generated by media in other countries about the nuclear disaster at Fukushima, which I spread by Retweeting. How the world views Japan and how Japan explains things to the world are questions of vital importance. The world will not accept a system that attempts to hide things internally. With eight years having passed since the Fukushima nuclear disaster, the question remains, “How could Japan have changed?” In Heisei 30 (2018), University of Pennsylvania Law School published an article related to this question, and it is a question that I would like everyone to ask themselves once more.

■Brexit and the Worldwide Shift to the Right
The Arab Spring brought about major changes in Europe, and since the Arab Spring, countries that accepted refugees and immigrants including the United Kingdom (UK), Sweden, and the Netherlands, have witnessed situations such as Brexit and the rise of the right-wing. One additional issue that underlies this worldwide shift to the right has been the disappearance of the middle class due to changes in the flow of wealth. Prior to the Fukushima disaster, the total assets controlled by the top-ranked 340 people in global asset rankings equalled the total assets of the poorest half of the world’s population of 70 billion. In Heisei 23 (2011), however, that number fell to around 200 people, gradually decreasing to 62 people by Heisei 27 (2015). Wealth tends to concentrate in the hands of a select few, and what we have now is a society in which the rich get richer. At the same time, with facts such as this one easily accessible online, the portion of the population dissatisfied with society is also growing.

■Issues Facing Japan
We need to develop human resources who can comprehend global circumstances and their context and who can be successful on a global scale while also understanding Japan. I would like to see reconsideration given to the question “What is the purpose of education?” Education in Japan does not provide enough real-world learning experiences, opportunities to learn from the lessons of history, and chances to think independently. In an increasingly globalized world, it is also important to recognize one’s weaknesses. It is important for us to develop a deeper understanding of how we are perceived around the globe. In the wake of the Fukushima nuclear disaster, nothing has changed in the Heisei Era, and nothing has changed in Japan. What we do from here is something that is up to all of us. 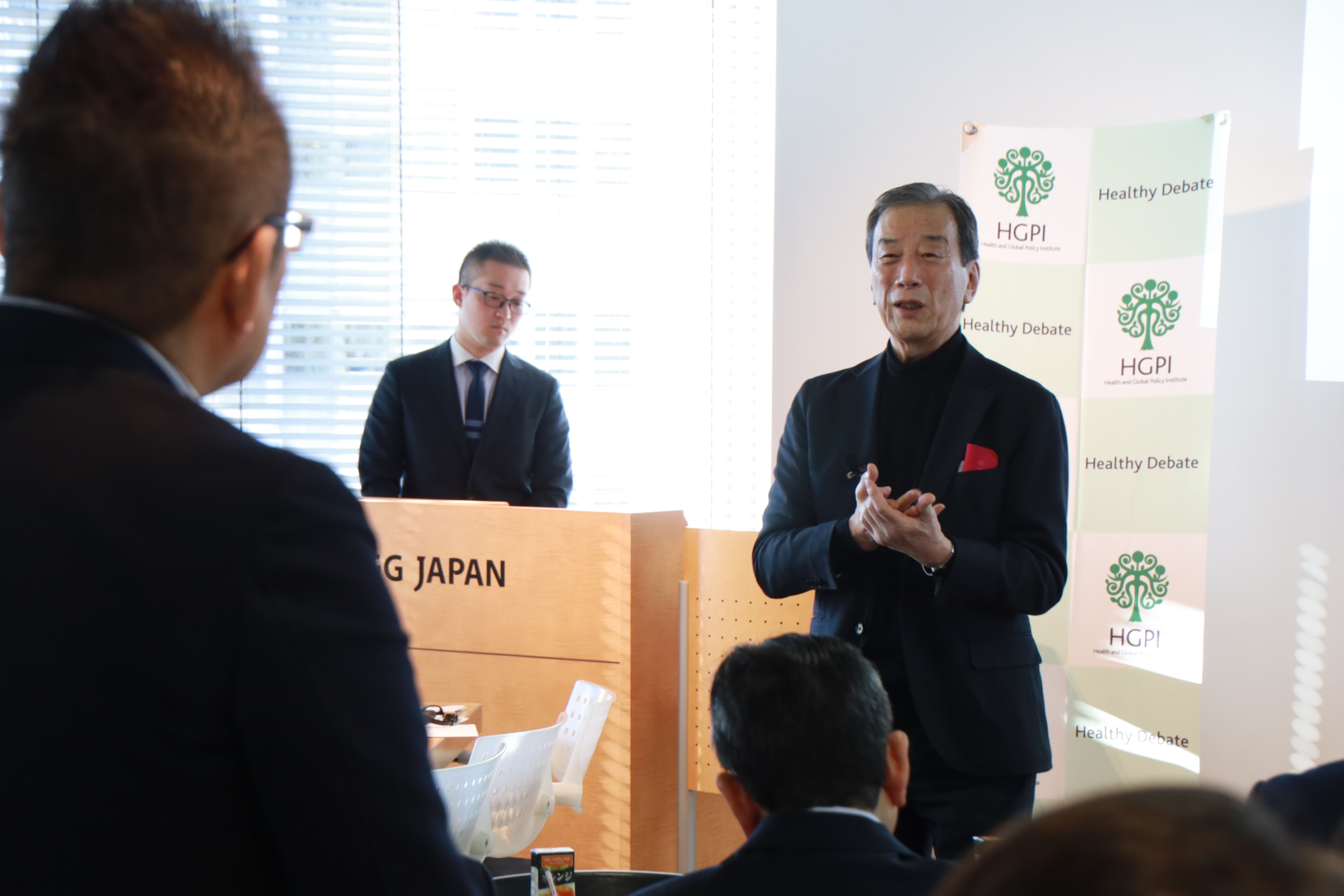 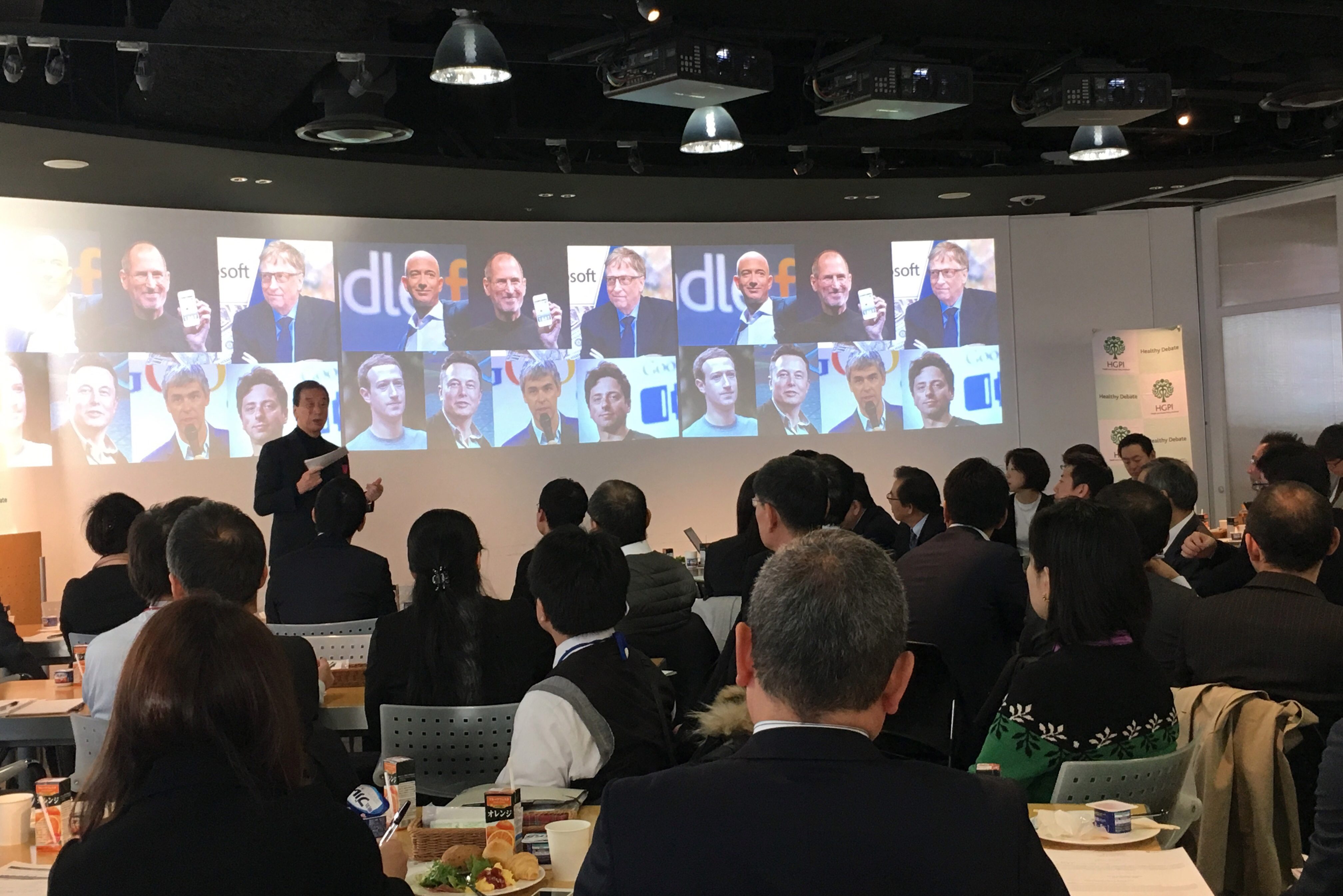