[Event Report] The 73rd Breakfast Meeting – Ideas for Passive Smoking Prevention from the 2018 Public Survey on Healthcare in Japan (October 23, 2018) 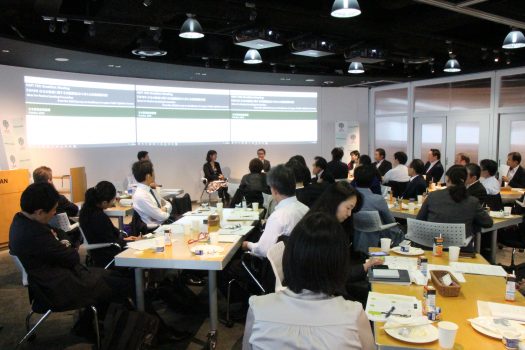 In June 2018, HGPI conducted the 2018 Public Survey on Healthcare in Japan (hereafter, the Survey). It asked 1,000 men and women over age twenty throughout Japan about secondhand smoke, the human papillomavirus (HPV) vaccine, and end-of-life healthcare.

Given the actual conditions surrounding the issue and the revision of the Health Promotion Act passed in July 2018, Professor Yuri Ito and Mr. Kazuo Shimada were invited to the meeting to discuss their current efforts against passive smoking. Professor Ito is founder of an internet site called “Quemlin” that helps users find non-smoking eating and drinking establishments (her affiliations are detailed below). Mr. Shimada, who belongs to the Yoronotaki Co. Ltd. Restaurant Management and Development Group, explained his company’s current efforts in the movement towards creating non-smoking eating and drinking establishments.

HGPI Board Member Kohei Onozaki began the meeting with an introduction of  anti-passive smoking measures currently being pursued in Japan. Touching upon the fact that efforts to curb indoor passive smoking have been lax, he pointed out that approximately 80% of Japan’s population is non-smoking and explained that calls for a complete indoor smoking ban in eating and drinking establishments have increased in recent years.

There are currently 459 establishments listed on Quemlin. In the past, she personally visited non-smoking establishments to research them and create listings. However, to overcome the shortcomings of this method and to spread the word about which establishments have total indoor smoking bans to as many people as possible, she started a special volunteer reviewer dispatch system on World No Tobacco Day, which was May 31st, 2018. After gathering a number of volunteers from among those who share the vision of Quemlin, she had them visit eating and drinking establishments to see if they meet Quemlin’s standards. Owing to the fact that Professor Ito resides in Osaka, the area is over-represented in Quemlin’s listings (at 139 establishments, Osaka is the area with the most listings). In the future, she aims to increase the number of establishments on the site and will actively recruit special volunteer reviewers.

Comments from owners of eating and drinking establishments that ban indoor smoking and are listed on Quemlin
When interviewed, owners of establishments listed on the site had the following to say:
―Why did you ban smoking?
・Because the owner or their family had a change of health
・Because customers complained or there was other trouble with customers
・Out of consideration for current attitudes in society
・Because many of our customers were non-smokers

―What happened after you banned smoking?
・Although sales fell temporarily, they soon recovered to or exceeded their original levels.
・It led to an increase in income per customer. For example, some began to order expensive wine.
・Only a few of our regulars left us and we started getting more families.
・We were able to attract more part-time workers using our clean working environment as a draw.
・After our smoking ban, we learned that some of our regulars come from far away not to enjoy our food, but to smoke.

Future developments
Mrs. Ito would like for her efforts with Quemlin to be used to conduct research, for example to examine the relationship between the ratio of non-smoking eating and drinking establishments and health outcomes, or to conduct an intervention study using Quemlin. She, together with her team of special dispatch reviewers, would like to decrease the amount of passive smoking experienced at eating and drinking establishments near universities and hospitals in the future. 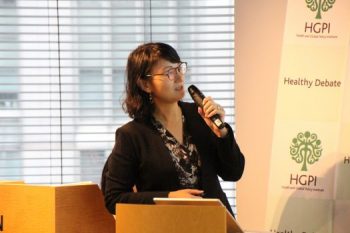 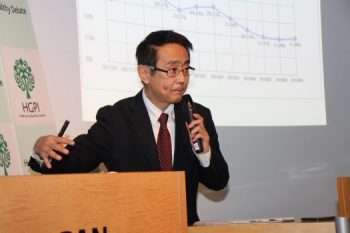 ■Case study 2 (Mr. Kazuo Shimada)
The background of Yoronotaki Co. Ltd.’s trial indoor smoking ban
From May of this year, Yoronotaki Co. Ltd. conducted a trial indoor smoking ban in four of our (as of December 2017) 488 locations – the Yoronotaki Kabuki-cho branch and the Danmaya Suisan branches at Hirose-dori Station in Sendai, Porte Kanazawa in Kanazawa, and Sakae Sanchome in Nagoya. Since eighty percent of our restaurants are franchises and only twenty percent of them are directly operated by the parent company, we must be sensitive to changes in society and public opinion. Since people of middle and advanced age constitute a large portion of our customer base while families are only a small portion, we conducted a trial total indoor smoking ban to test its effects on our smoking customer base.

The effects of the indoor smoking ban on sales and new measures and experiments to gain customers
Average daily sales at our Kabuki-cho branch decreased considerably compared to May of last year, 2017. Sales also decreased at the branches in Sendai, Kanazawa, and Nagoya. Since we have restaurants other than these four locations, the drop in sales did not greatly affect our chain. However, if a privately-owned restaurant saw the same effects to its bottom line, it might be driven out of business.

To lessen the decrease in sales, we tried appealing to the public by advertising that we are fully non-smoking on social networks and on our homepage. Additionally, at the Danmaya Suisan Sakae Sanchome branch, we are actively testing new promotions, such as one in which customers can buy their first drink for 22 yen on the 22nd of every month, or by having a special service day for customers undergoing outpatient treatment for smoking. The first step is notifying many people of the merits of visiting our establishment which has completely banned indoor smoking.

Future Developments
In the future, we will continue our efforts to communicate the appeal of eating and drinking establishments that ban indoor smoking and to create spaces that are comfortable for non-smokers.

■Profiles
About Ms. Yuri Ito (Chief, Associate Professor Department of Medical Statistics, Research & Development Center Osaka Medical College/Research Area: Cancer Epidemiology, Health Inequalities, Health Statistics)
Yuri Ito is the Associate Professor at Osaka Medical College in Japan. She received her MSc and PhD in Health Science from Osaka University. Her research is based on the descriptive epidemiology in cancer using the cancer registry and other official statistics data for policy making and evaluation, since when she worked in the Osaka International Cancer Institute. She has started a website called “Quemlin”, which enables users to search for smoke-free restaurants, cafes, and bars by type of cuisine and location since October of 2015.

About Mr. Kazuo Shimada (YORONOTAKI CO., LTD., Restaurant Management & Development Group, Sales Strategy Section, PR Team)
Born in Tokyo in 1961. Graduated from the College of Sociology of Rikkyo University in 1984, and joined YORONOTAKI CO., LTD. that same year. After many years in the company’s restaurant development and franchise divisions, he was appointed Editor-in-Chief of the YORONOTAKI Group’s public relations magazine and PR Head in April 2018.