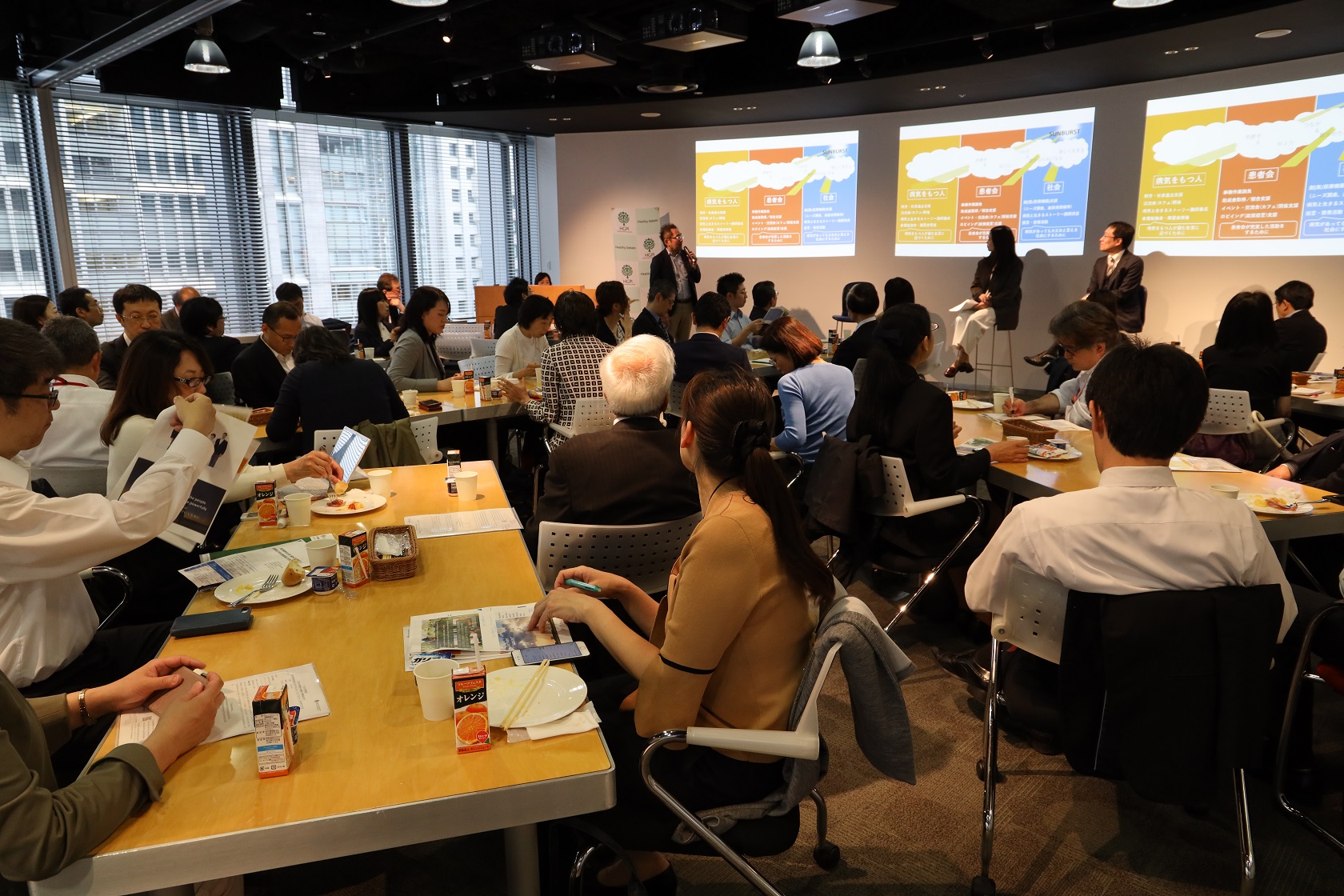 At the 77th breakfast meeting, HGPI hosted Mr. Hiroki Takeda (Assistant Chairman for the Social Welfare Corporation Habataki Welfare Project), who spoke at all of HGPI’S NCD Global Forums for Civil Society, and Mr. Takeshi Shukunobe (President and CEO, PPeCC) who participated in our workshops and opinion exchange sessions for people with NCDs and organizations representing them. Together with everyone in attendance, we deepened our understanding of the shared challenges facing all NCDs. 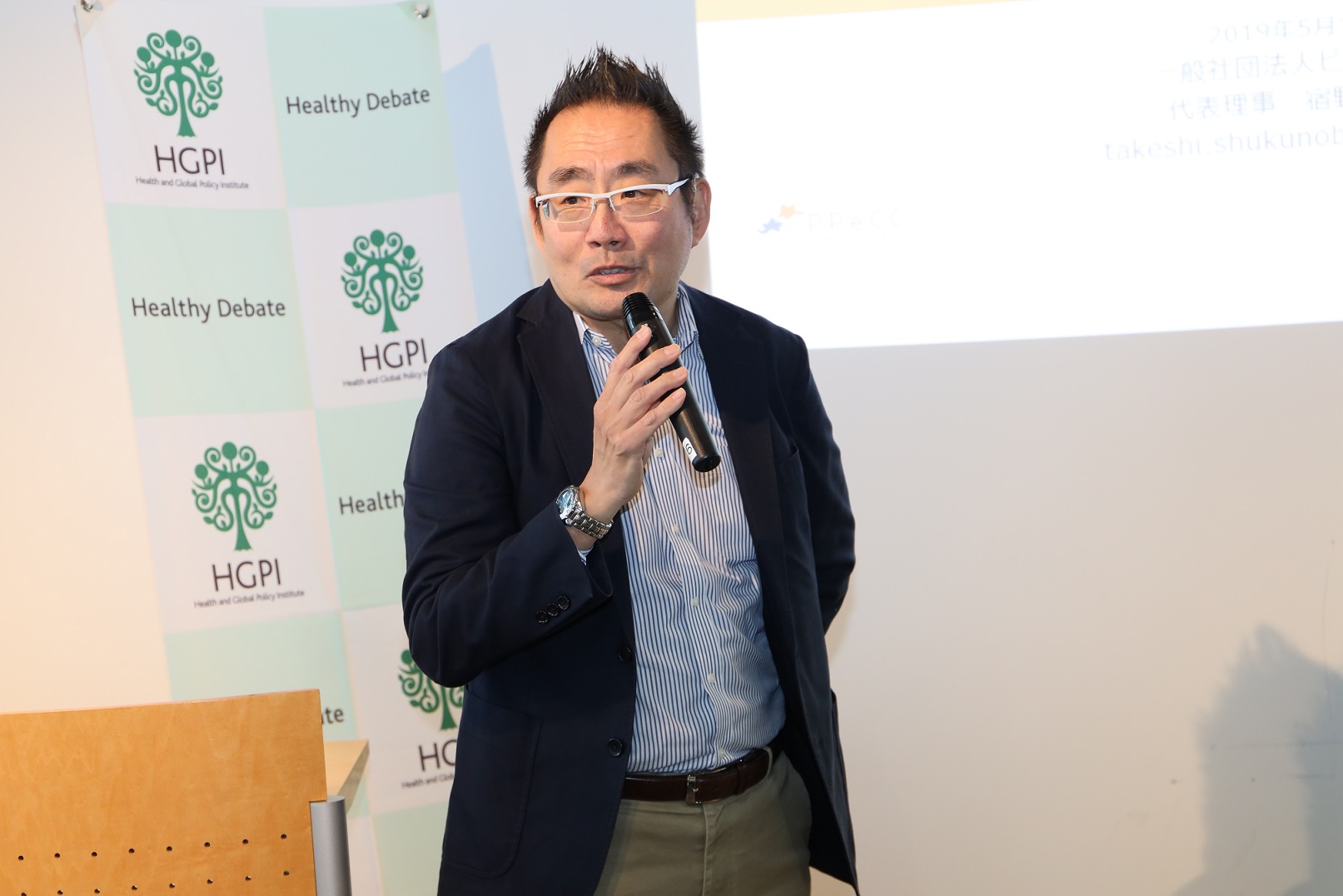 I contracted chronic nephritis when I was three years old and began dialysis at 19. I have continued dialysis for 32 years. In 2008, I successfully obtained certification as a social worker. After starting work as a social worker, I founded Patienthood in 2010 and PPeCC in 2019.
Patienthood operates the website Jinlab and runs the Patient Partnership Program to promote collaborative care involving people with diseases. It also provides employment support to people receiving dialysis. Patienthood holds events twice yearly at the Association of Advancing Medical Collaboration with Patient (AMCOP). PPeCC was founded this year and held its first PPeCC Café on Saturday, May 11.
The name PPeCC comes from the phrase, “Power to the People with Chronic Conditions,” which is also its mission statement. We work to pursue the following three visions. 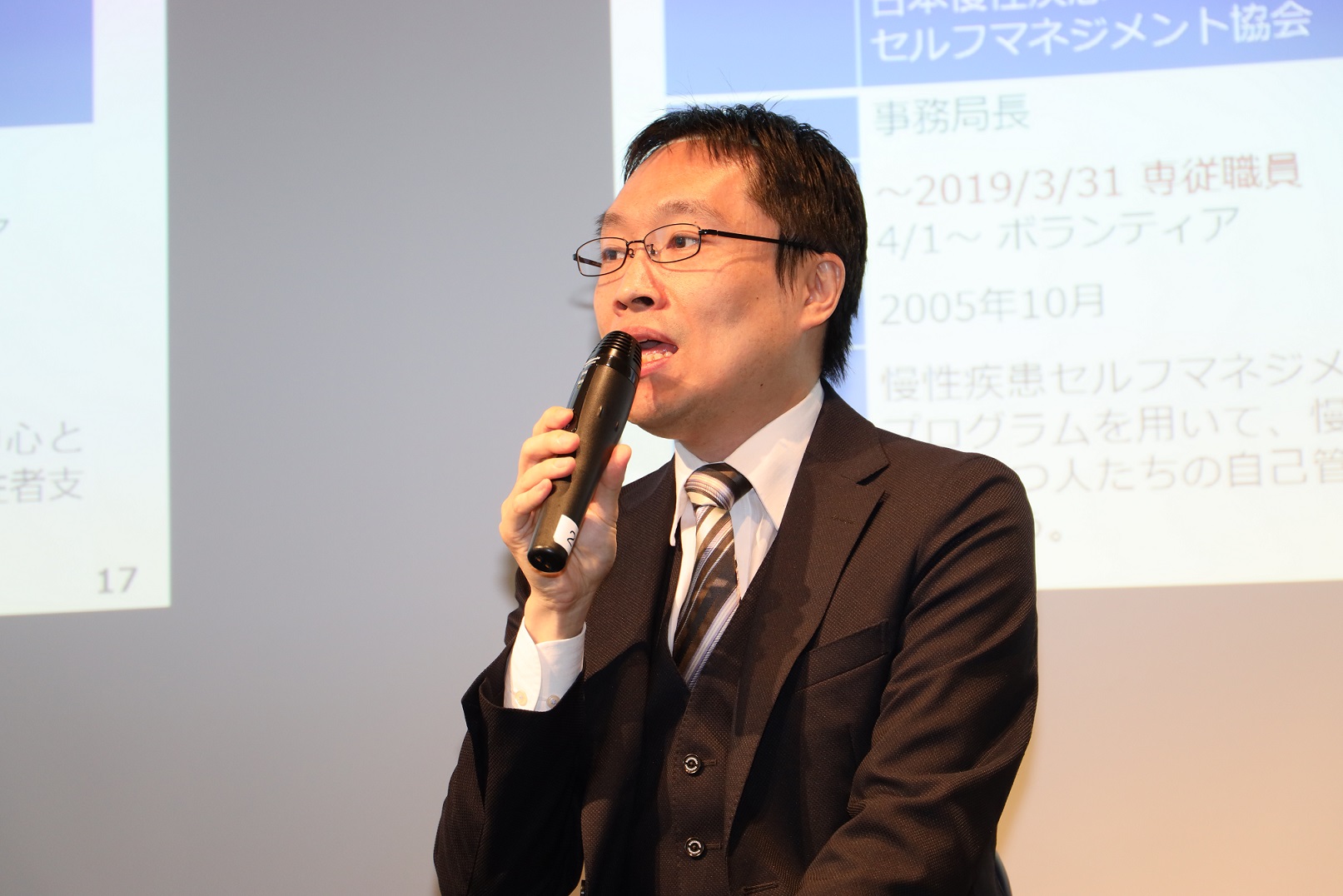 According to a survey conducted by Stanford University’s Self-Management Resource Center (formerly the Stanford Patient Education Center), the challenges facing people with diseases can be arranged under three headings. The first is “Symptoms” and it covers pain and fatigue as well as efforts for people to learn about their own condition. The second is “Lifestyle” and includes things like work and relationships with friends and family. The third heading, “Emotion,” includes feelings like uncertainty and irritation. If people with diseases can independently overcome these three challenges through self-management, they can decrease the number of hurdles they face in their everyday lives.
The Chronic Disease Self-management Program (CDSMP) was developed to assist them. The NPO I belong to, the Japan Chronic Disease Self-Management Association has adopted this program. In Japan, we ran a before-after study on people who participated in the CDSMP. Six months after the program, there were statistically significant improvements in their perception of their own health, improvements in their communication with doctors, decreases in anxiety caused by health issues, and increases in daily lifestyle satisfaction and perception of self-efficacy.

■Discussion
-How significant is it to collect the viewpoints of those most affected by NCDs on the challenges facing every NCD and sharing those viewpoints with society? 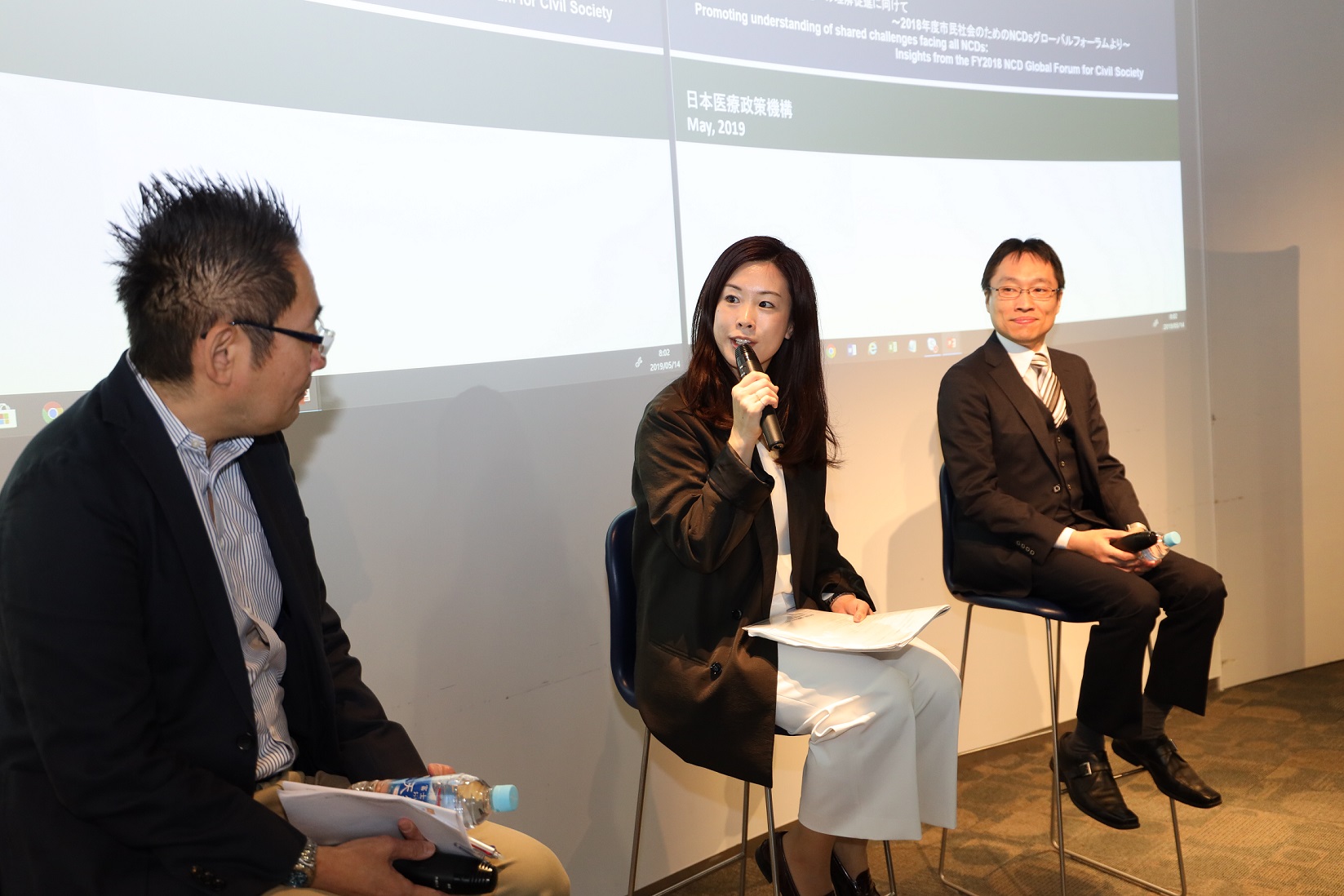 Mr. Takeda: The HIV-tainted blood scandal ended in 1996 when the defendants, which were the government and five pharmaceutical companies, acknowledged their responsibility and reached a settlement. After negotiations between the plaintiffs and the government, the government promised that the opinions of the people affected would be incorporated into permanent countermeasures such as in healthcare policy. As a result, antiretroviral drugs for HIV that were already approved overseas were fast-tracked for domestic approval. The government promised to handle the process in four months from application to approval. Other measures included the establishment of the AIDS Clinical Center (ACC) as a national center in 1997 or the base hospital system being put into place nationwide. These measures greatly decreased mortalities among the victims of the HIV-tainted blood scandal. The thoughts and convictions of those affected by the scandal acted as a driving force for the country and saved many lives.

Mr. Shukunobe: The average age of people on dialysis is around 70 years old. While there are some people in their working years, approximately 30% of them are not working. We will strive to widely propagate information concerning arrangements companies should make and other measures they should take when hiring people who are on dialysis.

Also, no matter the disease in question, it is important that someone supports the ability of people with NCDs to feel they can participate in employment as full members of society. They must pay attention to maintaining the proper balance when working. They must not push themselves too much or become over-reliant on supporters. Communication between the person working and the people receiving them is important.

-What measures are necessary to incorporate the opinions of people with NCDs into healthcare policy?

Mr. Takeda: Such measures include collecting examples of difficulties directly faced by people with NCDs and their families (by providing support for organizations for people with diseases, family organizations, and support organizations), promoting the participation of people with NCDs in the healthcare policy decision-making process through policy councils and research societies (by training speakers among those most affected), and elevating their status in the sector for related parties so that they are included among stakeholders (by empowering those most affected and by developing society). Actually, these are all goals of PPeCC. As for the things we require from people with NCDs – and there are many – they do not need to all be implemented independently. As we start to involve a great many people with NCDs and related parties in the decision-making process for healthcare policy, I think it is okay if each individual utilizes their personal strengths. It is important to continuously increase the number of players. While doing so, we must build a platform that enables a diverse range of stakeholders to work together. 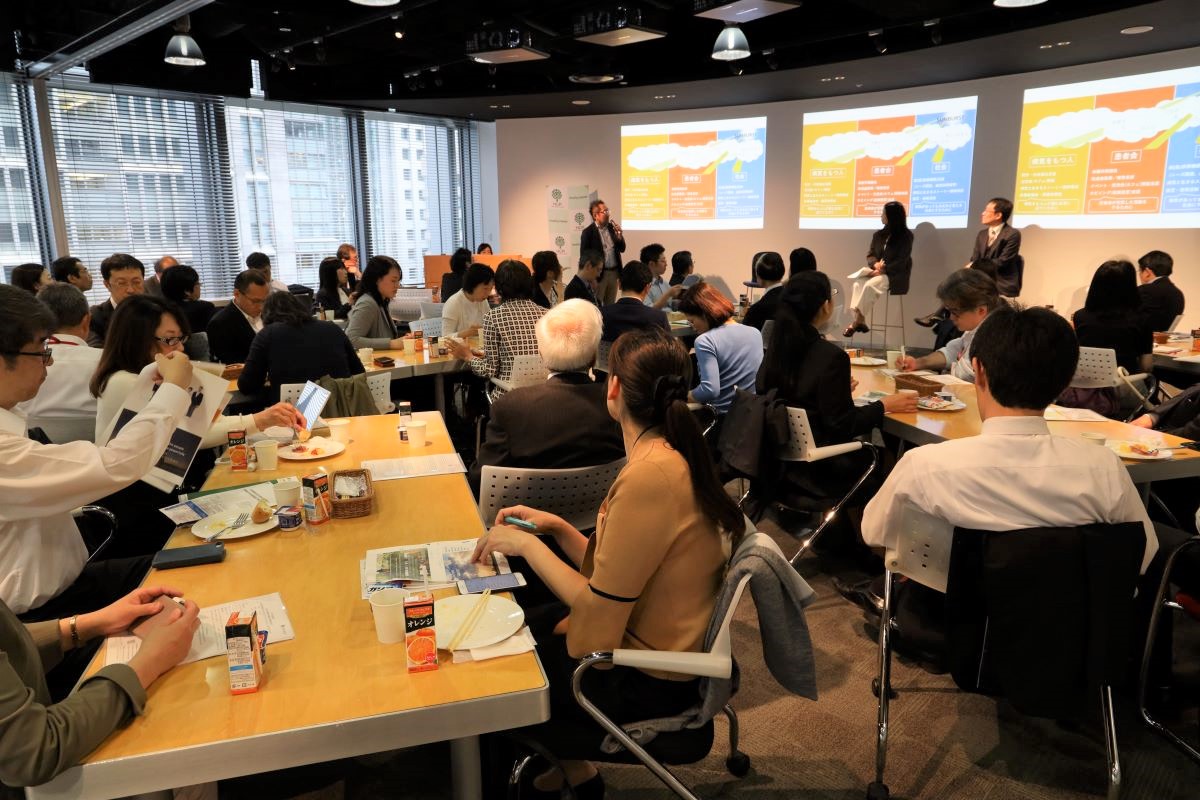 ■ Profile
■ Mr. Hiroki Takeda
A graduate of Waseda University School of Social Sciences, Hiroki lives with hemophilia and was infected with HIV via the administration of unheated blood products (during the “HIV-tainted blood scandal”). He has worked for the Japan Chronic Disease Self-Management Association since its establishment in 2005, and in 2007 he completed the Chronic Disease Self-Management Master Training at Stanford Patient Education Research Center. He is currently serving as a Board Member for the Social Welfare Corporation Habataki Welfare Project, an Auditor for the Japanese Network of People Living with HIV/AIDS (JaNP+), a Steering Committee Member of the Society of Nanbyo (intractable and rare disease) Centers, and on the Ethics Review Committee for the Department of Nursing in the Tokyo Medical University School of Medicine.

■ Mr. Takeshi Shukunobe
Mr. Takeshi Shukunobe was born in 1968. He contracted chronic nephritis at age three and began dialysis for chronic renal failure at age eighteen. He has continued dialysis for 31 years. In 2008, his left kidney was removed due to renal cancer. He is a physically disabled person. He is a certified social worker and chairs an association called Patienthood. After resigning from Sony Corporation in 2006 and obtaining his certification as a social worker, he founded Patienthood in 2010. He is also CEO of a patient activist organization for promoting healthcare called AMCOP and serves as a counselor at the Setagaya City Department for People With Disabilities.