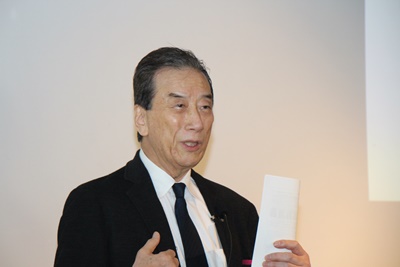 At this breakfast meeting, HGPI Chairman Kiyoshi Kurokawa gave his annual talk. This year’s talk was entitled “New Vision of 2018.” Dr. Kurokawa engaged in a discussion with attendees on the following topics:

■The current state of the education of Japanese researchers

“Ten years ago, Japan was second only to the United States in the number of academic papers published annually. Since then, however, the number of academic papers coming out of Japan has drastically decreased. Even the number of worldwide citations of Japanese papers has been decreasing. What is the reason for this? Japanese society is hierarchical, not only in the business world, but in academia too. In such settings, competency alone does not determine an individual’s position or rank – personal relationships play an important role. In 2017, Sontaku (mindfulness or consideration for others) became a very popular term. The problem is, this isn’t a new concept, sontaku has existed as a concept for a long time throughout our history. All around the world, most PhD graduates start work as independent researchers after they earn their degree. However, in Japan, on the other hand, most people who graduate from PhD programs begin their careers as research assistants to professors. They do not start as independent researchers. Theoretically, a PhD graduate should be able to assume the role of an independent individual who can blaze new trails for the next generation of research.

Some have said that the reason behind the decline of scientific output in Japan is the small budget allocated to science and technology compared to other countries. However, the amount of public expenditure on research per researcher in Japan is higher than in the United Kingdom. It is certainly true that the overall research budget in the United States is large. However, research budgets in the United States often incorporate wages for Principal Investigators and other researchers, whereas in Japan research budgets typically do not include these costs, making it difficult to directly compare figures. What actions should be taken given this prevailing state of affairs? Educators must deeply ponder the current situation and how to revise our educational system for the next generation of researchers.”

■ Education to transform the next generation

“In Japan, science and liberal arts programs are completely separate. Students enrolled in liberal arts programs do not share courses with science students, and vice versa. This differs from the situation in globally prominent universities such as Cambridge and Oxford, where there is no concept of separating science and liberal arts curricula. The educational system offered to students in such universities is more accommodating to their needs. For example, in Cambridge, one mentor is responsible for a pair of students, and every week they assign the students books dealing with particular topics. The students write essays, give presentations, and occasionally compose academic papers on those topics. There is no equivalent process in the Japanese education system for the promotion of debate and deep thinking like we see with the Cambridge process.”

■Why do we need to be challenged?

“Some have said that technology will develop such that we will reach a singularity in 2045. What that means is, at that point, we can expect technology to have outpaced the functional capabilities of the human brain. Eventually, the capabilities of machines will overcome the capabilities of humanity. That is why we need to challenge the limits of what humans can accomplish. It is very important to keep on improving by learning from the mistakes we accumulate while young. If we can make two steps forward, even if we fail and fall a step back, we are still making progress. Failures must not be repeated. This is a good way of building up experience. Real experiences give rise to real successes.

That is also why it is important to go abroad and see the world while still young. If we are going to change our society, which revolves around technology, we must not be prisoners to our pre-conceived notions. We must persist in challenging them.”