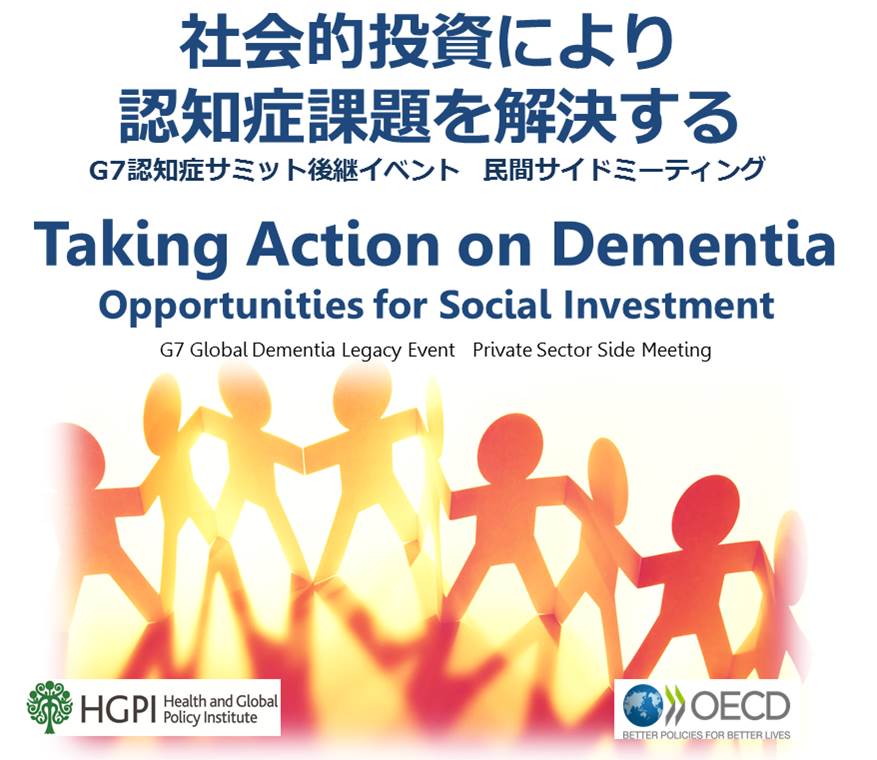 Coinciding with the Global Dementia Legacy Event hosted by the Japanese government November 5-6, 2014, Health and Global Policy Institute and OECD co-hosted a private sector side meeting on November 7, 2014.
This event served to increase momentum behind private sector-led strategies that address dementia. The event was attended by nearly 120 individuals representing domestic and international industry, governments, non-profits, and media. Audience and hosts at the event

Mark Pearson, the Head of OECD’s Employment and Policy Affairs Division, started off the event by discussing OECD’s role in an aging society. He discussed the essential need for investment from the private sector in the fight against dementia. And he focused on care efficiency and quality as the keys to this issue.

“Over the next 20 years, people will increasingly be affected by dementia, in large numbers and at younger ages. Support from the public sector will of course have to increase as informal care giving by family members will increasingly become an issue. Currently, care and support services for extended periods of nursing care are insufficient. Opportunities to increase the efficiency of care can be found through innovation.”


Following Mr. Pearson’s presentation, 9 presenters shared their ideas and their contributions with the audience. Chief of Innovation Division at SoftBank Group, Kenichi Yoshida, explained how Pepper, SoftBank’s emotion sensing robot, can be of service to older persons as well as persons with dementia.

“Pepper, a robot that understands emotions and expressions, was not initially designed with older persons in mind. But overtime, several older persons have written letters and shared their thoughts on Pepper leading us to think that Pepper could be of use to older persons, so the development process continues. During a test session at day service facility, Pepper was able to make older persons happy. Moving forward, we are thinking about all the potential ways Pepper can be of service to those affected by dementia, whether it be through extending care from the family or dance exercises that help prevent or slow progression of dementia.” Shinsuke Aoki, Chief Researcher at the HONDA THINK Research Center, discussed the potential of mobility and his aspirations to aide this potential in an aging society.

“Established in the postwar era, Honda has been working to develop products with a focus on mobility. Recently, Honda developed the UNI-CUB, a type of “dream vehicle” that requires neither brakes nor an accelerator. This new technology allows for personal mobility by moving in the direction of the user’s gaze. We have not yet developed products to help persons with dementia, but we believe that we can play an essential role in the mobility of persons with dementia, their families and health care providers through the development of this technology.” Lynn Kramer, Chief Clinical Officer and Corporate Officer at Eisai Co., Ltd., focused on the role of the pharmaceutical industry as the industry paradigm shifts.

“The pharmaceutical industry’s goal is to contribute to the health and welfare of people through the development and improvement of effective pharmaceutical products. By gaining a deeper understanding of this disease, innovative approaches can be developed.  At Eisai, we are finding that through collaborations with various groups at the earliest stages of clinical development, innovations emerge. To confront Alzheimer’s disease, early diagnosis and biomarkers are essential. I want to contribute to this issue by developing therapeutic drugs and diagnostics.” Yoshiyuki Sankai, Professor of Systems Information at University of Tsukuba and Principal Investigator at the Center for Cybernics Research, spoke on the changing applications of robotics and other aspects of his recent research.

“The aging society we face today will see increasing losses of bodily and cognitive functions. Cybernic systems utilize a technique that connects body functions to the nerve system. Research also shows that movement and exercise, such as walking, is an effective way of preventing and slowing the progression of dementia. The HAL robot suit is the world’s first cyborg robot that synthesizes humans with technology. I would like to use this technology for not only physical issues, but also for those issues that arise with dementia.” Mayumi Matsumoto, Sales and Business Development Manager at Yamato Transport Co., Ltd.’s Iwate Regional Branch, spoke on the idea that she came up with that is now being spread across Japan, “TA-Q-BIN That Cares,” a system designed to allow package delivers to serve as informal caregivers as they perform their regular package delivery services.

“Magokoro TA-Q-BIN (or “TA-Q-BIN That Cares”) started after I learned that one of my client’s had died alone. Yamato Transport in Japan employs 150,000 people and a majority of our drivers are recruited from local areas at young ages bringing with them an understanding of the community they serve. I started to think that this delivery network could be used to watch over older persons who live alone. Through the combined efforts of various private sector actors, there is great potential to support Japan. We cannot do it alone. The private and public sectors must make a sustained and cooperative effort to contribute to the safe guarding of society. I look forward to working with each of you.” “Duskin’s Home Instead Division is a unique care model designed with great regard for mutual trust. In addition to assistance with transport, shopping, and meals, this service helps with everything. It can even be of help to those who have reached late stages of Alzheimer’s disease. We want to contribute to ensuring that those who live in their homes are able to do so safely and for as long as possible. In addition, within our office, we are engaged in training to become supporters of those with dementia.” Makoto Okada, Senior Manager of Fujitsu Laboratories R&D Strategy, advocated for increased innovation to address dementia through cooperation from a variety of stakeholders.

“True innovation does not emerge from industry and businesses alone. We must try to create a society in which we reach across sectors. There will be these so called “super users” for whom daily tasks, such as using an ATM, will become quite difficult. These issues go unnoticed to those who work at banks and those who design ATMs, so and I point them out. As we work to create a dementia friendly society, competitive business opportunities will emerge. Japan should work to encourage collaborations between various companies as is done in the UK.” Shinjiro Hayashi, Executive Director of Yamaman Co., Ltd., spoke about his company’s strategies to address the increase of older persons coupled with a declining birthrate.

“I have been working for more than 40 years to develop private-sector-driven city. From the start, we have developed the town with a focus on the following five ideas: the combined issues of low birth rate and aging population, a high regard for financial reporting, the environment, decentralization, and internationalization. The issue of fewer children coupled with an aging population should be considered side by side. With this in mind, we built an after-school day-care center in center of a group home for older persons. Currently, there are 60 residents, and the facility provides a space for persons with dementia and children to spend time together in a natural setting. It is of course necessary for public and private sectors to work together, but I would like to integrate universities to create a triad of industry, government, and academia. A program that links colleges, such as CCRC in the US, is something that Japan should consider adopting.” George Vradenburg, Convener of the Global CEO Initiative on Alzheimer’s Disease, closed the presentation session by encouraging Japan to continue to take the lead on action against dementia.

“I am impressed with Japan’s incredible efforts. Why is the private sector’s involvement essential to this issue? Japan is not the only country being affected by an aging population. Other countries are facing this same crisis and, in the face of issues such as Alzheimer’s disease, government alone is limited. A few days ago, Prime Minister Abe declared a new strategy to address dementia. In Japan and around the world, there is a need for global industry to increase cooperation on this issue.” “Digital technology such as computers and smart phones has brought about the biggest change since the Industrial Revolution. There is great potential in big data and robotic technology. Japan, a country facing a declining birth rate and aging population must engage the private sector to think and act. In addition, it is important to think about the way in which we present products and services to the outside world. Move forward into the global market place with a strategy that goes beyond Japan. It is my hope that this great technology will be steadily delivered to the places where it is most needed.”

The Minister of Health, Labour and Welfare, Yasuhisa Shiozaki, provided a video message in which he stated, “To address dementia, not only must the government as a whole work together, the government and the people must also come together. I have great expectations of the potential of private sector led initiatives.” “Through collaborations between government, medicine and healthcare, we can make a society that is supportive of persons with dementia as well as their families. Collaborations across ministries and government offices will also take place to address dementia. To this end, I want to express my appreciation to the private sector for taking action on dementia. I anticipate great advances will emerge from private sector expertise in the areas of dementia prevention, diagnosis, treatment, and community and family care support. Japan should be proud of its many achievements in ICT and robotics. Through collaborative efforts between the public and private sectors, I hope that Japan, the world’s fastest aging country, will be able to lead the world through the actions it takes.”