[Interview Series] “Mental Health Policy in the Eyes of Those It Affects” Interview #2: Mr. Yasuhiro Obata “Placing Mental Health at the Center of National Policy for Harmony between the Healthcare System and Communities” 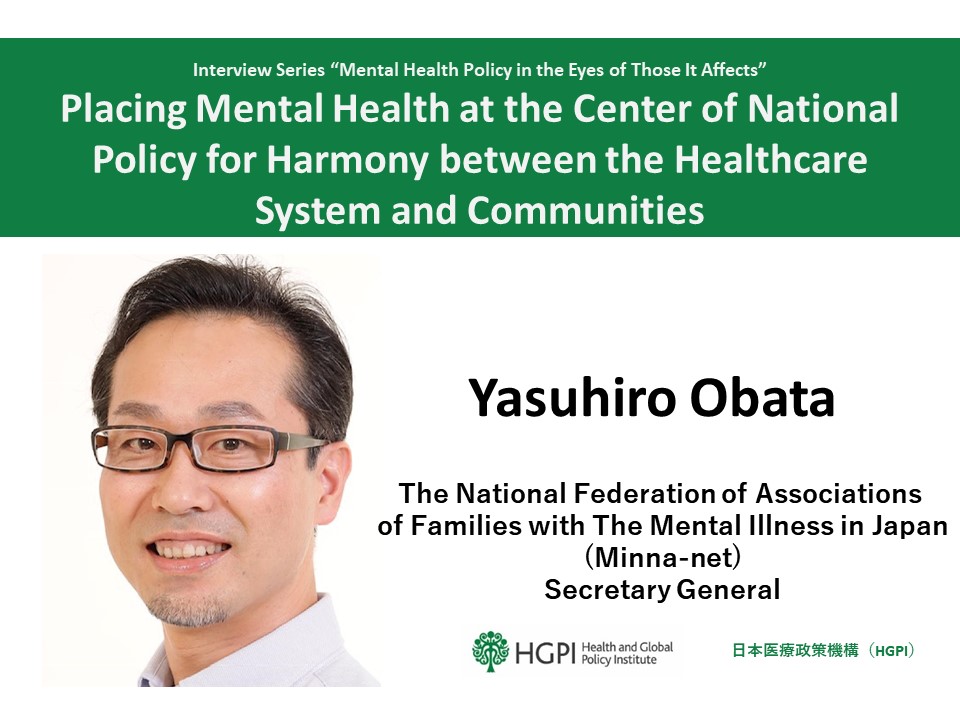 The effects of the COVID-19 pandemic on Mr. Udagawa’s activities and the people affected by mental disorders they involve

Mr. Obata’s opinions on Mental Health 2020 and his response to Perspectives 1-5 and Recommendations

Mr. Yasuhiro Obata (Secretary General, The National Federation of Associations of Families with The Mental Illness in Japan (Minna-net))
“Placing Mental Health at the Center of National Policy for Harmony between the Healthcare System and Communities”

After graduating, I started working at an unauthorized, jointly-run day care facility. Later, I performed quality control and other duties at welfare organizations and private companies before returning to the field of welfare. I currently serve at the executive office of the National Federation of Associations of Families with The Mental Illness in Japan (Or “Minna-net”). I have come to understand that even if approaches or ideas differ from organization to organization, every organization wants to eliminate stigma and prejudice towards mental disorders. My current day-to-day affairs bring me the true joy of uniting with others for a common cause, regardless of the foundation of our activities.

Minna-net has approximately 12,000 supporting members and includes approximately 1,200 family associations nationwide. Many of our members are elderly and 70% to 80% of our membership is age 60 or over. The Coronavirus Disease 2019 (COVID-19) pandemic has prevented our members from being able to attend the regular meetings we co-hosted with Waki Aiai, causing many to feel cooped up. While our board of directors has finally been able to bring our meetings online, some of us do not have smartphones or similar tools. While our use of ICT is advancing, many people involved in Minna-net activities are not yet used to using ICT. We are taking care to make sure those people do not get left behind as we advance our activities.

As interest in mental disorders grows, our focus for this fiscal year is on the perspectives of the children, spouses, or partners of people affected by mental disorders. To that end, we are providing information through booklets and other such publications. In the past, our activities were centered around the perspectives of parents or siblings, who made up most of Minna-net membership, so one could say that our current efforts include a wider range of people.

In September 2020, we released a community site called Minna-net Salon where people can easily share worries and problems and engage and connect with one another using anonymous nicknames. Even though we are living through the COVID-19 pandemic, we are hoping to energize our activities to help keep people affected with mental disorders and their family members from becoming isolated.

First, I would like to express my gratitude for the focus on education in Mental Health 2020. Education is essential for sowing the seeds of a society in which there is no discrimination or stereotyping towards mental disorders. It is said that one of the peak periods for people to develop mental disorders is the period up until the second year of middle school[1] (in Japan, ages 13 and 14), so the curriculum used in compulsory education is important to help people obtain accurate knowledge by that age.

Furthermore, I feel that it is highly significant that Mental health 2020 evaluates education in Japan while referring to real-world examples from abroad. I think such efforts will help society gain a more mature understanding of mental health and lead to the elimination of stereotypes in the true sense of the word. People at family associations have been the representatives of people with mental disorders and this situation has continued for some time. People with mental disorders have not been placed in the spotlight. I feel that this proposal will also help us to develop a foundation for establishing places like recovery colleges[2] in which people with mental disorders can speak up directly.

While I would like for the content on the hospitalization system and psychiatric healthcare to be slightly more in-depth, I thought the proposal provided wide-ranging and clear coverage of the current situation surrounding the effort to build consensus on foundational issues. One issue we must overcome moving forward is how to best express the wealth of experience and knowledge that people with mental disorders and their families have accumulated in an evidence-based manner through joint efforts with people in academia. I think it is extremely encouraging that the activities of people with mental disorders and community living have been prioritized as an intermediate element for accomplishing that.

[2] Recovery college: Places where people with mental disorders, specialists, carers, and other parties can cooperate in a manner that surpasses individual roles so they can engage in mutual learning from positions of equality.

Building a society without discrimination and prejudice through efforts at the individual level
Ms. Arima (HGPI): What kinds of efforts are needed to create an environment in which people with mental disorders can speak openly with peace of mind?

Mr. Obata: If we do not promote the establishment of reasonable accommodation as a rule within a social fabric in which all surrounding individuals do not discriminate or hold prejudices, we will be putting the cart before the horse. This brings me back to the need for education. People fear what they do not know about or understand. Accordingly, if people who do understand mental disorders are there to say “There’s nothing to be afraid of,” it is likely to help the surrounding people feel more at ease. To eliminate prejudice, rather than relying only on the voices of people in specialist positions, I think it is best for the message to be spread in a very natural way among members of the general public who are close to people with mental disorders. However, that kind of approach is difficult to incorporate into a policy framework, which is where the trouble lies.

Peer supporters can act as mediators between people with mental disorders and communities
Ms. Arima (HGPI): What should we do to promote the activities of peer supporters?

Mr. Obata: In many cases, the phrase “the parties most affected” refers to individuals with mental disorders. However, there are times their family members face shared issues and should also be considered among “the parties most affected.” There are many cases in which people give up on their aspirations, thinking “They’re sick, so it can’t be helped.” I think it is important to provide peer support to encourage people to live with a positive attitude and think, “It’s okay to be sick.”

In addition to their roles as parents, children, siblings, or spouses, family members of people with mental disorders must also be caregivers and supporters on a daily basis. They require support to help them avoid living in fear of the mental disorder or towards the risk of discrimination from the people around them. That support should help them enjoy life on their own terms, live as members of the general public, and do normal fun things from time to time like go on trips or have hilarious conversations that make them collapse with laughter.

I think having peer supporters act as mediators and take the lead to help them join group activities like community circles or social gatherings will make it possible for them to seamlessly build relationships in their communities. Peer supporters should not be put in roles like those of supporters or specialists. Instead, they should provide guidance like friends would.

Perspective 3: Build an infrastructure for community living that provides places to live, places to work, and places to belong.
For people affected by mental disorders, access to housing where one can live with peace of mind is important. Rather than just changing the location of long-term hospitalizations to a home that the person in question never steps outside of, however, I think it is important for housing to be provided in a way that it serves as a base for community living. Because securing housing is particularly expensive in Japan, frameworks must be established so even people in unfavorable economic situations can still secure housing. Within current real estate practices, many people cannot pass the rental application process without a guarantor. This is especially the case for people who are ineligible for public assistance. Government involvement in the guarantor system would significantly improve housing security for people with disabilities.

While making efforts to secure housing, it is also important to establish employment practices that fit the needs of people with mental disorders and enable them to maintain daily living. Employment measures for people with disabilities must be taken without delay, even during the COVID-19 pandemic, so I would like the proposal to request that in clear terms. As we were reminded during the COVID-19 pandemic, jobs given to people with disabilities mainly consist of side roles that are not directly related to the central operations of businesses. In the future, I want efforts to be made to help people with disabilities secure jobs that fit their personal conditions and that allow them to be directly involved in the central operations of businesses.

Use ICT to improve employment quality
Ms. Arima (HGPI): To increase both employment rate and quality, I think it will be necessary to establish places people can acquire skills in the future. How do you think that kind of support can be provided to people with mental disorders?

Mr. Obata: I think we require efforts to provide access to work other than just desk work, because there are many people affected by mental disorders who cannot acquire the skills needed to operate computers and other technology despite their best efforts. In Japan, opportunities for telework are especially limited, so moving forward, I think we should devote our attention to speaking out about what can be accomplished with ICT ourselves and not only rely on industry to do that.

Rather than overemphasizing the family, it is necessary to establish systems that prioritize security for every person affected by a mental disorder and provide them support that is separate from the support provided to families. Regarding hospitalizations that are not based on permission from the person being hospitalized, I would like us to emphasize the need to abolish hospitalizations for medical protection and unify hospitalizations under the involuntary hospitalization system in the future.

With regards to the provision of healthcare, rather than having separate psychiatric units at general hospitals, I would like for psychiatric units to be placed in parallel to general diagnosis and treatment units. Furthermore, we should ensure family physicians in communities are able to respond to mental health-related issues and then establish a process in which they can refer people with difficult symptoms to the psychiatric units at general hospitals. Unity within the healthcare system will lead to unity in communities.

Since its establishment in 2004, Health and Global Policy Institute (HGPI) has worked as a non-partisan think tank under the guiding principle of helping citizens shape health policies by generating policy options. Through conversations with multi-stakeholders including members of the public and parties most affected in Japan and abroad, HGPI amplifies the voices of citizens in proposals and statements in a global context to contribute to the realization of evidence-based health policies.

As part of this vision, we have started publishing a series of interviews featuring people affected by mental disorders. By incorporating their honest opinions in the aforementioned policy proposal and by disseminating their perspectives in both Japanese and English, we will contribute to the creation of mental health policy that further improve conditions and quality of life (QOL) for people affected by mental disorders in Japan.