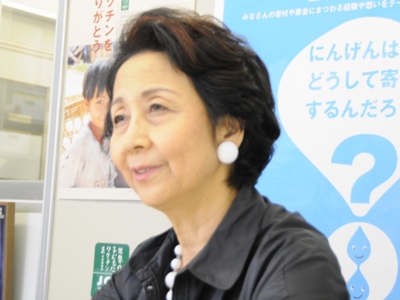 Getting Started
“There must be some strong idea or passion that stirs us to action.”

Everything started from my own idea. Having grown up in the immediate post-war era, when Japan was receiving assistance, I always thought that once we in Japan were able to, we should do something in return to help children elsewhere in the world. With this idea in mind, but yet to decide how I could take effective action, I saw Dr. Isao Arita in Kumamoto, who served as leader of the WHO smallpox eradication project, and was surprised at the reality explained by him and decided to support his wish to convene a meeting, especially in funding it. The “Children’s Vaccine Initiative” meeting in Kyoto was convened in November 1993. By the time the meeting was held, I was surprised to learn that one dose of poliomyelitis vaccine cost a mere 20 yen, and I felt that the knowledge that such a small sum could save the life of a child would be a great thing to share with potential donors; those who wanted to do something for children in developing country but didn’t know what they could actually do to help. People just like me!
Many people at the meeting were insisting that contributions totaling 10 billion yen would be needed for the eradication of polio, and that establishing a private fund-raising body was therefore necessary, yet nothing was being said about who would actually do this. There and then, I resolved to lead efforts in Japan and volunteered to set up an organization to raise funds for vaccinations.

Setting Up Our Activities
“Since I had no role model or precedent to refer to, I made decisions on activities by always considering what I would expect or want to see if I were making a donation myself.”

Fortunately, many people were in agreement, and we were able to launch Japan Committee “Vaccines for the World’s Children” the following January, but since I was practically the only member I found myself having to do everything. To begin with, which country’s children should we send vaccines to? To determine this, I started visiting developing countries in Asia to make observations. Since each developing country had instigated its own National Immunization Day for polio eradication, when every child aged 5 or under was inoculated with live polio vaccine, I traveled around each country at that time, carefully observing the vaccination efforts and lifestyle conditions in general. Of all the countries, I was strongly attracted to the honest, hard working people of Myanmar, and really felt that we could achieve something together.
Once I’d settled on delivering vaccines to Myanmar, I then had to consider how this could be done practically and reliably. To actually deliver the vaccine to each village healthcare center required far more than simply collecting money and purchasing vaccine. Refrigerated storage is needed for the vaccine on-site, a generator is needed to cope with the frequent blackouts, and a motorized bicycle fitted with a cooler box is required for final delivery to the healthcare center. Thus, we needed to prepare not only the vaccine itself but also an entire cold chain logistics network for its storage and distribution. And, of course, in the beginning, I hadn’t given a thought to any of these things. But, by visiting every year, observing how people were doing, listening carefully to what they had to say, putting myself in their shoes and asking again and again “What else is needed?”, I was able to build up our activities little by little.
During my on-site visits, it was also essential to foster strong partnerships with the Myanmar Ministry of Health and the local offices of UNICEF and WHO. In particular, UNICEF was very welcoming and supportive of our activities. Because we had the Executive President of the Japan Committee for UNICEF (currently Vice President), Mr. Yoshihisa Togo, also serving as JCV’s Deputy Director, we could cooperate very closely with UNICEF in both Japan and Myanmar.

Boosting Donations
“Many people see international cooperation as something far beyond their reach, and there are many who feel there’s nothing they can do themselves. At the same time, however, there are tremendous numbers of people who want to help in some way.”

Initially, JCV’s funding consisted of the fees from my public speaking appearances, but that soon proved to be insufficient and I realized a more systematic method of generating income was required. Our first effort was to collect telephone cards. Thanks to a trader who paid 7 yen per card to sell on to collectors in Europe, we were able to convert the millions of used cards collected each year into revenue. This method seemed to fit well with the Japanese spirit of “mottainai”, or not wanting anything to go to waste, and the scheme expanded significantly by word of mouth alone. As our income increased, we became able to focus efforts more on generating publicity. We were extremely fortunate in gaining the approval of the President of the Japan Advertising Council, Mr. Keizo Saji (also Chairman and CEO of Suntory), and thus receiving the Council’s support for 10 years. Through our television commercials, we could convey the message that “Lives are saved with Vaccines”, which had a really big impact, providing a big boost to donations as a result.
A key principle of fund-raising is to accumulate a lot of donations, even of small amounts. If individuals are free to give whatever they feel is reasonable, the number of givers will grow, and thus donations will increase overall. Thus, to make it easy for people to give as much as they felt able to, I really exercised my mind to develop a method for quick and easy donating. There’s little hope of collecting substantial donations if people actually have to visit the bank or post office and complete the necessary paperwork. Instead, it’s essential to have a system that makes it easy for people to donate with just a single phone call, or now via the internet or mobile phone. With this system in place, potential donors can easily donate, and the number of donations will really take off.
It’s important to also keep thinking from the donor’s perspective even after collecting their donation. It’s by continually asking myself “What if I were donating…?” that I’m able to come up with ideas for making it even easier to donate, for preparing more precise reports of our activities, for informing donors more effectively about the on-site situation, and so on. And each time I implement one of these ideas, I can win a little more public support for our cause. Moreover, I believe JCV enjoys an advantage over larger organizations that are active in various fields in that our activity is extremely easy to communicate and understand: we specialize in providing vaccines to specific countries. Being able to inform donors of the activities we’re visibly undertaking both satisfies and reassures them, and this in turn leads to continued donations. Like this, small organizations need to turn their small size to their advantage.

“My Rule”
“Making your own rule: A first step toward a revolution in the culture of giving.”

In fact, donations really skyrocketed in 2008, thanks to the impact of our “My Rule” campaign featuring SoftBank Hawks pitcher, Tsuyoshi Wada. The idea of making one’s own rule or resolution for donating struck a chord with many Japanese people, and we were approached by large numbers of both individuals and corporations saying they wanted to donate in a similar way. For people who wanted to donate but until then had no idea about how they could or should go about it, we could clearly communicate through this advertisement that it’s good to be doing something yourself and important to continue with it according to the guidelines you’ve set yourself. I believe that such a system, where people have their own incentive to donate, for their own satisfaction or even enjoyment, without feeling pressured to do so, can quite simply be described as a revolution in giving. 20 years ago, everybody blindly followed the same course of action, but we’re now in an age where people want to make their own resolutions and donate according to their own desire and satisfaction. I really wanted JCV to contribute even more to this transformation of Japan’s culture of giving, and so we immediately launched the “My Rule・My Reason” essay contest campaign in the autumn of 2008. I hope more and more people come to want their own rule!

The Potential of Advocacy
Up until now, we’ve been able to do everything completely by ourselves without any need to rely on government support, and so we’ve never really given any thought to making proposals to our government. Having said that, as we’re now looking to expand our activities in Laos, I believe it would be effective to build stronger partnerships with the Ministry of Foreign Affairs and other government bodies in relation to ODA. In addition, until now, we’ve focused entirely on collecting donations from the public, but if the government were ever to call on JCV’s expertise in such areas as Japan’s changing culture of giving or the public’s current concerns, then I think we would contemplate entering into some form of advocacy activity.