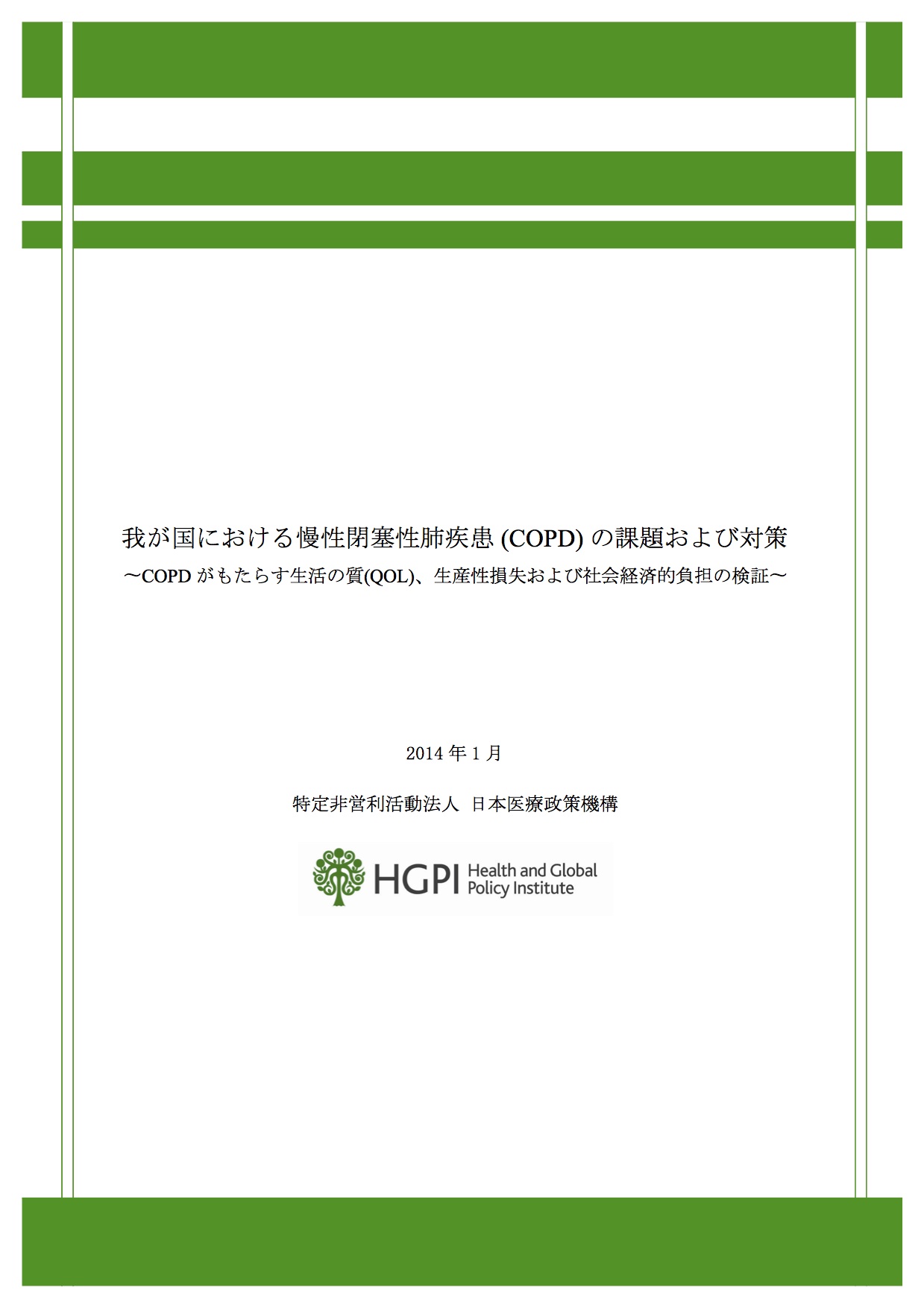 Chronic Obstructive Pulmonary Disease (COPD) is expected to become the third leading cause of death in the world in 2030 by the estimation of the World Health Organization (WHO). In Japan, the mortality rate is also expected to increase. Worsening of quality of life (QOL) is believed to have an implication on the productivity of the workers with COPD. However, we never really have a good grip of how much producitivity lost with the different degrees of COPD symtoms, nor we have a good understanding of the social economical burden of COPD in Japan. This study aims to clarify 1. The actual lost of productivity in COPD patients, 2. The affects on QOL, and 3. The prevalence of potential COPD patients.

1. QOL decreased by the level of severity.

Severity of COPD is classified as non-COPD, potential COPD, and diagnosed COPD in this study. The QOL scores of the participants showed that the QOL significantly decreased by severity of COPD. The results remained the same after adjusted with the confounding factors for age and sex.

2. The lost of time in COPD patients is significantly more than the healhty people.

3. The medical cost and production lost of COPD patients is at least 2,000 billion yen.

It is shown that the medical cost on COPD patients is 1.584 billion yen, cost of production lost is 496 billion yen, adding up to a total cost of 2.080 billion yen lost. It is believed that the total cost of lost is much more larger after incorporating the lost outside the work and the productivity lost of the potential COPD.

1. Establishment of a system for early dection and treatment of COPD

Screening by simple spirometer and questionnaire is effective in the early detection of persons with suspected COPD, however it is not regularly used because it is not an essential item in the health examination. Future policy needs to establish a system for early dection and treatment of COPD, so that we can have a more effective health care screening.

Intervention by health professionals is essential to develop a proper care provision system and the treatment of COPD. However, there are very few respiratory specialists nor certified COPD nurses compared to other fields in Japan. With the increase demands in COPD care, it is essential to train more specialists and nurses in the relevent field.

3. Promotion of collaboration system for the relevant stakeholders

Following the example of diabetes, where the academic and medical association join hands in diabetes management through promoting dialogues and equipping medical doctors for diabetes management, COPD had also made its move in recent years such as the establishment of “Japan COPD management conference”. We expect to build a mechanism that tackles local issues through such collaboration of relevent stakeholders.

The level of populational awareness of the word COPD is hope to increased from 25% to 80% through the promotion of Healthy Japan 21 (Second). The word of COPD needs to have a wide recognition as it helps to lead to early dection of the disease. Also, it is necessary to have a right perspective on COPD among the health care workers and relevant health sectors.