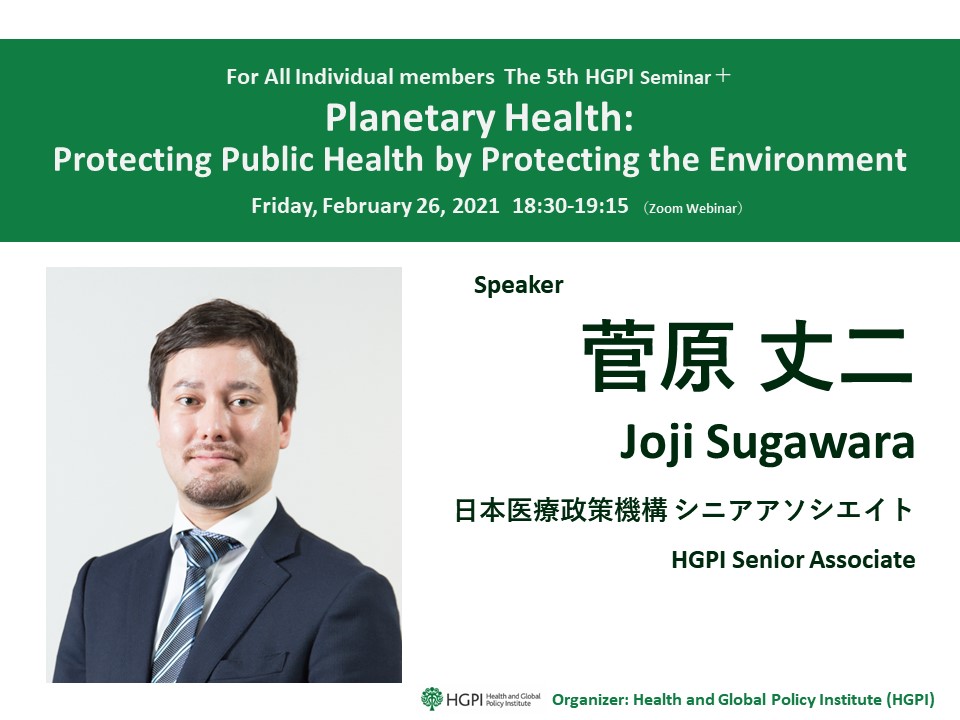 Thank you for your continued support and understanding of HGPI.

HGPI operates with financial support from foundations and companies as well as individual members both domestic and international. Your continued support enables HGPI to continue its activities as a non-profit, non-partisan think tank.

This year, we kicked off a new series of seminars called HGPI Seminar+(plus) for all individual members. HGPI Seminars +(plus) address various topics based on the specialties of individual HGPI staff using knowledge gained over the course of our projects. In addition to various themes in healthcare policy, we hope HGPI Seminars +(plus) will allow participants to learn more about HGPI and feel closer to our operations.

Through talks given by HGPI staff members at our first four seminars, “Pick-up dementia policy”,  “Current Trends and Future Developments in Women’s Health Policy,” “Unhealthy Debate: America’s Experience with the Breakdown of the Public Sphere, and the Coronavirus Disaster,” and  “Global Health Basics: Health Issues Facing Children Around the World,” we deepened our understanding of various issues together with everyone who participated.

Today, we would like to announce the fifth HGPI Seminar+(plus), entitled “Planetary Health – Protecting Health by Protecting the Environment,” which will be held on Friday, February 26, 2021.

At the seminar, HGPI Senior Associate Mr. Joji Sugawara will discuss Millennium Development Goals (MDGs), [1]  Sustainable Development Goals (SDGs), [2] and changes in the international environment surrounding politics, society, and the economy. He will also examine how discussions on public health have changed and the direction of ongoing developments as well as share examples of international events and discussions to illustrate said changes.

The burden that humanity has placed on nature has resulted in various problems: excessive deforestation and overfishing are destroying ecosystems, the release of non-biodegradable plastics into the oceans is polluting the environment, and enormous greenhouse gas emissions have accelerated climate change and caused severe abnormal weather patterns to emerge. Also, although the exact causes are still being investigated, human activity is also thought to have triggered zoonotic diseases such as Coronavirus Disease 2019 (SARS-Cov-2), Middle East Respiratory Syndrome (MERS), Zika virus disease, and Ebola virus disease.

At the upcoming HGPI Seminar +(Plus), entitled “Planetary Health – Protecting Public Health by Protecting the Environment,” we will deepen our understanding of the international trend towards the concept planetary health, in which focus is shifting from solving issues for humanity to solving issues on a global scale.

We would like these seminars to generate interest in healthcare policy and allow us to connect with all supporting members who are active in various fields. Together, we will enhance HGPI’s ability to function as a hub that brings a policy community together to work towards helping citizens shape health policy.

[1] Millennium Development Goals (MDGS): Eight shared goals for the international community in the field of development, such as  the eradication of extreme poverty and hunger, to be achieved by 2015. The MDGs were set in the United Nations Millennium Declaration, which was adopted at the United Nations Millennium Summit held in New York in September 2000.
[2] Sustainable Development Goals (SDGs): As stated in “Transforming our world: the 2030 Agenda for Sustainable Development,” these are 17 goals and 169 targets for achieving a better, more sustainable world by 2030. They were set to succeed the MDGs for the international community, including both developing and developed countries, and were adopted at the UN Summit held in September 2015.

■Venue
Zoom webinar
To apply: Individual members will be notified by email.

[HGPI Seminar +(plus)]
HGPI Seminars +(plus) address various topics based on the specialties of individual HGPI staff using knowledge gained over the course of our projects. In addition to various themes in healthcare policy, we hope HGPI Seminars +(plus) will allow participants to learn more about HGPI and feel closer to our operations.

■Venue
Webinar (For the time being)