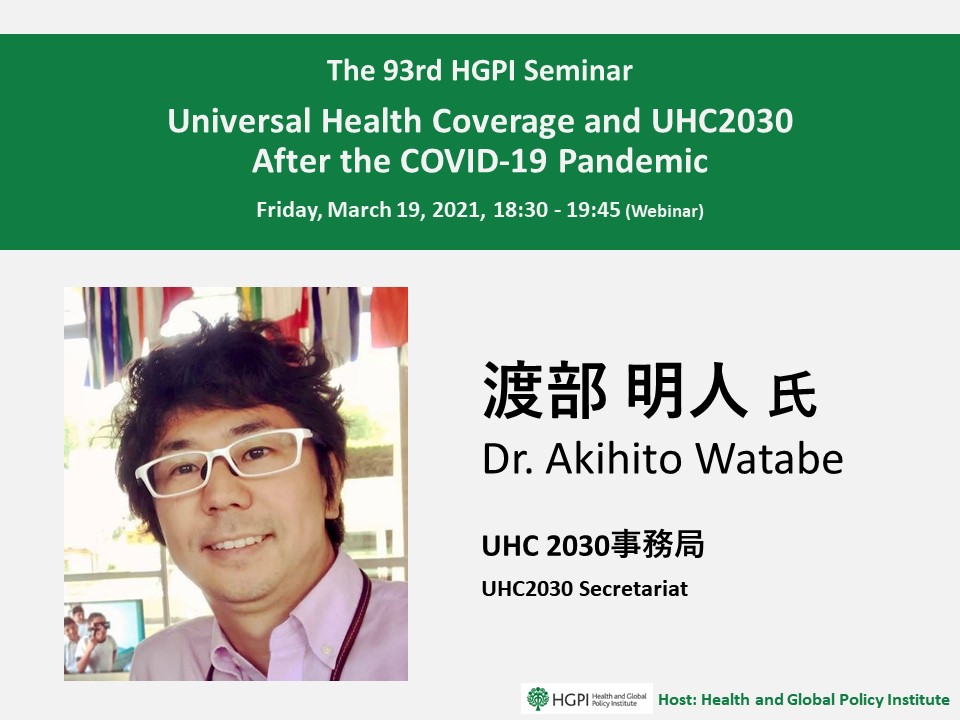 For the 93rd HGPI Seminar, entitled “Universal Health Coverage and UHC2030 After the COVID-19 Pandemic,” we hosted Dr. Akihito Watabe, a member of the UHC2030 secretariat. Dr. Watabe spoke about trends in universal health coverage (UHC)[1], monitoring methods to track progress on UHC, and the role of UHC2030.

The seminar was held online.

■ The SDGs and UHC
UHC2030 is a secretariat established for promoting UHC that is co-hosted by the World Health Organization (WHO) and the World Bank. SDG Indicators directly related to the healthcare field under Goal 3 were included in the Sustainable Development Goals (SDGs) adopted at the U.N. Summit in September 2015. Among those Indicators, Goal 3.8 states the goal of achieving UHC, saying “Achieve universal health coverage, including financial risk protection, access to quality essential healthcare services and access to safe, effective, quality and affordable essential medicines and vaccines for all.” Furthermore, Goal 3.b targets healthcare systems, research and development, and material access to vaccines and medicines; Goal 3.c addresses health financing; and Goal 3.d aims to strengthen capacity to address health risks. Compared to the Millennium Development Goals (MDGs), Goal 3 is broader in scope regarding items like non-communicable diseases (NCDs) and UHC. It also includes more fields and issues spanning multiple diseases.

The SDGs are set for the year 2030 and emphasize UHC as the core driver for achieving Goal 3 within the SDG resolution. Two SDG indicators track progress on UHC: SDG 3.8.1, which tracks “coverage of essential health services;” and SDG 3.8.2, which looks at the “proportion of population with large household expenditures on health as a share of total household expenditure or income.” It will be important for these two factors to be well-balanced. Data on these indicators from each country is collected and shared by and among various international organizations including the WHO and the World Bank, which have published global monitoring reports on UHC in 2015, 2017, and 2019.

■ The movement for UHC and UHC2030’s establishment
The World Health Assembly first adopted a resolution for UHC in 2005 and the WHO published World Health Reports (WHRs) in 2008 and 2010. However, these developments were the result of earlier developments in the movement for UHC, such as efforts to promote primary healthcare beginning in 1978 or the growth in popularity of the health system-centered approach that occurred around 2000. The 2008 WHR made statements on ensuring fair and equal access to health services, while the 2010 WHR discussed health financing. Taken together, these two reports paint a full picture of UHC. In 2012, UHC was mentioned for the first time in a UN General Assembly resolution, titled “Global health and foreign policy.” The discussion then moved from Geneva to New York, where UHC received active support from civil society groups which started campaigns for UHC and from countries and organizations who were early supporters of UHC. These included the World Bank, the Government of Japan, the WHO, and the Rockefeller Foundation. Under the Abe administration, the Government of Japan began promoting UHC as part of the “Japan Brand.” Japan worked to persuade other countries to support the inclusion of UHC in the SDGs by providing evidence and indicators. At first, UHC was only promoted in the international community by a few countries such as Japan, Thailand, and France. While they encountered many difficulties when negotiating with other countries, they eventually won enough support to see the inclusion of UHC in the goals. Later, a political declaration on the creation of a platform to promote UHC was presented at the 2016 G7 Ise-Shima Summit. This led to the founding of UHC2030. The following year, heads of state and health ministers took leadership on this issue by expressing support for UHC at the G20 Summit. As a result, the UN accepted the addition of UHC indicators to the SDGs in 2017. The first UN High-Level Meeting (UN HLM) on UHC was held in 2019. A follow-up meeting is scheduled for 2023.

■ The roles of Japan and UHC2030 within the UHC movement
In 2013, the Government of Japan and the World Bank held the Global Conference on Universal Health Coverage in Tokyo. This was followed by the International Conference on UHC in the New Development Era in 2015 and UHC Forum 2017 in 2017. UHC Forum 2017 was co-hosted by UHC2030 and was held to build momentum for achieving UHC and to promote UHC in the international community. Since then, the Government of Japan has held regular meetings on UHC with WHO and the World Bank about once every two years. Progress has also been made on the development of training programs on health financing and on the creation of a UHC handbook for the general public.

The role of UHC2030 is to gather opinions from sources like international organizations, national Governments, and civil society and to promote the efforts of each in an effective and continuous manner. Based on UHC2030’s multi-stakeholder hearings, six Key Asks were specified at the 2019 UN HLM on UHC and many recommendations were included in its declaration. UHC2030 has more than 90 member countries and includes a broad range of stakeholders in various fields. These stakeholders include international organizations, civil society organizations, and private sector entities and foundations. Japan’s presence in UHC2030 is strong. Its participants include the Japanese Government, the Japan Pharmaceutical Manufacturers Association, Sumitomo Chemical Co. Ltd., Takeda Pharmaceutical Company Limited, the Africa Japan Forum, and the Japanese Organization for International Cooperation in Family Planning (JOICFP). UHC2030 also has Japanese members serving as co-chairs, political advisors, and secretariat staff. In addition to providing training on advocacy and accountability within the political process and formulating guidelines for these areas, the activities of UHC2030 include monitoring and reporting on progress on UHC commitments made by the 193 UN member states, providing support in countries where UHC needs to be promoted, and engaging in awareness-building initiatives targeting civil society. Although progress on UHC indicators has been reported in national SDG reviews called Voluntary National Reviews (VNRs), which were conducted by the Government of each country for the period from 2016 to 2020, only 37% of those reviews were evidence-based. To address this issue, UHC2030 has created a dashboard of the state of UHC commitments for each country. In addition to showing progress on indicators and providing necessary information, the dashboard also teaches methods for measuring UHC progress and data collection.

■ Recent achievements in UHC and the impact of COVID-19
Examining the situation surrounding SDG 3.8.1 (“coverage of essential health services”) and SDG 3.8.2 (“proportion of population with large household expenditures on health as a share of total household expenditure or income”) based on the values of the UHC index of coverage of essential health services, approximately 3.5 billion people do not have full coverage with essential health services and approximately 800 million people have reported that their household budgets are strained by healthcare expenses. Furthermore, 100 million people fall into extreme poverty every year due to those expenses. Progress is being made on SDG 3.8.1 with the expansion of basic maternal and child health services and coverage for infectious diseases, both of which were included in the Millennium Development Goals (MDGs). However, broader access to health services increases insurance expenditures, which slows progress on SDG 3.8.2. Therefore, one goal for 2030 is to find ways to control spending while ensuring access to services. The UHC2030 political declaration also includes the goal of “progressively covering 1 billion additional people by 2023, with a view to covering all people by 2030.” At the moment, however, the COVID-19 pandemic has temporarily halted progress on these goals and has led to worsening situations for UHC and all SDGs.

The COVID-19 pandemic is causing unfairness and inequality to grow worse and is making it more difficult for all people to receive healthcare. However, I believe that it also reaffirms the importance of UHC. The report on the 75th Session of the UN General Assembly ranked UHC first in terms of importance in the COVID-19 recovery. By region, UHC was ranked first or second. The fact that the importance of healthcare access gained recognition as a political issue through COVID-19 has been a blessing in disguise. It will be important to achieve UHC as part of recovering from the COVID-19 pandemic. The next step will be to decide which agenda to invest in moving forward.

[1] UHC means that all people have access to appropriate health services without financial hardship including health promotion and prevention, treatment, and rehabilitation. UHC is included in goal 3 of the SDGs.

■ Profile
Dr. Akihito Watabe (UHC2030 Secretariat)
Dr. Watabe graduated from Kitasato University School of Medicine before working as a doctor at the National Center for Global Health and Medicine, and as a public health physician in charge of health promotion at the Ministry of Health in the Republic of Vanuatu with the Japan Overseas Co-operation Volunteers. He then studied health economics and financing at the London School of Economics and Political Science. Afterwards, as a fixed-term employee of the Office of International Health Policy at the Ministry of Foreign Affairs, he was in charge of coordinating Japan’s efforts to lead the promotion of Universal Health Coverage (UHC) in bilateral aid negotiations and UN diplomacy efforts. In 2015, Dr. Watabe joined the WHO as a Health Financing Officer (JPO) and was hired as a staff member of UHC2030, a public-private partnership launched under Japan’s leadership at the G7 Ise-Shima Summit and jointly managed by the WHO and World Bank. Currently, he is engaged in advocacy and education efforts, UN High-level Meetings on UHC, UN UHC Day, the State of UHC Commitment, and other activities to promote UHC in various countries. Dr. Watabe has a PhD in comparative policy research on health promotion and prevention financing and is a social medicine specialist.