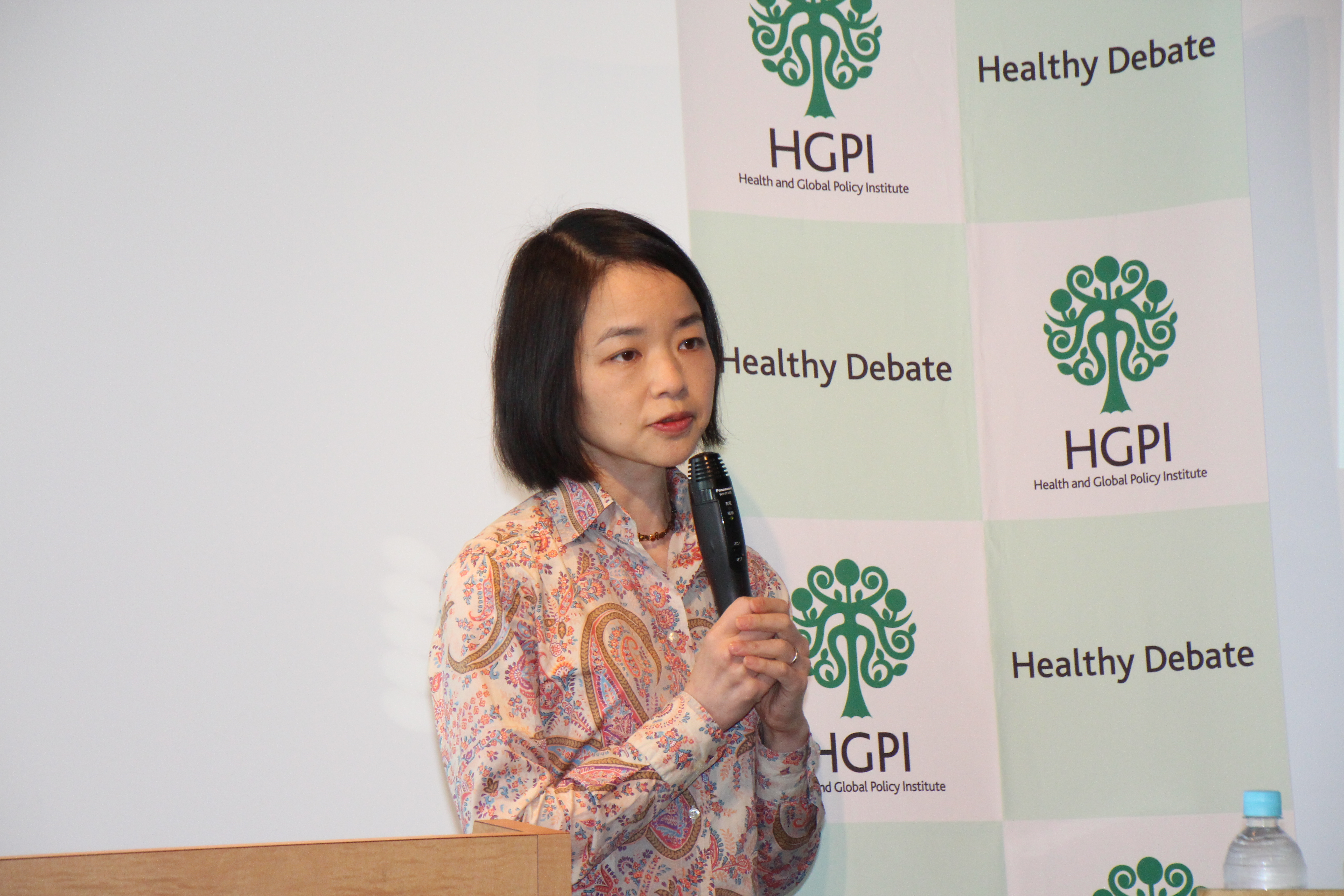 HGPI invited Satoko Hotta, Professor at Graduate School of Health Management at Keio University, and Tadamichi Shimokawara, Managing Director of Silver Company, to speak at the 64th breakfast meeting.
As the population continues to age in Japan, the number of people living with dementia is expected to increase. By 2025, it is expected that one in five elderly people aged 65 or more (equivalent to 7 million people) will be living with dementia. Around the world, many countries are launching national action plans on dementia in order to create societies where people living with dementia can lead better lives. Professor Hotta discussed the United Kingdom’s Dementia Action Alliance initiative in particular. Mr. Shimokawara, for his part, described the “first-person experience of dementia” project currently being developed by his company, which makes use of Virtual Reality (VR) to offer people a simulated experience of dementia, so as to encourage further understanding about the disease among the general public.
The two talks were followed by a discussion with meeting participants on how to build caring communities for people living with dementia, which was one more opportunity for the audience to further enhance their understanding of the disease.

– The current global trend – Helping people with dementia lead better lives
Many countries around the world are implementing national strategies to deal with dementia. Virtually every country in the world shares the view that people with dementia ought to lead better lives. Key to achieving this is improving the Quality of Life (QOL) of people with dementia and their families through sustainable urban planning that creates environments in which they feel they belong and in which they have roles to play. There are four factors of importance to realize that vision:
1. Integrated initiatives to improve prevention, medical, and nursing care efforts
2. Human development
3. Community development
4. Supporting research to guide the development of aforementioned factors

– The UK national dementia strategy
Features related to community-building within the plan are of particular note. In the United Kingdom, a national dementia strategy was launched in 2009. It is founded on three basic principles and proposes 18 targets. Among those, the objective of creating a dementia-friendly community is the most important. Japan referred to and drew inspiration from the idea of a dementia-friendly community when developing its own “New Orange Plan.” The UK plan sets out nine outcome measures (“I-statements”) based on the perspective of whether purported improvements caused by such measures are subjectively experienced as such by people with dementia. This approach radically differs from the Japanese one, which places greater emphasis on achieving the right number of dementia-support personnel and medical staff specialized in dementia. Evaluating progress by gauging the change in the quality of lives of people with dementia as personally experienced by them is one of the original features of the UK strategy. Many other countries from around the world drew inspiration from this aspect of the UK strategy and decided to emphasize the perspective of people living with dementia when evaluating their own national action plans. In 2015, the United Kingdom adopted the goal of making all hospitals and nursing care facilities meet the indicators for dementia-friendly medical environments by 2020. In addition, thanks to the Alzheimer’s Association, the number of Dementia Friends increased to 3 million people, and about half of all healthcare facilities are now working to obtain “Dementia Friendly Community” (DFC) certification.

On another note, many businesses are currently formulating dementia-sensitive charters, and people in the private sector are urged and receiving support to make their businesses “dementia-friendly.” In the United Kingdom, regional governments at all levels are joining local branches of the Dementia Action Alliance (DAA). Local DAA (LDAA) are being established all over the country in order to promote the national strategy. The LDAA in turn involve various stakeholders in efforts such as urban planning initiatives. The DAA is now attracting strong global attention for its role in the promotion of Dementia-friendly Communities (DFCs).

– Dementia Action Alliance (DAA)
The DAA is the train that all stakeholders ride on to reach the final destination of creating DFCs. It is also akin to a university, where stakeholders may learn from one another as they work towards achieving DFCs. In the United Kingdom, the establishment of LDAA is encouraged in all regions. The county of Yorkshire and the city of Plymouth are illustrative cases.

– Case studies from Plymouth and Yorkshire
As part of its research on early diagnoses, Plymouth interviewed people with dementia and their families. The interviews revealed that people living with dementia face problems in their daily living activities, in addition to those related to medical and nursing care, such as in moving and shopping. This prompted city authorities and universities to work together on measures which can help make Plymouth a city where people diagnosed with dementia lead better lives. They proposed about ten such measures. The national action plan promoted these measures, and evaluates them based on indicators associated with the aforementioned “I-statements.” Even libraries have joined the efforts by starting reading clubs open and adjusted to people with dementia. Furthermore, bus companies now issue red cards to be carried by people with dementia who cannot remember their regular stops anymore. By having their destinations written on the card, people with dementia can be instructed by drivers to get off at their stops. All drivers are “Dementia Friends.” Many areas in the city are using coextensive businesses in this way and making action plans to respond to changes in consumer behavior concomitant to the rise in the number of people with dementia.

In Yorkshire, on the other hand, it is the public sector which is responsible for the whole implementation of the national action plan. In particular, the rail transport sector, the county crime prevention office, and other non-healthcare public institutions are very actively involved. An additional special feature of the efforts in Yorkshire is the involvement of research institutions in the gathering of evidence on changes since the beginning of the national action plan initiatives and in the promotion of various activities. All of these actors also assume the role of interlocutors for people living with dementia and help convey their opinions and feelings.

The United Kingdom has set an example on how to conduct dementia-friendly urban planning through the establishment of LDAA in every region throughout its territory, having various sectors participate in the efforts, promote their actions, and evaluate outcomes based on the subjective experience of people living with dementia.

As the number of people living with dementia continues to rise, businesses must realize that dementia will come to affect a larger number of their customers, and must consequently think and elaborate charters on ways to enable this new section of their customer base to properly select products and services. This is not just a social responsibility issue, but a matter of commerce. Accordingly, enterprises must discuss among themselves and internally what they can do to that effect, and initiatives on dementia should receive certification. In Japan, the possibility of DFC-certifying initiatives such as they have in the United Kingdom is now being discussed. In the United Kingdom, DFC-certificates are being created jointly by concerned organizations via licensing by the British Standards Institution. Medical and nursing organizations are also active in this arena. However, medical and nursing care are just one of the eight arenas of action. The reason why people living with dementia face trouble is not due solely to limitations in the healthcare sector, but also to society’s inability to respond to their plight. If, as is the case now, businesses fail to adapt to a changing environment where the number of people with dementia is rising, they could lose out in a society where the number of elderly people and the number of people living with dementia are very high. 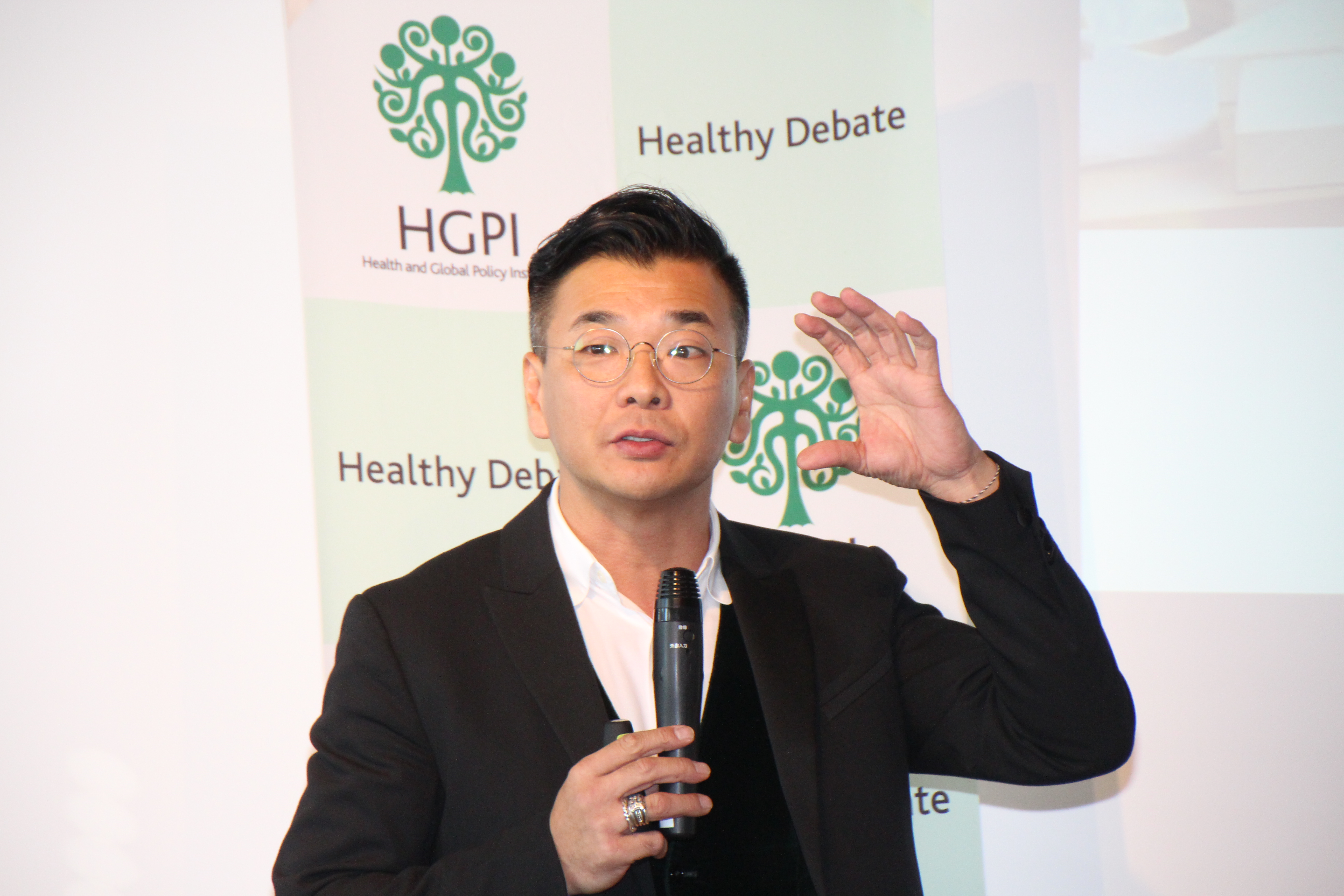 Mr. Shimokawara is a crusader for the use of VR to enable “first-person” experiences of dementia that allow users to experience the world as seen by people living with dementia. He has been promoting this use of VR throughout Japan. Mr. Shimokawara hopes that, through this experience, people will gain the perspective of people living with dementia and become better able to help them. The VR project is being implemented in every part of the country, with many companies introducing it to employees as a part of training programs. Even schools are now holding demo sessions for students. Mr. Shimokawara’s Silverwood company is also organizing demo sessions in the “Osmanthus” residential neighborhood for elderly people, for which it provides support services. At present, the company is working on developing specialized content for medical and nursing students, and thinking about ways to approach the younger generation. Mr. Shimokawa wants middle-school students to be aware that there is much prejudice and misunderstanding with regard to people living with dementia. He hopes to encourage them to think about how a dementia-friendly society could be built. It is his belief that to change society, one needs first to start changing the minds of the young. 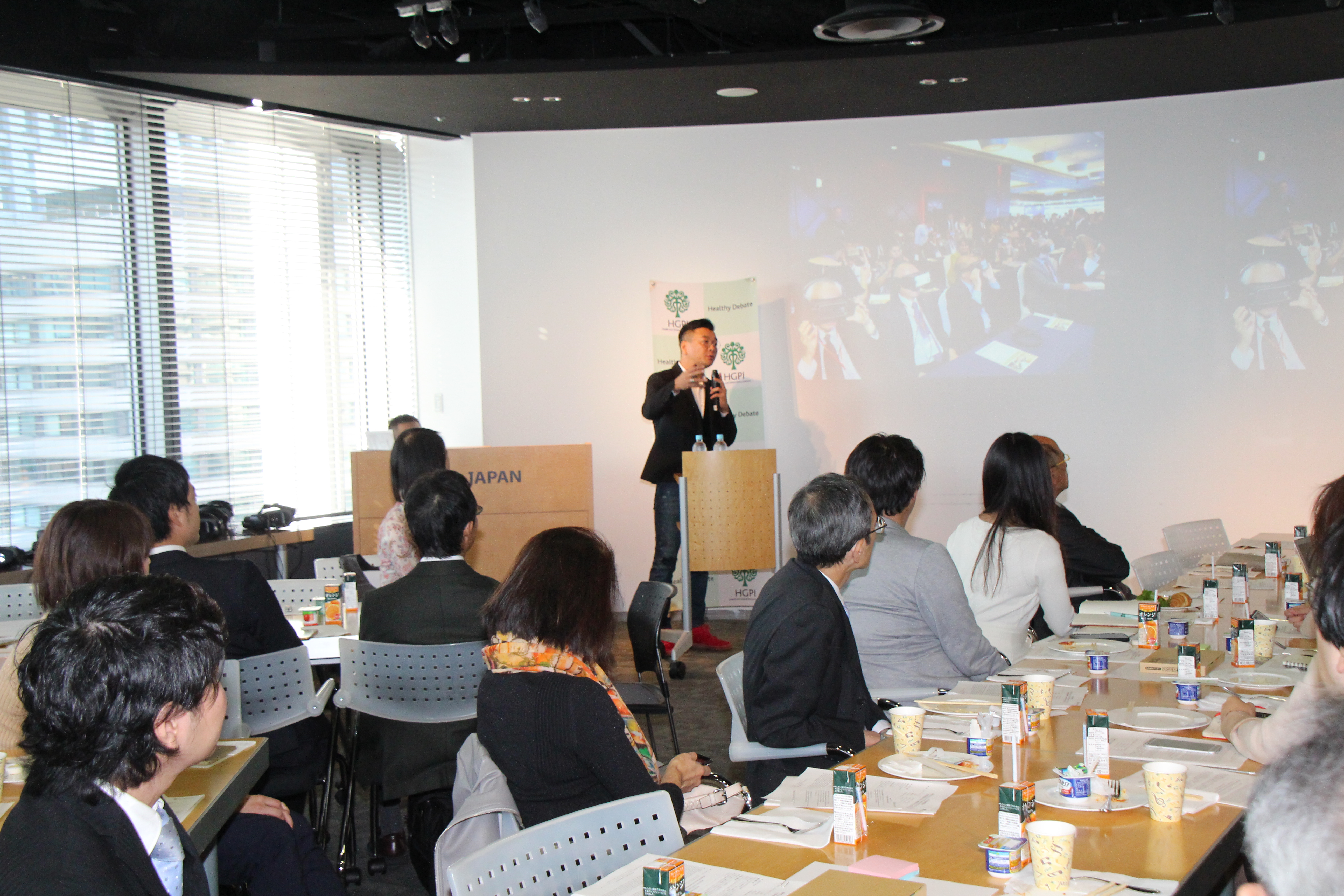 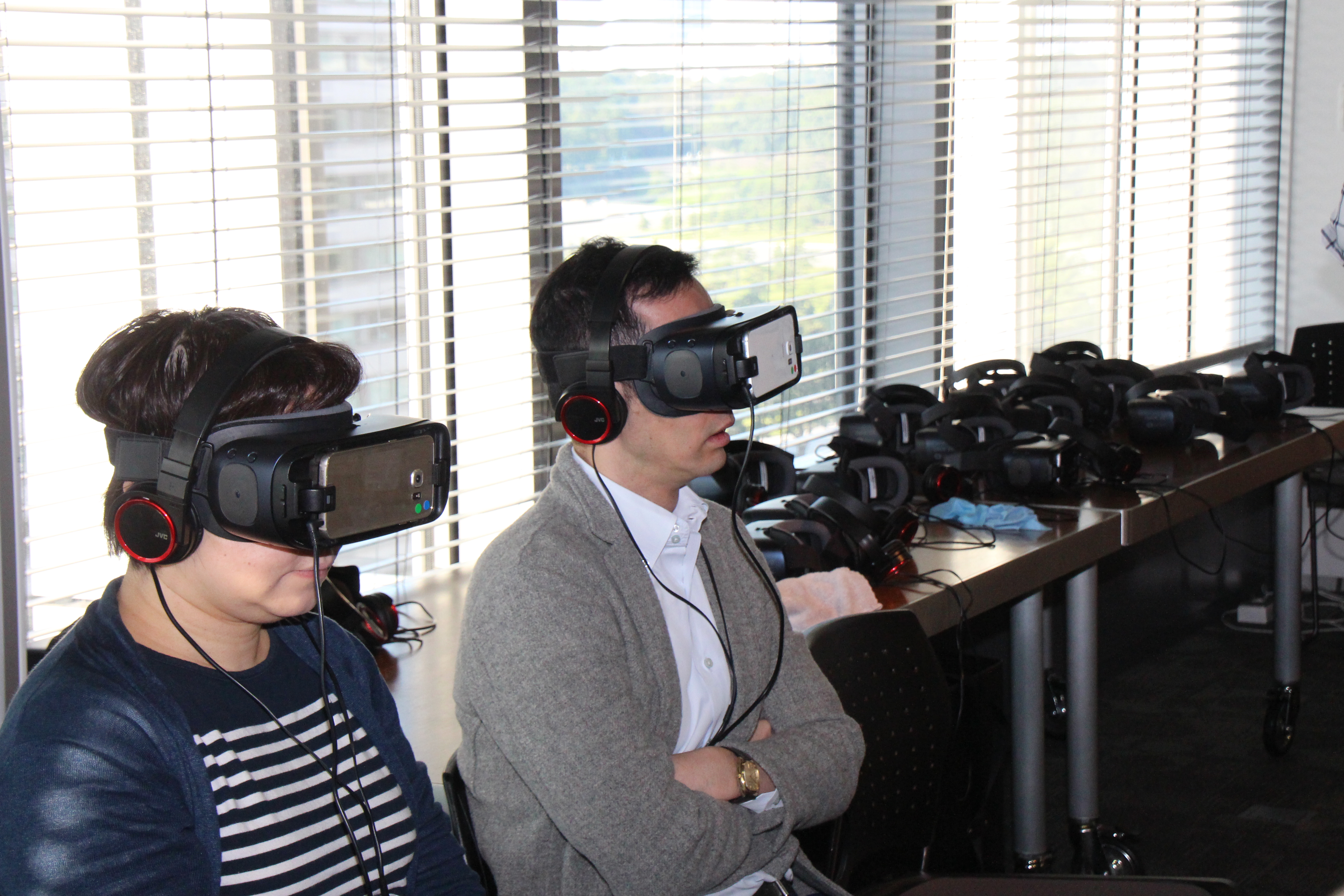 Discussion
Following the end of the two talks, attendees were divided into groups to hold discussions on the theme “I hope that, if I were to be diagnosed with dementia one day, there would already be a dementia-friendly society to care for me.” Each group was asked to present the outcome of their discussion. Participants were able to try the VR experience before and after the breakfast meeting and experience the world of people living with dementia for themselves. Opinions about it were very favorable, and many claimed their understanding of the issue had been changed. 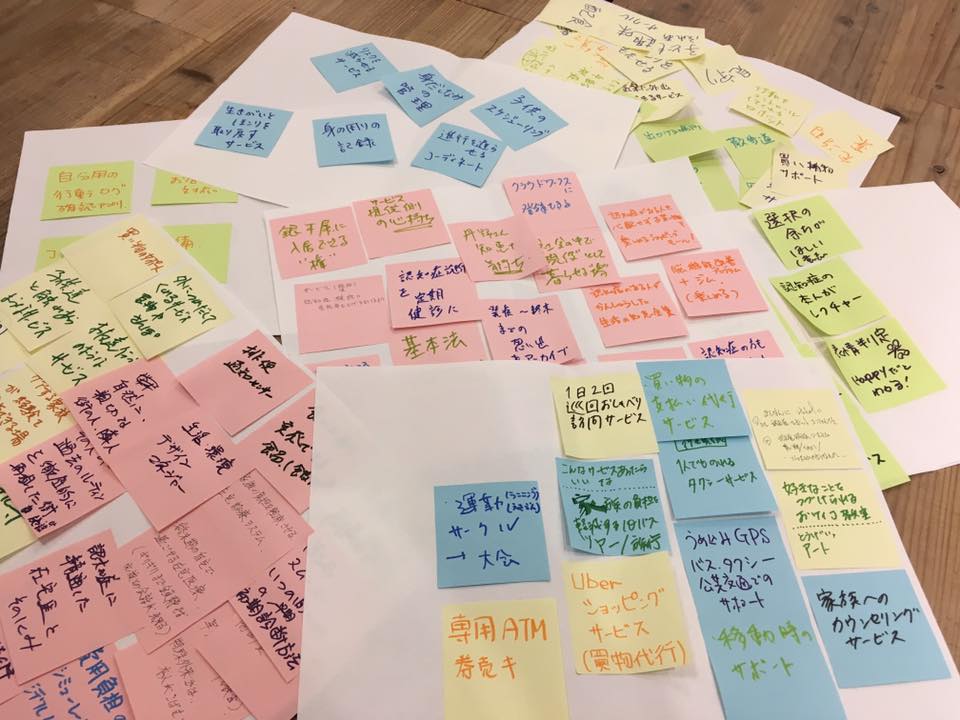 ■About Professor Satoko Hotta
(Professor, Graduate School of Health Management at Keio University)
Professor Satoko Hotta has worked as a Professor of the Graduate School of Health Management at Keio University since April 2017. Prior to taking her position at Keio University, she worked as an Associate Professor in Shaken, the Institute of Social Science, and as a visiting professor at Universiteit Utrecht in the Netherlands. She holds a PhD in International Public Policy and specializes in human resource management and caregiver politics. Currently, she is a member of the Caregiver Fee Subcommittee and Welfare Division of the Social Security Council of the Ministry of Health, Labour and Welfare (MHLW), as well as the MHLW’s Research Group for the Construction of New Frameworks of Support. She is also Chair of the Medical Care Welfare Policy Research Forum, a member of the Secretariat of the Comprehensive Community Care Innovation Forum, and Representative Director of the Personnel and Community Development Research Center. Through these positions, she works to support and accelerate shifts toward more personal and sustainable care and community development. She was selected as a NIKKEI WOMEN OF THE YEAR Award winner in 2015 in the leadership category.

■About Mr. Tadamichi Shimogawara
(President, Silverwood Co., Ltd., Japan)
Mr. Tadamichi Shimogawara is a Board member of the Association of Elderly Housing with Supportive Services, and Secretary of the Elderly Housing Operators Association. After graduating from Orange Coast College in the United States, he founded Silver Wood Co., Ltd., in 2000. He successfully developed and patented a thin and lightweight steel-concrete building frame system which he has since commercialized. Currently, he manages 12 house complexes for older people, including Ginmokusei, senior housing complex offering support services that has been under the direct management of his company since 2011. In 2016, he began a project to develop software that could simulate the experience of having dementia using virtual reality. To date, over 7,000 people have experienced what it is like to have dementia using his software.