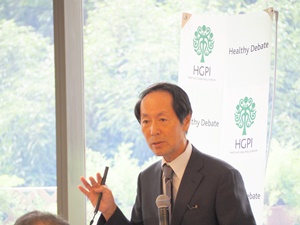 ■ Summary of the Meeting

The national healthcare system is facing challenges such as increasing medical expenditures and the uneven geographical distribution of doctors. There is no single solution that can solve all these problems at once. The provision of medical services in Japan has always been driven by stakeholder discussions, unlike the market-driven system in the United States or the government-driven system in Europe. This is also the basis by which numbers of needed hospital beds or numbers of doctors/nurses per bed is determined. The problem of how to reallocate resources has been a long-term policy challenge. It is a public, philosophical issue.

“The Report of the National Council on Social Security System Reform,” published in 2013, proposed recommendations such as the differentiation of hospital bed functions, the use of big data, and the promotion of task-shifting among medical professionals. These recommendations all directly relate to current discussions on the national healthcare system. The recommendations were fully reflected in the “Basic Policies for 2017″ published in June 2017 at the Council on Economic and Fiscal Policy. The Basic Policies identified the implementation of regional healthcare as a priority issue moving forward.

The concept of community healthcare often focuses on regional disparities in medical expenditures. Prefectural governments will take financial responsibility for the national health insurance system from fiscal year 2018 onwards. In preparation for this, the capabilities of local government authorities need to be strengthened, specifically in the areas of governance and financial management. Discussions on medical expenditures should not be limited to just the topic of the scale of medical costs, but also identify regional disparities. In some prefectures, inpatient expenditures are twice as high as in others. We need to assess the overall context for that and see if there is a valid reason behind such differences.

The amount of medical expenditures per elderly person over the age of 65 is a figure that is closely linked to the socioeconomic circumstances of each community, including the proportion of expenditures that go toward medical costs out of the region’s total budget, as well as the employment rate among senior citizens. Community vitalization is essential for solutions to these financial issues. It is crucial that Japan foster medical doctors who can take an active leadership role in not only regional healthcare, but also their local communities. A new system for specialist doctors will be introduced in FY2018. Japan’s system currently allows medical doctors to work in any clinical department without having a specialist license, except for anesthesiologists. In Europe and North America, on the other hand, doctors need specialist licenses to do specialist work. Specifically, in the United States, the supply of medical services is regulated by market mechanisms. This is true of the number and allocation of specialized doctors as well. In addition, it is possible for foreign doctors to work in the European and North American markets, which is not the case in Japan. In Japan, there is the concern that too much specialization by the medical workforce will result in gaps in medical services.

Discussion about the specialist system in Japan is still at an early stage. We are not yet at the point where we can do something like base specialist numbers on the principle of competition or create a ceiling for those numbers. It is common for Japanese doctors to transition between being specialists and general physicians over the course of their careers. We need a system in which it would be possible to register as both a specialist and a general physician. In fact, in many communities, it is important for even general practitioners to be equipped with skills related to specific specializations, so it is important for doctors to be specialized in at least one area of medicine, and also be able to work as a general practitioner. With that in mind, Jichi Medical University has been playing a vital role in promoting community medicine in Japan. Our graduates have been actively involved in regional healthcare, and are working to build networks in rural and remote areas.

Another hot topic in Japan right now is the training of nurses for specific medical acts. However, training courses related to this currently require six months, and cost a great amount of money. We need to make use of support systems for human resource development to solve this problem. There are already prefectural support systems in place such as the Regional Medical and Nursing Care General Maintenance Fund or the Educational Training Benefits system, but public awareness about these systems is low. Information on these systems should be shared further among local government authorities and stakeholders.